Actress Amber Heard is expected to take the stand this week in the high-profile defamation trial between her and ex-husband Johnny Depp.

The defamation trial, now in its fourth week, pits the actors against one another in a Fairfax, Virginia, court. Depp is suing Heard for $50 million, while Heard has filed a $100-million countersuit against Depp.

Jurors have listened to witnesses describe scenes of alleged verbal and physical altercations and drug abuse they say persisted before and during the couple's tumultuous marriage, which lasted under two years and ended in 2017. In nearly a week of testimony, Depp admitted to battling drugs and alcohol but said he was never violent toward Heard or any other woman. Using text messages, photos, and recordings, Heard's legal team tried to characterize Depp as a drug-addled domestic abuser.

The catalyst for this current legal battle was a 2018 op-ed Heard wrote in the Washington Post that suggests she was victimized by Depp, although she never specifies anyone by name.

On Monday, Travis McGivern, a security guard for Depp, testified he witnessed Heard punch Depp on the left side of his face during a prolonged argument at their Los Angeles apartment.

"The initial look on his face mirrored mine," McGivern told jurors, describing the aftermath of the alleged attack, "a look of shock."

McGivern claimed he often had to usher Depp from fights between the couple that turned ugly.

"The f-word is my favorite word, and it was thrown around to a point where I was uncomfortable," he said. 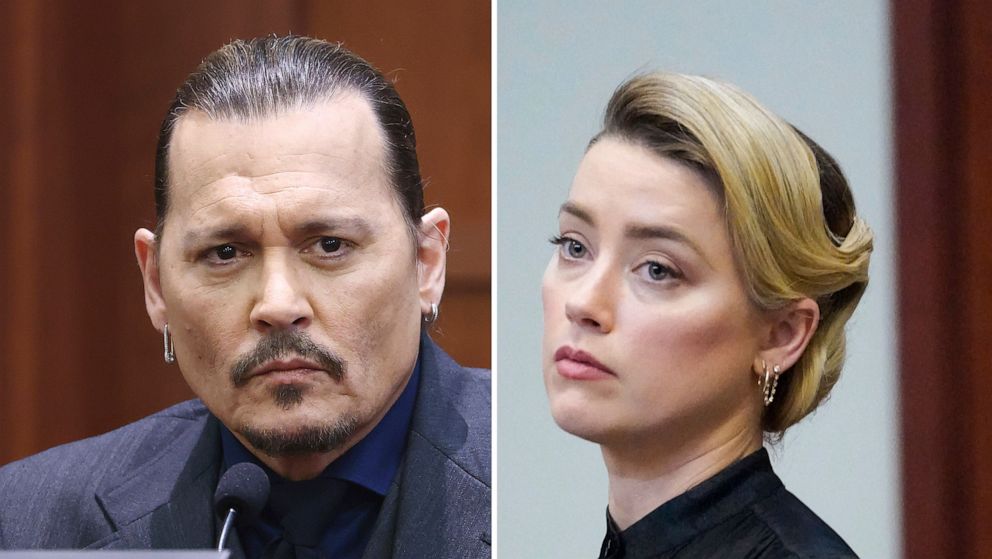 During one alleged fight at their penthouse in downtown Los Angeles in March 2015, McGivern claimed Heard threw a can of Red Bull that struck Depp's back. He said she also threw a purse at Depp and spit at him.

McGivern said Depp stormed into her closet and threw her clothes and shoes down the stairs in response. After Heard allegedly punched Depp, McGivern said he physically moved Depp out of the apartment.

"I told him we were leaving. It wasn't up to him at that point," he said, adding that it "was my time to get him out of there."

Under cross-examination from Heard's attorneys, McGivern denied that Heard punched Depp because the actor had pushed Heard's sister. The security guard testified he witnessed Depp consume marijuana every day, which made him "super mellow," as well as cocaine sometimes. Heard, he said, "drank fairly regularly."

Testimony from Jack Whigham, Depp's manager, focused on the effect he claims Heard's Washington Post essay had on Depp's film career, notably his failure to continue in the lead role of the "Pirates of the Caribbean" franchise.

Whigham told jurors the December 2018 essay was the first time he personally "heard allegations of sexual abuse" concerning Depp. He said it led to numerous fallouts for the actor. The first, he said, was "Minamata," a film scheduled to go into production the following month. To "save the movie," Depp's $3 million salary was reduced.

Whigham said he could not convince the "Pirates" producers to keep Depp in the sixth installment of the successful franchise. For their part, Heard's team claimed there was no evidence Depp was to star in a sixth "Pirates" movie and that Margot Robbie reportedly replacing Depp as the big star in a possible sixth Pirates film had nothing to do with the negative publicity from the op-ed.

Between when Heard's essay was published and October 2020, "it was impossible to get him a studio film, which is what we normally would've been focused on in that time period" Whigham claimed.

Under cross-examination, Whigham said he did not see a specific text or email that specified Depp was dropped due to Heard's essay. However, he claimed "it was clear" in early 2019 that Depp was radioactive because of what she had written.

"It reads like a victim's statement," he said of the essay. "And it became a death knell, a catastrophic thing for Mr. Depp in the Hollywood community."

Late Monday, the defense team for Depp presented witnesses who testified how Heard’s op-ed damaged his career while the actress' team tried to deflate those charges by saying Depp’s reputation was failing years earlier.

Heard’s attorneys presented Richard Marks, an entertainment attorney for Depp, a litany of headlines from articles that suggested Depp was a broken commodity in Hollywood before her allegations against the actor became public. Marks told the jury that her op-ed alleging physical abuse “was something different” from articles that portrayed him negatively as a drug user and alcoholic.

The day ended with recorded testimony from Erin Falati, an addiction nurse who testified witnessing arguments between the couple. She said Heard was not suicidal but often turned to friends for support following the arguments. “From a general physical sense, she was always in a safe space,” she said.

She contradicted Depp’s assertion that he was the one who wanted a divorce by affirming her personal notes saying Depp had suggested to her it was Heard who initiated the separation.