"Jeopardy!" champion Amy Schneider is officially in second place for consecutive wins on the iconic quiz show with her 39th victory.

Schneider, whose "Jeopardy!" run began Nov. 17, overtook Matt Amodio's 38-game winning streak with Monday's victory. She is now about halfway to overtaking Ken Jennings' 74-game winning record, which he has held since 2004.

Already the winningest woman in "Jeopardy!" history, Schneider's total winnings is now $1,319,800, the fourth-highest ever in terms of regular-season play. This puts her in striking territory of Amodio, who earned $1,518,601 last year.

Schneider, an engineering manager from Oakland, California, has a ways to go if she wants to overtake the top two "Jeopardy!" earners, as she is still more than $1 million behind James Holzhauer and Jennings, who won $2,462,216 and $2,520,700, respectively, during their original runs. 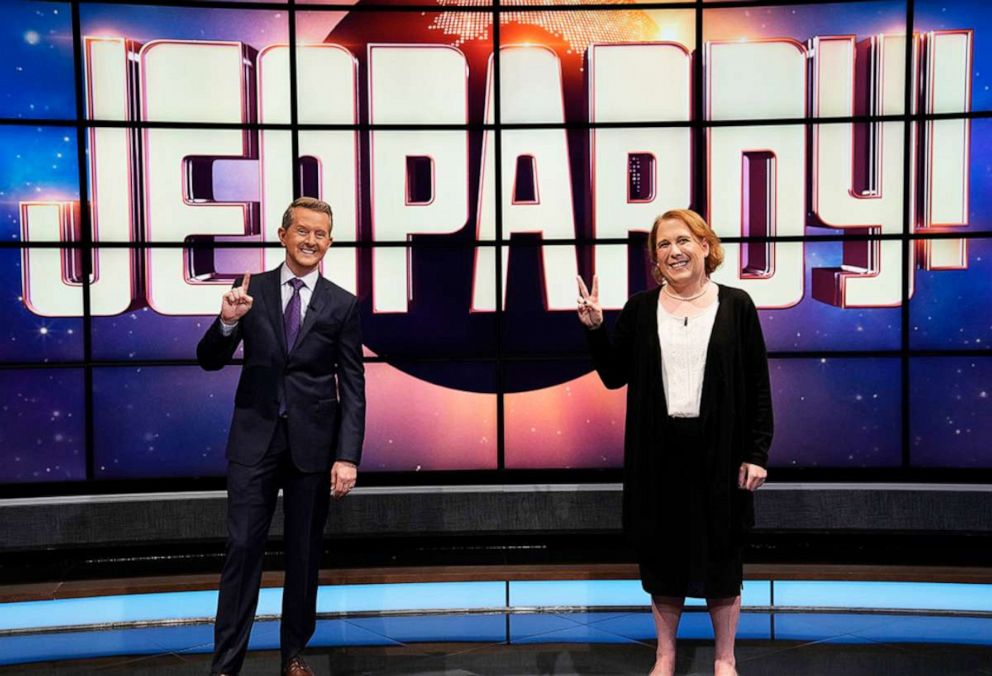 Jeopardy Productions, Inc.
Ken Jennings and Amy Schneider on the set of "Jeopardy!"

In an interview Monday, Schneider told "Good Morning America" that Jennings is "limited" in what advice he can give her so he can "stay neutral" as host. So, he gives all contestants the same tip: "to relax and have fun and enjoy the moment."

Schneider also said she is looking forward to the next Tournament of Champions, which will see her face off against Amodio. "It's going to be really challenging; a lot of strong players there, but it should be a lot of fun," she said.

As for her favorite part of her "Jeopardy!" experience thus far, Schneider told "GMA" it was "being on TV, you know, as my true self, expressing myself and representing the entire community of trans people."

Aside from her performance on the beloved quiz show, Schneider has garnered attention for being the most successful trans contestant in "Jeopardy!" history and for speaking about the importance of trans visibility.

"I didn't want to make too much about being trans, at least in the context of the show. I am a trans woman, and I'm proud of that fact, but I'm a lot of other things, too!" she tweeted about wearing a trans flag pin on the Thanksgiving episode. "The fact is, I don't actually think about being trans all that often, and so when appearing on national television, I wanted to represent that part of my identity accurately: as important, but also relatively minor."

On New Year's Eve, Schneider responded to anti-trans comments with a single tweet. "I'd like to thank all the people who have taken the time, during this busy holiday season, to reach out and explain to me that, actually, I'm a man," she tweeted. "Every single one of you is the first person to make that very clever point, which had never once before crossed my mind."