The “GMA” February Book club pick is “How The One-Armed Sister Sweeps Her House” by Cherie Jones.

Jones’ debut novel is already being described as a visceral story that speaks to race, class and domestic violence.

Set in the tropical island of Baxter’s Beach, Barbados, the story opens with main character Lala’s grandmother Wilma telling the story of two sisters -- one good and one bad. They were each told as children not to go to the Baxter’s Tunnels, a place forbidden by mothers on the island. But when one sister disobeys, she returns with one functioning arm.

Lala carries her grandmother’s cautionary tale with her until she’s an adult. She’s married to Adan, a petty criminal whose thwarted burglary of one of the beach mansions sets off a chain of events which forever connects the lives of four other characters in the book. In the suspenseful novel, a new mother’s baby is found lifeless on the beach, a woman is torn between two worlds and incapacitated by grief, and two men are driven into the infamous tunnels by desperation and greed that may cost them their freedom -- and their lives.

"I'm so thrilled that 'How the One-Armed Sister Sweeps Her House' has been selected as your 'GMA' book club pick for February," Jones told "Good Morning America." "I'm sure you're going to enjoy reading about the other side of paradise and the myth of the one-armed sister." 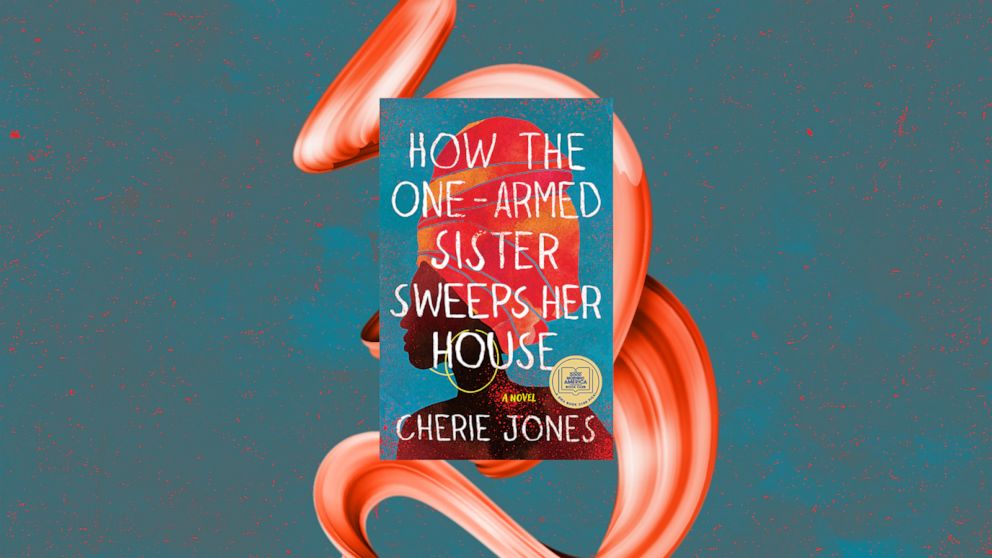 Lala comes home and Wilma is waiting, having returned early from visiting Carson at the hospital. Wilma is still dressed in her going-out clothes, one of the outfits she prefers to be seen in by strangers — a lilac, steam-pleated skirt that falls just below her knees, a pale aquamarine silk blouse tucked into the waist with a broad pur­ple belt, and a navy cloche hat that once belonged to her mother. When Lala walks through the door, Wilma is standing on the stone floor of the kitchen, arms akimbo, eyes wide with relief.

Visiting hours end at six, one of the myriad indignities of hospital­ization at Baxter’s General — having to bid visitors goodbye and get ready to go to sleep with the birds. But today, Carson has fallen into a type of coma way before bedtime, a deep sleep from which the doctors cannot rouse him. Wilma spends the first visiting hour sitting upright next to his bed, and only when she dozes and falls off the chair and lands with her knees still bent at a right angle can she be persuaded to go home and rest. There is not much anyone can do, say the nurses, as dribble oozes from the corner of Carson’s mouth and slimes its way toward the sheets; the doctors are doing tests.

This coma, these tests, are why Wilma is able to take the long walk from Baxter’s General back to the Bridge Street Bus Stand at a stroll instead of a run and still manage to secure a place at the front of a long line of commuters. They are why her steam-pleated skirt has escaped the telltale crinkles of the push and shove and crush of the queue in its collective effort to catch the Route 12 going to Baxter’s Beach, from which she usually alights around 8:30. This evening Wilma has managed to catch the 7 p.m. instead of the 8 and has therefore been spared the usual visiting-hours crowd from Baxter’s General. This evening Wilma has returned home almost an hour early and found that Lala is not there in her bedroom, reading Malory Towers.

“Where you was, Stella? Answer me!”

Lala is, at first, not fazed by the fact that she is already in trouble or that lashes are likely, and her obstinacy makes Wilma’s right eye twitch.

“Your name is whatever I say it is!” Wilma yells.

Wilma does not know whether to believe her — Lala’s hair is intact, her dress is not unusually ruffled, she can look her right in the eyes — it is possible that she is telling the truth.

Wilma removes the cloche hat, which she had kept on until Lala walked through the door, just in case her head had to brave the cold wind to try to find her. Wilma sheds her Chinese slippers and sits down. Suddenly she is too tired to share a beating. She is too tired to go to bed. She is thinking about the prospect of Carson dying at last, and leaving her alone, alone except for Lala. She looks at her granddaughter — the only child of her dead only daughter. This granddaughter has not, up to now, really caused her any trouble. She does her schoolwork so well that her teachers say she can be anything she wants. She says “Yes, ma’am” and “No, ma’am” at the times and on the occasions that Wilma has taught her to. She stays well out of the sight and sound of her grandfather, Carson. What more, Wilma asks herself, can she ask for? The child is not a beauty but, perhaps, thinks Wilma, this will work in her favor. She considers that this is the person who will have to help her in her old age, and so she softens her voice until it is almost pleading.

Wilma tells the story of the One-Armed Sister:

The village vicar and his wife had two little girls. Such beautiful children you never did see — skin yellow and pretty like peanut milk, hair curly and silky like peau de soie, eyes big and light brown with long, long lashes. But although they both beautiful, only one of them was gifted with good sense — the other one was own-way and like to give the mother mouth. So it just so happen that it had an entrance to the Baxter’s tunnels right on the vicarage lawn, at the bottom of the garden. Nobody sure what it doing there but it there nonetheless. The vicar wife have half a mind to get the yard boy to seal it off with stones and cement but is only half a mind and she never actually send the boy into town to buy the bag of cement and the cement blocks and do the job. The vicar’s wife tell her little girls about this tunnel, how they mustn’t go into it, how it have monstersthat live down in there, how any little girls go in there they never come back out. The tunnels is where bad men go when they die, says the mother, men that are too bad to rest easy in their graves down in those tunnels walking about night and day, looking for more badness, harvesting souls for the Devil. The mother tell them, but the little girl with the good sense listen and the one that don’t have any get more curious than ever. This sister question her mother, wonder what in the tunnels that so sweet she warning her away from it, because this good-for-nothing girl already developing a taste for things that her mother tell her not to have, this slack-from-she-born, force-ripe sister already thinking that some bad things real sweet and if something so sweet it can’t be evil. This sister thinking to herself, It not that dark, it not that spooky, what is the use of a tunnel if you don’t get to see where it lead?

Is just this kind of tunnel that this sister decide she must explore, say Wilma, so she ups herself one evening when her mother was taking tea with the doctor wife. It was important matters they was talking, says Wilma, because the vicar’s wife was a good mother, not one to leave her children alone for even a few seconds. But a few seconds is all the Devil need. Pretty soon the vicar’s wife hear screaming so sharp and piteous it shake the teapot on the table with the tea. The vicar’s wife and the doctor’s wife run out and see the good sister holding onto the other for dear life and something they can’t quite see pulling the stupid one by her other arm back into that tunnel. Well the vicar’s wife and the doctor’s wife and the yard boy all grab onto the good sister and they pulling her and she pulling the bad sister away from the thing in the tunnel. And, says Wilma, maybe is only because her husband is the vicar and a man of prayer that they get the stupid sister out, but that monster in the tunnel take her arm from her. Sure as day, when they rescue that sister there is a bleeding stump where her arm used to be, that left arm end in a knot just above what used to be her elbow. She survive, of course, says Wilma, the wicked often do, but she have a stump to remind her what stupid get her. Sure enough, the mother get the yard boy to seal up that tunnel quick-quick after that, but the arm already in there. Curiosity kill the cat, says Wilma, don’t make yourself stupid like the one-armed sister.

There is something about the story that angers Lala, perhaps the fact that Wilma expects her, at thirteen years old, to believe it.

“And none of them went back to find the arm?” she wonders. “Not even the yard boy?”

She has mistaken Lala’s silence for the proof of a scaring, just the kind to keep her out of the type of trouble that long walks at night can bring, so she is picking up her hat and her bag and her belt and getting ready to go to her sewing room, where more work is waiting.

“I bet if it was the other way around, if the good sister was the one in the tunnel, the other one would have gone after that arm and found it for her,” says Lala. “I bet she would’ve.”

“The good sister not so stupid to go in there in the first place,” says Wilma. Her eyes are flashing and she is thinking that maybe she should just have mustered the energy and given Lala a warm dose of licks instead.

“Well I bet it not so bad having one arm,” says Lala. “She can still do things like everybody else, she can still get a husband and some children and a house.”

“Stupid girl,” says Wilma, “how she gonna sweep it?”

Excerpted from 'How the One-Armed Sister Sweeps Her House' by Cherie Jones. Copyright © 2021. Available from Little, Brown & Company, an imprint of Hachette Book Group, Inc. All rights reserved.