"Memorial" by Bryan Washington is the "GMA" Book Club pick for November.

This novel explores the relationship between Benson, a Black day care worker, and Mike, a Japanese-American chef, who live together in Houston and the delicate relationships they have with their families -- particularly their fathers.

"I'm so thrilled to be able to say that my novel, 'Memorial,' is the next 'GMA' Book Club pick. It's a rom-com and it's a dramedy, and its characters navigate the intersections between queerness and race and class," Washington said in a special message.

You may already know Washington from his critically acclaimed collection of stories, “Lot,” which is a favorite of former President Barack Obama. Already named the No. 1 Indie Next pick for November, "Memorial" is a literary event not to be missed. 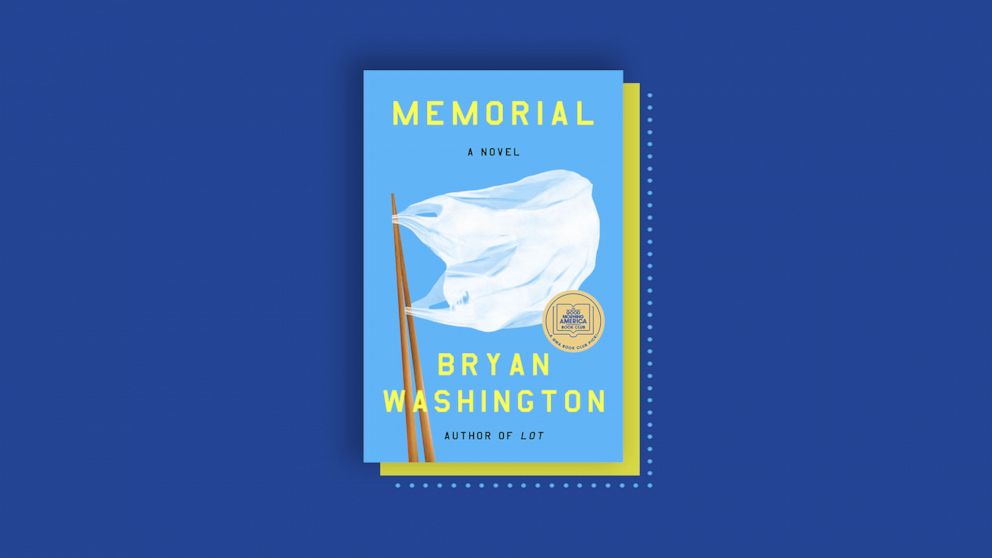 Editor's Note: This excerpt has been edited for reprinting on Goodmorningamerica.com to remove expletives.

Mike’s taking off for Osaka, but his mother’s flying into Houston.

Just for a few weeks, he says.

Or maybe a couple of months, he says. But I need to go.

The second’s that we don’t have the money for this.

Then it occurs to me that we don’t have any savings at all. But Mike’s always been good about finances, always cool about separating his checks. It’s something I’d always taken for granted about him.

Now he’s saying that he wants to find his father. The man’s gotten sick. Mike wants to catch him before he goes. And I’m on the sofa, half listening, half charging my phone.

You haven’t seen your mom in years, I say. She’s coming for you. I’ve never met her.

True, says Mike. But I already bought the ticket.

And Ma will be here when I’m back, says Mike. You’re great company. She’ll live.

He’s cracking eggs by the stove, slipping yolks into a pair of pans. After they’ve settled, he salts them, drizzling mayonnaise with a few sprigs of oregano. Mike used to have this thing about sriracha, he’d pull a hernia whenever I reached for it, but now he squeezes a faded bottle over my omelette, rubbing it in with the spatula.

I don’t ask where he’ll stay in Japan. I don’t ask who he’ll stay with. I don’t ask where his mother will sleep here, in our one-bedroom apartment, or exactly what that arrangement will look like. The thing about a moving train is that, sometimes, you can catch it. Some of the kids I work with, that’s how their families make it into this country. If you fall, you’re dead. If you’re too slow, you’re dead. But if you get a running start, it’s never entirely gone.

So I don’t flip the coffee table. Or one of our chairs. I don’t key his car or ram it straight through the living room. After the black eye, we stopped putting our hands on each other—we’d both figured, silently, it was the least we could do.

Today, what I do is smile.

I thank Mike for letting me know.

I ask him when he’s leaving, and I know that’s my mistake. I’m already reaching to toss my charger before he says it, tomorrow.

We've been fine. Thank you for asking.

Mike figures we’ll make a bed for his mother on the pull-out.

Tomorrow you’ll get the bedroom, he says to her, looking at me.

His mother doesn’t say s***t, but by now she’s stopped crying. She sets her bag on the counter, crosses her arms. We lift the mattress from the sofa, layering it with blankets that Lydia gave us, and when I slip into my room for some pillows I decide not to come back out.

The thing about our place is that there isn’t much to clean. Most of what I make goes toward half the rent, and Mike spends all of his checks on food. Which, when you think about it, leaves plenty for a ticket. That’s plenty of cash left over to fly halfway across the world.

They’re still shouting in the living room when I settle into bed.

Something heavy falls out there. I don’t jump up to look. And once Mike finally comes in and shuts the door, I hear his mother sobbing behind him.

You hardly gave her any warning, I say. She flies in to catch you and you’re f**** flying out.

That’s unfair. You know exactly why.

It’s not fair to her either.

Ma’s low-maintenance, he says. You won’t have to do anything, if that’s what you’re worried about. After a few days, you won’t even know she’s around.

I start to say, Does she even speak English?

And then I swallow it.

And then I ask.

I’m not gonna call that racist, says Mike. But it’s f**** up. For a second there, I thought you actually gave a shit.

He kicks off his pants, toes them into his duffel. He’s gained more weight, but that’s nothing new. It’s never been an issue, never been something I look down on, but for the first time I sort of gag.

Mike catches me. He keeps quiet.

You can teach her, he says. If you care that much. Word by word.

On the seventh or eighth or ninth date, I asked Mike about his parents. I’d started spending some nights at his place. We ordered single-topping pizzas and drank gas station wine.

He looked at me a long time before he finally answered.

Ma grew up in Tokyo, said Mike. Got knocked up in the city. Had me there, moved here, and eventually she went back home.

But you didn’t want to go back with her, I said, and Mike made this face.

No, he said. This is where I live.

But Ma’s adaptable, said Mike. That’s where I get it from.

And your father, I said.

What about him, said Mike.

You didn’t mention him.

I didn’t mention him, said Mike.

It’s still dark out when I wake up the next morning, but Mitsuko’s mincing shrimp. She’s hunched over the cutting board, beside eggs, flour, and honey.

Do you eat, she says.

We don’t say sh** while she’s working. Mitsuko blitzes everything in a food processor. Drops the mixture in a skillet, dabbing everything with soy sauce, folding the batter gradually. I take my pills, watching her do all this, and she ignores me the entire time, working at her own pace.

When I sit on the sofa, Mitsuko stops rolling. I stand to set the table, and she starts rolling again.

Once she’s finished, she fills a bowl with some pickled cucumbers, with a plate for the omelette, leaving another one out for me. We chew hunched over the counter, hip to hip.

So, Mitsuko says, how long have you been sleeping with my son?

Or is it casual, she says.

Not really, I say.

I don’t know how it works, says Mitsuko.

I think it’s the same for everyone.

She says, I’m sure you can tell that Michael and I are very close.

We’ve been together for four years, I say. More or less.

A little more, I say.

But just a little, she says.

Mike’s better with numbers, I say.

It occurs to me, out of nowhere, that my posture is entirely f**** up.

Mitsuko’s is impeccable, even at a lean. So I straighten up, and then I stoop, and Mitsuko raises an eyebrow.

She snorts, and says, My son could not be worse with numbers.

After that, we eat in silence. Scattered Spanish filters in through the window. The kids next door kick a soccer ball against the wall, until their father steps outside screaming, asking which one of them has lost their minds.

While Mitsuko’s focused on her food, I really look at her. It’s clear that, at one point, she was a startlingly beautiful woman.

Then she meets my eyes. I blink like something’s in them.

She says, I realize that this must be strange for you, too.

So you’re a liar, says Mitsuko.

Did my son tell you how long he’d be gone, she says.

A month, I say. Maybe two. I don’t know. We didn’t talk too much about it.

But did he tell you?

How long he’d be gone, I say. Or that he was leaving?

Mitsuko looks me in the eyes. She cracks her knuckles on the counter.

No, she says. My son neglected to give me that information. But this could be a good thing. I needed to get out of Japan for a while. No sense in rushing back to Tokyo to look at a dying man.

So, I ask, you’re staying here? Until Mike gets back?

My voice cracks, just a bit. But Mitsuko spots it. She grins.

Would that be a problem, she asks.

Then what did you mean?

I’m sorry, I say. I really was just asking.

It’s enough for Mitsuko to cross her arms. She leans on the counter, and her hair slips down her shoulders. I make a point to slow my breathing, to let my shoulders droop just a bit.

Then I think staying here is exactly what I’ll do, says Mitsuko. I could use the time off. Your place is filthy, but it’ll work until Michael makes it back.

Remember, says Mitsuko, you’re the one who let him leave.

You’re right, I say. I’m the one who let him leave.

How generous, says Mitsuko, but then she doesn’t say anything else.

Once Mitsuko’s finished her bowl, she drops it in the sink. She turns on the faucet. Reaches for mine. The omelette was delicious, the sort of thing Mike would cook, because he did everything in the kitchen, and I think that this could have been the problem to begin with.

Nice chat, says Mitsuko, and I apologize, but I’m not sure why.