The "GMA" Book Club pick for December is "This Time Next Year" by Sophie Cousens.

The romantic debut novel by the British writer is already being compared to "Love Actually." The book tells the story of Minnie Cooper and Quinn Hamilton through the years on their mutual New Year's Day birthday.

Minnie is convinced her New Year's birthday is unlucky and that's all started with Quinn. Both were born at the same London hospital on New Year's Day and Quinn edged her out by a minute to win the cash prize for being the first baby born in 1990 and he also took the name she was meant to have. Since then, she's had an unlucky birthday streak while it seems fortune has continued to favor Quinn. Their lives finally collide on their 30th birthday after a series of missed connections. Why does fate keep bringing them together?

"This is a heartwarming New Year's themed-romantic comedy that's going to get you in the mood for the holidays," Cousens told "Good Morning America."

"If you love heartwarming rom-coms in the style of Richard Curtis, I think you're going to enjoy this one," she said. "This is a love story, but it's so much more than that. It's about friendship and family, fate and fortune."

Get lost in this romantic read picked by "GMA" with an excerpt of the book below. 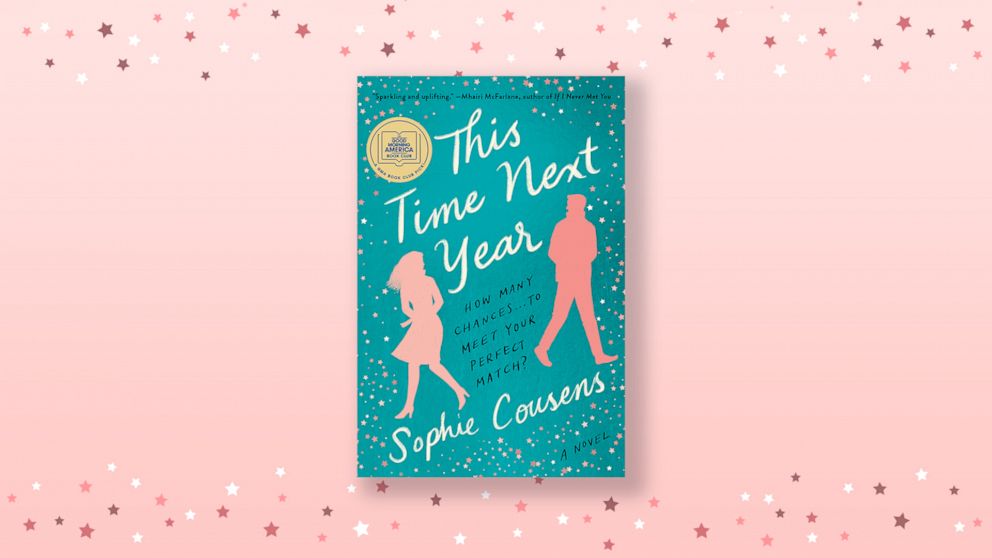 The Night Jam was rammed. Pounding music pulsed through the club and the walls felt sticky with sweat, alcohol, and likely worse. Minnie held tightly to Greg's hand as they jostled through the crowd near the door.

"We're never going to get to the bar," Greg shouted back to her.

"What?" Minnie yelled back, her ears adjusting to the heavy bass.

"We won't be able to get a drink before midnight. I don't even know where Lucy's party is," said Greg.

He pointed upward, indicating they should try to push their way upstairs to the terrace on the mezzanine above. Minnie looked at her watch-it was ten to midnight. So far, this whole evening was only validating her hatred of New Year's Eve. Why hadn't she stayed at home and gone to bed early? Then she remembered that her heating had been cut off-she'd come out to keep warm. And Greg had been determined to go to his work friend's party; she would have felt like a bad girlfriend if she'd made him go alone.

Minnie let herself be dragged through the throng of pulsating bodies. Finally, they emerged from the crush, stepping out into the cool night air where the thumping bass from the club settled to a more manageable decibel.

"Watch it!" Greg said, pushing a drunk guy out of his way. Greg glared at the man, trying to make him notice he'd spilled his beer on someone, but the man was too far gone to care.

"I did warn you about spending New Year with me," said Minnie.

"Will you stop with this jinxed stuff?" said Greg, shaking his head.

"Honestly, it's a thing; bad things happen to me at New Year's. I wouldn't be surprised if this whole building went up in flames before the night's out. Or perhaps a very small asteroid lands right where I'm standing."

"I don't think we're having a terrible night because you're jinxed; I think we're having a terrible night because you dragged us to dinner at weird Alan's house on the other side of the galaxy. Now we're arriving at a party two seconds to midnight when everyone's high on moon juice and . . . come in, Star Command?" Greg lifted a finger to his ear, pausing to listen to an imaginary transmission. "Mission control says we're not even at the right party."

Minnie and Greg had been dating for five months. They'd met at a march outside City Hall, protesting the lack of affordable housing in London. Greg was the journalist covering the story and Minnie was there supporting Mrs. Melvin, a lady she had been delivering food to since the early days of her business. Minnie and her friend Leila had made a sign for the march that read housing is a human right, but they'd used too much paint on the first H so it looked a bit like an M. On the march, Minnie, Leila, and Mrs. Melvin found themselves walking next to a group of people dressed as large cats wearing monocles and top hats. One wore a T-shirt that read say no to the fat cats! Greg ran over to take a photo of Minnie's sign with the fat cats in the foreground. He shook his head, laughing as he snapped away.

"Why are you laughing?" Minnie shouted crossly.

"Maybe the cats are so fat because of all the mousing?" Greg said, pointing to her sign. Leila looked and laughed. Minnie rolled her eyes.

"It doesn't say mousing," she said, hand firmly on her hip.

"It does look like it says mousing, Minnie," said Leila.

"Minnie Mouse, this photo will make a great front page," said Greg with a sly smile.

"You'd better not," said Minnie, trying not to laugh. She liked men who could make her laugh. She was instantly drawn to Greg's sarcastic manner and his angular features. He had a neatly trimmed brown beard and distinctive, dark-rimmed glasses. Once they started dating, Minnie discovered that it wasn't just for work that Greg liked to make up headlines -- he enjoyed captioning everything she did.

When Minnie tripped on a step he would say, "Stunner trips on stairs: Stairs seek legal advice; chances are they're going down!" Or when she took the last banana in his fruit bowl, he'd pipe up in an American drawl, "Fruit bowl homicide still unsolved: Did victim go bananas? Cross the lime? Or was it simply a case of sour grapes?"

Puns were his thing. But Greg wasn't making any jokes this evening.

"Look, you stay here," he said with a sigh, looking around the balcony, "I'll go back through and try to find this private room."

"OK, well, if an asteroid lands in your absence, I can only say good-bye, I told you so, and happy New Year," Minnie replied, trying to sound upbeat.

As Greg walked away, Minnie turned to look out at the London skyline and shivered. The city exuded a sense of serenity in sharp contrast to the atmosphere of the club. The buildings were bathed in silver moonlight and the night sky was still and cloudless. Minnie wished she could transport herself to the top of another empty skyscraper just to lie down on the flat roof and gaze up at the stars, unfettered by other people.

Minnie looked at all the couples pulling together in anticipation of the midnight kiss. She was glad Greg wasn't there to kiss her. She never understood why the end of the year had to be marked with the ridiculous convention of everyone locking lips in unison. People behaving like lemmings, following the herd.

An explosion of fireworks erupted in the sky, illuminating the city beneath in a shower of multicolored lights. Huge bursts of energy ignited in the darkness, miniature universes flaring into existence only to fade to extinction moments later. Minnie wondered at all that effort for such a fleeting display of brilliance. The city buildings below looked still and stately, unmoved by the frenzy of activity above them. On the balcony of the club, the fireworks cast ugly shadows onto the spaced-out faces of intoxicated people as they swayed and swerved through the crowd. Light shone into grimy corners, full of cigarette butts and discarded plastic glasses. A group of girls tottering about in high heels pushed into her and Minnie had to grab the railing to stay upright.

"Happy birthday to me," Minnie said quietly to herself. Then she felt a warm, wet sensation as one of the girls vomited down her back.

By the time Greg returned, the terrace had thinned out and Minnie was sitting on the floor by the railings waiting for him.

"What are you wearing? Where's your top?" asked Greg. Minnie had folded her sodden shirt into her bag and was now only wearing a gray tank top with frayed spaghetti straps.

"Someone was sick on my shirt," she said, hugging her arms around herself.

"Oh dear. Well, it's a bit X-rated like that." Greg cupped a hand in front of his mouth to make a pretend microphone. "Weather report in-there's a storm in a D-cup presenting itself."

"Well, it's this or vomit-couture," Minnie said, pulling up her top self-consciously. She'd never dream of wearing an outfit this revealing in public. She felt very exposed. "Did you find the party or not?"

Greg nodded. He led her back through the club, up another staircase, and then through a double door covered in red velvet, pillared by two bald security guards.

"I was here just a minute ago-we're here for the birthday party," Greg explained. The security guard waved them through, glancing at Minnie's chest as she walked past. Minnie folded her arms in front of her.

The party on the other side of the red velvet door was everything that the room they had come from was not: The music was at a normal volume, the crowd looked beautifully dressed and sophisticated, waiters were topping up champagne and nobody was being sick over anyone. The exterior curved wall of the room was floor-to-ceiling glass, giving an incredible 180-degree view of the city of London beyond. Minnie immediately felt intimidated. This was a rich person's party, a black tie one at that-she couldn't look more out of place. Minnie had cooked for enough rich people to know how they reacted to people like her; they would patronize her or, worse, look right through her. If she had been wearing the right armor she could have done a good impression of someone who didn't care, but her skimpy vest top was not it.

"Greg! You didn't tell me it was black tie," she hissed.

"Black tie is a bourgeois construct, Minnie. I wouldn't wear it to my own funeral."

Greg scanned the room and then waved to a tall blond girl in a tight red dress.

"Lucy!" The girl turned, gave a smile of recognition, then started making her way through the crowd toward them.

"Better late than never, hey," Greg said, reaching out to touch her arm. "This is Minnie. Someone was sick on her shirt on the way in."