Following an emotional group date, Rachel and Gabby changed the rules on Monday's episode of "The Bachelorette" -- with unexpectedly shocking results.

Earlier in the episode, Rachel and Zach were treated to a one-on-one date fit for a Hollywood power couple, courtesy of "Queer Eye" star Karamo Brown, that saw them walking the red carpet to a big-screen peek at each other's lives, set to the music of composer Matt White. The two felt an instant connection with each other that lead Rachel to offer Zach the date rose, which he eagerly accepted.

Erich, meanwhile, joined Gabby for a one-on-one that quickly turned into a two-on-one when Gabby's grandpa John joined them. The trio took part in a sound healing ceremony before going bowling, something a little more up grandpa's alley. Erich passed the grandpa test and won Gabby over during their intimate dinner, after which he accepted her date rose.

Later, the remaining 19 men embarked on the largest group date in "Bachelorette" history, where both ladies got a chance to picture their futures with the men -- literally -- through the lens of legendary photographer Franco Lacosta. 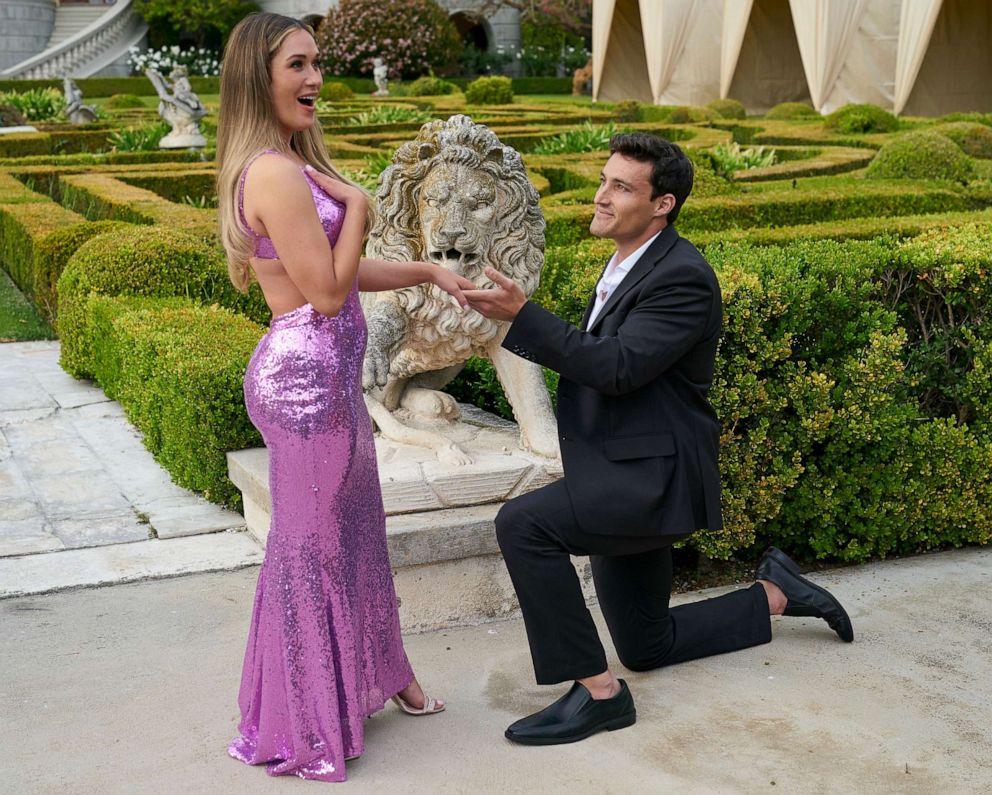 Craig Sjodin/ABC
Rachel Recchia and Tino in an episode of ABC's "The Bachelorette."

The group then headed to SoFi Stadium for a romantic evening. However, the night took a devastating turn for Gabby when she learned that three of the men -- Tyler, Jacob and Hayden -- felt more of a connection with Rachel, with Hayden explaining that he was turned off by Gabby's "rough-around-the-edges" and "goofy" personality. Rachel's date rose went to Aven, while Gabby didn't give out a rose.

That led the Bachelorettes to change the rules, deciding to "move forward on two separate journeys." Gabby and Rachel each had their own set of roses, which they took turns offering to the men each of them wanted to continue dating. Accepting the rose was a commitment to date that Bachelorette solely for the remainder of the competition.

The idea did not end well, particularly for Rachel: Alec, James and Termayne turned down her rose. Despite being placed back in line with a chance to be offered Gabby's rose, they were sent home, along with Jacob.

In a confessional that played during the closing credits, James expressed regret over turning down Rachel's rose and begged her for another chance. Will she reconsider? We'll have to wait until next week to find out.

"The Bachelorette" returns Monday at 8 p.m. ET on ABC.