Some of the most powerful women in the country music industry are joining forces to support female talent in the male-dominated industry.

The new initiative highlights and honors women who have shaped the country music genre along with emerging female singers and songwriters in the industry, and creates a path for them to support artists new to the industry.

The country veterans -- Carlile, Yearwood, Scott, Fairchild and Schlapman -- will each be paired with an emerging female singer or songwriter "to lift up or mentor."

Each pairing will also record three songs together as part of the initiative. Some of the artist mentees include Tenille Townes, Ingrid Andress and Bailey Bryan among others.

Famed singer-songwriter Loretta Lynn, 87, who received a Grammy Lifetime Achievement Award in 2010 for her remarkable contributions to country music along with so many other accolades throughout her career, narrates a video for the campaign.

"I want to help them as much as I can, and I will too. We're going to bring their talents to the table," she adds.

Yearwood told "Good Morning America" that she wanted to get involved with the “Five Decades, One Voice” initiative because, "it’s important to show the industry that we’re here."

Her remarks come after a study was released earlier this year by Dr. Stacy L. Smith and the USC Annenberg Inclusion Initiative, which showed that only 16% of the 500 songs on the Year-End Billboard Hot Country charts from 2014 to 2018 were from women.

A post shared by Annenberg Inclusion Initiative (@inclusionists) on Apr 5, 2019 at 6:01am PDT

The findings backed up long-standing patterns of female country artists being historically underrepresented not only on the charts but also in award shows and on the radio.

"Campaigns like this really kind of keep that conversation going," Yearwood said of "Five Decades, One Voice."

"There's a big thing in Nashville where we’re talking about -- change the conversation, and you can’t make change if you’re not willing to really just keep talking about it," she added. "I think this program really helps keep that conversation going."

Another comprehensive report musicologist Dr. Jada E. Watson released in April 2019 in consultation with WOMAN Nashville, "Gender Representation on Country Format Radio: A Study of Published Reports from 2000-2018," looked at gender equality in the industry.

Worth a repeat with a graphic: When male artists receive 9.7 times more spins then female artists (as in 2018), we have a significant cultural problem! What can male artists do? Stand by their colleagues and demand for change in programming! #DemandChange #SpinMoreWomen pic.twitter.com/jHjYtT8LWM

"The gender gap has always been there but I feel like it kind of ebs and flows -- it gets better and worse throughout the generations for different reasons -- political, socioeconomic -- but right now, we’re in a particular lull in country music ... for women particularly, because they’re not being played on the radio," singer Brandi Carlile told "GMA."

"The sort of philosophy of meritology doesn’t really apply because the same women aren’t being given record deals or booked on festival stages, booked as headliners, and there aren’t enough women in executive positions to give those women record deals ... it’s systemic," she continued.

"It’s dominoed to the point where in country and western music, you only hear a women an hour, maybe two women an hour, played on the radio station," she added. "As a mother of daughters it’s not acceptable for my little girls." 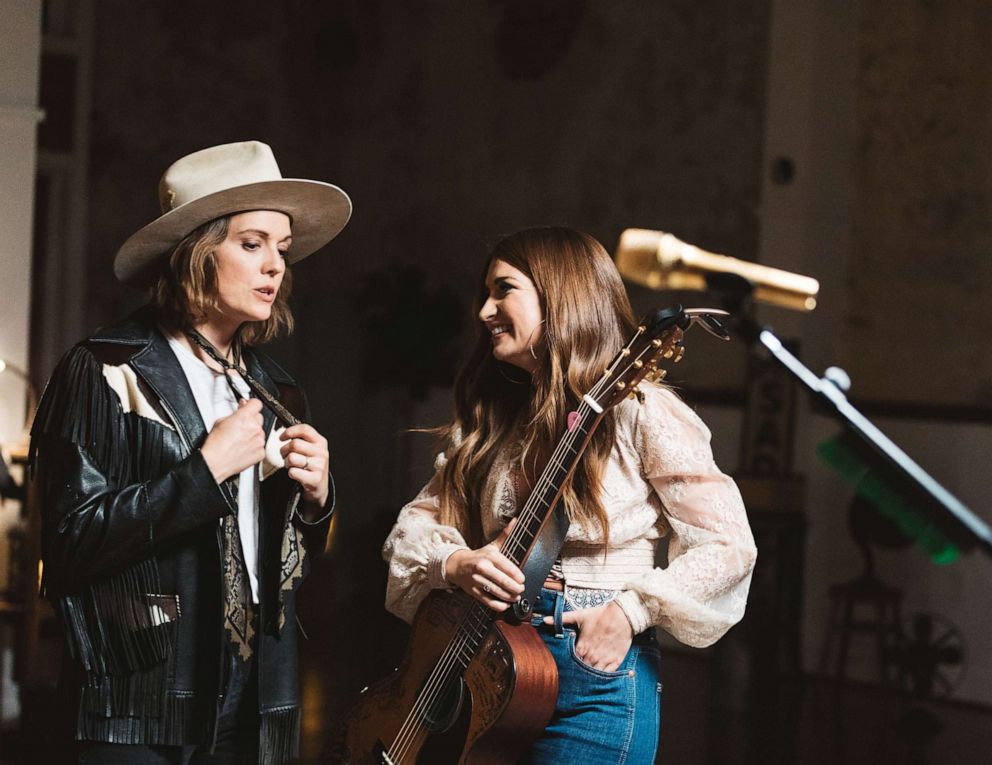 The three-time Grammy award winner said that the industry wasn't always like this in her eyes. "It's so much worse right now than it was when I grew up in the 80s," she shared.

"We had an enormous, plethora of women in country music to choose from ... I had Trisha Yearwood "She's in Love with the Boy," and I had The Judds, Deana Carter, Martina McBride, Tanya Tucker -- all of these women telling stories about being a woman in country and Americana music, and it was really, really important to me. I think it’s really important to all girls."

Yearwood shared a similar sentiment while speaking about her perspective of female forces who shaped the industry while she was growing up.

"Interestingly in the 90s, when I signed with MCA in 1991, there were a ton of women on the radio," she said. "There was Reba, Patty Loveless, The Judds, there was me, Pam Tillis, Martina McBride, Faith Hill ... I could go on and on." 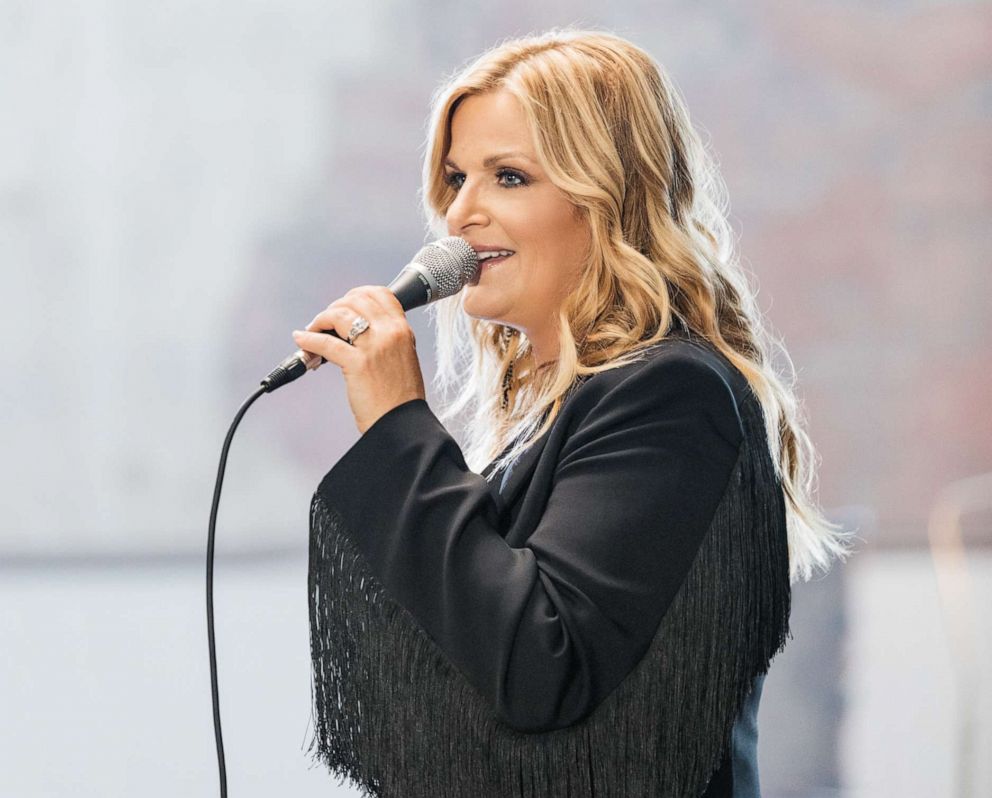 "Then I sort of took a break ... when I came back to Nashville a few years ago there was a question in an interview ... about the lack of women in country music right now, and I had to kind of take a closer look because I really hadn’t been in it -- I'd been writing cookbooks and doing cooking shows and I'm like 'Oh my gosh what happened,'" she added.

Don't accept the woman to your left and your right not having an access to an opportunity that you have.

She said she doesn't have an answer as to why she feels the industry evolved the way it did. "But I will say that the girls are here," she told "GMA."

"Now there's such awareness of the problem," she continued. "All the women past, present and future in this industry are really banding together and I think it’s really cool to see all the generations. It's given us this kind of club that’s made us stronger."

Little Big Town's Karen Fairchild said in order to fix this issue, "We have to ask the difficult questions and demand answers from the gatekeepers."

"We also have to implore country fans to seek out female artist’s music and go see these women perform live," she said. "It feels very important right now to do anything we can to shine light on female artists."

"One voice has power -- two…three…four -- that power will just continue to grow as we add more voices to the problem," Little Big Town's Kimberly Schlapman added. "Historically, that is what has always created change."

Carlile also believes advocating for other women is key to making a change.

"Support each other, don’t compete," she advises emerging artists. "Don't accept the woman to your left and your right not having an access to an opportunity that you have. If you can help it, hold the door open. Don’t let it close behind you."

"For us to be able to shine a spotlight on some other really incredibly talented women that you might not know is a really great gift for us," Yearwood told "GMA."

"Being a cheerleader for each other is one of the most important things we can do. We’re all in this together," Schlapman said.

"I have two daughters, and my husband and I tell them every day that they can do anything they dream up," she added. "I hope they see me affirming other women, and I pray they grow up in a world where this disparity is unheard of."