It was a fight to the finish on the ballroom floor as "Dancing with the Stars" whittled the list of competitors down to the top 12 Monday night. Despite a series of breakout performances where a barrage of celebrity dancers finally hit their stride, actress Anne Heche was sent home.

Heche appeared to have an inkling that her "DWTS" journey was about to end, choosing to share her truth on Monday about how she "moved the needle for equal rights forward" when she openly dated Ellen DeGeneres from 1997 to 2000.

The 51-year-old "Psycho" star proudly danced the Paso Doble to Katy Perry's "Rise" and even pulled a Tyra Banks mid-dance by switching up her outfit that paid homage to the pride flag.

"It's been a blessing to be on this show," gushed Heche, who earned 21/30 as her final score. "And to be able to tell my story. And to be able to have a partner to tell the truth with and to learn with."

"Listen, I live in love, I live in truth and I stood up for it 10 years ago, 20 years ago and I stand up for this very same thing today," Heche said Tuesday morning on "Good Morning America."

3:42
The actress, who was the third celebrity eliminated from season 29, also talked about her claim that her past relationship with Ellen Degeneres cost her a movie deal.

"I'm very proud, very happy that "Dancing With the Stars" allowed me the opportunity to be able to share this story of my life," she added on "GMA."

Heche's departure was preceded by a shocking snafu that took place in the final two minutes of the night when Banks mistakenly sent NFL pro Vernon Davis to the bottom two alongside Heche.

It was actually "Cheer" star Monica Aldama who was sent by the audience to stand before the judges.

"This is live TV," Banks calmly explained before all three judges quickly agreed to redeem Aldama. "I was reading my cards, but my cards were wrong."

MORE: Carole Baskin speaks out after 'Dancing With the Stars' season 29 elimination

Emotions were understandably riding high throughout the night, as the dancers were challenged to reflect on their past and made heartfelt tributes to those who had the biggest influence on their life.

There wasn't a dry eye on the ballroom when Disney Channel star Skai Jackson dedicated her regal and emotional foxtrot to her late co-star Cameron Boyce, who unexpectedly passed away last year at the age of 20 following an epileptic seizure. 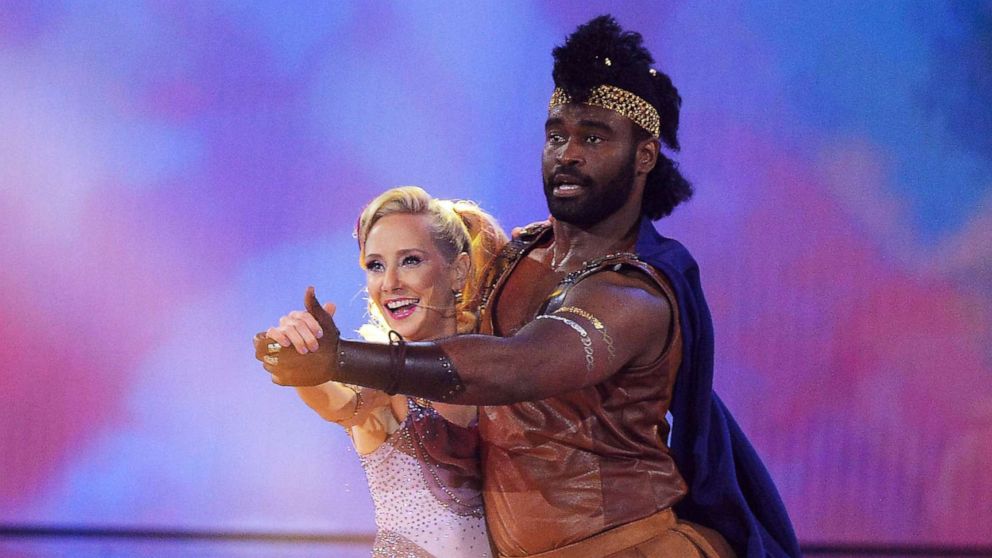 Jackson's raw emotion, paired with her elegant steps as she danced to John Legend's "Ordinary People" moved judge Carrie Ann Inaba to tears, who awarded the "Jessie" alum the first 10 of the season and paved the way for the biggest comeback of the night. Jackson soared to the top of the leader board, just two points shy of a perfect score, with an impressive 28 out of 30.

"Bachelorette" star Kaitlyn Bristowe also shined Monday night and, prior to Jackson's foxtrot, was awarded the first nine of the season with her effortless Viennese Waltz to "Beautiful Crazy" by Luke Combs. However, all the judges seemed to be in agreement that Bristowe needs to start challenging herself by breaking away from the romantic waltzes and take a crack at some Latin dances.

Kaitlyn Bristowe, former star of "The Bachelorette," with Artem Chigvintsev -- 25/20