With both the pressure and emotions running high on Monday night's "Dancing With the Stars," it was a fight to the finish to make it into this season's top 10. Unfortunately for former football star Vernon Davis, who gave his all for his cha-cha and again showcased his vast improvement over last week, he was sent home.

Davis found himself in the bottom two with Olympic figure skater Johnny Weir, who was coming off from last week's highest score of the season -- 29/30. All three judges expressed frustration that they had to choose between the two and Bruno Tonioli had the toughest decision of all because he had to act as the night's tie-breaking vote. He ultimately chose to keep Weir.

Davis, appearing on ABC's "Good Morning America" on Tuesday, said he thinks his late grandfather, whom he dedicated his cha-cha to, would be "really proud" of what he accomplished on the show.

"He'd tell me that to keep going, keep pressing forward and I did a great job," Davis told "GMA." "And he's smiling right now, so that's the most important thing. It makes me happy."

3:04
After an evening of high scores and even higher emotions, the former NFL star and his dancing pro partner Peta Murgatroyd were booted from the ballroom.

Davis' pro partner, Peta Murgatroyd, had a laundry list of things she will miss about her season 29 buddy.

"He is an incredible human," Murgatroyd explained. "I'm going to miss him so much. He's kind, he's patient, he's resilient, he's just such a hard worker and I had the best partner this season."

As for who topped the scoreboard, dancers brought their A-game Monday night because of the narrowing competition -- which resulted with the season's first four-way tie at the top.

MORE: 'Dancing With the Stars' pro Britt Stewart on earning highest score of the season and her upcoming salsa performance

Machado's beautiful and empowering Viennese waltz to Billy Joel's "She's Always a Woman" served as a message to women everywhere to embrace their bodies and live their lives. The judges were impressed to see a newer, gentler side of the bold dancer and commended her reliability to always give 110 percent on the ballroom floor.

McLean, who dedicated his samba to pro dance partner Cheryl Burke, delighted the judges with his sexy and breezy routine to J Balvin's "Mi Gente" while Aldama's triumphant rumba to Rod Stewart's "Have I Told You Lately That I Love You" earned high praise from the judges' table and, also, her highest score of the season.

Bristowe, who struggled to learn the samba during rehearsals, earned valuable critique from the judges about the areas she needs to improve after finishing her spicy routine to Justin Bieber's "Sorry." Her hard work paid off in the end, allowing her to also collect straight nines.

Another breakout dance came from "Catfish" host Nev Shulman, who was just one point shy of joining the four way tie at the top. His expressive and vivacious jazz routine to Marky Mark and the Funky Bunch's "Good Vibrations" was decidedly the most entertaining dance of the night. 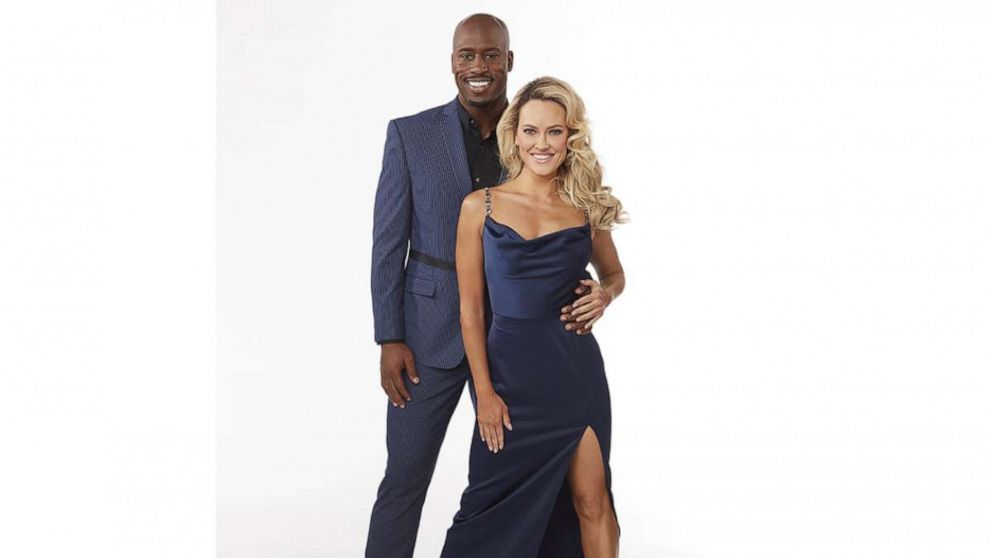 As for the night’s most emotional moments, "The Real" host Jeannie Mai and "Selling Sunset" star Chrishell Stause both tugged at the heartstrings when opening up about their families.

Mai recounted the harrowing tale of her grandparents fleeing post-war Vietnam with their children to start a new life in America while Stause revealed that she lost both of her parents to cancer in the span of the year.

While the two executed phenomenal dances, they both fought through tears on the ballroom floor.

"Dancing With the Stars" returns next Monday to celebrate all things spooky and Halloween, October 26, at 8 p.m. ET on ABC.