Emotions were already riding high on Monday's "Dancing with the Stars" as the competitors had one last shot to make it to the finals.

However, the night was rife with heartbreaking moments that brought the audience, contestants and judges to tears.

The most devastating moment of the night occurred in the last five minutes of the episode when the season's two habitual highest scorers, Ally Brooke and James Van Der Beek, were sent to the bottom two. 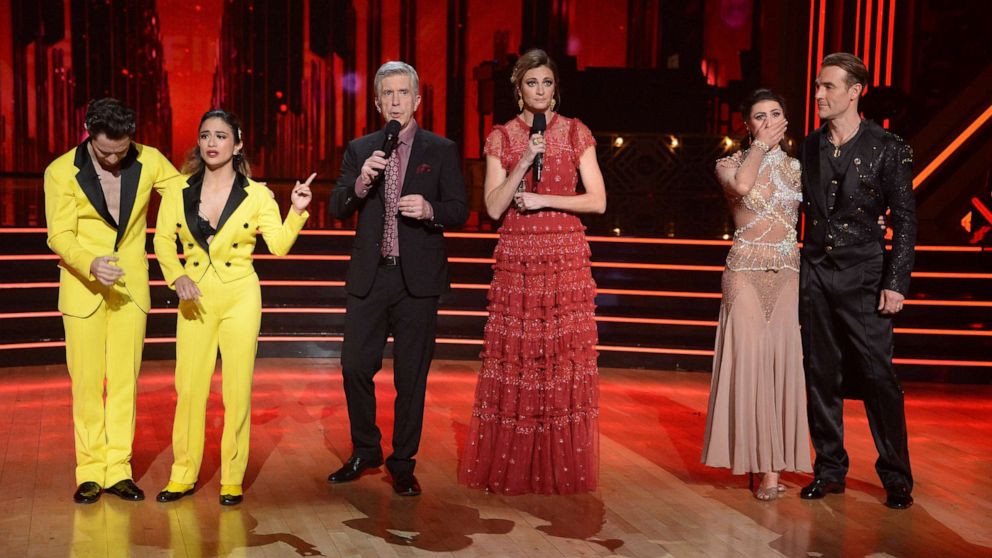 Eric Mccandless/ABC
Five celebrity and pro-dancer couples return to the ballroom to compete on the 10th week of the 2019 season of "Dancing with the Stars," Nov. 18, 2019.
(MORE: Ally Brooke talks finding confidence on 'Dancing with the Stars' after years of being bullied)

With only one save, judges Carrie Ann Inaba and Bruno Tonioli regretfully chose to send Van Der Beek home, which caused Brooke to dissolve into tears and as she begged, "Can I give it to James, please?"

The night ended with Van Der Beek, Brooke, their respective dancing partners, along with the rest of the "DWTS" cast holding each other in shock.

"It's not fair. It's not right," an inconsolable Brooke sobbed.

The shocking elimination was only a fraction of the raw emotion the audience endured over the two hour emotional roller coaster.

Just before Van Der Beek's second dance, a foxtrot to Hozier's "Take Me to Church," he revealed that he and his wife, Kimberly, suffered an immense tragedy on Saturday.

He said, "My wife, Kimberly, and I went through every expecting parent's worst nightmare. We lost the baby."

The Van Der Beeks were expecting their sixth child together -- due in April -- and joyfully revealed their pregnancy earlier in the season. He spoke more about the loss on his personal Instagram.

Wrecked. Devastated. In shock. That’s how we’re feeling right now after the soul we thought were going to welcome into our family has taken a short cut to whatever lies beyond this life. There are no words... thank you everyone for the love & support. It’s exactly what we need. pic.twitter.com/33evspGYM5

Another raw moment came from comedian Kel Mitchell, who opened up about how gun violence affected him personally when it claimed the life of one of his closest friends when they were kids. Mitchell channeled his grief into an emotional contemporary to Whitney Houston's "I Will Always Love You," which depicted the story of him breaking free from a life of violence by choosing love instead.

Judge Len Goodman was so moved and impressed, he wordlessly stood and gave Mitchell a standing ovation -- the season's first. However, he wasn't the only judge with an emotional response, Carrie Ann Inaba fought through tears as she praised and thanked Mitchell for his beautiful performance. The judges awarded him straight 10s.

Bachelorette star Hannah Brown also laid her emotions bare on the ballroom for both her performances. For her first number, which was the night's redemption dance where judges assigned the competitors to improve on the routine that wasn't their best, it was the rumba. She and her partner, Alan Bersten, received a personal lesson from the judge who the reality star clashed with most -- Inaba.

Their interaction was tense from start to finish, with Inaba trying to break down Hannah's walls. The two eventually resolved their differences, with Brown confessing to Inaba that she shuts down whenever she feels personally attacked. Inaba assured her, while holding back tears, that her job is to help the competitors, not tear them down, and that she believes in Brown.

Brown's rumba to Sam Smith's "Dancing with a Stranger" earned her straight nines.

For her second dance -- a contemporary to Selena Gomez's "Lose You to Love Me" -- Brown opened up about her series of heartbreaks while on "The Bachelorette" and her desire to be loved. The raw yet graceful number, complete with complicated lifts and catches, also earned her straight nines and a combined score of 54/60.

Emotions aside, there is one standout dance worth noting: Brooke's feisty and quick Charleston. The routine, which earned the night's only other perfect score, left her and her dance partner gasping for air at the end of the routine -- which made her descent into the bottom two all the more shocking.

"Dancing with the Stars" returns next Monday, Nov. 24, at 8 p.m. ET on ABC where superstar Cher, along with Pitbull and Ne-Yo, will join the "DWTS" cast for the season finale.