Due to the COVID-19 pandemic, Jimmy Kimmel hosted to an empty audience at the Staples Center in Los Angeles while nominees watched from home.

The Emmys started off with a bang with an unprecedented sweep by "Schitt's Creek." The show, which ended its six-season run this year, made history by becoming the first comedy series to sweep all the comedy categories.

And the Emmys made history again when, toward the end of the show, 24-year-old Zendaya became the youngest person to win outstanding actress in a drama series.

Here is how the Emmys unfolded. Latest news on top.

Zendaya, 24, made history when she became the youngest person to win outstanding actress in a drama series for her role in "Euphoria."

.@Zendaya wins lead actress in a drama series for her role in "Euphoria," becoming the youngest-ever winner of the category at age 24. https://t.co/MBKs1IK0Ff pic.twitter.com/Pk5P75HbOI

Movie and TV mogul Tyler Perry, the recipient of this year's Governors Award, accepted his Emmy with a story-turned-metaphor about a homemade quilt his grandmother once gave him.

The recipient of this year’s Governors Award is @tylerperry and The Perry Foundation! The award recognizes Perry’s unparalleled contributions to shaping television and his sustained commitment to humanitarian efforts. Congratulations! #Emmys pic.twitter.com/yL0AaoMfUL

Perry later saw a similar quilt in an antique store. The salesman told him the quilt was made by a former slave who added each patch of the quilt to represent a part of her life.

Perry said the story made him so "embarrassed" about his grandmother's quilt that he brushed off the significance of the gift.

"Here I was a person who prides myself on celebrating our heritage, our culture, and I didn't even recognize the value in my grandmother's quilt," Perry said. "I dismissed her work and her story because it didn't look like what I thought it should."

"We are all sewing our own quilts with our thoughts, our behavior, our experiences and our memories," he said.

Perry noted how he now owns land that once was a Confederate Army base. Now, "on that very land, black people, white people, gay, straight, lesbian, transgender, ex-cons, Latin, Asian, all of us come together working," he said, "to add patches to a quilt that is as diverse as it can be."

Jennifer Aniston, up for lead actress in a drama for "The Morning Show," had some old "Friends" over on her big night -- her "Friends" co-stars Courteney Cox and Lisa Kudrow.

Cox and Aniston joked that the two live together and have been roommates since 1994.

Anthony Anderson, who was nominated for lead actor in "Black-ish," appeared in-person from the Staples Center. He told Jimmy Kimmel, "I'm still rooting for everybody Black because Black stories, Black performances and Black lives matter."

Anderson led Kimmel in a chant of "Black lives matter," telling the Emmys host to say it loud enough so Vice President "Mike Pence can hear it."

Mark Ruffalo delivered a powerful speech during his win for outstanding lead actor in a limited series or movie.

"How are we going to deal and honor and take care of each other and our most vulnerable people? And we do that with love and we do that with compassion and we do that by fighting for them," Ruffalo said to the camera. "If you have privilege, you have to fight for those who are less fortunate and more vulnerable. And that's what's great about America -- our diversity."

Mark Ruffalo accepts the #Emmy for lead actor in limited series or movie for his role in "I Know This Much Is True." https://t.co/Lvq117xzZ6 #Emmys pic.twitter.com/geTjM8V6IV

"We are stronger together when we love each other and we respect each other's diversity," Ruffalo said. "Are we gonna be a country of division, hated and a country only for a certain kind of people? Or are we gonna be one of love and strength and fighting for those-- for all of us?"

"All of us have an American dream and the pursuit of life, and liberty, love and happiness in this great country of ours," he said.

He urged viewers, "get out right now -- make a plan and vote for love and compassion and kindness."

MORE: Emmys 2020: How nominees are getting ready for the virtual show

Regina King, who won for lead actress in a limited series or movie, ended her speech with a similar message.

"Schitt's Creek," which ended its six-season run this year, made history by becoming the first comedy series to sweep all the comedy categories, according to a Television Academy representative.

Wow! And with that, @SchittsCreek has officially swept the Comedy categories! Congrats! #Emmys pic.twitter.com/9tkBRYnnBe

"Schitt's Creek"'s Dan Levy, who won for writing, directing and supporting actor, in his acceptance speech for best comedy urged people to register to vote and then cast their ballot -- "because that is the only way that we are going to have some love and acceptance out there," he said.

His father and "Schitt's Creek" costar Eugene Levy, who won the best actor award, then praised his son. Dan Levy "took our fish-out-of-water story about the Rose family and transformed it into a celebration of inclusivity, a castigation of homophobia and a declaration of the power of love," he said.

The first SEVEN #Emmys of the night have gone to "Schitt's Creek"!

The stars of "Schitt's Creek" have won all four major acting categories. 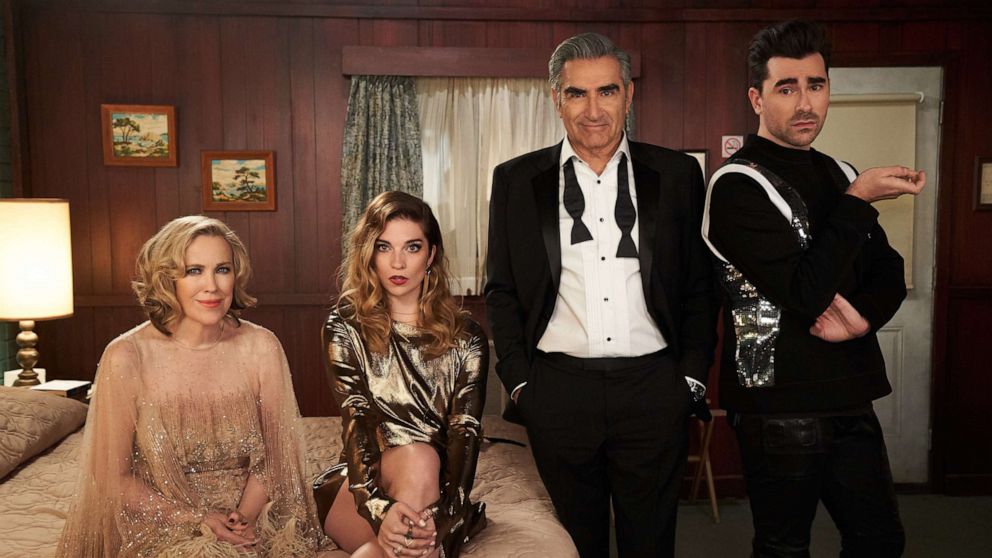 'Television is there for you'

The Emmys this year "took a page from baseball," Kimmel said, and "filled the seats with cardboard cutouts of the nominees."

As COVID-19 confined everyone to their homes this year, TV became the pal we all needed, Kimmel noted in his monologue.

Television is your "big brother, sister's sister, your momma's family, your two dads, your three sons," he said. "Through the good times and the 'Breaking Bads' ... television is there for you."