Rebecca Serle's novel is being hailed as a standout pick for spring.

Everything in Dannie Cohan's life is going according to her grand plan: the twenty-something lawyer has her dream job at a high-profile law firm where she's on track to become a partner. Her boyfriend of two years proposes at the iconic Rainbow Room in New York City and she is over the moon. She thinks they're the perfect match -- that is until the night of her engagement when Dannie has a dream of another life five years into her future.

She sees herself wearing a different ring on her finger and feeling incredibly strong feelings for a different man.

When she wakes up, she's back in her old life and can't shake the feeling. She tries to move on, burying herself in work, and leaning on her best friend Bella, who is like a sister to her.

What will Dannie do now? Her real life is in front of her but she can't stop thinking about this other dream life with a different future. 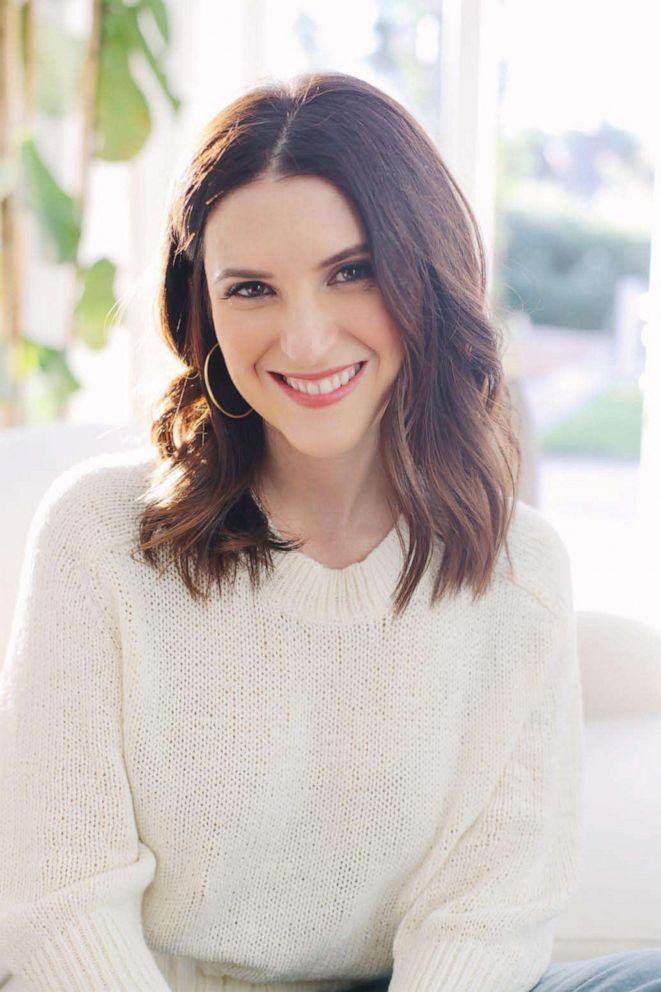 Ann Molen
Rebecca Serle is the author of "In Five Years."

The novel is about the real meaning of love and friendship and the bonds that tie us all together.

Start reading now ahead of the book's March 10 debut with an excerpt below. 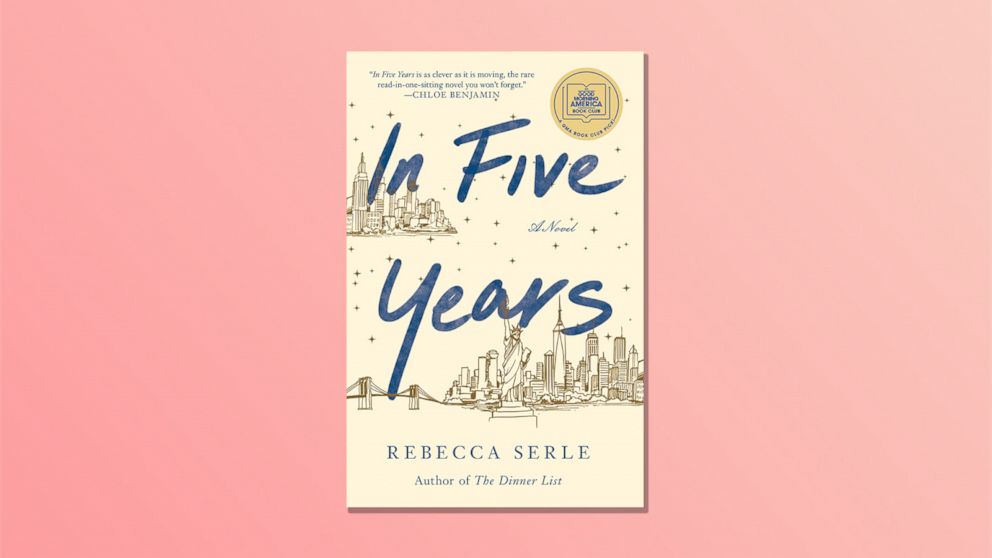 Twenty-five. That’s the number I count to every morning before I even open my eyes. It’s a meditative calming technique that helps your brain with memory, focus, and attention, but the real reason I do it is because that’s how long it takes my boyfriend, David, to get out of bed next to me and flip the coffee maker on, and for me to smell the beans.

Thirty-six. That’s how many minutes it takes me to brush my teeth, shower, and put on face toner, serum, cream, makeup, and a suit for work. If I wash my hair, it’s forty-three.

Eighteen. That’s the walk to work in minutes from our Murray Hill apartment to East Forty-Seventh Street, where the law offices of Sutter, Boyt and Barn are located.

Twenty. That’s how many months I believe you should be dating someone before you move in with them.

Twenty-eight. The right age to get engaged.

Thirty. The right age to get married.

My name is Dannie Kohan. And I believe in living by numbers. "Happy Interview Day," David says when I walk into the kitchen. Today. December 15. I’m wearing a bathrobe, hair spun up into a towel. He’s still in his pajamas, and his brown hair has a significant amount of salt and pepper for someone who has not yet crossed thirty, but I like it. It makes him look dignified, particularly when he wears glasses, which he often does.

“Thank you,” I say. I wrap my arms around him, kiss his neck and then his lips. I’ve already brushed my teeth, but David never has morning breath. Ever. When we first started dating, I thought he was getting up out of bed before me to swoosh some toothpaste in there, but when we moved in together, I realized it’s just his natural state. He wakes up that way. The same cannot be said for me.

He squints at me, and my heart tugs at the look on his face, the way it scrunches all up when he’s trying to pay attention but doesn’t have his contacts in yet.

He takes a mug down and then pours. I go to the refrigerator, and when he hands me the cup, I add a dollop of creamer. Coffee Mate, hazelnut. David thinks it’s sacrilegious but he buys it, to indulge me. This is the kind of man he is. Judgmental, and generous.

I take the coffee cup and go sit in our kitchen nook that overlooks Third Avenue. Murray Hill isn’t the most glamorous neighborhood in New York, and it gets a bad rap (every Jewish fraternity and sorority kid in the Tri-State area moves here after graduation. The average street style is a Penn sweatshirt), but there’s nowhere else in the city where we’d be able to afford a two-bedroom with a full kitchen in a doorman building, and between the two of us, we make more money than a pair of twenty-eight-year-olds has any right to.

David works in finance as an investment banker at Tishman Speyer, a real estate conglomerate. I’m a corporate lawyer. And today, I have an interview at the top law firm in the city. Wachtell. The mecca. The pinnacle. The mythological headquarters that sits in a black-and-gray fortress on West Fifty-Second street. The top lawyers in the country all work there. The client list is unfath- omable; they represent everyone: Boeing. ING. AT&T. All of the biggest corporate mergers, the deals that determine the vicissitudes of our global markets, happen within their walls.

I’ve wanted to work at Wachtell since I was ten years old and my father used to take me into the city for lunch at Serendipity and a matinee. We’d pass all the big buildings in Times Square, and then I’d insist we walk to 51 West Fifty-Second Street so I could gaze up at the CBS building, where Wachtell has historically had its offices since 1965.

“You’re going to kill it today, babe,” David says. He stretches his arms overhead, revealing a slice of stomach. David is tall and lanky. All of his T-shirts are too small when he stretches, which I welcome.

When this interview first came up, I thought it was a joke. A headhunter calling me from Wachtell, yeah right. Bella, my best friend—and the proverbial surprise-obsessed flighty blonde— must have paid someone off. But no, it was for real. Wachtell, Lipton, Rosen & Katz wanted to interview me.

I marked the date in my planner in Sharpie. Nothing was going to erase this.

“I won’t know if I got the job today,” I tell him. “That’s not how interviews work.”

“Really? Explain it to me, then.” He’s flirting with me. David is a great flirt. You wouldn’t think it, he’s so buttoned-up most of the time, but he has a great, witty mind. It’s one of the things I love most about him. It was one of the things that first attracted me to him.I raise my eyebrows at him and he downshifts. “Of course you’ll get the job. It’s in your plan.”

“I appreciate your confidence.”

I don’t push him, because I know what tonight is. David is terrible with secrets, and an even worse liar. Tonight, on this, the second month of my twenty-eighth year, David Andrew Rosen is going to propose to me.

“Two Raisin Bran scoops, half a banana?” he asks. He’s holding out a bowl to me.

“Big days are bagel days,” I say. “Whitefish. You know that.”

Before we find out about a big case, I always stop at Sarge’s on Lexington. Their whitefish salad rivals Katz’s downtown, and the wait, even with a line, is never more than four and a half minutes. I revel in their efficiency.

“Make sure you bring gum,” David says, sliding in next to me. I bat my eyes and take a sip of coffee. It goes down sweet and warm.

“You’re here late,” I tell him. I’ve just realized. He should have been gone hours ago. He works market hours. It occurs to me he might not be going to the office at all today. Maybe he still has to pick up the ring.

“I thought I’d see you off.” He flips his watch over. It’s Apple. I got it for him for our two-year anniversary, four months ago. “But I should jet. I was going to work out.”

David never works out. He has a monthly membership to Equinox I think he’s used maybe twice in two and a half years. He’s naturally lean, and runs sometimes on the weekends. The wasted expense is a point of contention between us, so I don’t bring it up this morning. I don’t want anything to get in the way of today, and certainly not this early.

“But you have time.” David pulls me toward him and threads a hand into the collar of my robe. I let it linger for one, two, three, four . . .

“I thought you were late. And I can’t lose focus.”

He nods. Kisses me. He gets it. “In that case, we’re doubling up tonight,” he says.

My cell phone is ringing where it sits plugged in on my nightstand in the bedroom, and I follow the noise. The screen fills up with a photo of a blue-eyed, blond-haired shiksa goddess sticking her tongue sideways at the camera. Bella. I’m surprised. My best friend is only awake before noon if she’s been up all night.

She yawns. I imagine her stretching on some seaside terrace, a silk kimono pooling around her.

Well that explains her ability to speak at this hour. “I thought you were leaving this afternoon?” I have her flight on my phone: UA 782. Leaves Newark at 3:48 p.m.

“I went early,” she says. “Dad wanted to do dinner tonight. Just to bitch about mom, clearly.” She pauses, and I hear her sneeze. “What are you doing today?”

Does she know about tonight? David would have told her, I think, but she’s also bad at keeping secrets—especially from me.

“Big day for work and then we’re going to dinner.”

I put the phone down on speaker and shake out my hair. It will take me seven minutes to blow it dry. I check the clock: 8:57 a.m. Plenty of time. The interview isn’t until eleven.