“This must be a mistake,” Jodie Foster said after earning a Golden Globe for best supporting actress for “The Mauritanian,” a win no one had predicted, especially the actress.

Welcome to the Golden Globes, the laughingstock of awards shows, where Sunday night’s telecast proved that the 87 voting members of the Hollywood Press Association were up to their old tricks. Full of technical snafus, the 78th annual gala was hosted by Amy Poehler in Los Angeles and Tina Fey in New York before a masked, socially-distanced audience of -- in Fey’s words -- “smoking-hot” first responders and essential workers so celebrities “could stay safely at home.”

A few presenters showed up in person, while the nominees Zoomed in from their couches to pretend they were happy when someone else won. (To her credit, “Promising Young Woman” star Carey Mulligan looked miserable when she lost the best actress prize. At least she was honest -- something the HFPA could hardly be accused of.)

Last week, the Los Angeles Times castigated the scandal-ridden HFPA for having zero Black members and for ignoring all the Black-led and Black-themed films in top categories for best film and TV shows and series. “Look,” said Poehler, “a lot of the flashy garbage got nominated.” Added Fey, "even with stupid things” -- she name-checked the foolishly nominated "Emily in Paris” -- "diversity is still important.”

I don’t want to accuse the HFPA of cheating but, hell, why not? Since they completed voting after the no-Black members story broke in the media, was it an accident that the two opening awards went to two Black supporting actors -- Daniel Kaluuya for “Judas and the Black Messiah” and John Boyega for “Small Axe”? Just saying.

There were fun moments. Comedy actor loser Bill Murray (“On the Rocks”) appeared in an eye-popping print shirt hoisting a martini glass -- a reminder of boozy days gone by when winners slurred their acceptance speeches. Jason Sudeikis, a comedy actor winner for “Ted Lasso,” almost made up for this boringly sober telecast by accepting in a hoodie and using an incomprehensible word salad to express his thanks, prompting fellow nominee Don Cheadle to wave his arms on camera begging Sudeikis to stop his rambling. 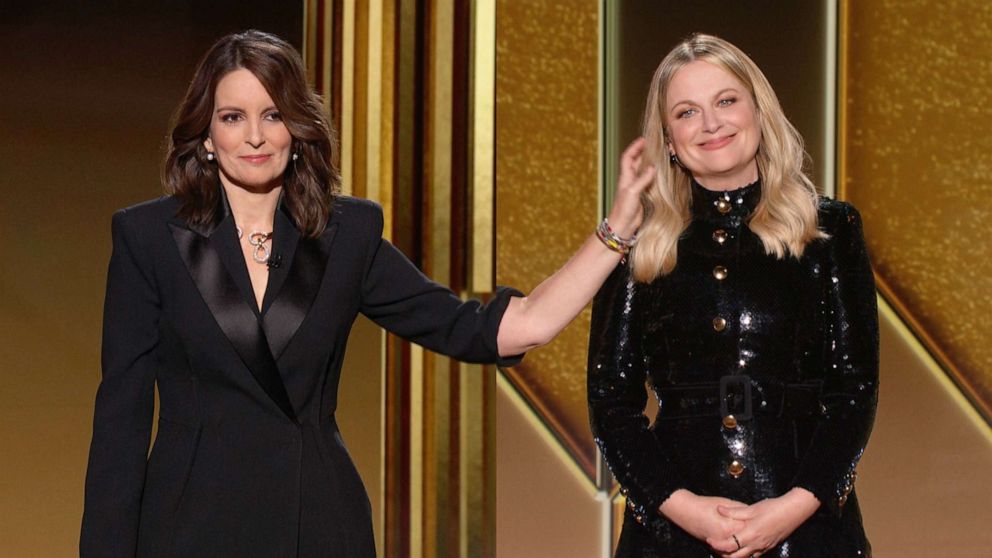 There were highlights, such as the posthumous drama actor win for Chadwick Boseman for his magnificent final performance in “Ma Rainey’s Black Bottom,” and a heartfelt and heart-breaking acceptance speech from his widow. And not all surprises were idiotic. Though predictions for drama actress favored Viola Davis (“Ma Rainey’s Black Bottom”), Carey Mulligan (“Promising Young Woman”) and Frances McDormand (“Nomadland”), the choice of newcomer Andra Day for “The United States vs. Billie Holiday” had a fresh rush of excitement that was rare in a draggy evening.

Of course, the Globe biases stayed the same in the key categories of best movie and TV shows. Despite the on-camera appearance of three HFPA members pledging to change, the big winners ran according to form. “The Crown,” with its white royals, won best TV drama, “Nomadland,” with its white van-dwelling nomads, took best drama film, “The Queen’s Gambit,” with its white chess pros, took best limited series and so on. “Borat Subsequent Moviefilm” star Sacha Baron Cohen deliciously thanked the “all-white” voters for landing best comedy film.

There had been talk that at least the nominees and winners, who took to social media to protest the serious lack of inclusion in the HFPA, would stage a walkout and simply not show up by Zoom or otherwise. That never happened. Hollywood’s appetite for awards, no matter who gives them, continues unabated. And as the diversity-adverse Golden Globes head into its 79th year of dodgy business as usual, all is white with the world.