Henry Golding will take over screens across the nation next month as Snake Eyes, the iconic fighter from the G.I. Joe universe.

In the upcoming Robert Schwentke-directed blockbuster, "Snake Eyes: G.I. Joe Origins," Golding will help to tell the story of how the titular character was molded into the famous ninja commando, a task he said he eagerly welcomed.

"The wonderful thing about this origin story was that we start right at the beginning," the actor said in a recent interview with "Good Morning America."

"We start with him being just like you and me: a person with so many faults, so many hardships that he's gone through life, so many bad decisions that have kind of steered him in completely the wrong direction until he reaches sort of a point where he realizes that he can't keep on making these terrible decisions," he shared.

"He needs to live for something other than himself," he added. "And that's where we find our Snake Eyes."

Golding has held popular roles throughout his career in romantic comedies, such as "Crazy Rich Asians" and "Last Christmas," and dramas such as "A Simple Favor" and "Monsoon." He played a gangster in the star-studded 2020 action comedy "The Gentlemen," but his Snake Eyes role is the first time he'll be front and center as the titular action hero.

The actor said he realized what a huge opportunity it was taking on this role.

"I grew up watching so many action films -- everything from, you know, Donnie Yen, Jackie Chan, Jet Li," he said. "Growing up in Asia, those were like my heroes, and copying those moves and sort of tumbling through cities, you know, in Jackie's kind of very unique style, I think for me, it was kind of like, right, I really want to test myself, can I physically do it?"

"And as challenging as it was, I really enjoyed it," he said. "I became so attuned to that choreography that I think on-screen, it just looks phenomenal." 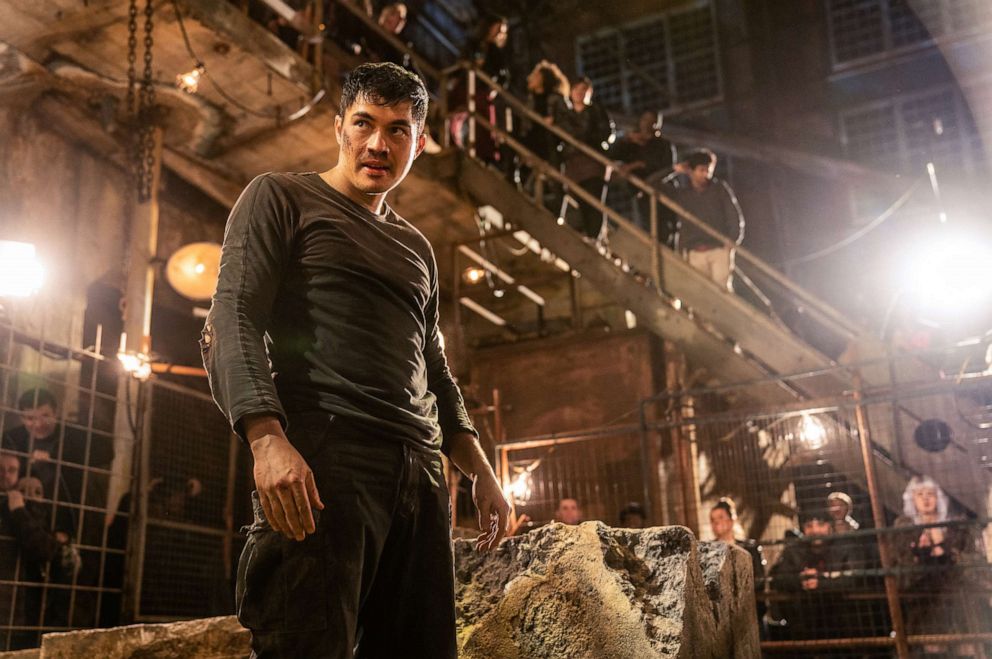 In order to prep for his role in the action-packed film, Golding said he spent hours every day undergoing intense training.

"We would do a good four hours of training every single day, learning choreography to basic hand-to-hand combat, to katana -- sort of like sword work, swordsmanship," he said. "Then I would do an extra hour and a half of private training just to get my keep my cardio and my strength up."

"It definitely wasn't anything aesthetic, it was really practical physicality," he continued. "We had to do everything -- all the stunts ourselves -- so it was amazing to be able to tune my body in that sense. Then when it came to it, it just felt so natural."

The actor said that he even surprised himself with what he was able to accomplish watching the footage back.

"I'm just like, 'Holy crap, like I actually did that,'" he said. "Because at that point, you just have such vision and such focus that you just want to hit the points where you need to and just make it look like badass." 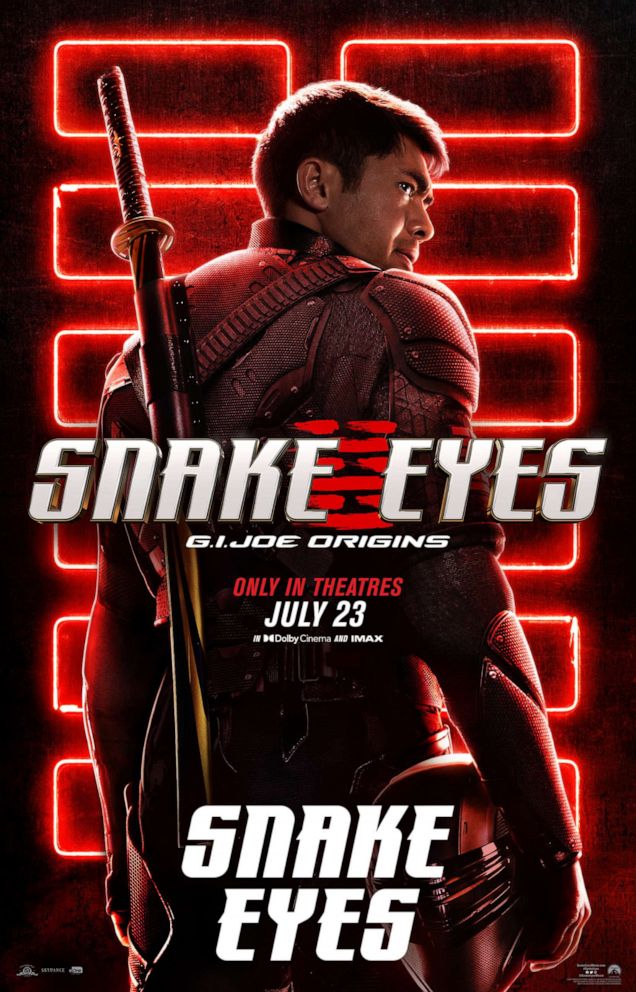 While he might be playing an action hero in the upcoming film, Golding says this is not a superhero movie.

"Because of the real heritage of G.I. Joe, I think it never was a superhero movie -- it was a group of extraordinary humans, men and women, who were able to tune themselves and train themselves to be the best at what they do," he said.

Golding said that he feels this factor allows many to take inspiration from the film.

"You don't have to be born with special skills, you don't have to have these kind of heroic values, you just have to be able to be the hardest worker in the room, you have to be so disciplined," he said. "That is the magic of G.I. Joe -- is that anybody can be one, or be in the Joe's."

The stage is set, and the swords are drawn. ⚔️ Don't miss #SnakeEyes - Only in theatres July 23. pic.twitter.com/WGMqrMuZcO

He also hopes kids watching the film will see that this story is "as close to real superheroes as you will be able to get, and it's better than that, because hard work pays off."

"Snake Eyes: G.I. Joe Origins" hits theaters July 23, and the actor said he hopes fans will head to the movies to take in "the sheer beauty" of the film.

MORE: Taking a trip this summer? Experts say you may want to consider taking out travel insurance

Along with heading to movie theaters as they open with proper safety measures, Golding is also embracing traveling in areas it is safe to do so, post-pandemic.

"We've come out of one of the most challenging periods in human history ... we're going to be looking back at this time, five to 10 years down the line, thinking, how do we mentally get out of that?" he said. "Not only physically, but it takes such a mental toll on everybody."

"One thing that I think everybody has been yearning for was to escape and get out of that bubble that they've been living in -- go on vacation, travel, experience, smell new things, digest different cultures, meet new people, eat amazing food," he said. 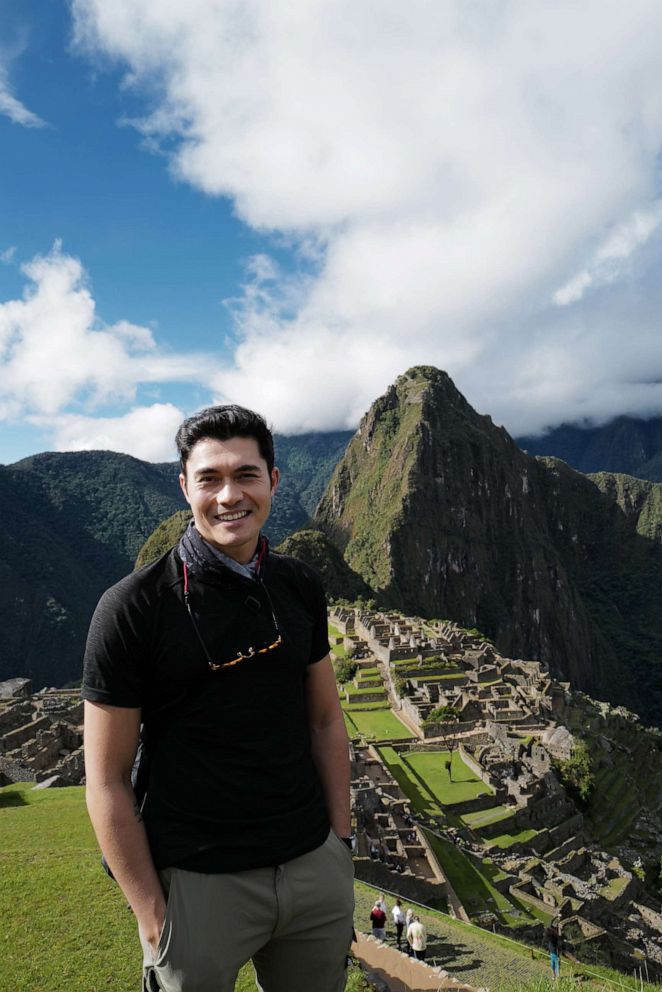 The actor, who previously worked as a travel host and often posts about his excursions online, recently partnered with financial tech company Affirm to promote its June travel giveaway.

During June, people can submit photos from their previous travel experiences to enter to win $5,000 for their next vacation. Every photo submission will also count as an entry for the grand prize of $15,000, which one randomly selected winner will take home at the end of the month.

1:24
Henry Golding has partnered with Affirm to let people know that travel this summer can be accessible and affordable for everyone.

Golding said he hopes to inspire people to "get back out there" and "remind them of the good old days" through the partnership.

"Thankfully, everybody's getting their vaccines. I think places are opening up, and so hopefully people get get back on the road this summer," he said.