Jon M. Chu said his progression to making stories about his cultural identity came "naturally" in his career.

While reflecting on his time creating in the film industry for ABC News' "Nightline" and "Good Morning America," the director behind 2018 smash hit "Crazy Rich Asians" discussed the film's cultural significance, his path toward directing films that centered on his own experiences, what's needed to continue driving Asian representation on screen and more.

Before "Crazy Rich Asians," Chu was known for directing a slew of films including "G.I. Joe: Retaliation," "Step Up 2" and "Now You See Me 2." In advance of signing on to direct the film adaptation of Kevin Kwan's best-selling 2013 novel, which would go on to become a box office sensation, Chu said he was at a point in his life where he was "trying to find who I was as an artist and what I wanted to say on this planet."

Chu said he felt the industry was also experiencing a shift with the emergence of the #OscarsSoWhite campaign, and he felt the lack of Asian representation in cinema was being called out on a larger scale.

"I was, like, 'Yeah. Why isn't this happening?' And then I realized, 'Oh, wait. I'm literally in this business,'" he reflected. "And as a director, I can cast whoever I want. And why am I not casting that? Why am I not at least taking an attempt to make change?"

He said immense pressure came in taking on the project, for himself and all involved, but making the film was "healing" for him.

"There's no other word, 'cause you don't realize how scarred you actually are until you start to -- the community comes out and you start to build a new foundation," he explained. "And you realize, oh, these stories that we're telling can be so much more true to who we are than what exists."

Chu said he never could have anticipated the reaction that came with the film, but that wasn't the point for him.

"I had no clue that, you know, the romantic comedy, which had been declared dead in theaters -- would come roaring back because of this cast, because of the messages that we were saying," he continued.

Chu said the comedy proved to him that "you can't un-see things."

"Our job as artists is -- we may not be able to change the world, but you can show more of who we are," he said. "It's not about talking or acting different for other people to accept you. It's about inviting them in to have them understand who you are, who your family is, your traditions."

"And when they see that, there's such commonality between how we want to take care of each other, how we yearn for community, no matter who you are, where you are in the world," he continued. 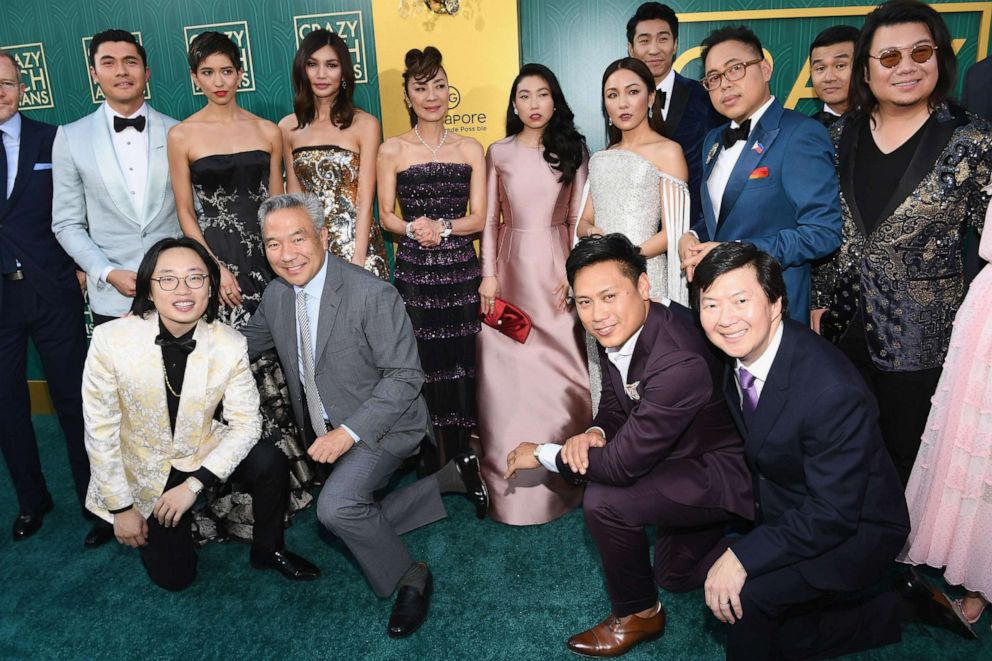 While the film received plenty of positive feedback, criticism for its portrayal of South Asian characters also arose following its release.

Acknowledging he is "still figuring it out" and the film is "not a perfect movie in any way," Chu said, "I think if we want to change the narrative, then we have to act how we want to be heard among other people who don't understand how we're not -- we feel unheard. So we're all learning."

He said this learning includes asking questions like if it's allowable to cast a Chinese person to play a Japanese character.

"Caucasians can play all sorts of people. Are we allowed to do that, too? Are we gonna restrict ourselves? This is a debate that I'm not the person to answer that," he said. "Our community is to answer that. But at least we're at the table now to be the people who determine that. And the only way to determine that is to have more and more projects. Not 10, not 20, not 100 -- thousands of projects."

"We will then all, as a community, figure out how we want to be represented," he added.

Chu says he looks to his learnings from making "Crazy Rich Asians" as he continues to work to make inclusive stories, like the 2021 musical "In the Heights"

"To get in there and explore a community and really in that one be a steward -- say, 'Here are the lessons I learned on "Crazy Rich Asians." Tell me how to do this. And let's work together to create this piece together.' -- that was both a learning experience for me, but very empowering to say, 'Oh, our communities can come together to do this,'" he said.

On continuing the work in the industry

Chu says he doesn't see it as his "responsibility" to keep making inclusive stories; he sees it as his "truth."

"I see it as the reason to be. I see it as, if I'm here, why would I do anything else?" he explained. "I think every person when you get into the job that you know you're meant to do, that you're blessed to do, when you realize that every generation gets a moment to meet and this is my purpose -- I think that's very fulfilling. It's just how I can exist to be honest."

Director @jonmchu talks about Asian representation in Hollywood and the push for #AANHPI artists to tell their own stories. @ashan has more. #AANHPIHeritageMonthhttps://t.co/kWY5S6eOU4 pic.twitter.com/3rXNzEfvAv

He said the work in building representation now lies in navigating and exploring the nuances of the stories being told about different cultures.

"The easy part is cracking the door open and busting it down," he shared.

Now, he said, he's facing the hard part in working on "all the nuance."

When looking at his own future, Chu said the most important story he now has to tell is for his children.

"Every day, I'm framing the world in a different way, but I now realize that's my real job," he added. "The movies are great. That's for me -- that's my selfish thing. But I'm building this world for them. And I hope they have everything they want for them to create the way they want to create."