By Keara Shannon
Share —
Sign up for our newsletters to get GMA delivered to your inbox every morning!

As the U.S. recognizes Asian American, Native Hawaiian and Pacific Islander Heritage Month amid a staggering rise in violence against this community, activist groups who have been devoted to stopping hate are reflecting and looking towards the future.

"I have been doing work in the community for several decades now, and I have never witnessed in my lifetime this level of vitriol and hate against our community," Cynthia Choi, a co-founder of Stop AAPI Hate and the co-executive director of Chinese for Affirmative Action, told "Good Morning America."

The past two years have hit especially hard.

Hate incidents against AANHPI people have continued to rise since 2020, according to data from nonprofit Stop AAPI Hate. A national report released in March 2022 shows that 10,905 hate incidents against people in this community were reported to the organization from mid-March through December 2021.

Women reported 61.8% of all hate incidents and the majority of all incidents were verbal harassment (63%) while 16.2% were physical assaults, according to the report.

Incidents such as the Atlanta spa shooting where six Asian women were among the eight people killed, and the murders in New York City of Christina Yuna Lee and Zhiwen Yan, have left many in the AANHPI community in fear.

We are more than a series of tragic headlines.

In order to combat the violence and discrimination, groups around the country have been working to track and respond to hate crimes; serve the community by providing mental health and safety resources; and offer education on the issue.

"Good Morning America" spoke with groups about their work and what they say needs to be done to help the community and to further protect it.

"I think it's really important during this racially traumatic time to not forget that we have a history of not just experiencing anti-Asian racism and violence, but a history of resistance, a history of collective action, of fighting back, of working towards shared liberation," Choi said. "We are more than a series of tragic headlines, and that's something that I think we have to keep remembering and we have to keep lifting up.”

Stop AAPI Hate, which launched in March 2020 to track and respond to anti-Asian hate, is one of the many groups created to help the AANHPI community combat the rise in violence and harassment over the past two years. 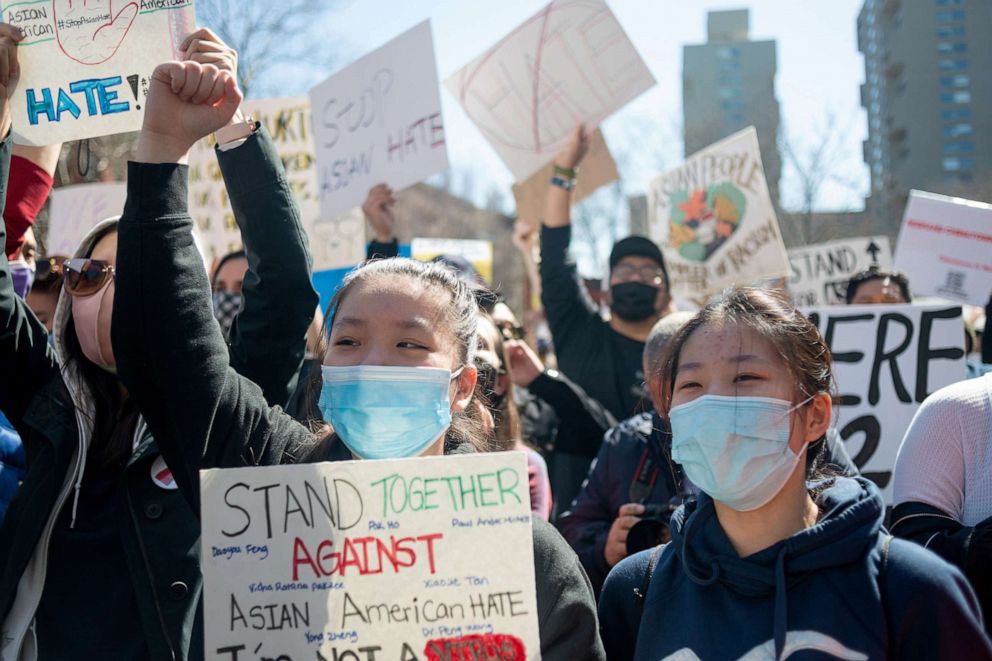 Alexi Rosenfeld/Getty Images, FILE
People gather to protest at the "Rally Against Hate" in Chinatown in New York, March 21, 2021.

The San Francisco-based group encourages people to report any abuse that they suffer so they can use the data to be more informed about what is happening around the country, and how to target it. They also develop public policy frameworks to combat harassment and hate and are working to advocate for policies to strengthen civil rights protections against hate at businesses.

"We are focusing on three areas which are community-based safety initiatives, enforcing and in some cases expanding our civil rights protections and then finally, we need to improve our educational systems so that we promote ethnic studies. We need to know our history. We are a part of American history,” Choi said.

Choi says her group is developing policy frameworks to help prevent hate in public spaces and private businesses, including the verbal street harassment of AANHPI women and other vulnerable communities.

"And so we wanted to address this through public policy solutions, which is like partnering with our government to say 'hey, we need to make sure that when people take public transportation, that they're not being subjected to harassment and hate, that way people, especially women and other vulnerable communities, can walk down the sidewalk and streets and not fear for their safety, for their lives,'" Choi said.

Editor's Picks
MORE: How a woman attacked in NYC is helping other victims of anti-Asian violence

Another group that was created due to the violence occurring is Soar Over Hate, based in New York.

"It was a week after the Atlanta spa shootings, and I just got really overwhelmed by everything that was going on, and I couldn't stop crying and just felt very alone, and I realized that a lot of people 一 Asian-American friends 一 were feeling the same way and feeling very scared for their safety," said Michelle Tran, a medical student who launched Soar Over Hate in 2021, along with Kenji Jones and Tiffany Yeun.

Soar Over Hate focuses on helping the AANHPI community in New York equip themselves with self-defense devices. They also have a scholarship for high school seniors and a therapy fund that pays for up to 10 free therapy sessions for victims of anti-Asian hate incidents.

Jones says mental health is something that is misunderstood within the AANHPI community, which Soar Over Hate hopes to fix.

“I think there is such a big stigma in so many Asian communities that seeking help for mental therapy or mental illness is considered a weakness, and it's absolutely not a weakness,” Jones told GMA. 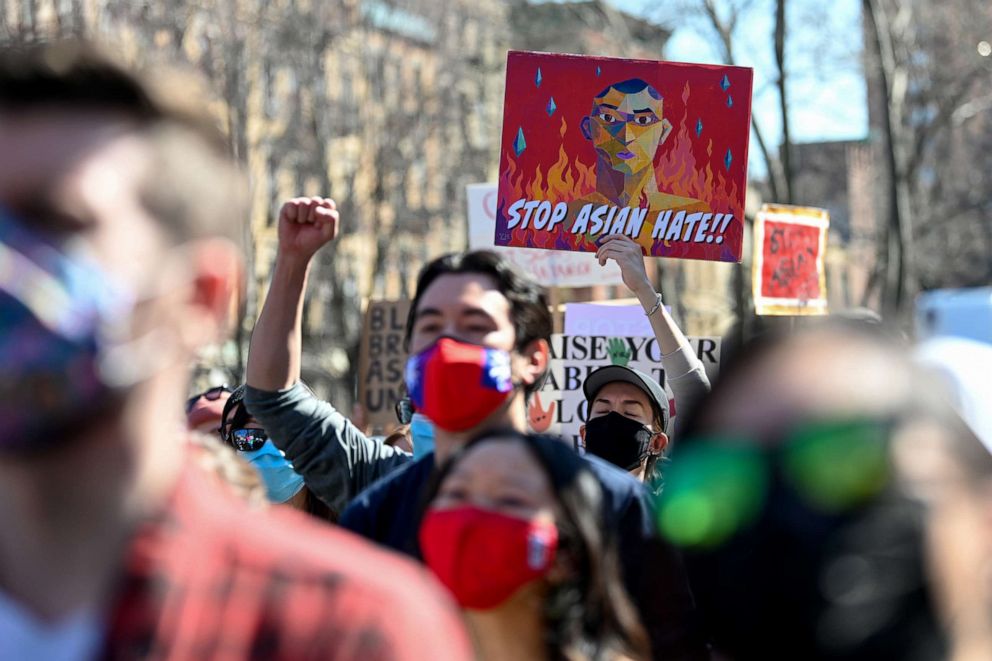 Alexi Rosenfeld/Getty Images, FILE
People gather to protest at the "Rally Against Hate" in Chinatown o in New York, March 21, 2021.

Tran says that the narrative around mental health in the AANHPI community is slowly shifting for the better, but there is still more that needs to be done.

"I think at least with the hate crimes going on right now, a lot of the Asians that we talked to are a little bit more open to talking about mental health because it's a step in the right direction, but it's framed in a way that it wasn't something wrong that they did but more of an external thing that impacted them," Tran said.

Carol Lin, Soar Over Hate's public relations and partnerships lead, joined the staff after attending one of the group's annual Care Fair that offers food, self-defense courses, puppy therapy, and origami among other events. Lin said she's grateful that therapy is being made available for those that need it most.

"Therapy and stuff is not something that me and my immigrant family household have really been made aware of until I was about in high school," she said. "And so just knowing that there are these resources out there, especially through an organization like Soar Over Hate, that's really meant for these times is amazing."

Looking to the future, Tran says the underlying causes behind the hate needed to be addressed systemically and through education for change to happen.

"[There is] the underlying racism that's driving all of these things to happen in the first place; being seen as potential foreigners and scapegoated for the COVID-19 virus or seen as vulnerable enough to attack the people who don't speak back because they're not Americans and they're not going to cause trouble and report that crime," Tran said. "So hopefully, we can help change and better educate people through ordinary knowledge, media awareness and continuing talking about the issue, but potentially more in the educational realm as well."

AAPI Women Lead addresses the representation of AAPI women, girls and gender-expansive communities in the United States. The group, based in Oakland, California, has been focused on ending racial and gender-based violence, as women, girls and non-binary people are victims of hate incidents at a higher rate.

“Especially for the women and the femmes and our gender non conforming or gender expansive communities, violence against us is intersectional. So we experience racial and patriarchal violence,” AAPI Women Lead co-founder and executive director Connie Wun told "GMA." “That's been going on way before the pandemic and way before the rise in attention to our communities.” 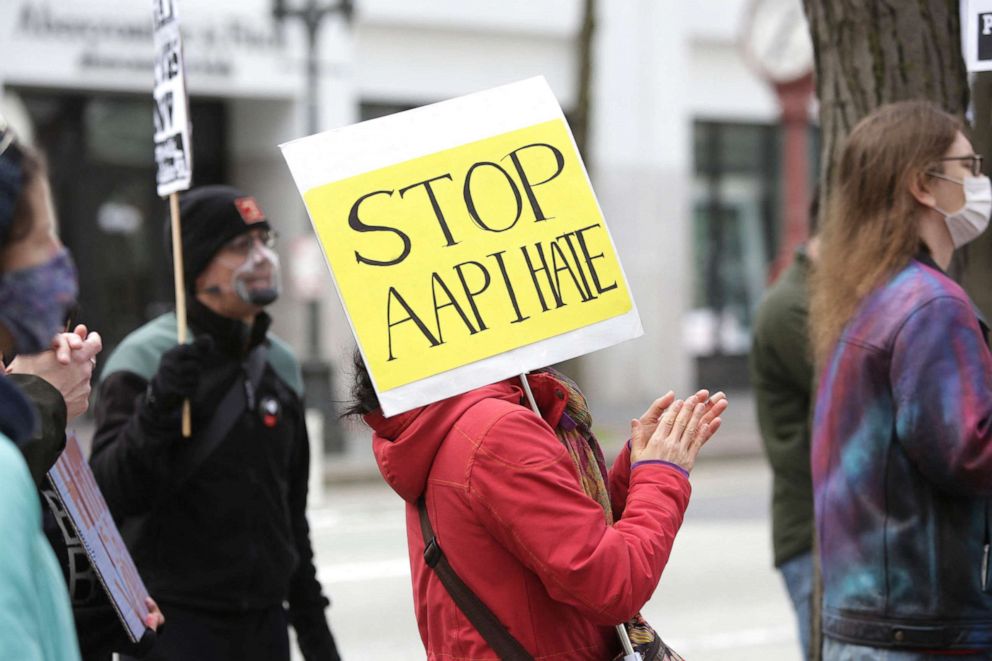 Jason Redmond/AFP via Getty Images, FILE
A demonstrator holds a sign calling for a stop to hate against Asian Americans and Pacific Islanders during a national day of action against anti-Asian violence in Seattle, Wash.,March 27, 2021.

AAPI Women Lead also puts an emphasis on what the community can do to help each other by having bystander training, emergency preparedness and mutual aid projects.

“I wouldn't put it just on you to figure out how to defend yourself," Wun said. "It's a matter of when something is happening, generally speaking, how do we step in to make sure it doesn't happen or how do you prevent someone who's going to cause harm, to not do the harm?”

Wun says that AAPI Women Lead will have a panel focused on mental, emotional and spiritual health in the AANHPI community. They plan to have an acupuncturist, herbal medicine practitioners and intuitive healers on the panel.

"We are about reclaiming traditional forms of healing, as well as combining it with contemporary forms of healing. I think that's really important too, in terms of what it is that we do," she said. "We reclaim our practices as a part of our resistance."