Royals, they're just like us, pouring beer at a pub.

Except that when Kate Middleton, the Duchess of Cambridge, does it, she looks ultra-glamorous.

Duchess Kate, 37, wore a shimmery dress by Missoni in a light shade of Irish green as she took a turn as bartender at the Belfast Empire, a live music venue, in Belfast, Northern Ireland. 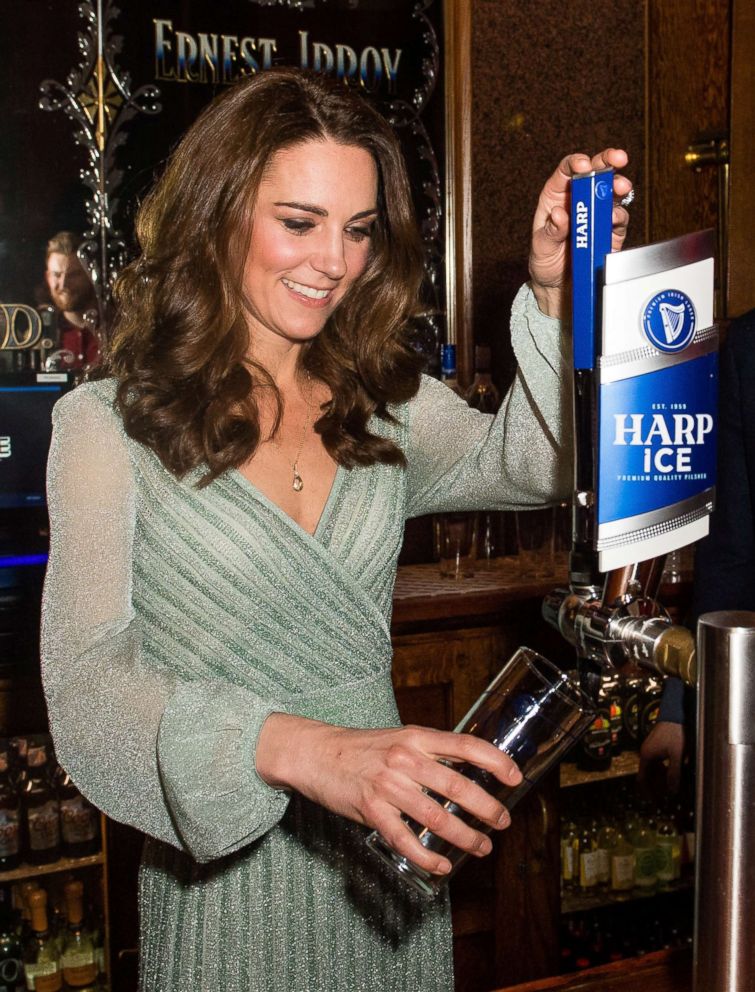 Samir Hussein/Pool via Reuters
Catherine, Duchess of Cambridge, pours a pint of beer as Prince William, Duke of Cambridge looks on during a visit to Empire Music Hall, Belfast, Northern Ireland, Feb. 27, 2019.

Kate and Prince William were each spotted taking their turn pulling a pint of Harp Lager during their stop behind the bar Wednesday.

?? Getting the party started at @BelfastEmpire, where The Duke and Duchess of Cambridge are celebrating young people who are making a real difference in Northern Ireland #RoyalVisitNI pic.twitter.com/JFnIPdy9do

The fun event, which celebrated young people who are making a difference in Northern Ireland, capped a busy day for William and Kate, who also showed off their athletic skills.

The parents of three took part in outdoor activities including soccer, canoe races and archery during their first day in Northern Ireland.

? The Duke and Duchess of Cambridge join children involved in the @OfficialIrishFA's grassroots programmes for a kickabout at @NorthernIreland's Windsor Park. #RoyalVisitNI pic.twitter.com/ya242qCXyX

William and Kate were greeted by enthusiastic crowds Thursday in Ballymena, Northern Ireland.

Kate reportedly said she was "feeling broody," a British term for feeling like you’d like to have a baby, after meeting a young baby in the crowd. Kate's youngest child, Prince Louis, will turn 1 in April.

Kate joined makeup and storyboard demonstrations with students at Malvern Primary School in Ballymena. She and William also attended a camera demonstration led by students.

The Duke and Duchess of Cambridge ended their Northern Ireland visit at Sure Start, an organization that "supports parents with children aged under four years old living in disadvantaged areas in Northern Ireland," according to Kensington Palace.

?? At Ballymena & Little Steps Sure Start The Duchess of Cambridge joins a spring time gardening activity, which gives children and parent an opportunity to plan their own springtime flower to bring home and take care of. #RoyalVisitNI pic.twitter.com/VrqVr7saI4

?? Hatching Dinosaur eggs at Ballymena & Little Steps Sure Start — which children and their parents work together to open and hatch, supporting children’s physical and cognitive skill development. #RoyalVisitNI pic.twitter.com/GAKQ6CdvTZ