Maybelle Blair "could talk about baseball forever," she likes to say.

That's how the trailblazing 95-year-old wound up on stage at an event in New York City this summer, promoting a new TV series about women's baseball -- and then talking about something she never expected.

"You don't have to hide. I hid for 75, 85 years and this is actually, basically, the first time I've ever come out," Blair said at an event in June, speaking about her sexuality in public for the first time.

The audience burst into supportive applause.

Weeks later, speaking with ABC News, Blair said she hadn't planned on announcing her sexuality that day. But it was fitting, given the setting: The June event at which Blair had spoken was for the upcoming Prime Video series "A League of Their Own," based on the beloved 1992 film of the same name, which starred Geena Davis, Madonna and Rosie O'Donnell, and fictionalized the history of the post-war All-American Girls Professional Baseball League.

Blair herself was a player for the Peoria Redwings in 1948. She and the 650 other female players in the league inspired the film and its TV follow-up.

The TV reboot, on which Blair was a consultant, aims to be even more inclusive than its source material.

MORE: Rosie O'Donnell to return to 'A League of Their Own' in new series: See the photo

Blair proudly noted that the Amazon adaptation, which premieres Friday on Prime Video, builds on the movie's legacy by focusing on Black female players and the racism they faced, as well as the reality of gay athletes balancing their personal hopes with society's homophobia.

"Penny Marshall would have loved to have done this," Blair said, referring to the original film's famed director and executive producer.

For Blair, working on the TV show -- helping the writers and actors tell more truths about the beginning of women's baseball -- may have helped her publicly embrace her own truth. 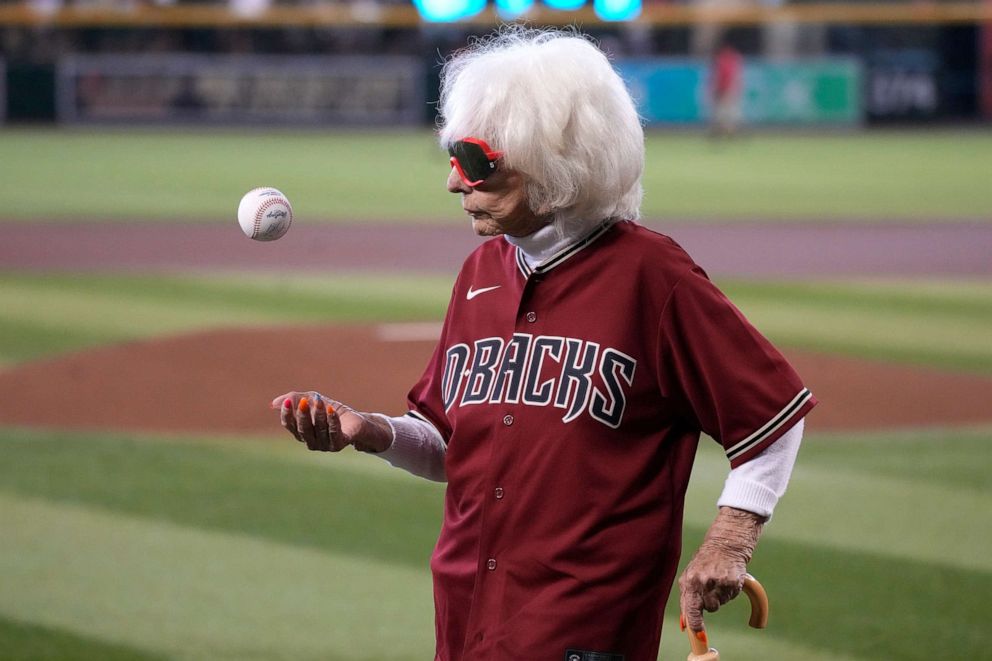 Rick Scuteri/AP, FILE
In this July 24, 2022, file photo, former All American Girls Professional Baseball player Maybelle Blair appears before a baseball game between the Arizona Diamondbacks and the Washington Nationals, in Phoenix.

"I'm so happy I did come out, now that the little girls can have a chance to realize that it's not so bad to be who they are," Blair told ABC. "They should be proud of who they are and be happy that they can be able to live a life of their own. And that's what it's all about: a league of our own, so we need a life of our own."

Still, she admitted, it was hard for her to say it out loud: "gay."

"I was so afraid in my era that if you came out, we couldn't do anything. We couldn't be schoolteachers ... we couldn't even join the service," she said. "We were [considered] the bad guys, which isn't true."

While Blair has spoken about her sexuality in private, those same fears weren't far from mind when she spoke publicly in June.

"All of a sudden I blurted that out and I thought, 'Oh my God, Maybelle, what in the world is your family going to think of you? You're queer?' And I thought, 'Oh my God, they're going to disown me,'" she said. "I was happy I said it -- but then the next day I was really worried about my family, until they started talking to me and calling me up and saying, 'Don't worry, Aunt Maybelle, everything's fine, don't you worry about a thing. We love you for what you are.'"

"And to this day, I'm so thrilled about that," she added. "You have no idea." 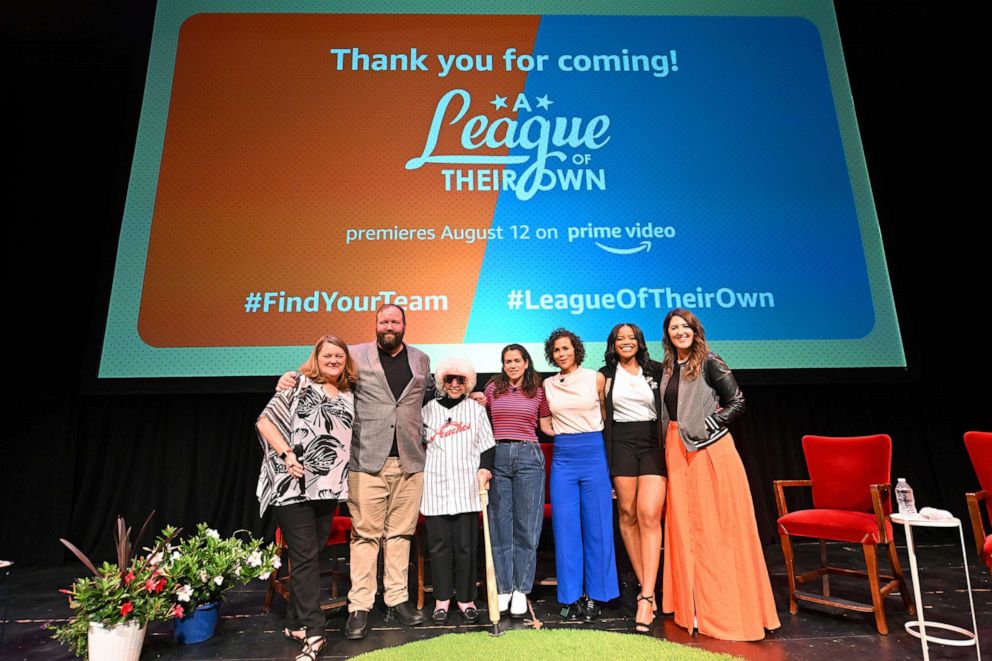 It's another barrier broken for a woman long used to breaking them -- not just as a professional ball player in the 1940s but later as one of the first three women managers at the aerospace giant Northrop Grumman, then known as the Northrop Corporation. Blair worked her way up from chauffeur to manager of Highway Transportation, eventually retiring in 1986 after nearly four decades with the company.

More recently, especially since the original "League of Their Own," Blair has become an advocate of telling the history of women's baseball and for, well, just letting them play.

"I cannot even begin to remember not loving baseball," she said. (A former softball player, too, Blair is quick to note the difference between them. She prefers baseball.)

MORE: Watch the teaser for 'A League of Their Own' reboot series

"I'm very fortunate that the story has come out. I'm glad that the people will get to understand what we have had to endure in our lives," Blair said. "Baseball has done such wonderful things for us."

She'll chat with relish about any and all things related to the sport: her first memory of playing the game, which was probably when she was tapped as a fill-in by her big brother, shagging balls out in right field; or later, in fifth grade, forming her first girls team in school; and after that, when World War II had taken all the best players from Major League Baseball, and Blair joined the Redwings in Illinois.

"They gave me a uniform, I put that on and I thought I was Joe DiMaggio in a little dress. Then when I got my spikes on ... that music of clickity-clack, clickity-clack when you walk, that's the sweetest music I've ever heard," she said, "and to this day it's still one of my favorites." 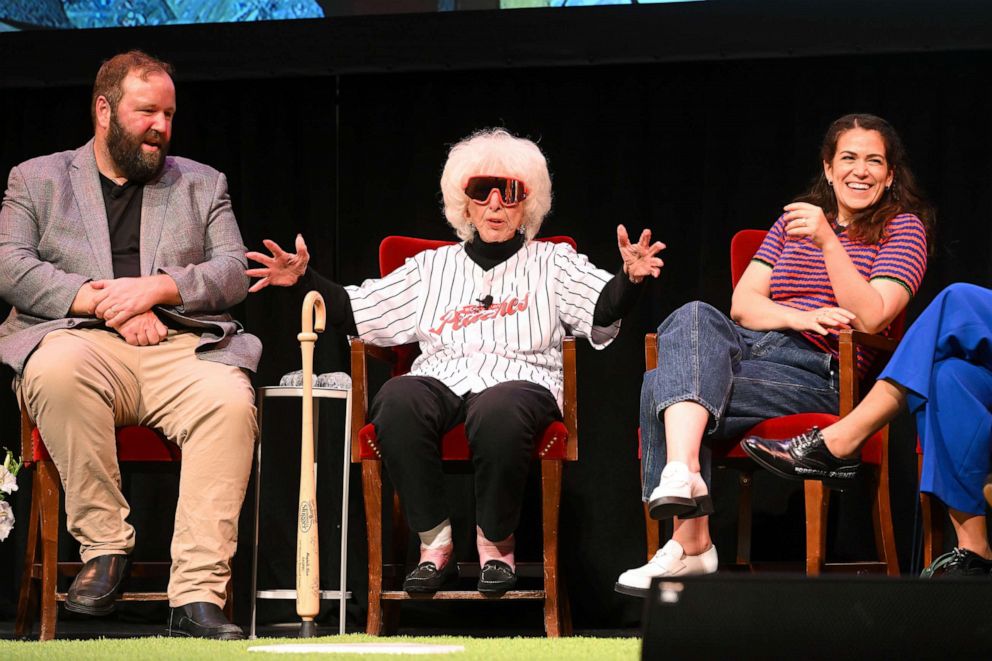 As a player, Blair was nicknamed "All the Way May," among other monikers -- a title she shares with Madonna's character in the movie version of "A League of Their Own."

It was "[the] best time of our lives and then when the war was over, they expected us to go home and put on our aprons and our what-have-you and have babies and stay home, get back in the kitchen," Blair said. "Well, that didn't go over too well with a lot of us, so we went out on our own and started being very independent."

As a young woman, Blair was "full of the devil, tell you the truth," she told ABC News with a smile. "I loved to go out and party, have a few beers and laugh and giggle and sneak out when I wasn't supposed to and do the things I wasn't supposed to do. Hey, that was life -- and that's what made it so wonderful."

For all that joy, part of her was still hiding. 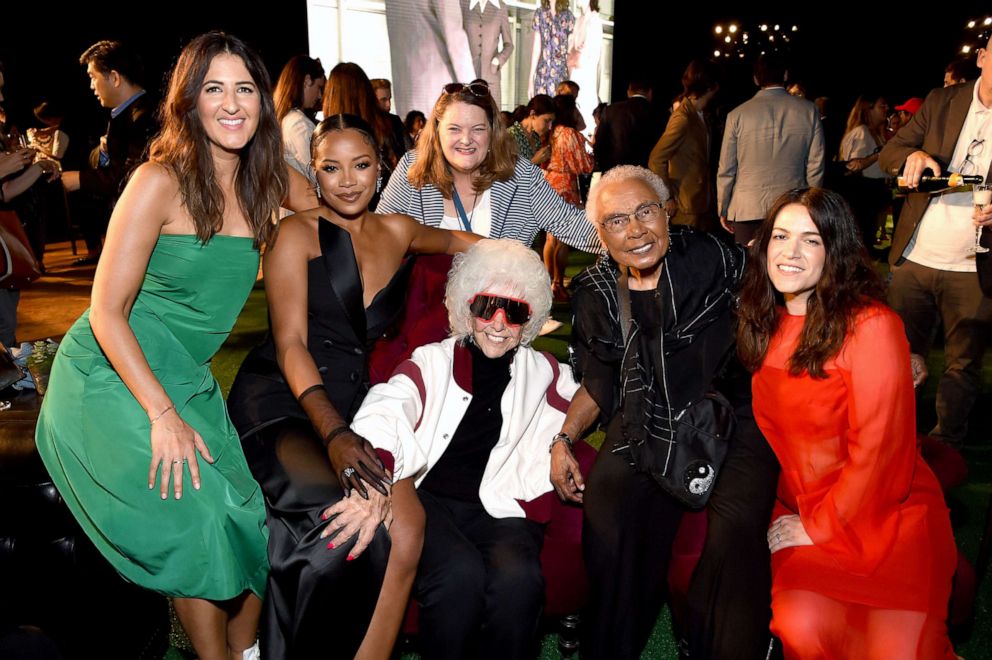 "I was afraid of how people would react [to me being gay]," she said, remembering how she "almost got married once" to "the most wonderful guy in the world." But it would have been all wrong, she said.

Blair demurred on other parts of her personal life but said she did find love.

"I think everybody has settled down with somebody," she said. "I don't care how old you are, there's somebody you're going to love."

MORE: 'A League of Their Own' got it right, real-life former player says

What Blair really wants to talk about is baseball -- which is how she found herself working on the Prime Video series after the producers called her up at her home in California and asked for a meeting.

"I said, 'Oh sure come on down, we'll go have a couple beers and see what we can do,'" Blair said. That was followed by another meeting with series co-creator, actress and writer Abbi Jacobson, and before too long, as Blair tells it, "I was up in Hollywood" watching the whole production get put together -- the scripts, the filming in Pittsburgh and now the press tour, with Blair in the spotlight.

She's glad to put the attention to good use, stumping for a future International Women's Baseball Center in Rockford, Illinois, which she calls "the most wonderful project." 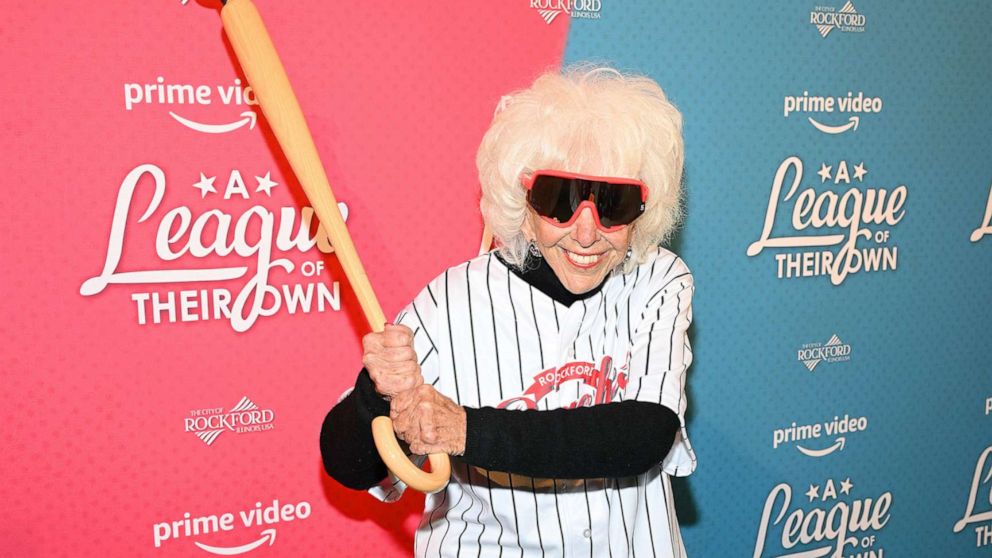 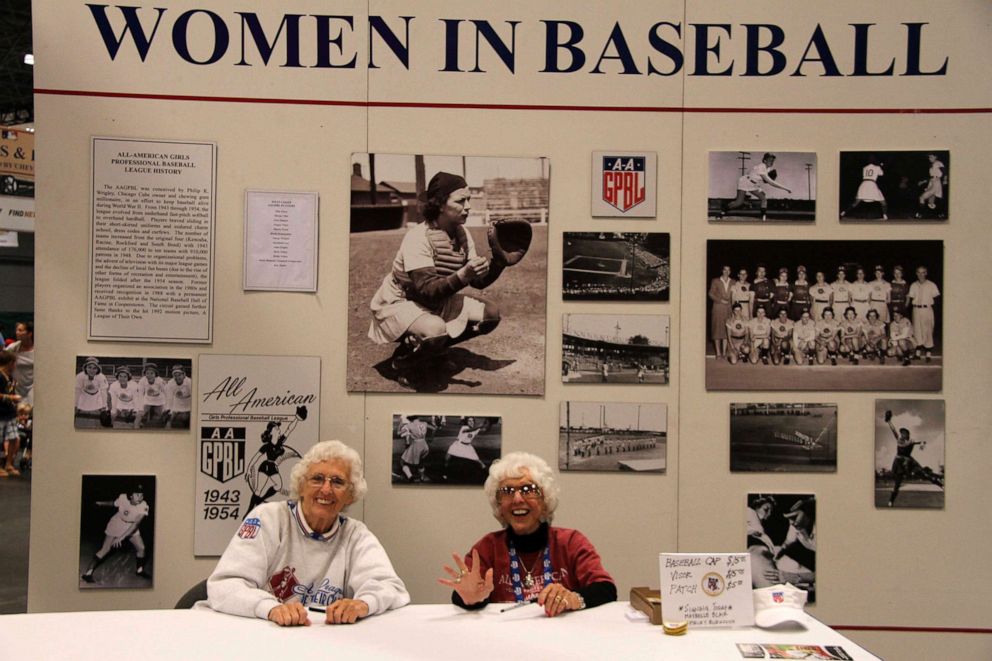 "We have the property and all we need now is the funding," she said. She does her part, selling off the autographed Louisville Slugger bats that have been modified to act as her canes.

"We need to carry on and be able to have a home for women's baseball," she added.

Now living in Huntington Beach, California, Blair continues to make appearances including at Baseball For All events. She said she's still regularly -- happily -- peppered with questions from players from 5 to 30 years old. And she is never too far from her glove: "I just love to play catch," she said.

She just has a bit more work to do first. Asked if she'd like to see another professional women's baseball league, the answer was obvious.

"Are you kidding? Absolutely," she said.

"A League of Their Own" premieres Friday, Aug. 12, on Prime Video.