We're kicking off another year of our "GMA" Book Club with January's pick: "The Maid" by Nita Prose.

Prose's debut novel is centered around Molly Gray, a 25-year-old maid at the Regency Grand Hotel, a five-star boutique hotel, who has an obsessive love of cleaning and proper etiquette.

When readers are first introduced to Gray, they learn that she struggles with social skills and misreads the intentions of others. She is also coping with the death of her Gran, who used to interpret the world for her, codifying it into simple rules that Molly could live by. 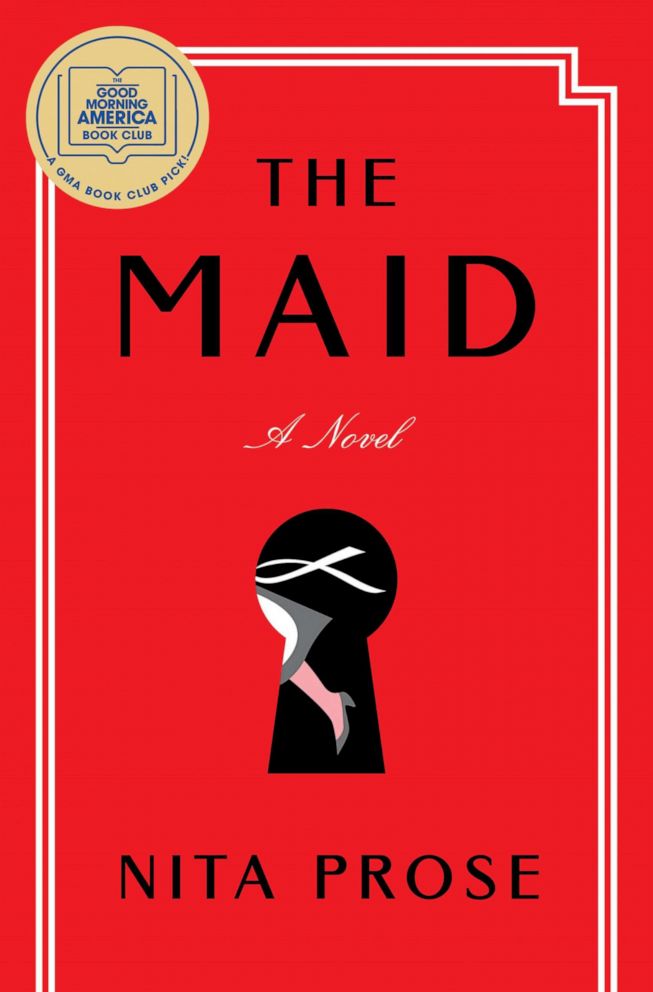 PHOTO: "The Maid" by Nita Prose.

Gray's life is turned upside down when she enters the suite of the infamous and wealthy Charles Black. Not only is the room in a state of disarray, but Black is also dead in his bed. Police immediately turn to Gray and target her as their lead suspect due to her unusual demeanor and Gray quickly finds herself caught in a web of deception.

Will the real killer be found before it's too late?

"It's Agatha Christie meets 'Knives Out' with a little smattering of the board game, Clue," said Prose, who got the idea of "The Maid" after running into one cleaning her London hotel room while on a work trip in 2019.

Prose said that the idea of a maid named Molly stuck with her, and thought about what would happen if the character stumbled across the scene of a crime in a guest room she cleaned every day and knew things that no one else did about the hotel and its guests. 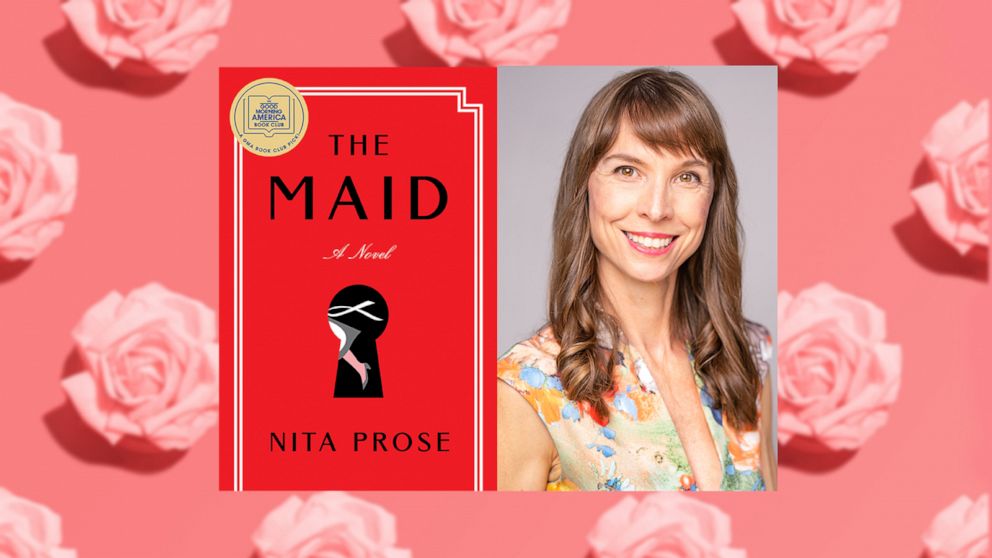 This month, we are also teaming up with Little Free Library to give out free copies in Times Square and at 150 locations across the U.S. Since 2009, more than 208 million books have been shared in Little Free Libraries across the world. Click here to find a copy of "The Maid" at a Little Free Library location near you. Read along with us and join the conversation all month long on our Instagram account -- GMA Book Club and #GMABookClub.

'The Maid' by Nita Prose

Original: $27
Shop Now
By clicking on this shopping link, visitors will leave Goodmorningamerica.com. These e-commerce sites are operated under different terms and privacy policies than Goodmorningamerica.com. ABC will receive a commission for purchases made through these links.
PRH Audio · Excerpted from THE MAID by Nita Prose, Read by Lauren Ambrose

I am well aware that my name is ridiculous. It was not ridiculous before I took this job four years ago. I'm a maid at The Regency Grand Hotel, and my name is Molly. Molly Maid. A joke.

The Regency Grand is a five-star boutique hotel that prides itself on "sophisticated elegance and proper decorum for the modern age."

Never in my life did I think I'd hold such a lofty position in a grand hotel. I know we're all supposed to aspire to be doctors and lawyers and rich real estate tycoons. But not me.

I'm so thankful for my job, especially now, without Gran. Without her, home isn't home anymore. But when I arrive at work, I feel alive again.

There's nothing quite like a perfectly stocked maid's trolley early in the morning. It is, in my humble opinion, a cornucopia of beauty. And my uniform. What a joy to see it hanging from my locker, wrapped in clingy plastic—clean, disinfected, freshly pressed, a new beginning.

Once I'm uniformed, I know just what to say and do—at least most of the time. The truth is, I make etiquette mistakes with alarming regularity, offend when I mean to compliment, say the wrong thing at the wrong time. It's only because of my gran that I know a smile doesn't necessarily mean someone is happy. Sometimes, people smile when they're laughing at you. Or when thanking you, though they really want to slap you across the face.

Recently, I turned twenty-five, "a quarter of a century" my gran would proclaim to me now if she could say anything to me. Which she can't, because she is dead.

Yes, dead. Why call it anything other than what it is? She did not pass away. She did not go gently. She died. About nine months ago.

The day after her death, I went to work, as usual. Mr. Snow, the hotel manager, was surprised to see me. No one else at the hotel likes him much. As Gran would say, Never mind what others think; it's what you think that matters. And I agree. One must live by her own moral code, not follow like a sheep, blindly.

Today at work, I found a guest very dead in his bed. Mr. Black. The Mr. Black. Mr. Charles Black and his second wife, Giselle Black, are long-time repeat guests at The Regency Grand. Mr. Black is—was—a famous impresario, a magnate, a tycoon. Giselle is much younger than him and is often described as a "trophy socialite."

It was around three o'clock today when I returned to the Black suite after cleaning it in the morning. Don't think that I'm sloppy or disorganized just because I cleaned the Black suite twice. When I clean a room, I leave it spotless—no surface left unwiped, no grime left behind. I don't cut corners, I shine them. But this morning, the Blacks' bathroom was guest-occupied, so I had to circle back in the afternoon.

I paused outside the Blacks' door. "Housekeeping!" I said in a loud but politely authoritative voice. No reply. I took my master key card and buzzed into their suite.

It was not as I'd left it a few hours earlier, in a state of perfection. There were several minibar bottles of scotch knocked over on the glass table, a tumbler beside it half empty, an unsmoked cigar beside that, a crumpled napkin on the floor and a divot on the divan where the drinker's bottom had left its mark.

A maid's work is never done.

I decided to check the bedroom. And that's when I saw him. Mr. Black, flat on his back on the bed. His head was resting on one pillow, not two, and the other two pillows were askew beside him. I would have to locate the mandatory fourth pillow, which I most certainly put on the bed this morning when I made it, because the devil is, as they say, in the details.

Of course, my first thought was not that Mr. Black was dead. It was that he was napping soundly after having enjoyed more than one afternoon tipple. I do know something about sound sleepers, because my gran happened to be one, but no sleeper rests so deeply that he gives up breathing entirely.

I walked over to Mr. Black and tapped his shoulder. I put two fingers to his neck, checking for a pulse, which I did not find.

I called down to the front desk right away.

"Good afternoon," I said. "This is Molly, the maid. I'm dealing with an uncommon mess."

"I am housekeeping," I said. "There's a guest who is … permanently indisposed."

This is why it's always best to be direct and clear at all times. "He is very dead," I said. "Dead in his bed. Call Mr. Snow. Immediately!"

I hung up after that. And then I fainted, as I sometimes do when consciousness becomes overwhelming.

Now, I find myself here in Mr. Snow's luxurious office. My hands are shaking. My nerves are frayed. But what's right is right. What's done is done.

I have a lovely cup of tea and a shortbread biscuit. Who made me such a perfect cup? Was it Mr. Snow? Or someone else in the kitchen?

I suddenly miss my gran. I miss her terribly.

I bring the biscuit to my lips and crunches nicely between my teeth. The texture is crisp, the flavor delicate and buttery. It is a delightful biscuit.

From the book The Maid by Nita Prose. Copyright © 2022 by Nita Prose. Published by Ballantine an imprint and division of Penguin Random House LLC. All rights reserved.