Rapinoe, 34,won the Best FIFA Women's Player 2019, given to the top women's soccer player in the world, at a ceremony in Milan.

Rapinoe -- who led the U.S. Women's National Team to a World Cup victory earlier this summer and has led the team's fight for equal pay – used her speech as a call to action.

After giving soccer-related, recent examples of racism, homophobia and sexism, Rapinoe said, "Those are all the stories that inspire me so much. They also admittedly make me a little bit sad and a little bit disappointed." 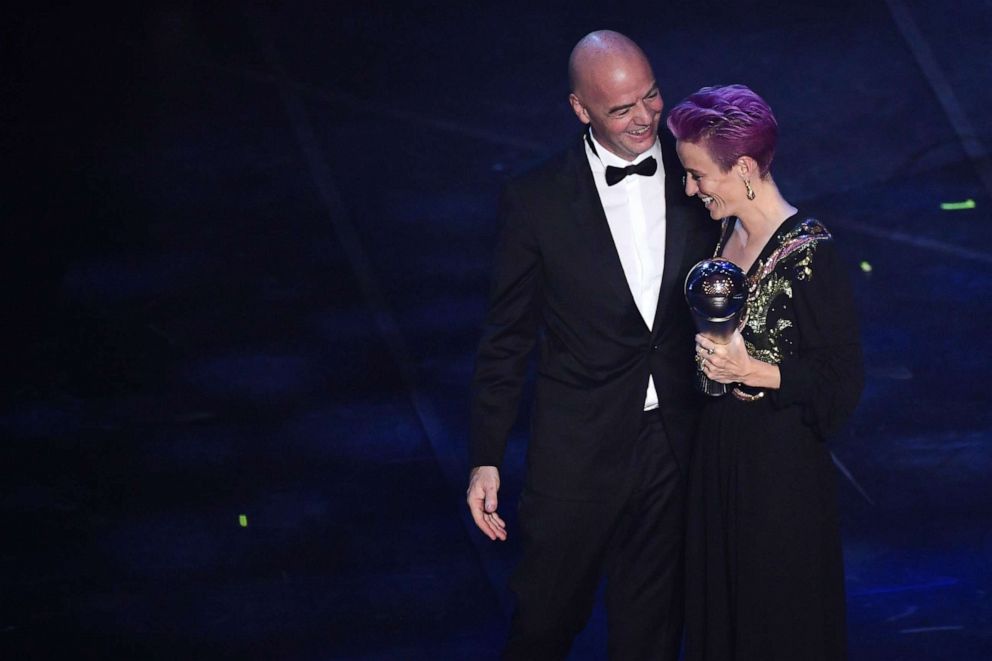 "We have such an incredible opportunity being professional football players," said Rapinoe, a target of President Donald Trump on Twitter during the World Cup. "We have so much success, financial and otherwise. We have incredible platforms. I ask everyone here ... lend your platform to other people, lift other people up, share your success."

"We have a unique opportunity in football different to any other sport in the world to use this beautiful game to actually change the world for better," she said. "That’s my charge to everyone.”

“I hope you take that to heart and just do something, do anything," Rapinoe added. "We have incredible power in this room.”

Rapinoe is the fourth U.S. woman to win FIFA women's player of the year honors, following in the cleats of Abby Wambach, Carli Lloyd and Mia Hamm.

It was a breakaway goal from Lavelle and a penalty kick from Rapinoe that pushed the USWNT to win their fourth World Cup title in a 2-0 finish over the Netherlands in July. Rapinoe was awarded the tournament's two biggest awards, Golden Boot, for top scorer, and Golden Ball, as the best player in the tournament.

Since then, the soccer pro has scored a book deal, won at the ESPYs with her teammates and led the team in walking out of mediation talks with the U.S. Soccer Federation in their fight for equal pay.

She's got the trophy. She's got the bling. She's also barefoot now.@mPinoe a relatable 👑 pic.twitter.com/WTG8IyFDPM

"We won't accept anything less than equal pay," Rapinoe said on "Good Morning America" last month. "We show up for a game, if we win the game if we lose the game if we tie the game, we want to be paid equally, period."