Two stars of the U.S. women's soccer team say the ball is in the court of the U.S. Soccer Federation after the reigning World Cup champions walked out of mediation talks being held Wednesday in their fight for equal pay.

"They're the only employer that we could have playing for the national team, we're the only employees that they could have, so for better or for worse we're tethered together," Megan Rapinoe, co-captain of the U.S. Women's National Team (USWNT) said Thursday on "Good Morning America." "I think that if and when and ever they are willing to have a conversation about equal pay that starts there and goes forward, we're always open to that."

"We won't accept anything less than equal pay," she added. "We show up for a game, if we win the game if we lose the game if we tie the game, we want to be paid equally, period." 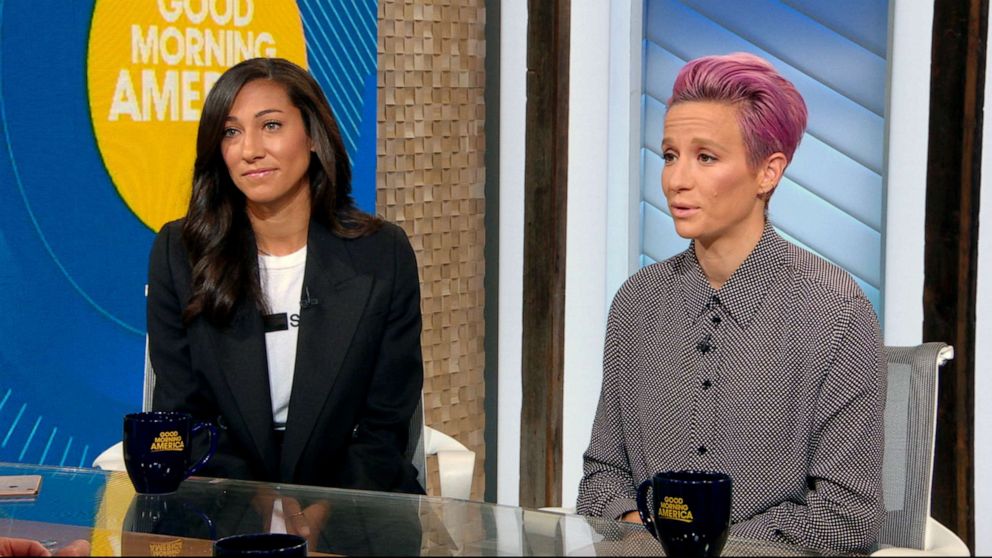 ABC News
USWNT stars Megan Rapinoe and Christen Press speak out on "Good Morning America" about the end of mediation in their fight for equal pay.

The USWNT filed an equal pay lawsuit against the U.S. Soccer Federation earlier this year. The two sides had agreed to go to mediation just before the World Cup kicked off in France in June.

The lawsuit cites the discrimination in pay, but also the denial of "at least equal playing, training, and travel conditions; equal promotion of their games; equal support and development for their games; and other terms and conditions of employment."

"I think we're very confident in our case in what's transpired," USWNT player Christen Press said on "GMA" alongside Rapinoe. "I think for us it's more than about this moment or this team ... It's actually about women everywhere being treated equally and respectfully in the workplace so if that means that we're going to go to trial then we're going to do that, and we're going to do it very confidently."

The U.S. Soccer Federation (USSF) fired back at the athletes in a Wednesday statement, calling their actions "aggressive" and saying they had presented "misleading information" for months.

"We have said numerous times that our goal is to find a resolution, and during mediation we had hoped we would be able to address the issues in a respectful manner and reach an agreement," the USSF said in the statement. "Unfortunately, instead of allowing mediation to proceed in a considerate manner, plaintiffs' counsel took an aggressive and ultimately unproductive approach that follows months of presenting misleading information to the public in an effort to perpetuate confusion."

"We always know there is more we can do," the statement continued. "We value our players, and have continually shown that, by providing them with compensation and support that exceeds any other women's team in the world. Despite inflammatory statements from their spokesperson, which are intended to paint our actions inaccurately and unfairly, we are undaunted in our efforts to continue discussions in good faith."

Press argued Thursday that equality is "not just a word you can say."

"I think it's quite simple from our perspective," she said. "We want to be paid equally and that just means that when we show up to a game that we get compensated the same way that a man would for showing up for the same game."

"And I think that U.S. Soccer and Carlos and the board just showed us that they weren't willing to start there with equality," Press continued. "And it's not just a word you can say, it's something you have to stand behind because on this issue there is no social equality for women without financial equality."

The U.S. women ran undefeated through the 2019 World Cup in June and July, including a 2-0 win over the Netherlands in the final. It was the second consecutive World Cup victory for the women, who have also won three of the last four Olympic gold medals. 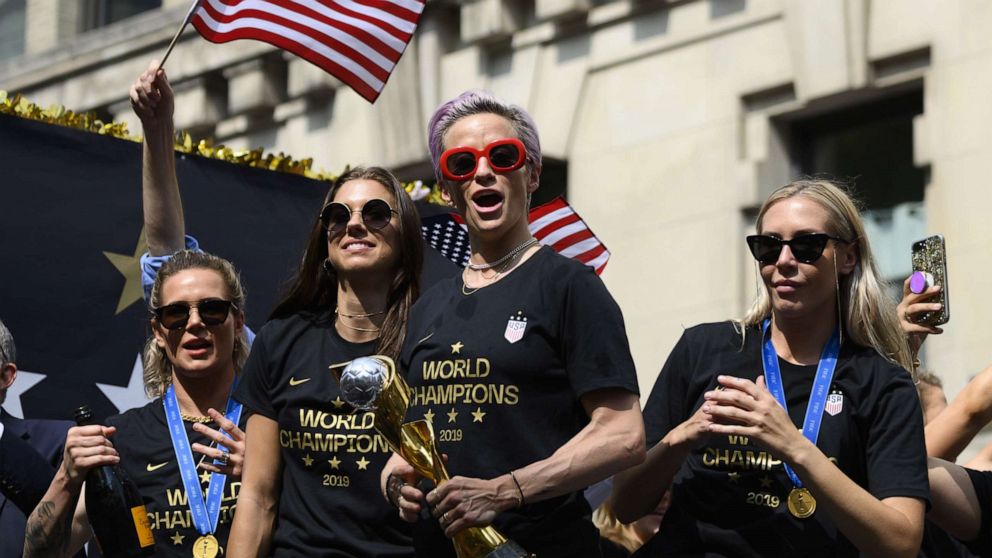 Johannes Eisele/AFP/Getty Images, FILE
In this file photo taken on July 10, 2019, Megan Rapinoe, center, and other members of the World Cup-winning U.S. women's team take part in a ticker tape parade for the women's World Cup champions in New York.

The U.S. men's team did not qualify for the most-recent World Cup, and their best World Cup result, third place, came 89 years ago.

When it comes to the actual legal issues at play, the suit points to two federal laws: the Equal Pay Act, which prohibits paying employees unequally based on sex, and Title VII, which prohibits employers discriminating on the basis of sex.

"The U.S. women's soccer team does not need to be the best in the world in order to earn equal pay. The point of non-discrimination law is that employees doing similar work should be paid equally," Suzanne B. Goldberg, director of the Center for Gender & Sexuality Law at the Columbia Law School, told ABC News earlier this year.

In a statement released Wednesday, a USWNT spokesperson said the team wants women to know "we are undaunted" in the fight for equal pay.

"We entered this week's mediation with representatives of USSF full of hope," said Molly Levinson, spokesperson for the U.S. women's national team. "Today we must conclude these meetings sorely disappointed in the Federation's determination to perpetuate fundamentally discriminatory workplace conditions and behavior. It is clear that USSF, including its Board of Directors and President Carlos Cordeiro, fully intend to continue to compensate women players less than men. They will not succeed. We want all of our fans, sponsors, peers around the world, and women everywhere to know we are undaunted and will eagerly look forward to a jury trial." 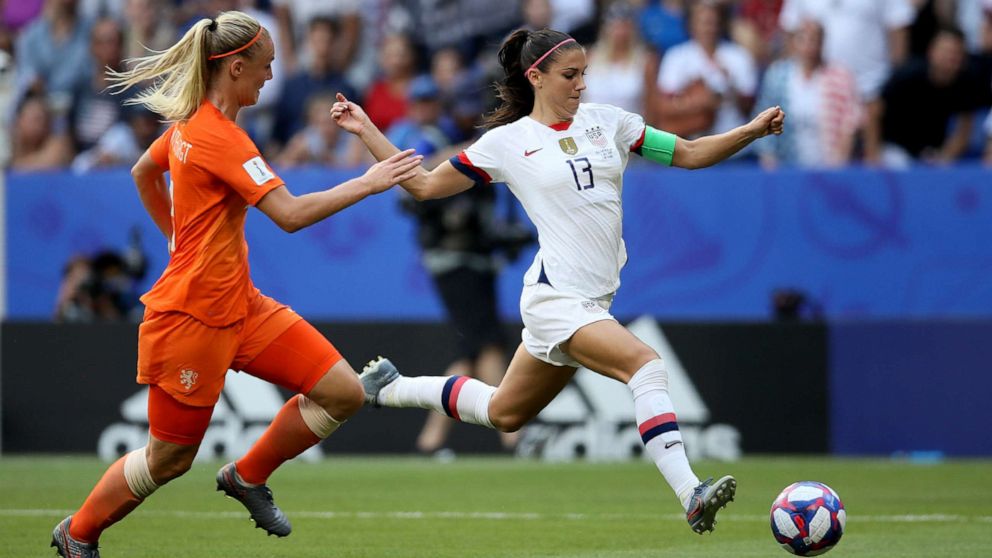 David Vincent/AP
Alex Morgan, right, fights for the ball with Netherlands' Stefanie Van Der Gragt during the Women's World Cup final soccer match between US and The Netherlands at the Stade de Lyon in Decines, outside Lyon, France, July 7, 2019.

When asked about a plan should they lose in their fight, Press responded, "I think you're asking the wrong people what if we lose. It's not generally how we approach things."

Regardless of the trial results, fans spoke out loudly in support of the team both during and after the World Cup. Attendees in France chanted "equal pay" after the women won, while similar chants echoed in the Canyon of Heroes days later when the team paraded through lower Manhattan.

"In 2019 I don't think equal pay is necessarily a novel idea," said Rapinoe. "I think people see how successful we've been and I think that they think we should be compensated for that."