Megan Thee Stallion is urging her fans to seek help amid a mental health crisis among U.S. youth that was exacerbated by the COVID-19 pandemic.

The rapper recently launched a resource website called "Bad B------ Have Bad Days Too," which lists a diverse array of mental health and substance abuse helplines, organizations that provide free therapy and ones that work with marginalized groups, including Black men and women and the LGBTQIA+ community.

The website's name is a lyric from the rapper's song "Anxiety," which is featured on her 2022 album "Traumazine," released on Aug. 12.

In an Aug. 15 Apple Music interview Megan said she usually writes about how she wants to feel, as opposed to how she really feels, but on "Traumazine" she was more open.

In "Anxiety," the rapper reflects on how she coped with grief following her mother's death in 2019 after a battle with cancer. Her father also died when she was a teenager.

"I feel like maybe writing the song was the most hard. I feel like I was definitely just having a crazy day. And I was like, okay, you know what, I'm gonna just write about it," she said at the time.

The danger of the 'strong Black woman' trope for mental health

Megan also reflected on her journey to seeking therapy in an October 2021 interview with actress Taraji P. Henson for her Facebook Watch series "Peace of Mind with Taraji." 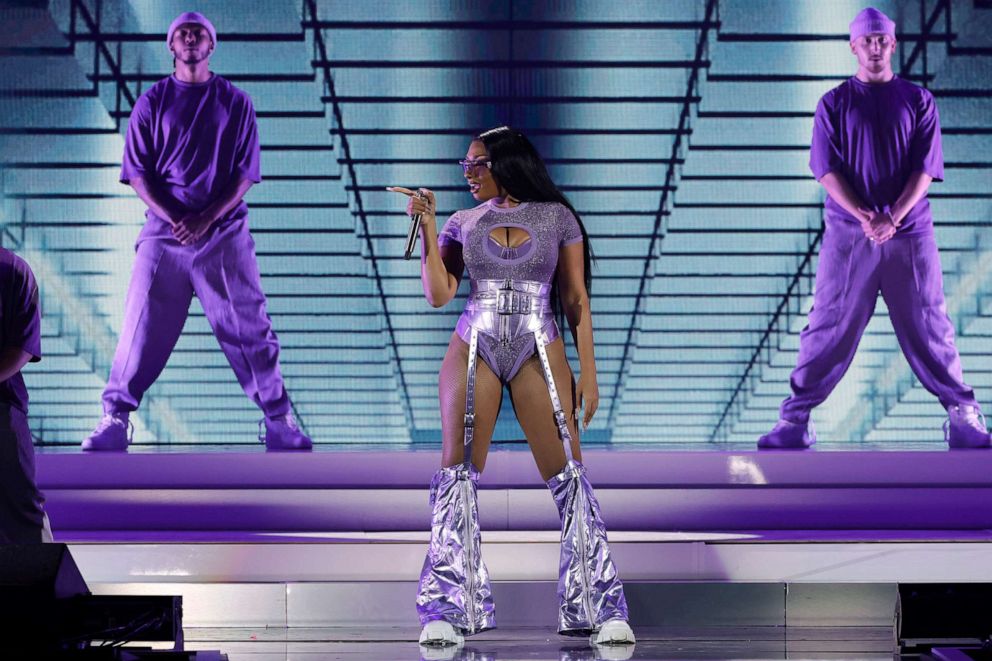 "Now, in this space, I've lost both of my parents. So now I'm like, 'Oh, my gosh, who do I talk to? What do I do?' And I just started learning that it's okay to ask for help. And it's okay to want to go get therapy," Megan said.

With the launch of her website, the rapper joins a growing movement urging Black women to take care of their mental health and to rest.

Theologian and artist Tricia Hersey, founder of The Nap Ministry, previously told "Good Morning America" that the trope of the perpetually "strong Black woman" could be harmful to Black women's mental health in its inherent dismissal of the hardships they endure.

"'Strong Black woman,' to me, allows so much time for abuse and manipulation, for not resting, for burning yourself out," she said during a digital roundtable conversation, which explored why many consider Black women's mental health a taboo subject. "So the 'strong ack woman' has never been anything I've ever related with. I want rest. I want ease. I need help."

In addition to socioeconomic disparities and a lack of inclusive research on mental health, the APA identifies stigma, distrust, and a lack of diverse and culturally competent health providers as barriers to care for Black Americans.

Selena Gomez on creating Wondermind, a new platform designed to help people feel 'they're not alone'

Megan Thee Stallion is not alone in the celebrity world when it comes to pursuing and encouraging more open discussions about mental health and wellness. Celebrities like singers Selena Gomez and J Balvin, as well as Henson, have launched their own initiatives to address the mental health crisis.

The new launch also comes amid a crisis in youth mental health in the United States, which has worsened in recent years.

"Mental health challenges in children, adolescents, and young adults are real and widespread. Even before the pandemic, an alarming number of young people struggled with feelings of helplessness, depression, and thoughts of suicide -- and rates have increased over the past decade," Murthy said at the time. "The COVID-19 pandemic further altered their experiences at home, school, and in the community, and the effect on their mental health has been devastating."

In that same advisory, the U.S. Department of Health and Human Services noted that, prior to the pandemic, "mental health challenges were the leading cause of disability and poor life outcomes in young people, with up to 1 in 5 children ages 3 to 17 in the U.S. having a mental, emotional, developmental, or behavioral disorder."

According to HHS, from 2009-2019, the number of high school students who reported "persistent feelings of sadness or hopelessness" rose by 40%. Suicide rates also increased pre-COVID with rates among those ages 10-24 spiking 57% between 2007 and 2018. The department noted that "early estimates" showed "more than 6,600 suicide deaths among this age group in 2020."

"The pandemic added to the pre-existing challenges that America’s youth faced," the department stated. "It disrupted the lives of children and adolescents, such as in-person schooling, in-person social opportunities with peers and mentors, access to health care and social services, food, housing, and the health of their caregivers. The pandemic’s negative impacts most heavily affected those who were vulnerable to begin with, such as youth with disabilities, racial and ethnic minorities, LGBTQ+ youth, low-income youth, youth in rural areas, youth in immigrant households, youth involved with the child welfare or juvenile justice systems, and homeless youth."

The department outlined a number of recommendations to address the problem, including "recogniz[ing] that mental health is an essential part of overall health" and "empower[ing] youth and their families to recognize, manage, and learn from difficult emotions."

HHS also recommended better data collection on youth mental health -- including more information "on the relationship between technology and youth mental health" -- as well as increasing access to mental health resources, supporting mental health "in educational, community, and childcare settings," and "address[ing] the economic and social barriers that contribute to poor mental health for young people, families, and caregivers."

Free support is available for anyone struggling with thoughts of suicide, self-harm, or any mental health crisis by calling or texting the newly recreated three-digit National Suicide Prevention Lifeline, 988.