The COVID-19 pandemic has been stressful for many people, including Michelle Obama.

The former first lady opened up about her mental health in the newest episode of her eponymous podcast.

Obama, 56, admitted on Wednesday that the pandemic -- along with the current administration's response -- has placed her on an emotional rollercoaster. "I know that I am dealing with some form of low-grade depression," the Grammy Award-winner detailed, adding that she has "gone through those emotional highs and lows" where she doesn't feel like herself.

Obama noted that she is not alone in feeling this way because "spiritually, these are not fulfilling times."

The former FLOTUS detailed that, along with concerns over COVID-19, she is also affected by the "racial strife" dividing the nation.

"Part of this depression is also a result of what we're seeing in terms of the protests [and] the continued racial unrest that has plagued this country since its birth," she said.

MORE: 8 apps to support your mental health during the coronavirus pandemic

Dr. Victor Fornari, a psychiatrist at Zucker Hillside Hospital in New York, commended Obama for speaking out on her mental health battle in a statement obtained by ABC News.

"During these unprecedented times, heightened anxiety and depressed mood have been quite prevalent," Dr. Fornari shared. "Although the lifetime rate of depression is about one in five nationally, generally, 10 percent of the U.S. population experiences a depressive episode each year lasting more than two weeks. Stressors that may contribute to the development of an episode of depression can include financial hardship, illness, loss, as well as other stressful life events."

We've all been dealing with a lot of change in our lives and our communities. We've experienced the shock—and the aftershocks—of the killings of George Floyd, Breonna Taylor, and Ahmaud Arbery. And all this is happening amid this life-altering pandemic, which has upended so much of life as we've always understood it. All this change can feel pretty heavy—and we're often left to deal with it at a moment when we're forced to spend more time alone—more time in our own heads—than we're used to. I couldn't think of anyone better to talk about all of this with than my friend and confidante, @michele__norris. In the next episode of The #MichelleObamaPodcast, we're talking about life during this strange and exhausting time. You can listen to our conversation now on @Spotify—link in my bio.

"The Covid-19 pandemic has been the source of enormous stress for everyone," his statement continued. "This, coupled with the racial injustice and the tragic murder of George Floyd, has unleashed an enormous outpouring of frustration and demand for racial equality and demand for change. Through the brave self-disclosures of prominent individuals like Mrs. Obama, it is hoped that others will seek care and not feel embarrassed or ashamed of their emotional struggles."

Above all else, Michelle Obama noted that "watching the hypocrisy of [the current administration] day in and day out is dispiriting." 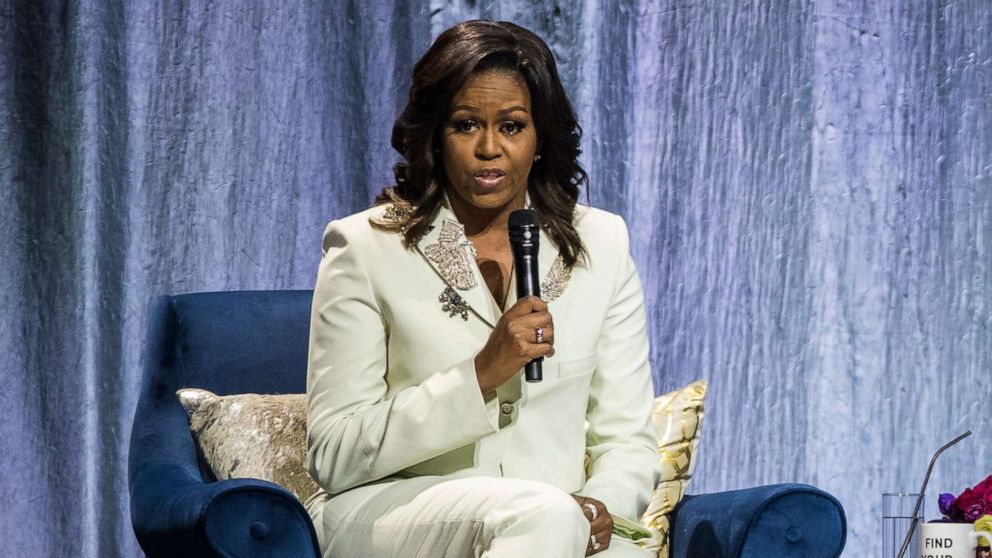 Michael Campanella/Getty Images
Michelle Obama speaks during her "Becoming: An Intimate Conversation with Michelle Obama" Tour at the Ericsson Globe Arena on April 10, 2019 in Stockholm, Sweden.
MORE: How to get free mental health help during the coronavirus pandemic

"Waking up to the news, waking up to how this administration has or has not responded, waking up to yet another story of a Black man or a Black person somehow being dehumanized, or hurt or killed or falsely accused of something ... it is exhausting," she said "It has led to a weight that I haven't felt in my life in a while."

MORE: Michelle Obama reveals why she fell in love with Barack on 1st episode of her podcast

Obama says she has been "staying in a routine" to help improve her moods, from working out to playing card games with her husband Barack Obama and their daughters Sasha and Malia each night.

"We will get through this," the "Becoming" author assured, adding that the nation has faced tough times before and only grew stronger.