Who better for Michelle Obama to interview on the debut of her podcast than her husband, Barack Obama.

The "Becoming" author welcomed the former president, whom she called a "special someone," for the first episode of "The Michelle Obama Podcast" on Spotify, which launched Wednesday.

SLIDESHOW: Michelle Obama through the years

In the nearly 49-minute episode, the couple spoke about their different upbringings in Chicago, their early years together and their time in lockdown amid the COVID-19 pandemic.

"Like most Americans, we've been spending a lot of time together in quarantine," the former first lady, 56, began.

"It's just a fact," Michelle replied, laughing. "There wasn't a judgment." 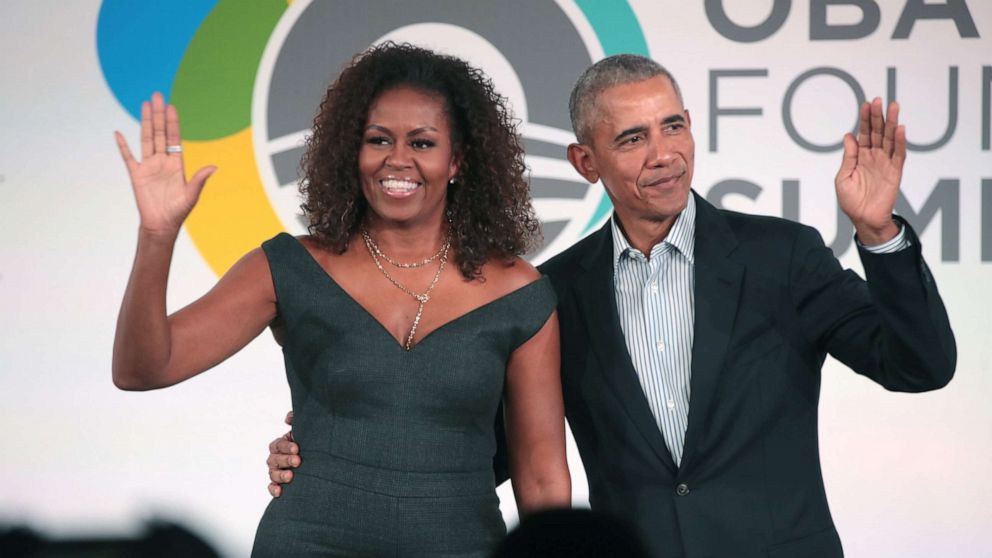 Scott Olson/Getty Images
Former President Barack Obama and his wife Michelle close the Obama Foundation Summit together on the campus of the Illinois Institute of Technology, Oct. 29, 2019, in Chicago.

"We've had a great time. We've had some interesting conversations because these are some crazy times," she continued, getting to the heart of her inaugural episode. "We've spent a lot of time talking about how our views of community shape who we are, shape our choices and shape our reactions."

As for what initially drew Michelle to Barack back in the day, she admitted, "You know that at the core of everything you have done politically, what I know about you as a person and one of the reasons why I fell in love with you is --"

Barack interrupted his wife and joked that "it wasn't just my looks" that attracted her to him.

"You're cute, you know," she teased back. "But no, one of the reasons I fell in love with you is because you are guided by the principle that we are each other's brother's and sister's keepers. And that's how I was raised!"

Barack also spoke about the current pivotal time in our country, both socially and politically -- specifically referencing the protests in the wake of George Floyd's murder. He said he is glad to see young people demanding change, and hopes they don't get jaded and forget that their voice matters.

"I know a lot of you are hurting out there right now and are confused and that's OK," Michelle added. "But as I've seen, as Barack has seen, we can take that anger, that disappointment and turn it into something useful. Perhaps, even something hopeful. But we just have to keep having those conversations because once we start the conversation there is no telling where it will go."

Listen to the first episode of "The Michelle Obama Podcast" in full here: