The suspenseful South Korean film, which focuses on class distinction through the relationships of the Park and Kim families, also won the Oscar for best international feature film, best original screenplay and best director.

It had also been nominated for best production design and best film editing.

"It still feels very surreal," he told reporters through a translator backstage after the Oscars. "I feel like something will hit me and I will wake up from this dream."

The director described a "very special" feeling when he won the Oscar for best director, a category that included Quentin Tarantino, Sam Mendes, Todd Phillips and Martin Scorsese.

"I was able to lock eyes with Martin, Sam, Ty and everyone," Bong Joon-ho told "Good Morning America"'s Lara Spencer. "I didn't know where they were sitting, but I just knew immediately where they were and I could feel the emotion."

"It's just very special feeling to share," he said.

His co-producer, Kwak Sin Ae, added that she believed winning the award would "signal the beginning of a different kind of change for international cinema."

"I can't even imagine the atmosphere in Korea now," she added.

Here's what you need to know about "Parasite": 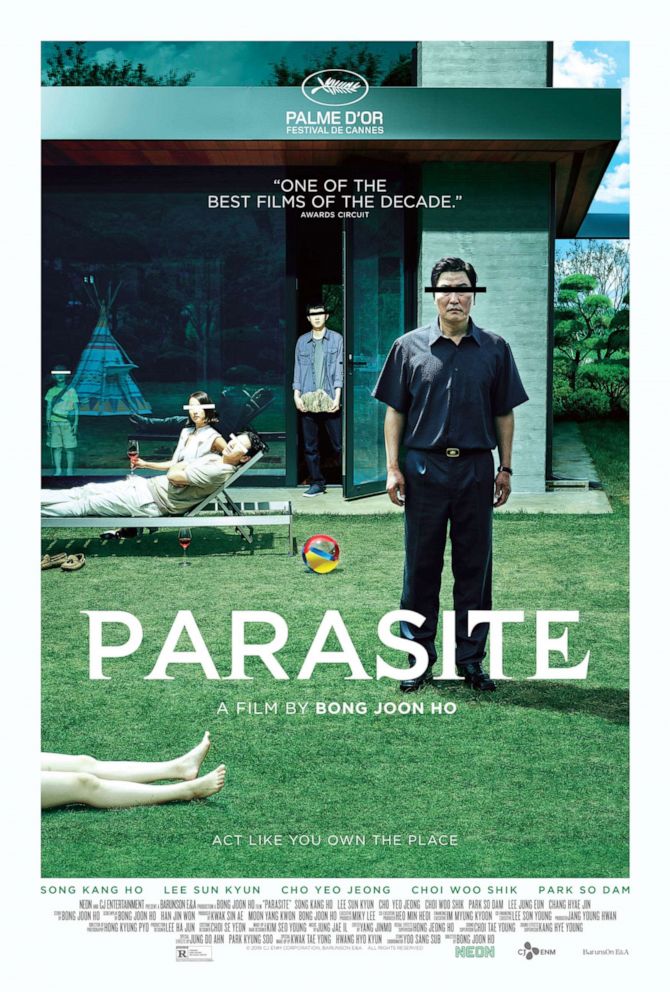 NEON
A poster for the movie, "Parasite."

1. The film is one of many firsts and made history

The film, which boasts a slew of notable talent including Song Kang Ho, Jang Hye Jin, Choi Woo Shik and Park So-dam, has already had an extremely successful run during award season.

It won the Palme d’Or at the Cannes Film Festival, the award for best motion picture - foreign language at the 2020 Golden Globes, the SAG award for outstanding performance by a cast in a motion picture and the best original screenplay at the 2020 Writers Guild Awards among many other awards.

0:24
Bong Joon Ho talks to Lara Spencer after winning in several categories at the Oscars for "Parasite."

When you make history. #Oscars

In an interview with ABC News' Chris Connelly, Bong Joon-ho spoke about the recognition the film is garnering.

"It's a huge celebratory moment for Korean cinema because it's the first time a Korean film has been nominated," he said through a translator. "And personally for me, it's been 20 years since I've become a film director and so to receive this nomination in 2020 is usually meaningful." 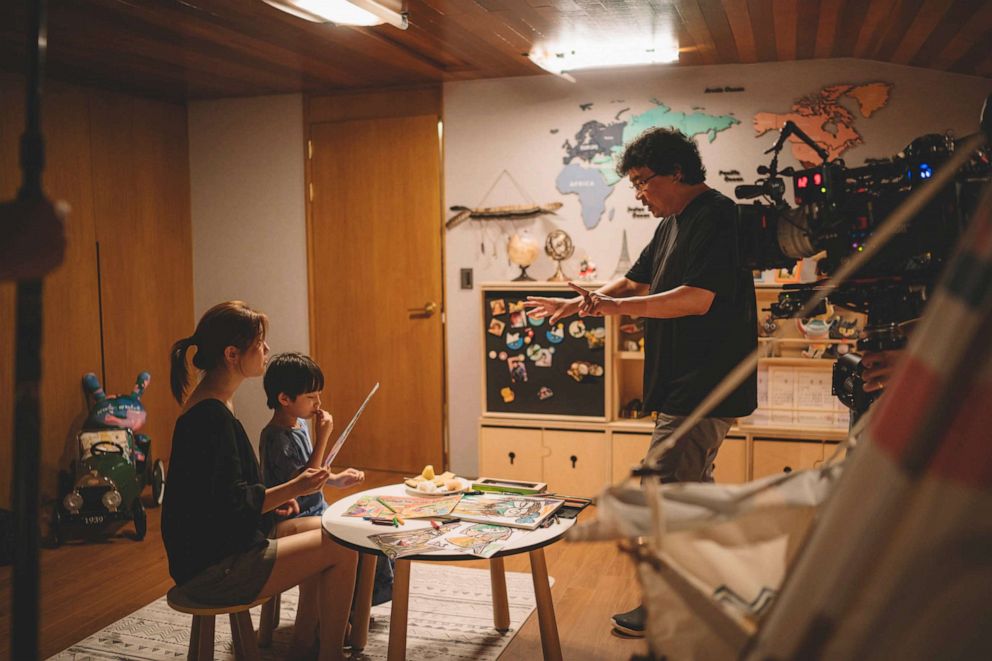 NEON
So-dam Park and Director Bong Joon Ho on the set of the film, "Parasite."

He also spoke about the main message he wanted to convey through his artistry in the film.

"Although the story is about the rich and poor, I think ultimately I wanted to explore how we can truly live as human beings and why is it so difficult to live a dignified life as just an individual," he shared. "I think that's something that applies to the U.S., to Europe, Japan, it applies to any country all over the world."

MORE: How to watch Oscar-nominated films from home

2. It's a major hit at the box office

Since its release date in October 2019, the film has grossed over $30 million domestically and over $163 million worldwide.

"I never expected the film to gain this much buzz, and a couple of days ago the box office surpassed $30 million in North America," he shared. "These are reactions that we never anticipated, so I'm very happy. I'm very glad that I was able to share the cinematic excitement and joy and the thematic exploration that this film provides."

"The way the audience has been able to overcome the subtitles has been great to watch," he added.

He also spoke about the need to look past subtitles in order to appreciate the world of cinema while accepting the award for best foreign language film at the Golden Globes.

"Once you overcome the 1-inch-tall barrier of subtitles, you will be introduced to so many more amazing films," he said.

"Just being nominated along with fellow amazing international filmmakers was a huge honor. I think we use only one language: the cinema," he added.

3. Bong Joon-ho has already cemented his status as an accomplished, well-known filmmaker

Bong has many notable projects under his belt already.

He discussed influences in the history of film that inspired him growing up, noting he would watch pictures from the United States on American Forces Korea Network.

"The channel isn't on TV anymore, but when I was little it was popular and they played American films that were not censored," he shared. "Although I didn't know English at the time, I watched all those films and imagined the story on my own. For me, it was my own personal small cinema tech."

He added that at the time he didn't have an understanding "of the movies or the cast," but later recognized them when he was older in cinema club.

Brian De Palma, Sam Peckinpah, John Schlesinger and Francis Ford Coppola were a few of the renowned directors he later recognized from studying film as a child.

4. The house featured in the film takes on a life of its own

One of the most remarkable aspects of the film is the Parks' home, where much of the plot unfolds. The differences between the property the upper class family is living in -- as well as the complex, different layers the home holds -- and the Park's family home is an essential element in understanding class distinction in the thriller.

Production designer Lee Ha Jun revealed that everything from the way in which the homes were built to the colors of the sets were heavily considered in production.

"First of all, director Bong said precisely ... the movement has to continuously go from top to bottom. Including the semi-basement home, everything had to have contrast," he told Deadline. "As you come down from the rich family’s home, the look of the neighborhood has to slowly change."

The iconic Park and Kim family homes in #PARASITE were designed and created from scratch on massive stages in Korea.

Over 1,400 VFX were used to bring these environments to life and over 130,000 gallons of water were used to flood the Kims' home in the film’s thrilling climax. pic.twitter.com/ZE257t5KL4

On the contrast in colors used in set design, Jun told Deadline: "Director Bong wanted the higher class to have monotonous and luxurious colors. For the lower class, he wanted the combination of complicated and diverse colors and textures."

The director also spoke to ABC News about why the set design was so particular in the film.

"We built that house from scratch and because 60% of the story happens in the rich house, we put in a lot of effort to make sure it feels like its own universe and a main character of the film," the director said. "That's why we were so happy when the production designer was nominated."

MORE: Female directors were snubbed in 2020 Oscar nominations -- here's what can be done

Cho Won Woo, who handled set decoration for the film, is also nominated alongside Lee Ha Jun in the category.

5. American audiences are getting familiar with notable South Korean talent

With the tremendous success of the film, viewers in North America are getting acquainted with established names in the film industry from South Korea. 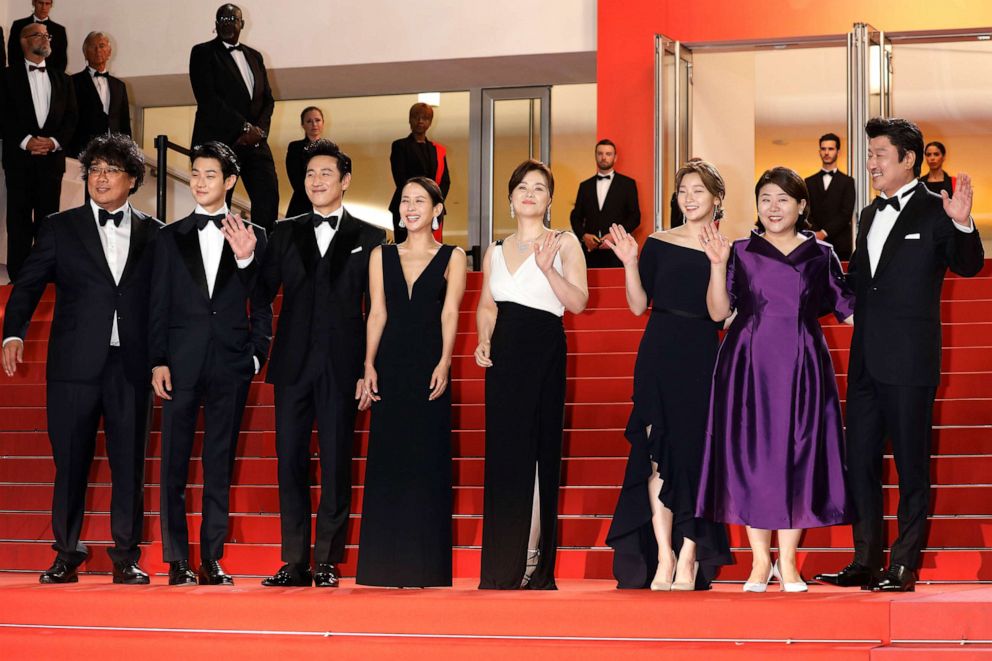 Song Kang Ho has worked with Bong Joon-ho before, appearing in the director's thrillers "Snowpiercer" and "The Host." 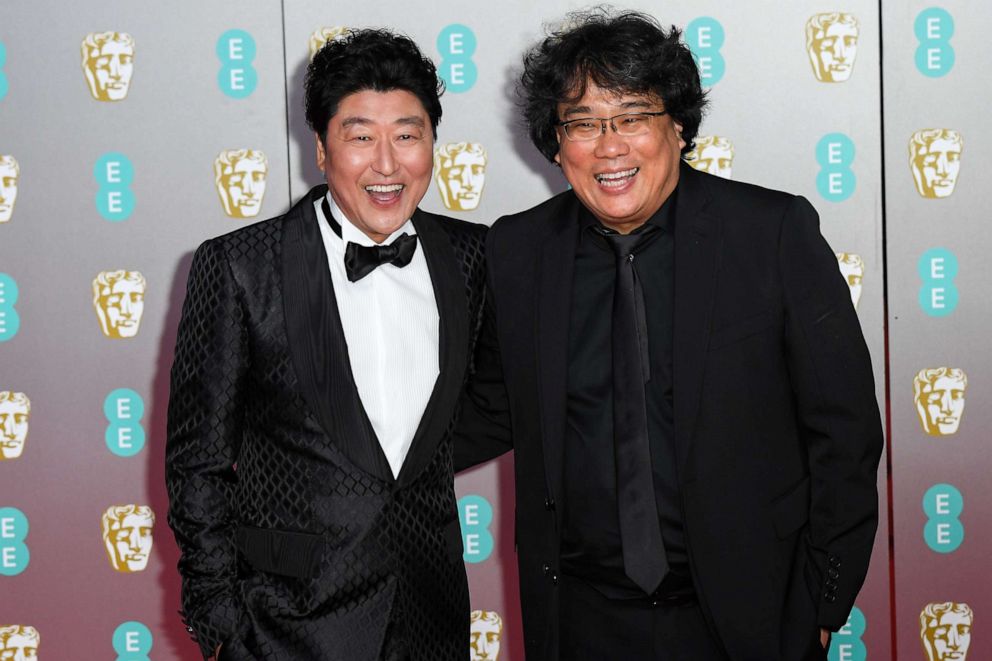 The actor reflected on their works together in an interview with Deadline.

"When I look back at the past 20 years, and consider the films we’ve made together, they’re not just the best films either of us have made; they’re also some of the best films in Korean cinema," he said on working with Bong Joon-ho.

Editor's note: A version of this story was originally published on Feb. 7.