A member of British royalty, Prince Harry, got to meet a member of American rock royalty, Jon Bon Jovi, Friday when the two came together in support of Harry's Invictus Games.

Harry visited London's famous Abbey Road Studios to meet Bon Jovi, who traveled to the U.K. to re-record his single "Unbroken" with the Invictus Games Choir.

Harry and the rocker joined with Invictus Games athletes to recreate the famous Beatles photo outside Abbey Road Studios, where the Beatles recorded a majority of their albums. 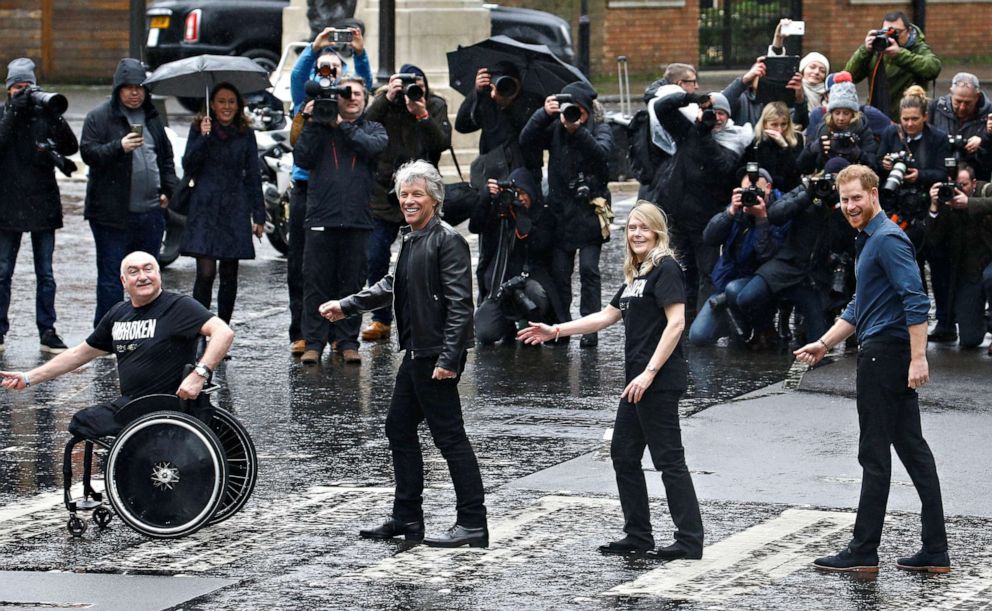 Harry, who served in the British Army, founded the Invictus Games in 2014 as a Paralympic-style competition for wounded service members.

Bon Jovi's song "Unbroken" was created "to shine a spotlight on veterans living with post traumatic stress disorder (PTSD) and honor their service," according to Buckingham Palace.

"That was awesome," Harry said after listening to the choir perform the song with Bon Jovi.

Behind the scenes with Harry and @jonbonjovi. The duke’s reaction to the @InvictusGChoir’s work on #Unbroken? “Awesome!” pic.twitter.com/YXgNB2xSPh

To celebrate the collaboration, the Band of the Scots Guards played a medley of Bon Jovi songs at the changing of the guard at Buckingham Palace.

🎺Guard Change at Buckingham Palace!
Today the @ScotsGuardsBand played a special @BonJovi medley to celebrate his collaboration with @WeAreInvictus ! The Queen’s Guard handed over responsibility for protecting Buckingham Palace and St James’s Palace to the New Guard. pic.twitter.com/2KRFDsc2ac

Prince Harry and his wife Duchess Meghan plan to attend the 2020 Invictus Games, which will be held in May in The Hague, Netherlands.

Prince Harry has arrived at @AbbeyRoad Studios to join #JonBonJovi and the @InvictusGChoir as they re-record his single “Unbroken” to raise money for the @WeAreInvictus🎵 pic.twitter.com/uOWj1sdk2o

The Invictus Games is a personal cause for Harry and one of the initiatives he plans to continue to support after he and Meghan leave their roles as working members of Britain's royal family next month. Their last day is March 31 and the couple's office at Buckingham Palace, their headquarters for the past year, will be closed the next day, April 1.

Harry returned to the U.K. earlier this week for the first time since late January, when he and Meghan agreed to the terms for their departure from official royal duties. Meghan will also return to the U.K. shortly and will join Harry at their final events as working royals.

The Sussexes, currently living on Vancouver Island with their son Archie, have not yet revealed publicly where they plan to live full-time, though they do plan to spend the "majority of their time" in North America, according to Buckingham Palace.

Canadian authorities announced Thursday they will no longer provide security protection for Harry and Meghan once they begin their new roles as non-working members of the royal family.

MORE: Prince Harry flies commercial and asks to be introduced as just Harry at <a href="https://abcnews.go.com/alerts/scotland" id="_ap_link_Scotland_Scotland_" target="_blank">Scotland</a> event

"The Duke and Duchess of Sussex choosing to re-locate to Canada on a part-time basis presented our government with a unique and unprecedented set of circumstances," Canada’s Office of the Minister of Public Safety said in a statement. "The RCMP has been engaged with officials in the UK from the very beginning regarding security considerations."

"As the Duke and Duchess are currently recognized as Internationally Protected Persons, Canada has an obligation to provide security assistance on an as needed basis," the statement continued. "At the request of the Metropolitan Police, the RCMP has been providing assistance to the Met since the arrival of the Duke and Duchess to Canada intermittently since November 2019. The assistance will cease in the coming weeks, in keeping with their change in status.”

Buckingham Palace has not commented on funding for Harry and Meghan's security.

MORE: Prince Harry and Meghan will not use Sussex Royal name, spokesperson confirms

The couple said in a statement on their website they will "continue to require effective security" but could provide "no further details."

"It is agreed that The Duke and Duchess of Sussex will continue to require effective security to protect them and their son," they said on SussexRoyal.com. "This is based on The Duke’s public profile by virtue of being born into The Royal Family, his military service, the Duchess’ own independent profile, and the shared threat and risk level documented specifically over the last few years. No further details can be shared as this is classified information for safety reasons."