Prince Harry and Meghan, the Duke and Duchess of Sussex, completed their final engagement Monday as working members of the royal family.

Harry and Meghan joined Queen Elizabeth, Prince Charles and Camilla and Prince William and Kate at a service at Westminster Abbey to mark Commonwealth Day in the U.K.

The crowd gathered outside Westminster Abbey cheered at the arrival of Harry and Meghan, who dressed in all-green for her final engagement. She wore a green dress and cape by Emilia Wickstead, one of the royal family's go-to designers, green hat by William Chambers, green purse by Gabriella Hearst and nude heels by Aquazzura. 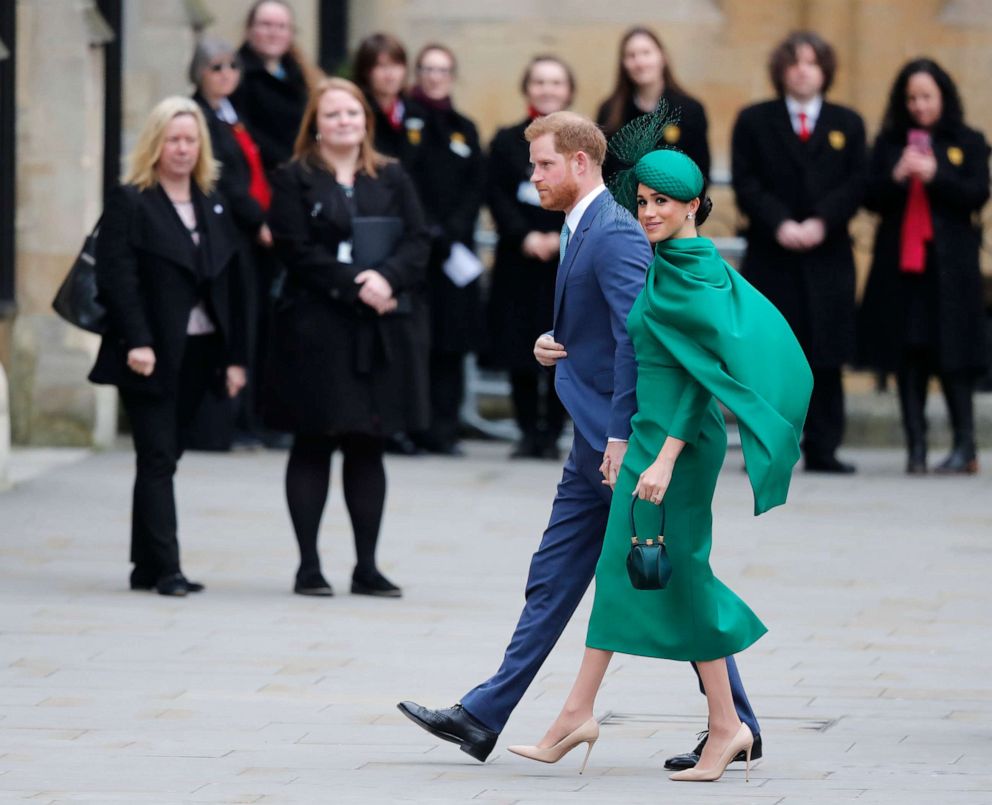 The event marked the first time in months that Harry and Meghan have been seen publicly with Harry's brother William and sister-in-law Kate. Meghan and Harry joined Queen Elizabeth for church on Sunday in Windsor.

Harry and Meghan and William and Kate did not take part in the royal procession this year, instead going straight to their seats inside Westminster Abbey. The procession included just Queen Elizabeth followed by Prince Charles and Camilla, Duchess of Cornwall. 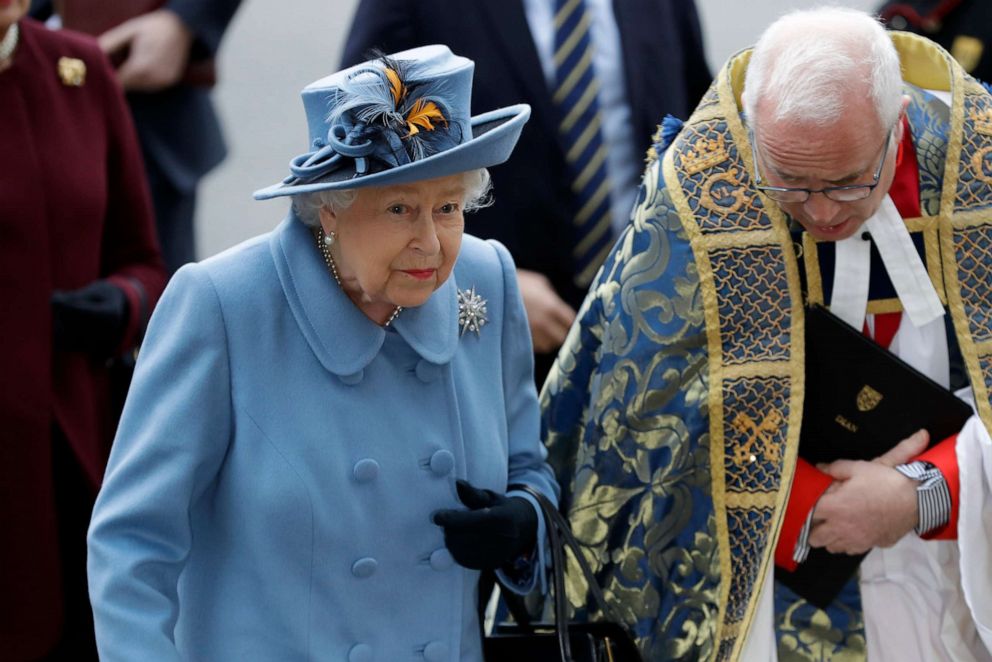 Harry and Meghan's official last day as working royals is March 31 and their Buckingham Palace office will close on April 1. The couple is expected to return soon to Canada to reunite with their 10-month-old son Archie.

It is not yet known whether Harry and Meghan, who have been living on Vancouver Island, will make Canada their permanent home base. They will keep their Frogmore Cottage home in the U.K. but plan to spend the "majority of their time" in North America, according to Buckingham Palace. 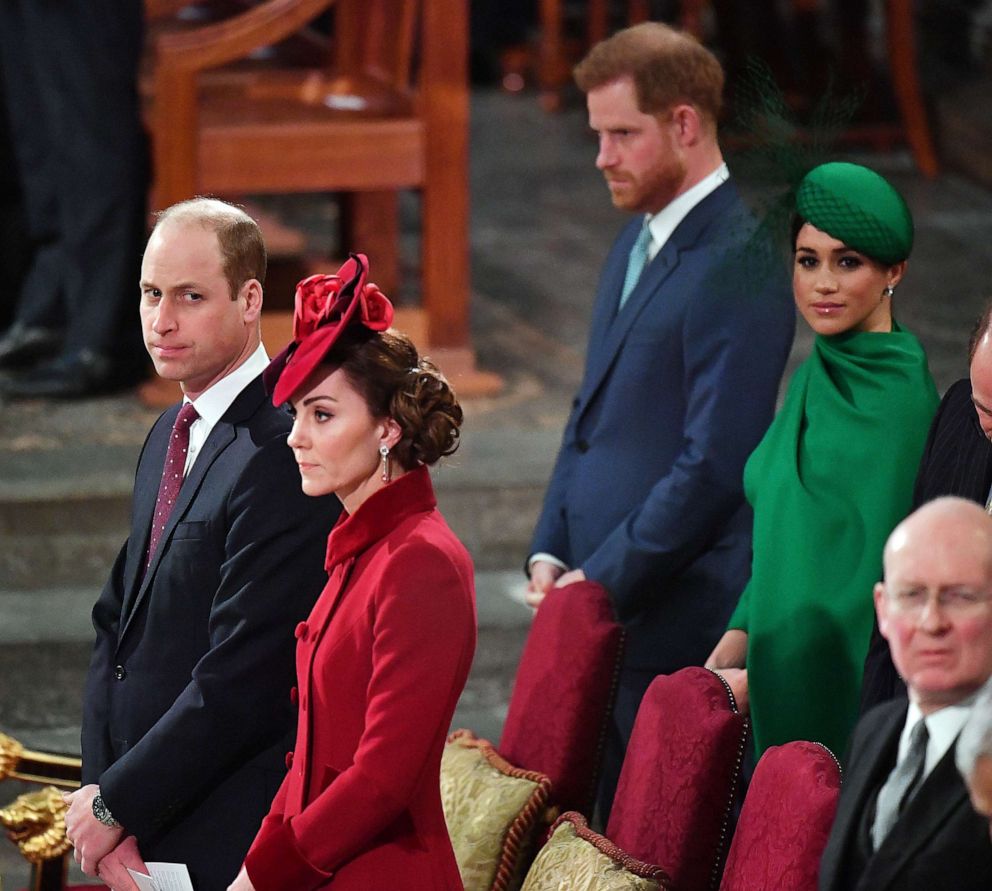 Monday's Commonwealth Day service concluded a whirlwind series of recent appearances by Harry and Meghan as they wrapped up their royal duties.

Harry attended several solo engagements last week and was joined later in the U.K. by Meghan, who met privately with several of her patronages and surprised students on Friday for a celebration ahead of International Women's Day.

With today’s Commonwealth Service marking The Duke and Duchess of Sussex, Meghan and Harry’s last official duty as members of the Royal Family I thought I would share some of my favourite photographs from the last couple of years.... 📸 pic.twitter.com/cwznRWq8cA

The duo attended the Endeavour Fund Awards on Thursday night and the Mountbatten Music Festival at Royal Albert Hall on Saturday night, where they received a standing ovation.

"It was the last time that Harry wore his Captain General of the Royal Marines uniform and you could see from the couple, particularly when they had that standing ovation from the audience, how difficult it was to keep it together for those final moments," said ABC News royal contributor Omid Scobie. "The past few days of engagements, it's been a reminder to the world just how much Harry and Meghan brought to the royal family."

"They were really bringing the house of Windsor into the 21st century at lightning speed and that has come to a crashing halt now," he added.

In their new roles as non-working members of the royal family, Harry and Meghan will retain but no longer use their HRH titles, will no longer represent the queen and will not receive public funds for royal duties.

The couple plans to start a nonprofit organization, with more details expected to be announced later this year.

Both Harry and Meghan attended a reported speaking engagement in Miami on Feb. 6 for JPMorgan, the U.S.-headquartered global financial services firm, according to a royal source.

The couple also visited San Francisco and stopped by Stanford University earlier this week for a brainstorm session and meetings with professors and academics as they lay the groundwork for their new charitable entity, a source close to the Sussexes confirmed to ABC News.