Queen Elizabeth has told her grandson Prince Harry that he would always be welcome back as a working royal.

The confirmation from Harry's beloved grandmother came during a lunch the pair had at Windsor Castle on Sunday, a royal source confirmed to ABC News.

The meeting was a private one between Harry and Queen Elizabeth, away from courtiers and palace staff. The pair talked grandmother to grandson, according to the source. 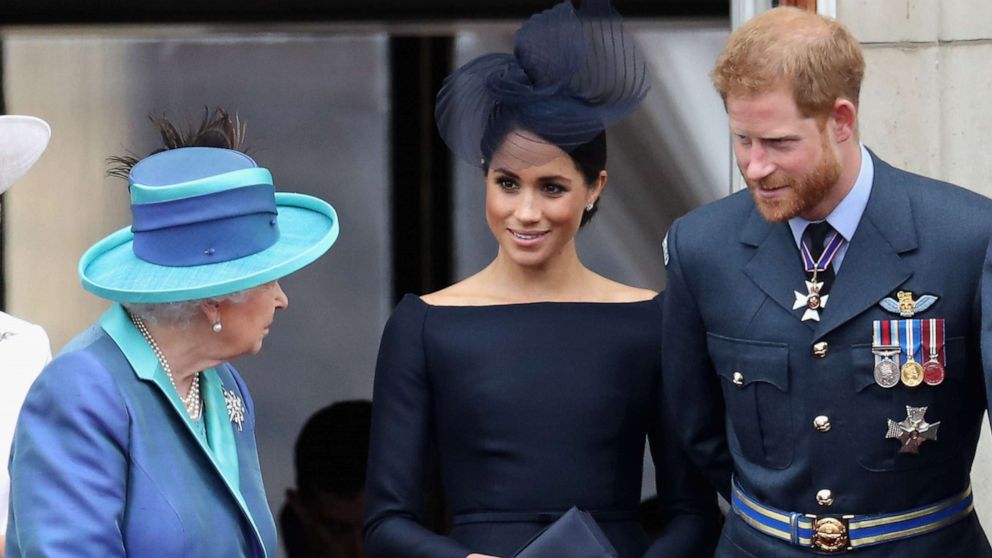 Chris Jackson/Getty Images, FILE
Queen Elizabeth II, Meghan, Duchess of Sussex, Prince Harry, Duke of Sussex watch the RAF flypast on the balcony of Buckingham Palace, as members of the Royal Family attend events to mark the centenary of the RAF on July 10, 2018 in London.

It marked the first time Harry and the queen had met in person since their summit at Sandringham in January with Prince Charles and Prince William at the height of the frenzy surrounding Harry and his wife Duchess Meghan's decision to step back from their roles as senior members of the royal family.

MORE: Prince Harry jams with Jon Bon Jovi in one of his last events as a working royal

Under guidelines announced by Buckingham Palace shortly after the summit, Harry and Meghan will retain but no longer use their HRH titles, will no longer represent the queen, will not receive public funds for royal duties and will spend the "majority of their time" in North America.

Harry and Meghan's last day as working members of Britain's royal family will be March 31. The couple's office at Buckingham Palace, their headquarters for the past year, will be closed the next day, April 1.

Harry is back in the U.K. in his final trip as a working royal. He is finishing his royal engagements and will soon be joined by Meghan.

The pair will join Queen Elizabeth and the rest of the royal family at the Commonwealth Day service next Monday, March 9, for their last official event as working royals.

MORE: Prince Harry flies commercial and asks to be introduced as just Harry at Scotland event

Harry and the queen's meeting was the first time the pair had met in person since she ruled that Harry and Meghan must drop the word royal from their Sussex Royal branding moving forward.

The Duke and Duchess of Sussex appeared to push back against the decision in a blistering statement on their website, SussexRoyal.com.

"While there is not any jurisdiction by The Monarchy or Cabinet Office over the use of the word ‘Royal’ overseas, The Duke and Duchess of Sussex do not intend to use ‘Sussex Royal’ or any iteration of the word ‘Royal’ in any territory (either within the UK or otherwise) when the transition occurs Spring 2020," the couple wrote, adding that their "digital channels" will be updated this spring "as they introduce the next exciting phase to you."

The couple -- who also seemed to push back on their website against other parts of the separation agreement -- have been traveling to the U.S. as they chart their new path.

Harry and Meghan traveled to Miami to attend an event hosted by JPMorgan, where they rubbed shoulders with billionaires and celebrities, and also visited San Francisco and Stanford University for a brainstorm session and meetings with professors and academics as they lay the groundwork for their new nonprofit entity.