Prince Harry and Meghan Markle are no longer "working members" of the royal family, according to Buckingham Palace.

With the queen's blessing, the Duke and Duchess of Sussex are embarking on the "next chapter of their lives" by stepping back from their royal duties and will no longer receive public funds.

The new arrangement goes into effect in the spring of 2020 and will be reviewed in a year's time.

"He was given the opportunity to serve as a member of the royal family but he has essentially abdicated from that and it’s all been put into abeyance."

Alastair notes that the children of the Earl of Wessex -- Harry’s uncle -- have also chosen not to use their HRH titles, or have their titles in abeyance, so Harry and Meghan are not unique in this respect.

Both will still be known as the Duke and Duchess of Sussex, according to a palace source.

"Harry, Meghan and Archie will always be much loved members of my family," Queen Elizabeth said in a statement. "It is my whole family’s hope that today’s agreement allows them to start building a happy and peaceful new life."

They are still members of the royal family and will attend family events like Trooping the Colour when invited by the Queen, according to a palace source.

However, from now on, the Duke and Duchess of Sussex cannot travel on behalf of the queen, will not receive any public money and will not appear in the court circular, Bruce said.

“After many months of reflection and internal discussions, we have chosen to make a transition this year in starting to carve out a progressive new role within this institution. We intend to step back as ‘senior’ members of the Royal Family and work to become financially independent, while continuing to fully support Her Majesty The Queen. It is with your encouragement, particularly over the last few years, that we feel prepared to make this adjustment. We now plan to balance our time between the United Kingdom and North America, continuing to honour our duty to The Queen, the Commonwealth, and our patronages. This geographic balance will enable us to raise our son with an appreciation for the royal tradition into which he was born, while also providing our family with the space to focus on the next chapter, including the launch of our new charitable entity. We look forward to sharing the full details of this exciting next step in due course, as we continue to collaborate with Her Majesty The Queen, The Prince of Wales, The Duke of Cambridge and all relevant parties. Until then, please accept our deepest thanks for your continued support.” - The Duke and Duchess of Sussex For more information, please visit sussexroyal.com (link in bio) Image © PA

Prince Harry is losing his military titles and patronages including Captain General Royal Marines, Honorary Air Commandant Royal Air Force Honington and Small Ships and Diving, Royal Naval Command: Commodore in Chief. He will also no longer be a Commonwealth Youth Ambassador. Harry and Meghan will keep their roles at the Queen's Commonwealth Truth -- Harry serves as president and Meghan is vice-president.

Harry losing his honorific military titles may be a particular sacrifice for him as they were important to him, especially his title as Captain General Royal Marines which he inherited from his grandfather, Prince Philip.

And Prince Andrew can no longer perform his military roles so the British military has lost a fair amount of royal support in recent. 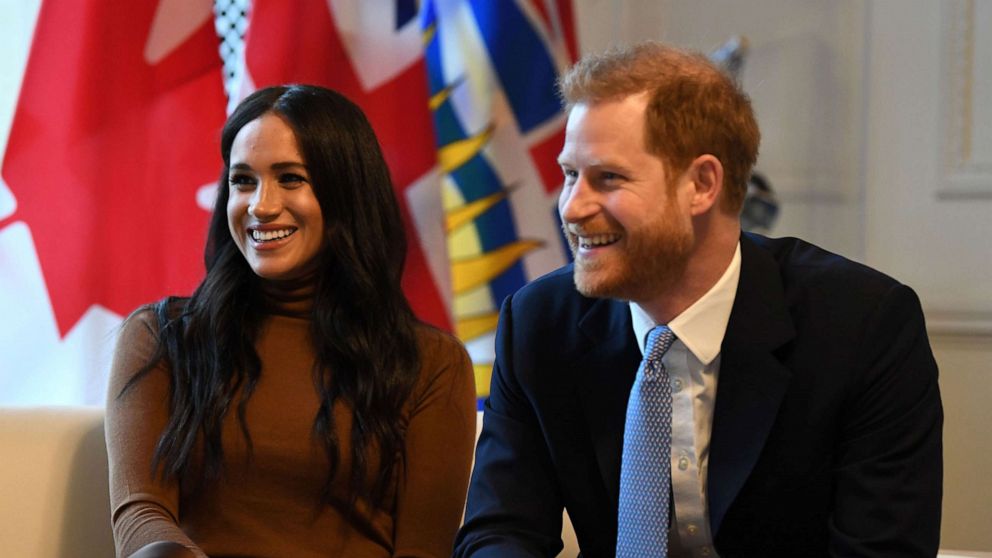 Daniel Leal-Olivas/POOL/AFP via Getty Images
Britain's Prince Harry, Duke of Sussex and Meghan, Duchess of Sussex react during their visit to Canada House in thanks for the warm Canadian hospitality and support they received during their recent stay in Canada, in London on Jan. 7, 2020.

"The Duke and Duchess of Sussex have shared their wish to repay Sovereign Grant expenditure for the refurbishment of Frogmore Cottage, which will remain their UK family home," according to a statement from the palace.

The couple will repay some 2.4 million pounds of taxpayers’ money that was spent renovating their home near Windsor Castle, according to the Associated Press.

The Sussexes will obtain publicly funded security as they make their way to North America for a majority of their residence.