Prince Harry and Meghan, the Duke and Duchess of Sussex, will spend this Christmas, their first as parents to son Archie, apart from the rest of the royal family.

The duke and duchess will instead spend the Christmas holiday with Meghan's mother, Doria Ragland, a spokesperson for the Sussexes confirmed Wednesday.

It is not yet known where the U.K.-based Sussexes will spend Christmas with Ragland, who lives in Los Angeles. 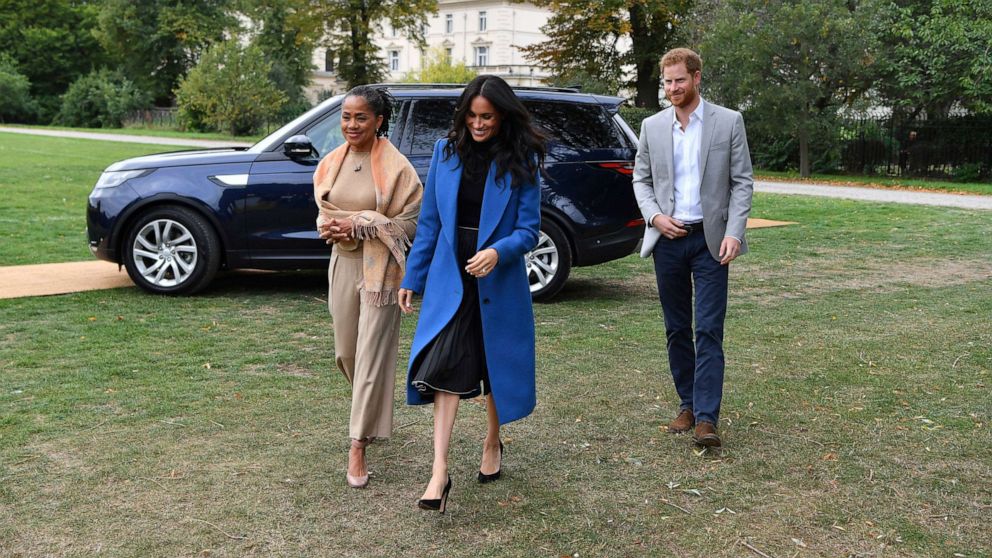 Ben Stansall/AP, FILE
In this Sept. 20, 2018, file photo, Meghan, the Duchess of Sussex, accompanied by Prince Harry, the Duke of Sussex and her mother Doria Ragland, walk to attend a reception at Kensington Palace, in London.

Harry and Meghan's decision to skip spending the holiday at Queen Elizabeth’s 20,000-acre Sandringham home in Norfolk, England, has the queen's support, according to the spokesperson.

The duke and duchess have spent the last two Christmases at Sandringham, where Britain's royal family gathers for Christmas traditions that date back centuries.

Meghan was in 2017 the first fiancé in royal history to be invited by Queen Elizabeth to celebrate the Christmas holiday with the royal family at Sandringham. She and Harry stayed with Prince William and Kate at their Anmer Hall home in nearby Norfolk for the three-day-long celebration that is the royals' Christmas tradition.

Last year Meghan was pregnant with Archie when she spent her first Christmas as a member of the royal family at Sandringham.

Harry and Meghan's decision to spend the holiday with Ragland is understandable -- she and Meghan are close and it will be Ragland's first Christmas as a grandmother -- but it is also likely to further flame the rumors of a divide between Harry and Meghan and other members of the royal family.

The duke and duchess were candid in a recent documentary about the struggles they face living their lives in the public eye.

Harry also specifically addressed in the documentary rumors of a rift between him and William, his older brother and only sibling.

"Part of this role and part of this job and this family being under the pressure that it's under, inevitably stuff happens," Harry said in "Harry and Meghan: An African Journey." "But look we’re brothers. We’ll always be brothers."

Since Harry and Meghan's wedding last year, the two brothers have split their royal households, divided their charitable foundations and lost their status as neighbors when Harry and Meghan moved from Kensington Palace to Frogmore Cottage.

Harry and William and Meghan and Kate, once known as the "royal fab four," made their first appearances together in recent weeks last weekend for Remembrance Sunday, a memorial day observed in the British Commonwealth to honor fallen military members of service.

Harry and Meghan are planning later this month to take some time off from royal duties and enjoy some family time, which will include visiting friends and family in the U.S.