Prince Harry shared his passion for the environment and conservation with young people from around the world Tuesday at an event with Dr. Jane Goodall, the legendary animal and environmental conservationist.

Harry and Goodall met at St. George’s House at Windsor Castle, where Goodall is holding a global leadership meeting for the Roots & Shoots organization she founded in 1991.

Harry later delivered an address to attendees and met with Roots & Shoots students who were selected to travel to Windsor to share their projects and discuss the issues affecting their fellow young people and communities.

"The good news is that young people like you don’t need to be convinced that we must urgently intervene [to help the planet]; you are actively doing this every single day, and your dedication to effecting change is outstanding," Harry said. "As my grandmother The Queen once said - ‘Sometimes the world’s problems are so big we think we can do little to help. On our own we cannot end wars or wipe out injustice, but the cumulative impact of thousands of small acts of goodness can be bigger than we imagine.’"

Roots & Shoots is focused on empowering young people to make a difference in the environment. Goodall started the organization with just 12 students in Tanzania and it is now supported around the globe by over 700,000 participants who range in age from preschool to college, according to its website.

Roots & Shoots helps students get involved in environmental work by offering one-click campaigns on its website and giving students instructions on how to design service campaigns to address pressing needs. 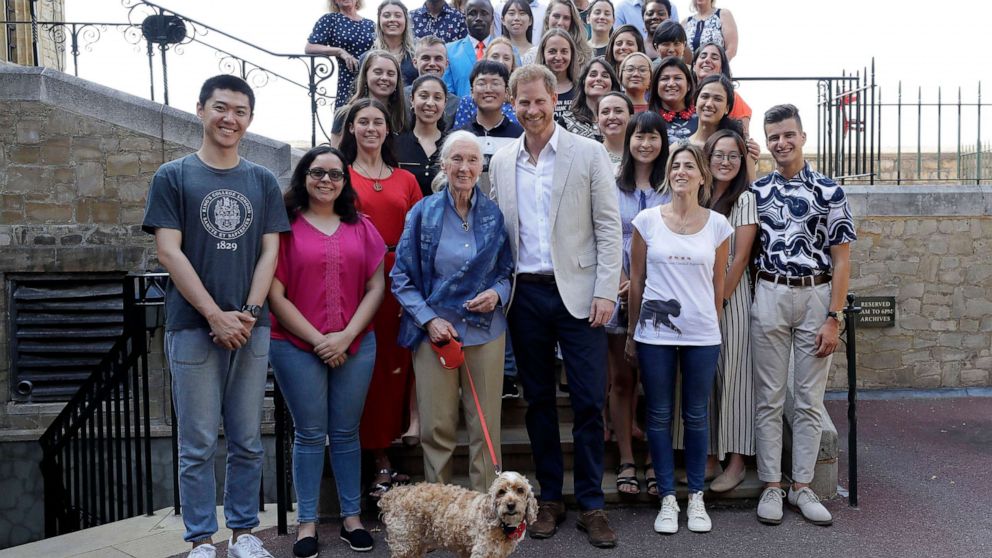 "Nearly three decades ago, as Dr. Goodall was launching efforts to improve welfare for captive chimpanzees and launch efforts to protect chimpanzees in the wild, she met young people around the globe who were apathetic about their future," a Jane Goodall Institute spokesperson told "Good Morning America." "They felt there was nothing they could do to fix the problems they saw around them."

"Dr. Goodall knew that if we had a generation of young people who didn’t care, who weren’t feeling empowered, then any effort for chimpanzees or the environment we share would be a waste," the spokesperson added. 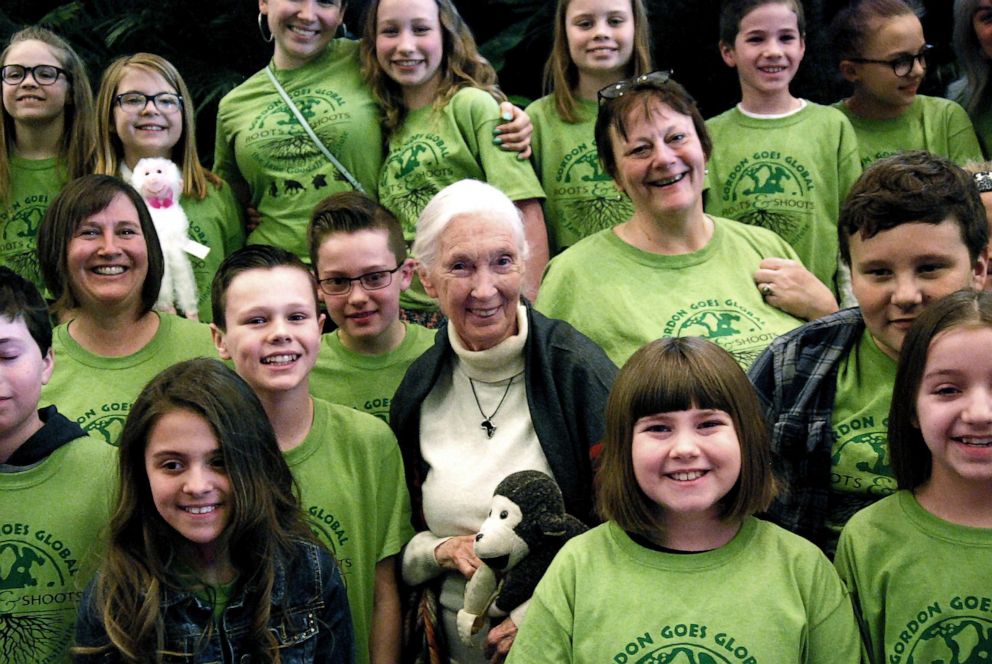 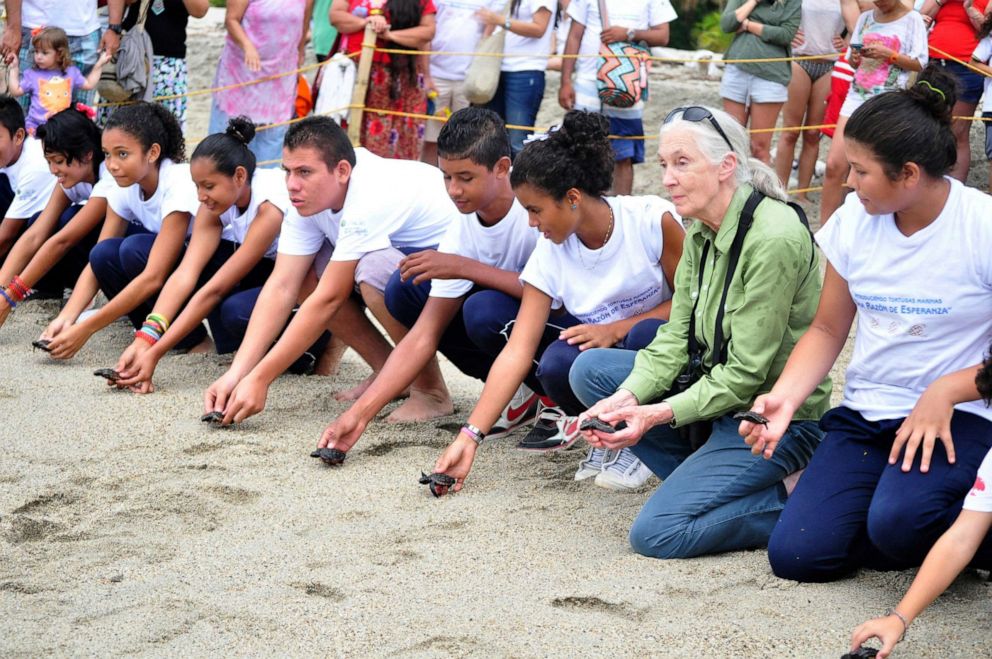 The students from 26 countries who are meeting Prince Harry and Goodall at Windsor Castle are all part of Roots & Shoots projects designed to address issues including climate change and global warming to animal protection, ocean pollution, unsustainable human lifestyles and conflict resolution.

"We know that [Prince Harry] is keenly involved in youth and global environmental issues and Dr. Goodall believes that his visit will inspire the participants knowing that someone of his stature is eager to learn of their efforts," the Jane Goodall Institute spokesperson said. "Those involved in Roots & Shoots are already making a vast difference in their countries to benefit the community, animals, including domestic animals and the environment we all share."

The organization's mission is a perfect fit for Prince Harry, who is both a vocal conservationist and a leader of young people in his roles as President of The Queen’s Commonwealth Trust and Commonwealth Youth Ambassador. 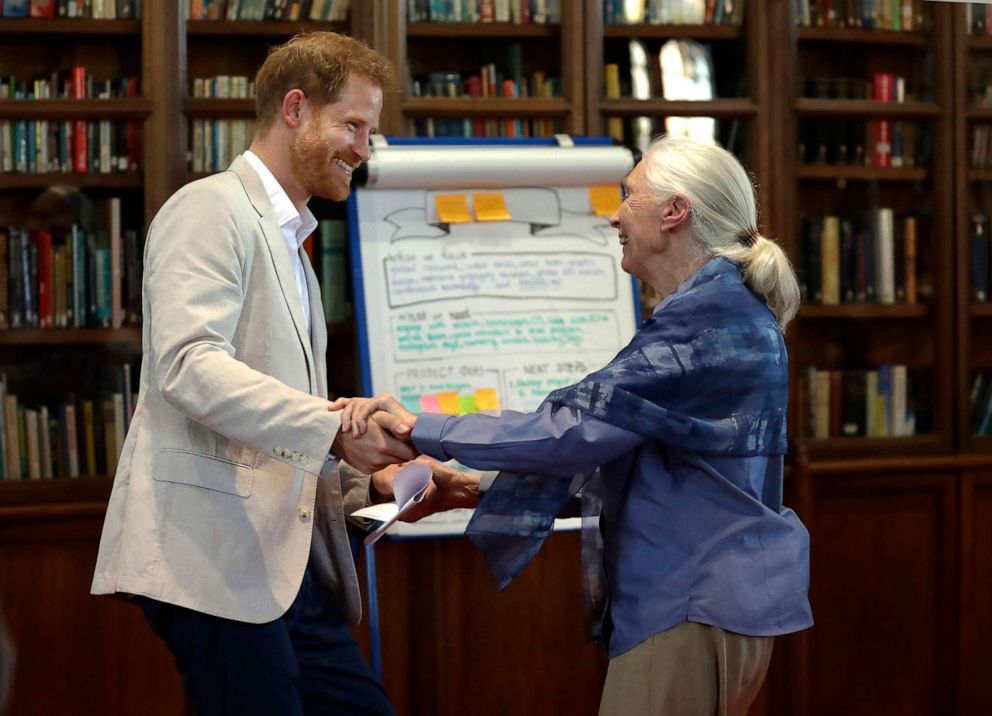 Two years ago, Harry, now a dad to son Archie, spent nearly three weeks in Malawi helping to relocate 500 elephants in danger of being killed by poachers. Harry is also patron of Rhino Conservation Botswana, an organization that works to help build the populations of rhinos in the wild.

This month, Harry and Meghan made a plea to their followers on Instagram to join efforts to save the planet, following in their tradition to change the accounts they follow each month to support a cause important to them. In July, it was the environment.

“There is a ticking clock to protect our planet -- with climate change, the deterioration of our natural resources, endangerment of sacred wildlife, the impact of plastics and microplastics, and fossil fuel emissions, we are jeopardizing this beautiful place we call home - for ourselves and for future generations. Let’s save it. Let’s do our part,” the post said.

Harry's conservation efforts, particularly in Africa, are expected to get even more of a high profile when he and Meghan, the Duchess of Sussex, visit South Africa this fall.

Both the Duke and Duchess of Sussex will visit South Africa on behalf of the Foreign and Commonwealth Office, according to Buckingham Palace.

Harry will also visit Malawi and Angola at the request of the Foreign and Commonwealth Office and will also undertake a "working visit" to Botswana.

"The Duke and Duchess are really looking forward to meeting so many of you on the ground and continuing to raise awareness of the high impact work local communities are doing across the commonwealth and beyond," the palace stated on Instagram.