Prince William delivered a speech Wednesday in Jamaica expressing his "profound sorrow" over the history of slavery, as he and his wife, Duchess Kate, have faced protests on their Caribbean tour.

"I want to express my profound sorrow. Slavery was abhorrent. And it should never have happened," William said at a state dinner hosted by Jamaica’s governor general and attended by local dignitaries and senior politicians.

"While the pain runs deep, Jamaica continues to forge its future with determination, courage and fortitude," William said in his remarks. "I strongly agree with my father, the prince of Wales, who said in Barbados last year that the appalling atrocity of slavery forever stains our history.”

"The strength and shared sense of purpose of the Jamaican people, represented in your flag and motto, celebrate an invincible spirit," he continued. "It is this same spirit that spurred on the Windrush generation, who came to the United Kingdom to help rebuild after the Second World War. We are forever grateful for the immense contribution that this generation and their descendants have made to British life, which continues to enrich and improve our society."

'PROFOUND SORROW': Britain's Prince William expresses “profound sorrow” over the “appalling atrocity of slavery” during a speech in Kingston, Jamaica. The country's PM has told the prince that he intends to cut ties with the monarchy. https://t.co/N7qSor1k9C pic.twitter.com/DIQ1aL6qxT

William's speech came just hours after he and Kate met with Jamaican Prime Minister Andrew Holness, who told them that while he was "happy" to welcome them to Jamaica, the country is on its way to becoming a republic.

Jamaica becoming a republic would mean removing Queen Elizabeth, William's grandmother, as its head of state.

Meeting the Prime Minister @AndrewHolnessJM and his wife here in Jamaica this morning 🇯🇲 pic.twitter.com/31HEeP5s9L

As monarch, Queen Elizabeth is the head of the British Commonwealth, representing 54 nations, including Belize, Jamaica and the Bahamas, which William and Kate will visit next.

Another Caribbean country, Barbados, became a republic last year, no longer pledging allegiance to the queen.

William and Kate, the Duke and Duchess of Cambridge, are on a goodwill tour to Belize, Jamaica and the Bahamas to celebrate the queen's Platinum Jubilee, marking her 70 years on the throne.

The Cambridges were forced to cancel one of their first stops in Belize over the weekend when protests led by indigenous people broke out ahead of their arrival.

On Tuesday, the day of William and Kate's arrival in Jamaica, dozens of protesters gathered in Kingston to protest the visit.

A group known as the Advocates Network, which describes itself as a "non-partisan alliance of individuals and organizations advocating for human rights and good governance," also published an open letter protesting the royals' visit, saying that British rule has "perpetuated the greatest human rights tragedy in the history of humankind."

"We already have political independence. We're an independent country," he said. "But there is a symbolism as to who is the head of state that many persons, including inside and outside of government, wish to change."

Prime Minister Holness appointed Marlene Malahoo Forte, the country's former attorney general, to be the minister of constitutional affairs, which took effect in January. Her new role, in part, oversees and advises the government as it seeks to transition to republic status.

Malahoo Forte told the Jamaica Observer in December that Holness gave her instructions for the constitution to be amended for the purposes of becoming a republic.

In addition to the calls for Jamaica to become a republic, activists have also been demanding slavery reparations in many of their demonstrations around William and Kate's visit.

William did not mention reparations in his remarks on slavery Wednesday.

In July, Jamaica announced plans to ask Britain for compensation for the Atlantic slave trade in the former British colony, according to Reuters, noting the total amount could be "billions of pounds."

Morgan told ABC News this week that people in Jamaica are looking for "recognition of the damage" done by slavery.

"The pursuit of reparations is not dependent on the acknowledgment of the oppressor that they have oppressed someone. It is based on the experience of those who are oppressed," he said. "There are many persons in our society who have been fighting really hard for many decades for a recognition of not just the damage that slavery has done to our society, but also a recognition of the need to do repairing of that damage through reparations."

William and Kate have so far not commented publicly on the controversy surrounding their visit. 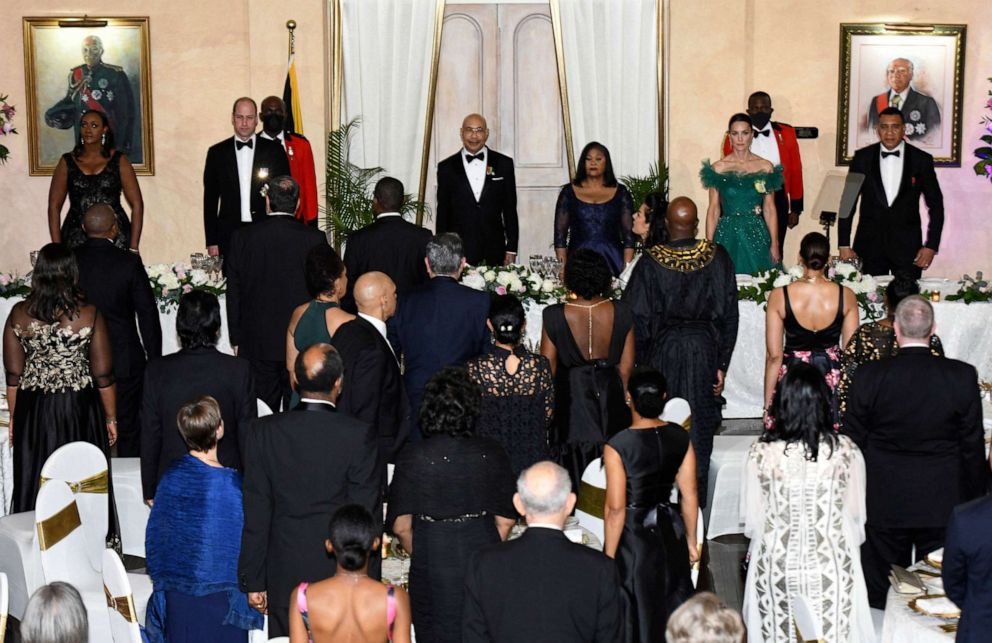 While in Jamaica, the couple played soccer with locals and visited a teacher's college to talk about early childhood development, a particular focus of Kate's work.

Supporting early childhood development is critical to societies right around the world.

Here in Jamaica it is an important priority and it was fantastic to meet the next generation of early years professionals at Shortwood Teacher’s College this morning. pic.twitter.com/woX1FQEwLC

Spent today with doctors, nurses and other staff at Spanish Town Hospital 🏥🇯🇲

They, like healthcare workers the world over, do a vital job in keeping us all safe. pic.twitter.com/Vk5WF4ylsn

They also visited with medical staff at a local hospital.

William and Kate will spend the next two full days in the Bahamas before returning to the U.K. on Sunday.