Prince William and Duchess Kate are facing protests as they continue their week-long tour of the Caribbean to celebrate Queen Elizabeth's Platinum Jubilee.

William and Kate, the Duke and Duchess of Cambridge, were forced to cancel one of their first stops in Belize over the weekend when protests broke out ahead of their arrival.

The protests, led by indigenous people, some holding signs against colonialism, prompted the couple to visit another local cocoa farm instead of the one they originally planned to tour in the foothills of the Maya Mountains.

On Tuesday, the day of William and Kate's arrival in Jamaica, dozens of protesters gathered in Kingston to protest the visit. 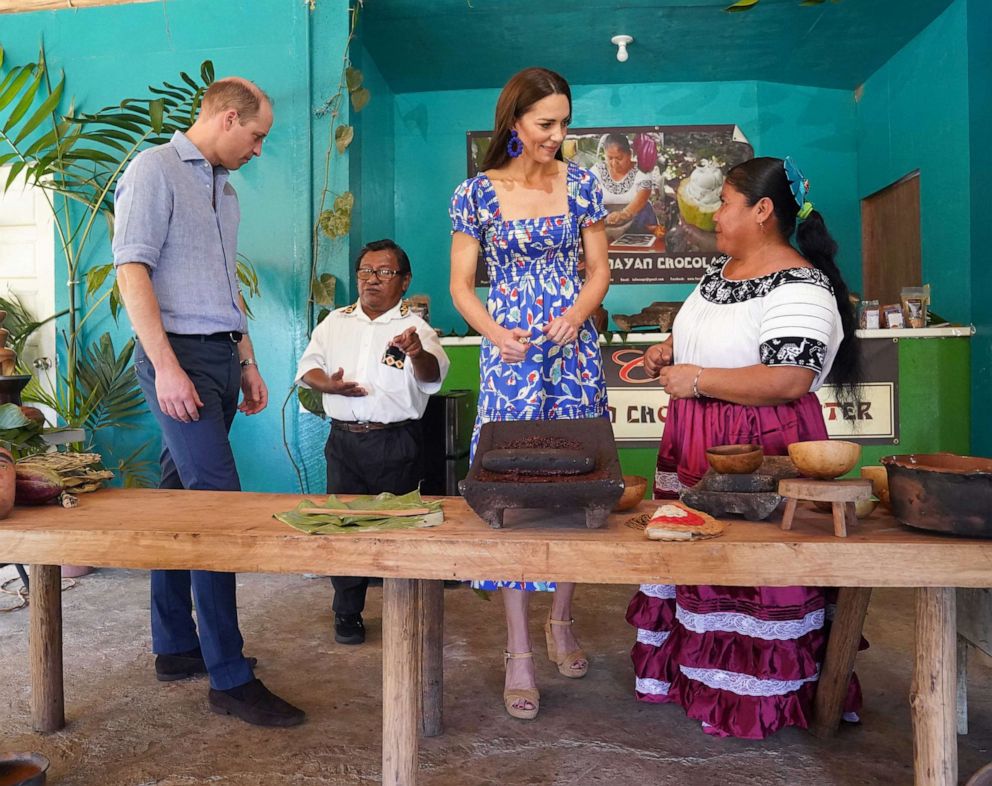 A group known as the Advocates Network, which describes itself as a "non-partisan alliance of individuals and organizations advocating for human rights and good governance," has published an open letter protesting the royals' visit, saying that British rule has "perpetuated the greatest human rights tragedy in the history of humankind."

"During her 70 years on the throne, your grandmother has done nothing to redress and atone for the suffering of our ancestors that took place during her reign and/or during the entire period of British trafficking of Africans, enslavement, indentureship and colonialization," reads the letter, which was signed by 100 Jamaican leaders, activists and scholars.

The group also took to Twitter, publishing in a thread 60 reasons why they say an apology is due to the country, a nod to Jamaica celebrating the 60th anniversary of its independence later this year.

After 60 years of Independence, we have not forgotten and we demand an APOLOGY and REPARATIONS pic.twitter.com/RsMDUMYnJl

Roselea Hamilton, founding Director of the Institute of Law and Economics in Jamaica, and member of the coordinating committee for the Advocates Network, told ABC News that she views the protest against the royal visit as an opportunity to highlight the changing sentiments in Jamaicans and throughout the Caribbean towards the British monarch.

“I think the Black Lives Matter movement sparked something among people of African descent across the world…It's not simply limited to an expression in the United States," said Hamilton. "We think that it's time to come to grips with the implications of these institutions. It's not simply about what the government does or doesn't do, it's about how we as Jamaican people interact with each other, how we minimize violent relationships. It's about how we see ourselves in the future, in a world that demands that we engage on different terms."

“We encouraged and invited Jamaicans to come and take a stand to bring attention to what has happened in the past and to bring attention to the royal visiting couple about what is our feeling today 60 years after the independence of colonial domination," she continued. "We see it as a fitting time to begin a new conversation with the royal family and Britain, as we advocate actively to end formally, the leadership of our country to the British crown as head of state."

Hamilton continued, "As we move into a phase where we become a republic, we need a different conversation about what that means. It cannot simply mean the removal of the head of states. I think many of us are of the view that we have to go beyond. We have to tackle the institutional legacies.”

William and Kate have so far not commented on the controversy.

As monarch, Queen Elizabeth is the head of the British Commonwealth, representing 54 nations, including Belize, Jamaica and the Bahamas, which William and Kate will visit next.

Another Caribbean country, Barbados, became a republic last year, no longer pledging allegiance to the queen.

Queen Elizabeth's oldest son, Prince Charles, the heir to the throne, delivered a speech in Barbados at its independence ceremony, referencing Britain's colonial past during which people were trafficked from Africa to the Caribbean.

"From the darkest days of our past, and the appalling atrocity of slavery, which forever stains our history, the people of this island forged their path with extraordinary fortitude," said Charles. "Emancipation, self-government and independence were your way-points. Freedom, justice and self-determination have been your guides. Your long journey has brought you to this moment, not as your destination, but as a vantage point from which to survey a new horizon."

MORE: Prince William and Kate go on their 1st royal walkabout since pandemic

William and Kate's visit to the Caribbean this week is meant to thank people there for their support of Queen Elizabeth during her 70-year reign, the longest in Britain's history. 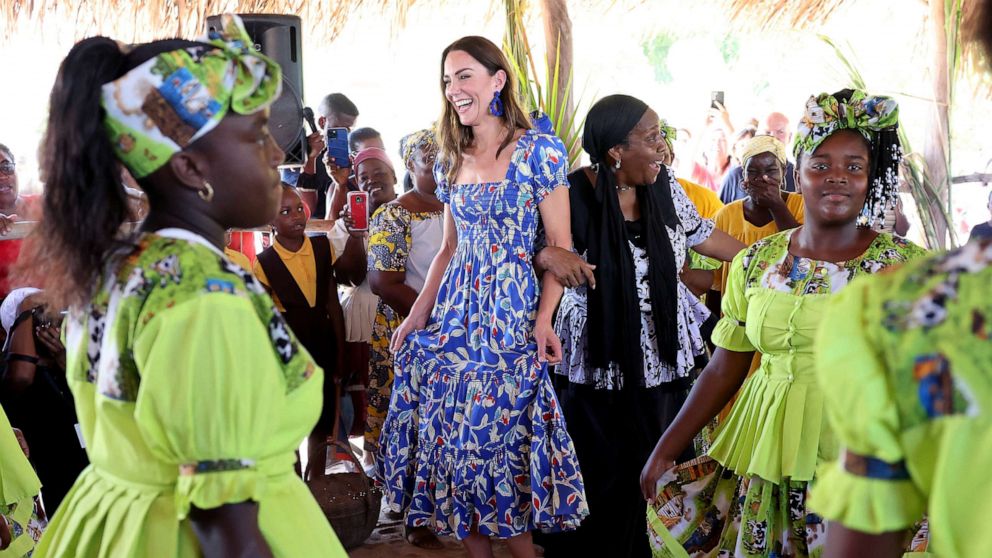 Chris Jackson/Getty Images
Catherine, Duchess of Cambridge dances during a traditional Garifuna festival on the second day of a Platinum Jubilee Royal Tour of the Caribbean, March 20, 2022, in Hopkins, Belize. The Duke and Duchess of Cambridge are visiting Belize, Jamaica and The Bahamas on their week-long tour.

"It’s more to support them and say thanks for all the support they’ve given the queen," said Robert Jobson, an ABC News royal contributor, adding that William and Kate are implementing "soft-power diplomacy" on the tour.

In Belize, in addition to visiting a cocoa farm, William and Kate danced with locals and attended a special reception held by the country's governor general. 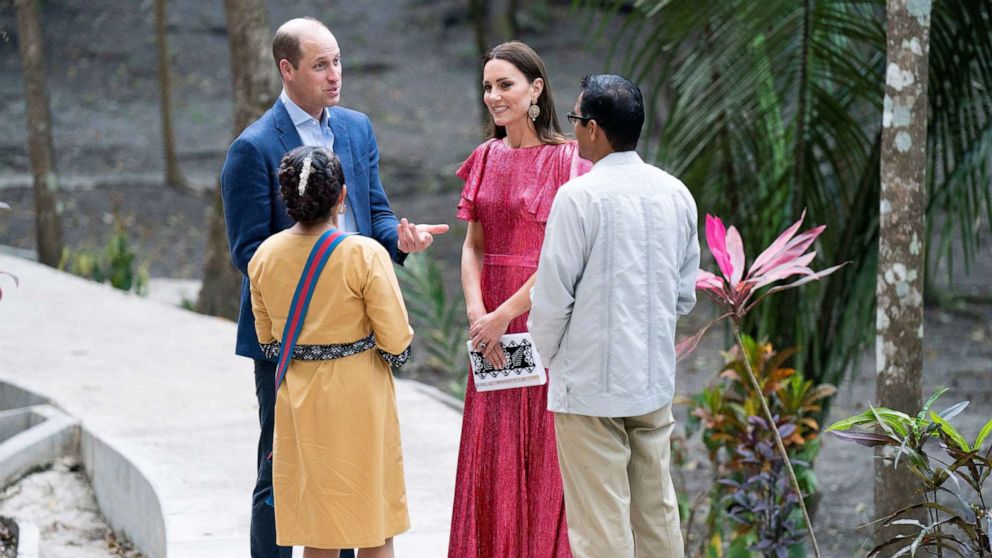 Jane Barlow/Pool via Reuters
Prince William and Catherine, Duchess of Cambridge meet the Governor General of Belize Froyla Tzalam and her husband Daniel Mendez at a special reception in celebration of the Queen's Platinum Jubilee, on the third day of their tour of the Caribbean, at the Mayan ruins at Cahal Pech, Belize, March 21, 2022.

In Jamaica, William and Kate are scheduled to meet with the governor general of Jamaica as well as the prime minister, in addition to other engagements, including visiting a school and hospital.

The Caribbean tour marks William and Kate's first joint foreign tour since the start of the coronavirus pandemic two years ago.