Meghan, the Duchess of Sussex, found out she would take on a history-making role for British Vogue via text message.

In the letter, Meghan writes about putting her own stamp on the magazine's famous September issue, including the quote that inspired her to "be braver" and "go a little deeper" in the issue.

Meghan, who spent seven months working on the issue, chose to feature on the cover a grid of 15 influential women, with one square of the grid embossed in a shiny, mirror-like effect to reflect the reader. The issue is titled "Forces for Change."

The September issue of British Vogue will hit newsstands in the U.K. and will be available for digital download on Friday, Aug. 2. 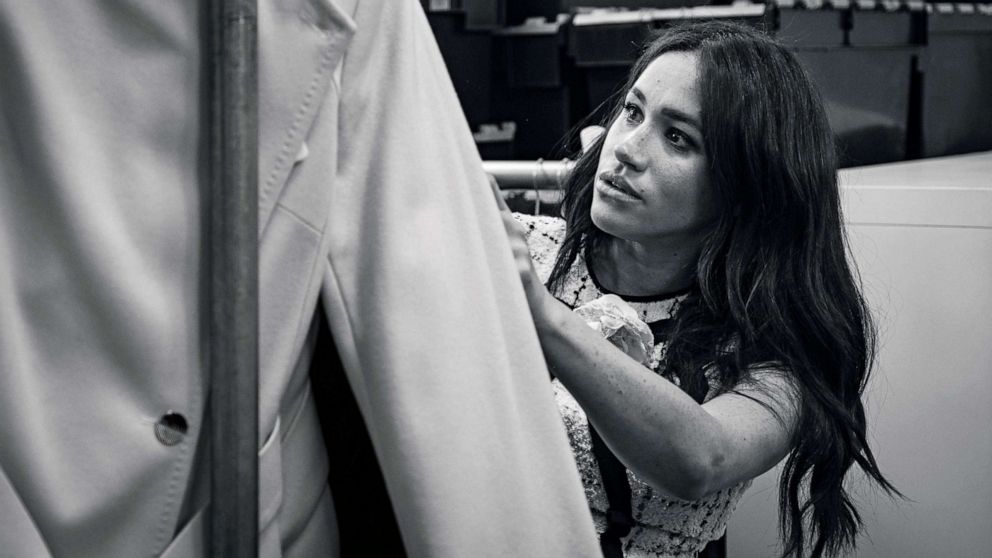 SussexRoyal/PA Wire/Handout via Reuters
Meghan, Duchess of Sussex, patron of Smart Works, is pictured in the workroom of the Smart Works, London office in this undated handout image released by Kensington Palace, July 28, 2019.

It was in early January... on a cold and blustery London day, that I sat down for a cup of tea with British Vogue's editor-in-chief, Edward Enninful. Though we have several mutual friends, our first encounter had been years in the making, the impetus for which was my asking him to support an organisation I strongly believe in called Smart Works (The Smart Set, page 276).

What evolved over the next hour was a promising pow wow of two like-minded thinkers, who have much in common, including our love of writing. Over a steaming cup of mint tea, we teased through how one can shine light in a world filled with seemingly daily darkness. Lofty? Of course. Worth it? Without question.

Within hours of our meeting's end, we were already texting one another – philosophising about how to communicate this shared understanding and the lens through which we see the world, how to pivot from a perspective of frustration to one of optimism.

"Edward… instead of doing the cover, would you be open to me guest editing your September issue?"

(Mind you, I know how important the September issue is for the fashion industry. I realise the reach, and I see the opportunity to be a part of fashion's push for something greater, kinder, more impactful. But I am also a little nervous to be boldly asking the editor-in-chief, whom I've only just met, to take a chance on me.)

I sent the text.

The ellipsis… the "dot dot dot" that inspires the greatest practice of patience in this digital era.

And then it appeared, EE's reply: "Yes! I would love for you to be my guest editor."

Sitting on my sofa at home, two dogs nestled across me, I quietly celebrated when the words appeared on my screen.

Within a week, Edward and I were having our regular meetings – discussing goals, ideas, who would feature on the cover, all while I was undergoing a crash course in editorial lingo ("the well", meaning the inner crux of the book) and acronyms aplenty ("FOB", which I took a stab at being "front of book"). I was trying to blend in, to keep up with the pace of these seasoned professionals, and to learn as much as I could as quickly as possible.

There were facets I felt were of prime importance to include within this issue – elements that would hopefully set the tone, knowing this issue hits stands in August, just as readers gear up for the September fashion shows, where judgement can become clouded and focus skewed toward the superficial. I had read a book many moons ago called The Four-Chambered Heart, by Anaïs Nin, which had a quote that has always resonated with me: 'I must be a mermaid, Rango. I have no fear of depths and a great fear of shallow living.' For this issue, I imagined, why would we swim in the shallow end of the pool when we could go to the deep end? A metaphor for life, as well as for this issue. Let's be braver. Let's go a bit deeper.

That's what Edward and I have aimed to achieve. An issue of both substance and levity. It is, after all, the September issue of British Vogue, and an opportunity to further diversify what that typically represents. Throughout these pages you'll find Commonwealth designers, ethical and sustainable brands, as well as features with designers not about clothes but about heritage, history and heirloom. You'll also find a beauty section that puts its energy towards internal beauty, celebrating the power of breathing and meditation, and a favourite workout that urges you to use your heart as much as your core (How to Feel Good, page 224).

As you flip the pages, you'll find familiar faces and names that I hope you get to know a bit better, a bit more deeply, even. And there are less familiar names that you may want to know, such as the women of Luminary Bakery and Tessa Clarke, co-founder of food-sharing app Olio, whom I metwith discreetly last year. There are inspiring reads from Brené Brown and Jameela Jamil. You'll also find a very special piece with Dr Jane Goodall, interviewed by my husband, and a candid and,heartfelt conversation between myself and the extraordinary Michelle Obama.

But more than anything, this issue is about the power of the collective. In identifying our personal strengths, it is anchored in the knowledge that we are even stronger together.

You will find that spirit of inclusivity on the cover: diverse portraiture of women of varying age, colour, creed, nationality and life experience, and of unquestionable inspiration. Some, I've had the pleasure of meeting and enlisted personally for this issue, others I've admired from afar for their commitment,to a cause, their fearlessness in breaking barriers, or what,they represent simply by being. These are our forces for,change. And among all of these strong women on the cover,,a mirror – a space for you, the reader, to see yourself. Because you, too, are part of this collective.

There is one caveat for you to remember: this is a magazine. It's still a business, after all. I share that to manage expectations for you: there will be advertising sections that are requisite for every issue, so while I feel confident that you'll feel my thumbprint on most pages, please know that there are elements that just come with the territory. The overall sentiment I hope you'll find, however, will be one of positivity, kindness, humour and inclusivity.

I was about five months pregnant when this process began, and by the time you hold this issue in your hands, my husband and I will be holding our three-month-old baby boy in ours. It's a very special time for me personally, on so many levels; working with Edward and his team, both during my pregnancy and my maternity leave, has played no small part in that joy – it has been a privilege to be welcomed and supported by this amazing team. To Edward, thank you for entrusting me with this. I am deeply honoured. To the women who have taken my aspirations for this issue and brought them to life by being a part of this time capsule, both on the cover and in-book, I am so grateful; you are inspirations to me and I'm humbled by your support.

HRH The Duchess of Sussex