It seems so simple: the story of a carpenter who carves a boy out of wood only to see his puppet son come to life with a nose that grows when he lies. The 1883 novel by Carlo Collodi has inspired dozens of film and TV shows, none finer than Disney’s animated 1940 classic.

Until now. The Oscar-winning Mexican director Guillermo Del Toro ("The Shape of Water") has filtered Collodi's vision through his own dark and dazzling sensibilities, so much so that this stop-motion masterpiece is titled "Guillermo del Toro’s Pinocchio."

An ego trip? Far from it. Now in theaters and on its way to a Dec. 9 Netflix debut, this 15-year passion project is the work of a true film artist who uses an intricate animation technique in which a camera is repeatedly stopped and started, frame-by-frame, in order to give inanimate objects and figures the impression of movement. 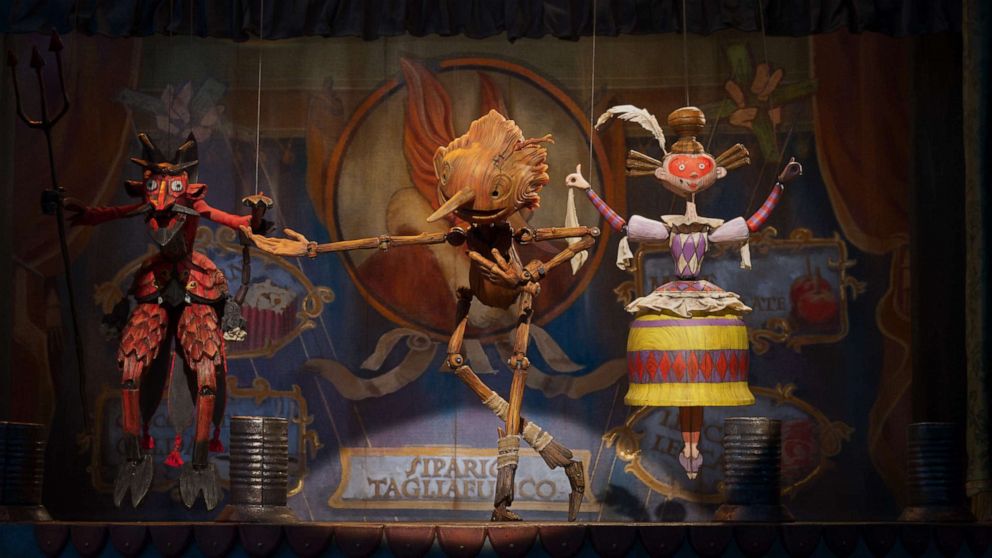 I’d rank Del Toro’s “Pinocchio” alongside the 1933 "King Kong," Tim Burton's "The Nightmare Before Christmas" and Wes Anderson’s "Fantastic Mr. Fox" in terms of the visual and emotional miracles that can be accomplished through stop motion.

Is del Toro’s "Pinocchio" too scary for kids? For younger children, probably. Monsters lurking in shadows are del Toro’s signature. As is the line between beauty and the grotesque.

MORE: Review: 'Hocus Pocus 2' will put a funny-scary spell on you

Set in WW2-era Italy with the rise of fascism and Mussolini, as in del Toro’s "Pan’s Labyrinth" and "The Devil’s Backbone," the film begins with carpenter Geppetto, beautifully voiced by David Bradley, in the midst of an intense personal crisis.

His only son Carlo, left for safety in a mountain church, is killed in an air raid, leaving Geppetto weeping by Carlo's grave and drowning his sorrows in the bottle. Later, like Dr. Frankenstein, he carves a new son, Pinocchio, out of wood that looks primitive and unfinished.

Del Toro and co-director Mark Gustafson, collaborating with over 40 animators, display a next-level craftsmanship that is jaw dropping. From scenes of Pinocchio (Gregory Mann) running amok in Geppetto's workshop to running away to join a circus run by evil Count Volpe (Christoph Waltz, oozing charm and menace), the film pulsates with thrilling life. 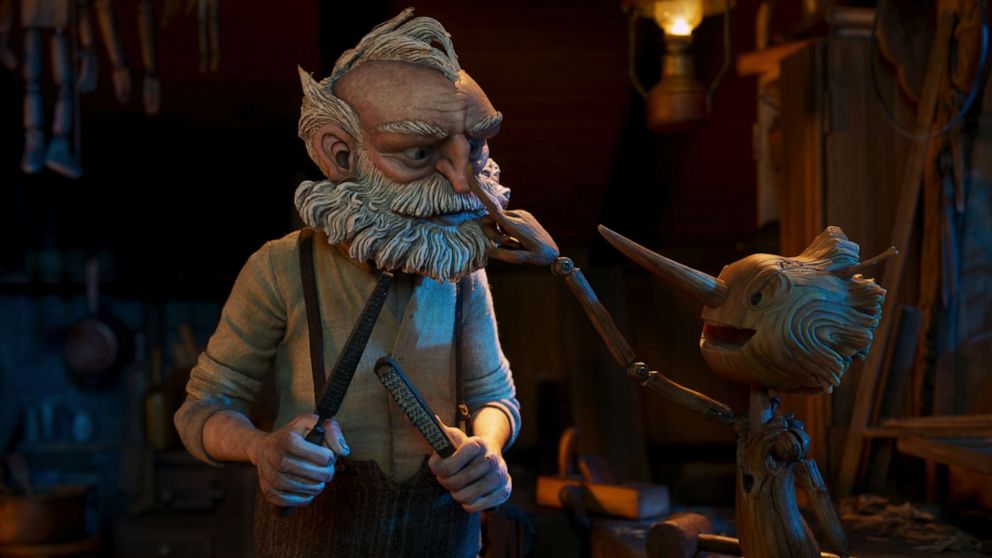 Among the excellent voice cast, cheers to Ewan McGregor as the witty philosopher Sebastian J. Cricket, Tilda Swinton as a wood sprite with eyeballs all over her body except where eyeballs should be who brings Pinocchio to life, and the great Cate Blanchett as, of all things, an obstreperous monkey named Spazzatura who works for Volpe.

Zigging from the carnage of war to visions of the afterlife and scenes of Pinocchio and Geppetto reuniting inside the belly of a whale, the film is a feast for the eyes and ears. Though the new songs, to which del Toro contributed, are mostly bland, the exception is the lovely "Ciao Papa."

Still, what you’ll remember about this imperfect father and his imperfect son is a bond that has never been explored more movingly than it is in stop motion against painted backdrops. You’ve never seen a Pinocchio like this. One, with laughter giving way to buckets of tears.

Though "Turning Red" and "Marcel the Shell with Shoes On" offer much to cherish, this year’s Oscar for best animated feature belongs right here.