Say what you will about Minions -- those tiny yellow, goggle-wearing buggers in blue overalls who’ve been around since the dawn of time talking gibberish and looking for an evil boss to guide them -- they are icons of mischief.

"Minions: The Rise of Gru" (now in theaters) is their fifth feature and if you’re in search of family fun to kick off Fourth of July festivities, this is your baby.

This prequel to 2010’s "Despicable Me" serves as the origin story for Gru, voiced as ever by the pricelessly funny Steve Carell.

MORE: Review: 'Marcel the Shell' is funny and touching with surprises you won’t see coming

Gru is the hunchback villain with the Eastern European accent who once plotted to steal the moon. But in the 1970s, Gru is just an 11-year-old suburban kid in shorts (still voiced by Carell but at a hilarious higher pitch) out to prove he’s bad to the bone.

And he needs the Minions, including Kevin, Bob and one-eyed Stuart, to convince his idols, the Vicious 6, that he deserves to join their club, now that MIA Vicious founder Wild Knuckles (Alan Arkin, grumpiness personified) has created a vacancy. 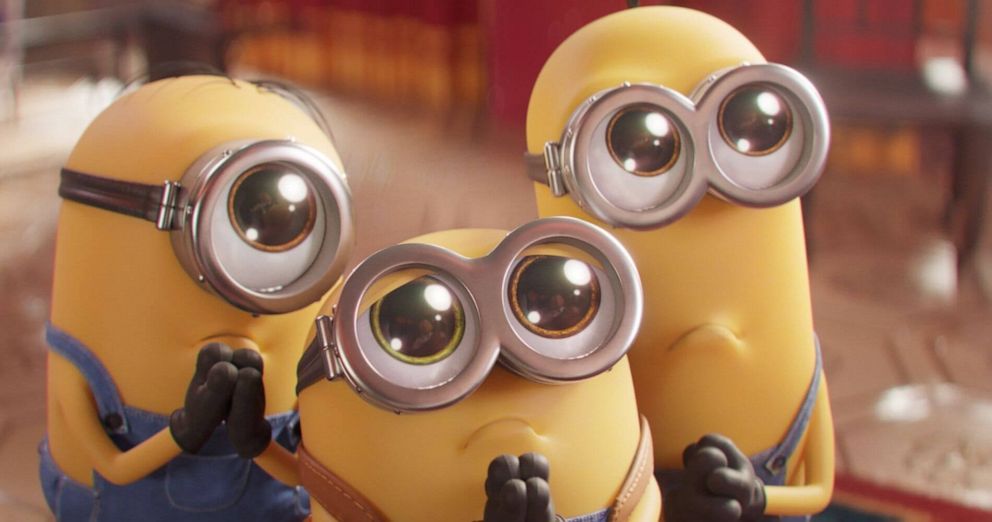 Universal Pictures
A still from "Minions: The Rise of Gru," 2022.

New leader, Belle Bottom (Taraji P. Henson), is not impressed. "Evil is for adults, not for tubby little punks," she tells him. That’s when Gru, ever ingenious, steals right out from under her a magic amulet that can control the world.

And we’re off with Gru and his trusty Minions fighting to outwit the Six, including Jean-Claude Van Damme as a baddy with a crab claw for a hand who’s called Jean-Clawed. These are the jokes, folks, and the movie is loaded with groaners that stretch bonkers to the breaking point.

No worries. "Minions: The Rise of Gru" is nothing if not a chance for the kid in all of us to shake our sillies out without shame or apology.

And cheers to French animator and Minions creator Pierre Coffin who does all the sublimely ridiculous voices, including Otto, a not very bright Minion newbie who ends up trading the precious amulet for a pet rock.

Feminists might wonder why there are no female Minions. Said Coffin: "Seeing how dumb and stupid they often are, I just couldn’t imagine Minions being girls." Good save.

The plot, which would have to go some to be described as thin, is merely an excuse to get these characters on the move. When Gru is kidnapped by Wild Knuckles, it’s the Minions to the rescue with help from a biker (RZA) and a martial arts expert (Michelle Yeoh). 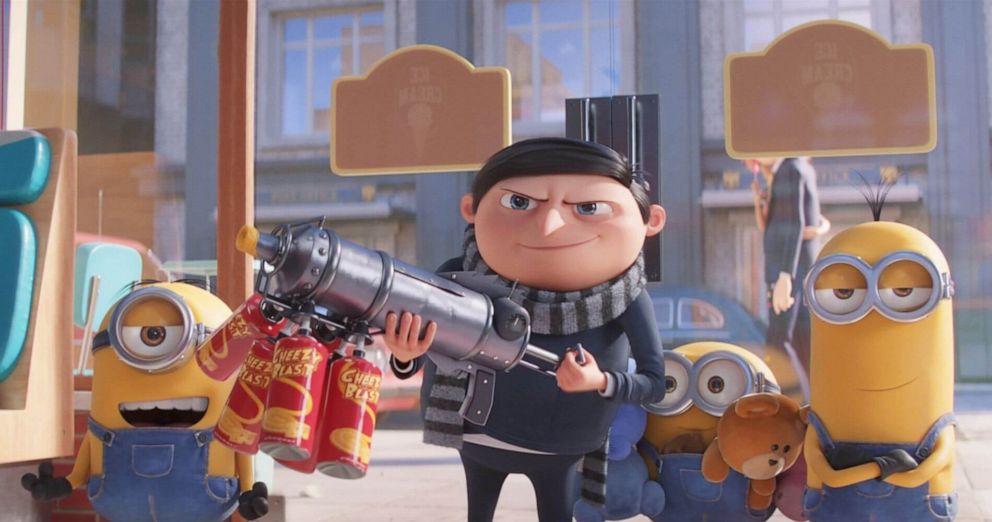 Universal Pictures
A still from "Minions: The Rise of Gru," 2022.

Still, for all the big-name celeb cameos, "Minions: The Rise of Gru" depends on the inspired lunacy of these cartoonish creatures who will stop at nothing, including farting and flashing their butts, for a laugh.

MORE: Review: Austin Butler does 'Elvis' proud with the grit and grace of his performance

Director Kyle Balda creates a traffic jam of chases and collisions with the Vicious Six morphing into giant animals, including dragons, tigers and monkeys. It’s all too much and too ditzy. But would you want it any other way?

Here’s the movie that tells you how Gru and the Minions became the life of a party you never want to end.