This week’s Oscar nominations ignited real awards fire under “Another Round,” which you can now stream on Hulu to find out why this spellbinding Danish import is the front-runner for best international feature. One reason is Thomas Vinterberg, who snagged a surprise but deserving nomination for best director. 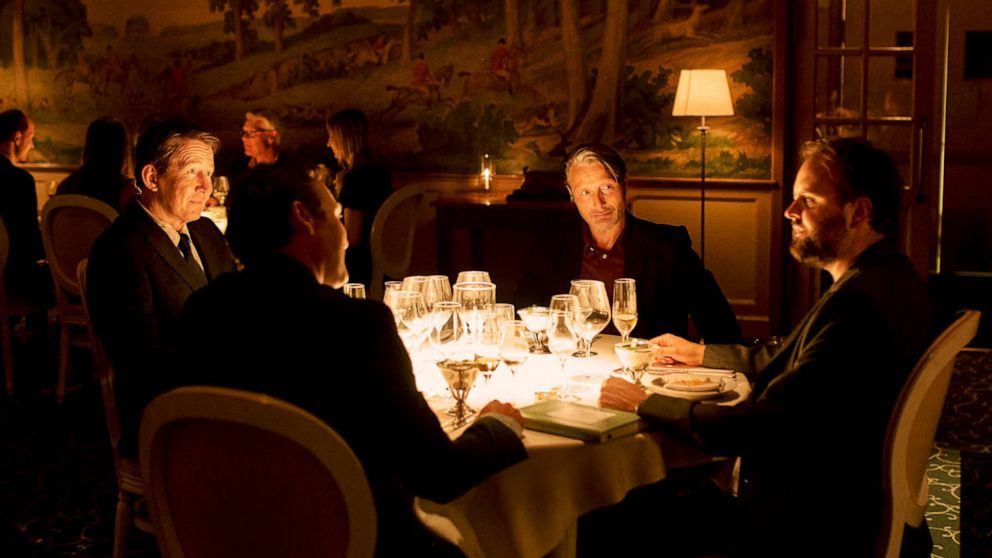 Samuel Goldwyn Films via Getty Images
A scene from the movie "Another Round" is shown.

“Another Round” revels in Vinterberg’s wicked mischief and dramatic force. Starring the mesmerizing “Casino Royale” Bond villain and “Hannibal” TV favorite Mads Mikkelsen, the film is a comedy of shocking gravity about, among other things, day drinking. Mikkelsen plays Martin, a dancer turned history teacher at a Copenhagen high school who is having a mid-life crisis that his alienated wife, Trine (Maria Bonnevie), and their two children can’t stop.

That’s when Martin hears a theory that humans are born with a .05 percent alcohol deficiency and that maybe sustaining a controlled buzz could help kickstart a stalled life. Martin decides to start an experiment with his teacher buddies, weary Nikolaj (Magnus Millang), wound-up Peter (Lars Ranthe), and divorce-wounded Tommy (Thomas Bo Larsen), to test the theory.

For a while the results are bracing and hilarious. Mikkelsen uses his trademarked hooded eyes to show how Martin, once resigned to sleepwalking through life, emerges as a stimulating mentor to his students and a re-committed husband and father. Mikkelsen gives his best performance yet as a man trying to bust through the barricades of his own melancholy.

The same goes for his friends. But sneaking a few swigs of vodka between classes soon escalates into excess, with disastrous results for Tommy, the gym teacher whose secret stash is discovered at school. By the time Martin starts staggering into walls you might worry that  “Another Round” will degenerate into a cautionary fable about demon alcohol.

Samuel Goldwyn Films via Getty Images
A scene from the movie "Another Round" is shown.

That it doesn’t is a tribute to Vinterberg. One if the founders of Dogme 95, a movement that decried budget-busting special epics and prettification in favor of a stripped down version of life as it is, Vinterberg practiced what he preached in his 1998 landmark film, “The Celebration.” His dogma grew less rigid over the years, but you can still see feel his raw aesthetic in “Another Round” as Martin realizes that countless rounds of drinks can’t dull the pain inside.

Vinterberg’s own pain informs “Another Round.” The director was four days into shooting when his daughter Ida, 19, who was due to act in the movie died in a car accident. Vinterberg has said that finishing the movie “kept me away from insanity” and that he hoped the laughs and tears on screen would “honor her memory.”

That knowledge adds power and poignance to the unforgettable ending of “Another Round,” in which Martin attends a champagne party for his graduating students on the Copenhagen waterfront and dances again for the first time since his youth. Mikkelsen, who once trained in jazz ballet, begins slowly until Martin is moving, leaping, spinning, doing handstands and bouncing off cars and statuary in a balletic expression of exultant joy. It’s a great moment of cinema and a touching and vital way for Vinterberg to celebrate his daughter through his art. Bravo to all concerned for one of the year’s best films and a sure bet for an Oscar.