By Brittany Berkowitz, Will Linendoll

Video by Will Linendoll, Brittany Berkowitz, Olivia Smith
Share —
Sign up for our newsletters to get GMA delivered to your inbox every morning!

Sophia Bush has come a long way since her Brooke Davis days.

The 37-year-old's claim to fame may have begun on the teen drama "One Tree Hill," but Bush has gone from actress to activist.

"It reminds me of how much good we do when we come together and when we advocate for each other," Bush told "Good Morning America." "I think that empowerment comes from knowledge, and if there is an issue near and dear to your heart and you want to step in and help, do that."

(MORE: Sophia Bush raises awareness to help end period poverty for young women in the US)

From being involved with philanthropies that work to end period poverty to marching on Washington to fight for women's reproductive rights, Bush is a true advocate. She credits much of her success to the strong women she surrounds herself with.

"There's nothing more important in a woman's life than a sisterhood that is supportive and safe, and really ride or die," said Bush.

Bush opened up to "GMA" about her on-screen sisterhood from "John Tucker Must Die" and "One Tree Hill," where she served up advice to her younger self.

Most of us took baby photos with Barney or Mickey Mouse. Bush was lucky enough to get a photo op with Sophia Loren.

"This is a picture my father took and he photographed Sophia Loren for many, many years," Bush said, sharing the snap. "I'm actually named after her."

Loren, who just turned 85, is one of Bush's icons and the value of the photo is immeasurable to her.

"The advice that I would give to the little girl in this photo, who is clearly experiencing such a sense of wonder in the world, is to never lose that," said Bush.

You have the right to take up space

The most amazing thing about this photo is that Bush still has the dress she's wearing in it.

"It's so funny to look at now, because Ruth Bader Ginsburg is my hero, and I realized that, as a little girl, I was wearing an RBG collar," said Bush.

Bush also talked about another woman she loves who's in this photo: her mother.

"My mom taught me a lot about being a woman and making sure that I have the right to take up space," said Bush. "And that I have my own identity as an anchor in my life and I really am grateful to her for that."

Make time for yourself

Bush played popular cheerleader Brooke Davis on the TV drama "One Tree Hill" from 2003 to 2012.

"The first season of 'One Tree Hill' was such a wild experience," Bush recalled. "We were jumping into the careers that we wanted and also being thrust in the public eye."

Bush said she felt lucky to have her castmates, such as Hilarie Burton, who played Peyton Sawyer, during the show's nine-year run.

"'One Tree Hill' changed my life and all of our lives in so many ways," said Bush. "It was this incredible mixture of adventure, so it was so many things at once."

Bush was 21 years old when she began the series and has learned a lot since then.

"I would remind myself to not get overwhelmed by the opinions of strangers," Bush told "GMA." "I would make some really clear time for me in the world of working on a show, which can be very hard."

Hold on to your community of women

Bush must be dying over this throwback photo!

"I got asked earlier what my first impressions were when I met all the girls and the word that came to mind was just, 'badass,' exclaimed Bush.

Bush starred in the rom-com about a group of high school girls trying to destroy their ex-boyfriend's life alongside Brittany Snow, Arielle Kebbel and Ashanti.

"I was such a huge Ashanti fan! Hello, who was not?" laughed Bush.

While the film was fun for Bush to make, it also enforced the importance of female friendships.

Bush's on-screen friendship with Snow was taken to the next level when her character had to teach Snow's how to kiss.

"We were just laughing hysterically, the idea that that was sort of shocking was funny to us," Bush recalled. "Now, looking back, and we think about how much more inclusive and open culture has become, but we were very proud to fly that flag."

Do the next right thing 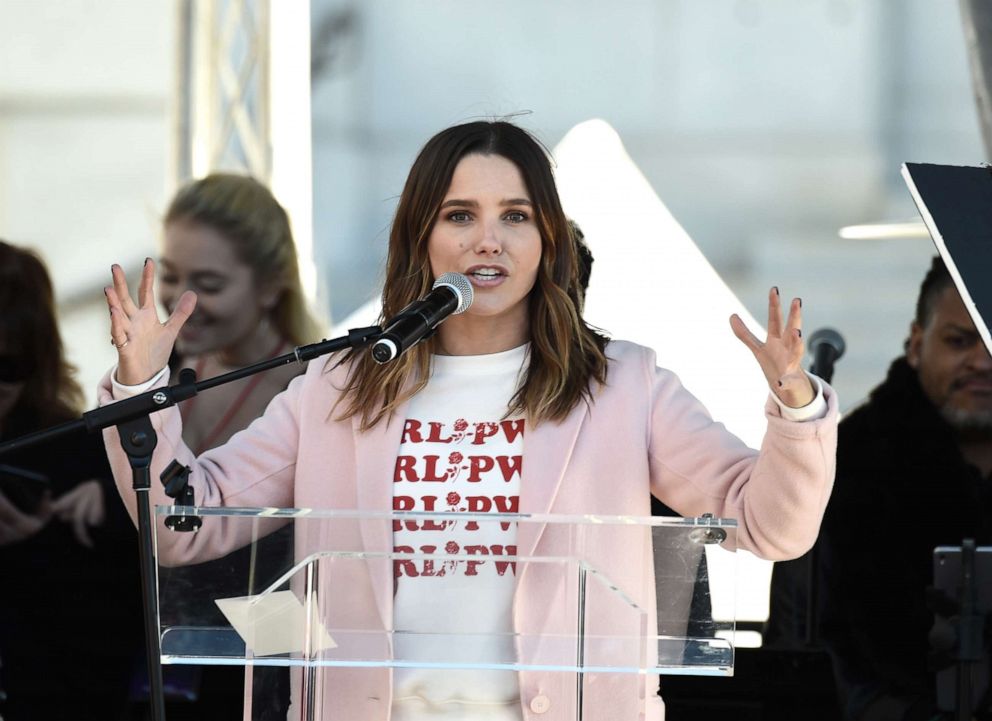 Bush took part in both the 2017 Women's March on Washington and the 2018 Women's March in Los Angeles. Having grown up in L.A., Bush said it was an incredible experience to rally in her hometown.

From gun control to voter advocacy, Bush is using her platform to speak up for what she believes in.