Sunisa Lee won gold in the gymnastics all-around at the Tokyo Olympics, making her the fifth American female gymnast in a row to win the Olympic all-around title.

The Minnesota-based Lee, 18, went into the all-arounds with a medal already in her pocket, having been part of the U.S. team that won silver Tuesday. 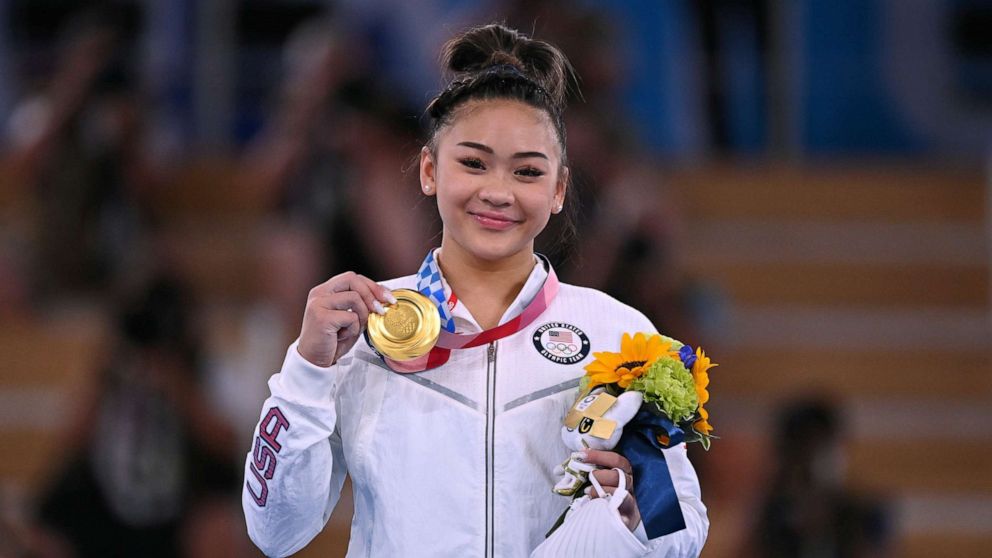 Dylan Martinez/Reuters
Gold medallist Sunisa Lee of the United States poses on the podium after winning the Women's Individual All-Around, July 29, 2021, in Tokyo.

Lee and Carey's teammates, including Simone Biles, who withdrew from the individual competition to focus on her mental health, were seen Thursday in the stands in Tokyo cheering on Lee and Carey.

1. Lee made history as a Hmong-American:

Lee is the first Hmong-American to compete for Team USA and the first to win a gold medal at the Olympics.

One of six children, Lee was born and raised in Minnesota, a state that has one of the largest Hmong populations in the nation. 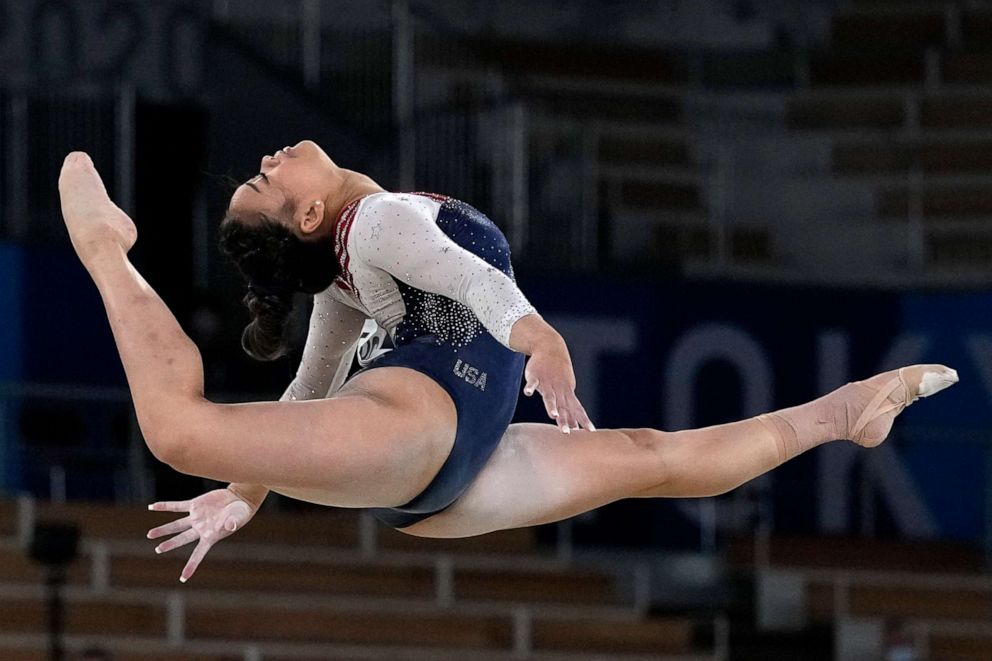 Gregory Bull/AP
Sunisa Lee, of the United States, performs on the floor during the artistic gymnastics women's all-around final at the Tokly Olympics, July 29, 2021.

The Hmong people lived in southwestern China for thousands of years and then migrated to countries including Laos and Thailand. During the Vietnam War, the Hmong living in Laos partnered with American forces, which led to them being retaliated against once the United States left in the early 1970s.

Many families eventually resettled in the U.S., including Lee's father, John, who moved to Minnesota from Laos at the age of 7 with his 10 siblings and their parents, according to ESPN.

Lee told People magazine earlier this year that she knows making gymnastics history as a Hmong-American "means a lot to the Hmong community ... and to just be an inspiration to other Hmong people [means] a lot to me too."

2. Lee is the youngest competitor on the US gymnastics team:

Lee is the youngest person on this year's team at 18 years old, but is no stranger to high-stakes competition. A first-time Olympian, Lee is the national bar champion and has taken gold for beam at several national championships and at the 2019 World Championships.

Due to COVID-19 restrictions, Lee's family was not able to travel to Tokyo to watch her in person.

Instead, the family gathered in their home state of Minnesota to watch Lee win the gold.

The Olympic dream is often shared, as seen here back in Minnesota! #StrongerTogether https://t.co/9ulVoZRMVB

Among the family members celebrating was Lee's dad, who was paralyzed from the chest down after falling from a ladder while helping a neighbor cut a tree branch in 2019. The accident took place just days before Lee competed at the U.S. National Gymnastics Championships.

It was Lee's dad who helped her get her start in gymnastics by building a wooden balance beam that still sits in the family's backyard. 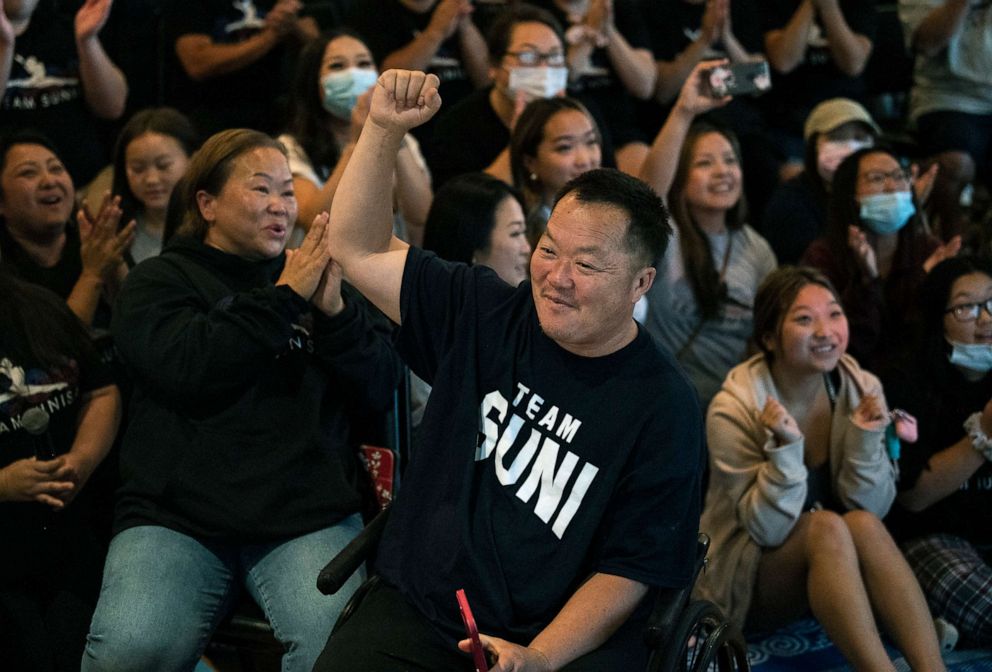 Stephen Maturen/Getty Images
John Lee, father of Sunisa Lee, celebrates after she won gold in the Women's All-Around gymnastics final on day six of the Tokyo Olympic Games at a watch party, July 29, 2021, in Oakdale, Minn.

"[He tells me] to go out there and do my best and to just do what I do," Lee told People about her dad's pep talks.

4. Lee survived a broken foot, family tragedy before the Olympics:

When the Olympics were postponed one year due to the coronavirus pandemic, Lee considered quitting the sport. But, with her family's encouragement, continued her training, according to ESPN.

Then in June 2020 she broke her foot, and later over the summer, her aunt and uncle both contracted COVID-19 and died. 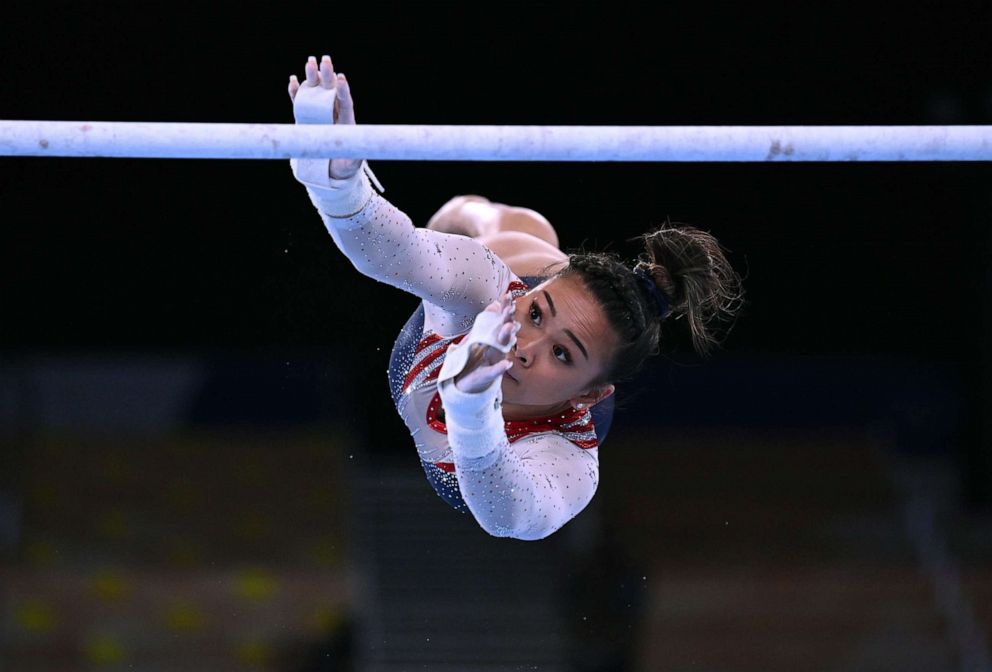 Dylan Martinez/Reuters
Sunisa Lee of the United States performs on the uneven bars, July 29, 2021, during the Women's Individual All-Around, at the Tokyo Olympics.

"It's been a tough year, but I'm super proud of myself," Lee told ESPN earlier this month. "After COVID and quarantine, I was unmotivated because we had so much time off and I felt I wasn't good enough anymore. But now I've been a lot better mentally and you can see it in my gymnastics."

5. Lee's next stop post-Olympics is college:

After the Olympics, Lee plans to attend Auburn University in Alabama.