When Kitana Garrett gave birth to her first child unexpectedly at home at 25 weeks pregnant, two first responders who arrived at Garrett's home to help her were credited with saving the baby's life.

"All I can say is thank you a million times because they are a blessing God has sent," Garrett, 23, told "Good Morning America." "They didn't give up, so I feel like they will continue do that later on in life [for Za'myla]."

Garrett, of Columbia, Tennessee., said she was home alone while her partner was at work on Oct. 5, 2021, when she suddenly went into labor and gave birth on her own.

After Garrett called 911, Hill, a 10-year veteran with the local fire department, Columbia Fire & Rescue, was one of the first to arrive on the scene. He said he and his colleagues were "expecting the worst" given that Garrett had given birth at home so early, but they arrived to see that Za'myla was alive and breathing.

"[A fellow firefighter] looked at us and said, ‘She’s breathing,'" recalled Hill. "Everything had to kick in gear at that point."

While other first responders tended to Garrett, Hill led the charge in taking care of Za'myla. He said he had the heat turned up as high as possible in the house to keep Za'myla warm and then began doing CPR using a bag valve mask to keep her breathing.

Within minutes, Roan, a paramedic with Maury Regional Emergency Medical Services (EMS), arrived in an ambulance and Hill rushed in with Za'myla. 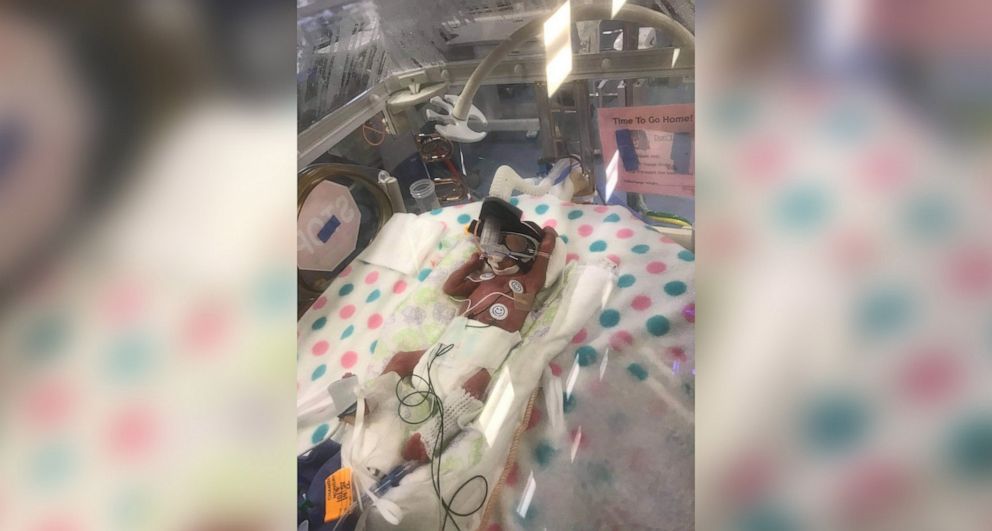 Kitana Garrett
Za'myla Garrett was born premature, at 25 weeks, and weighed just over one pound at birth.

"We put her on the monitor and realized that she had a fighting chance," Roan said. "And as we did CPR and sunctioned her, I felt her move her shoulder, and that's when we were all just amazed by her. We all had a little hope and we got excited."

Za'myla weighed just over one pound at birth and was described by both Roan and Hill as the smallest baby they had ever delivered.

"My whole entire hand probably fit from the top of her head down to her waist," said Hill. "She was no bigger than maybe a potato, is what it seemed like."

"We were talking to her the whole way to the hospital, saying, ‘Fight little girl,'" Roan said.

MORE: Nurse becomes baby's godmother after more than 10 months in the NICU

When they arrived at the hospital, Roan and Hill said they stayed by Za'myla's side until they knew she was stable.

The only time Roan left the newborn's side was to meet the incoming ambulance that carried Garrett, so that she could tell the new mom that her baby was still alive.

"I went outside and waited ... and I jumped in the truck when she got there because I wanted her to know," Roan said. "I was pretty excited to tell her."

Garrett said she was still in shock after going into labor and had no idea about the fate of her daughter until Roan arrived, remembering, "Jamie showed me pictures of her and told me that she was okay, that they did everything and she was a fighter."

Kitana Garrett
Za'myla Garrett was born premature, at 25 weeks, and weighed just over one pound at birth.

Garrett was discharged from the hospital a few days after giving birth, but Za'myla had to be transferred to the neonatal intensive care unit at Monroe Carell Jr. Children’s Hospital at Vanderbilt, where she spent the first four months of her life.

While Za'myla was being treated in the NICU, Roan and Hill said they closely tracked the baby's progress through Garrett's Facebook posts. Roan said she first saw people post on Facebook about praying for Za'myla, and through those posts found Garrett's page. 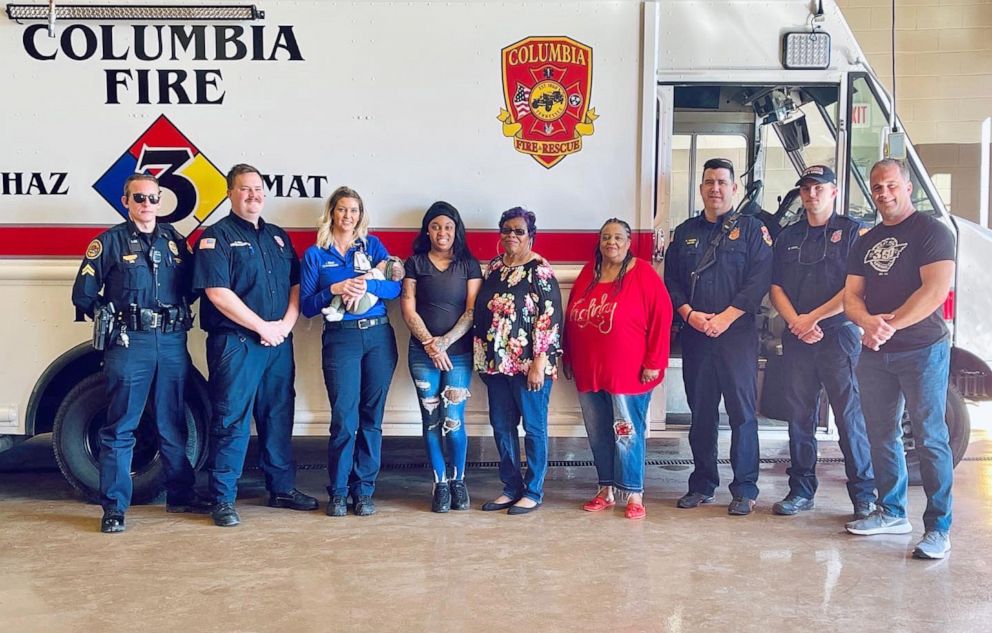 "We Facebook-stalked her a lot, looking at all of her pictures," said Roan, with a laugh. "And we couldn't help ourselves but to message her and and ask how it was going and just make sure that she knew she had continued support from her community."

When Roan and Hill learned that Garrett and her partner were driving around two hours each day to visit Za'myla in the NICU, they collected gas cards to help the couple pay for gas. And realizing that because Garrett gave birth so early she likely did not have all her baby supplies ready, they collected donations and filled two ambulances with supplies for Za'myla. 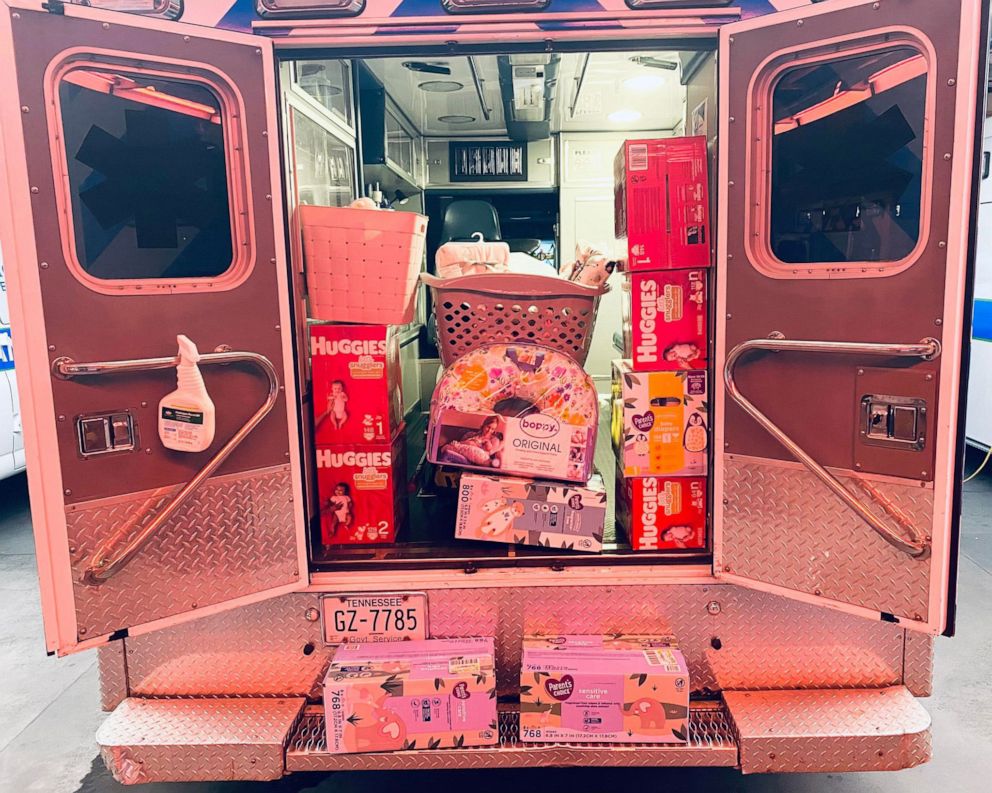 The local fire department also joined in to support the family, donating a car seat and installing it in Garrett's car.

In the NICU, Za'myla continued to grow strong and faced few complications beyond the fact that she was born so premature, according to Dr. Leon D. Hatch, a pediatric neonatologist and medical director of the NICU at Monroe Carell Jr. Children’s Hospital at Vanderbilt, told "GMA." 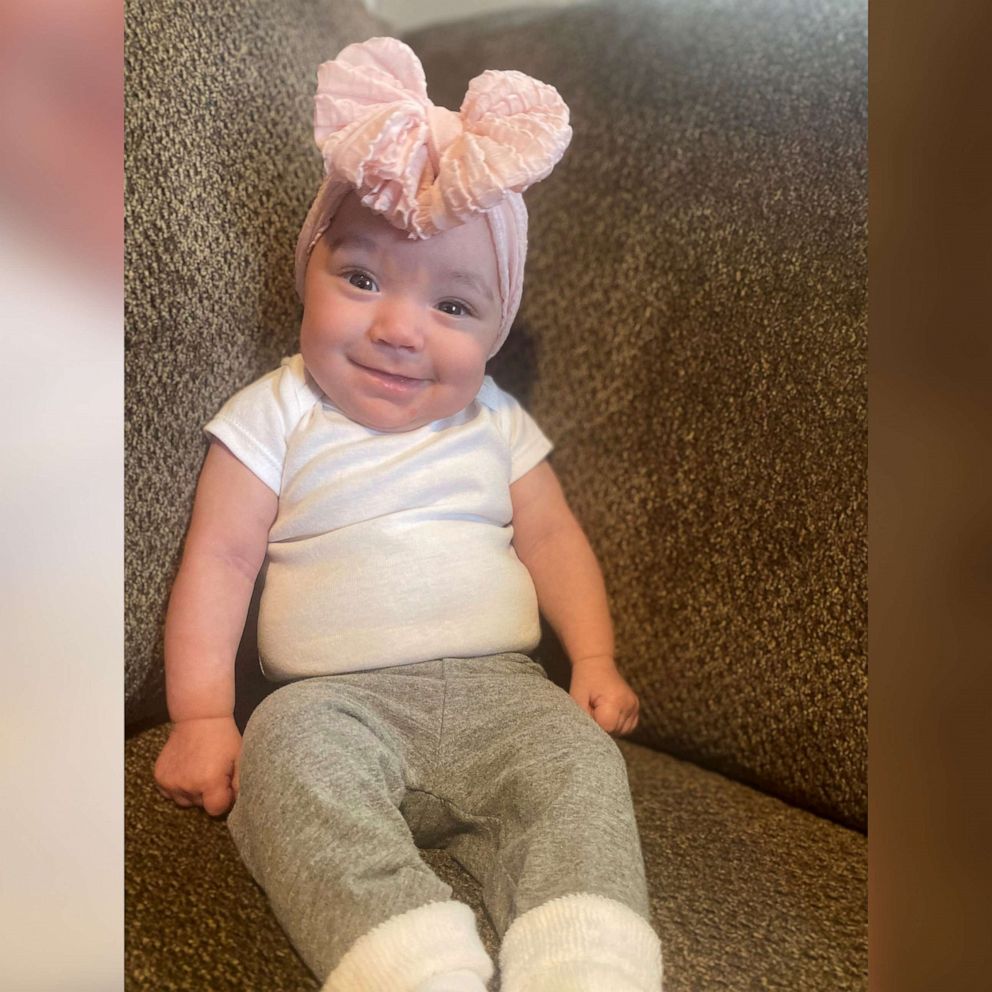 Kitana Garrett
Za'myla Garrett was born premature on Oct. 5, 2021, and spent four months in the NICU.

"She needed weeks of respiratory support and nutritional support and then she spent a couple of months in the NICU learning how to eat," Hatch said. "With the exception of her birth and her first days of life, she had a pretty typical NICU stay with babies born at 25 weeks."

Hatch said that even in an academic medical center like Vanderbilt, a delivery at 25 weeks is a complicated and risky endeavor. He credited Roan and Hill and their team of first responders with saving Za'myla's life.

"Of her entire NICU stay, those first 20 to 30 minutes when the first responders were taking care of her was probably the most dangerous time in maybe her entire life," Hatch said. "The fact that she got through that and they got her to the hospital alive, and supported to where another hospital could take over, that’s a real testament to how well they did in this. It certainly saved her life." 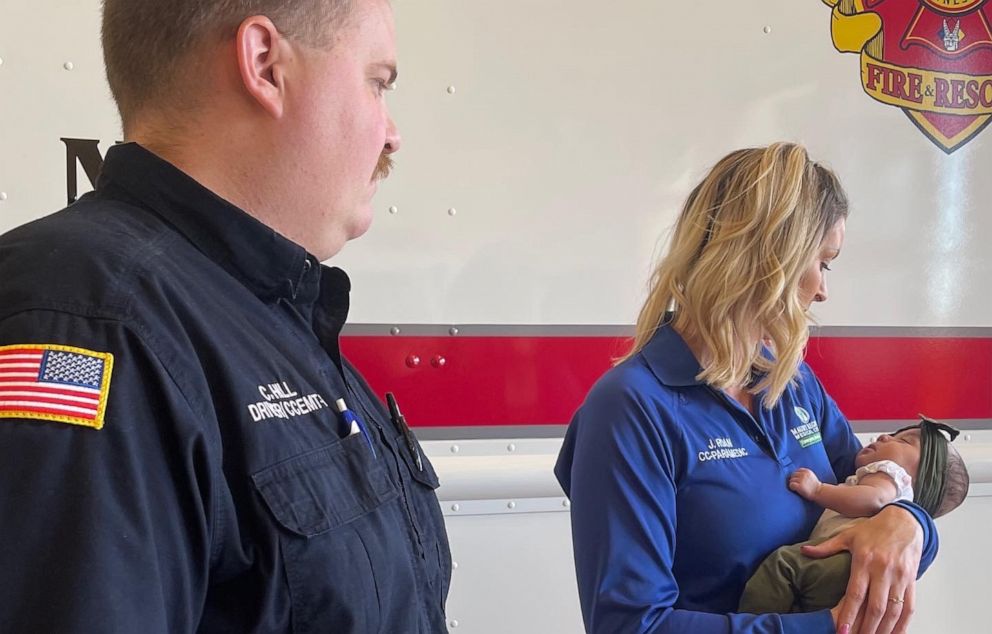 When Za'myla was discharged from the NICU in late January, one of the first places Garrett brought her to was Columbia Fire & Rescue for an emotional reunion. In the weeks since, the mother and daughter have visited frequently, according to Roan and Hill.

"That day, we didn’t even know if she would make it to the hospital, and every time I see her, I can’t believe it," Hill said of Za'myla, who now weighs nearly 10 pounds. "That little, tiny, tiny potato has grown up. She's a fighter and has turned into a strong little girl."

MORE: Baby comes home after 136 days in the NICU

During one visit in March, Garrett asked Roan and Hill to be her daughter's godparents, an honor they both said they were touched to have. 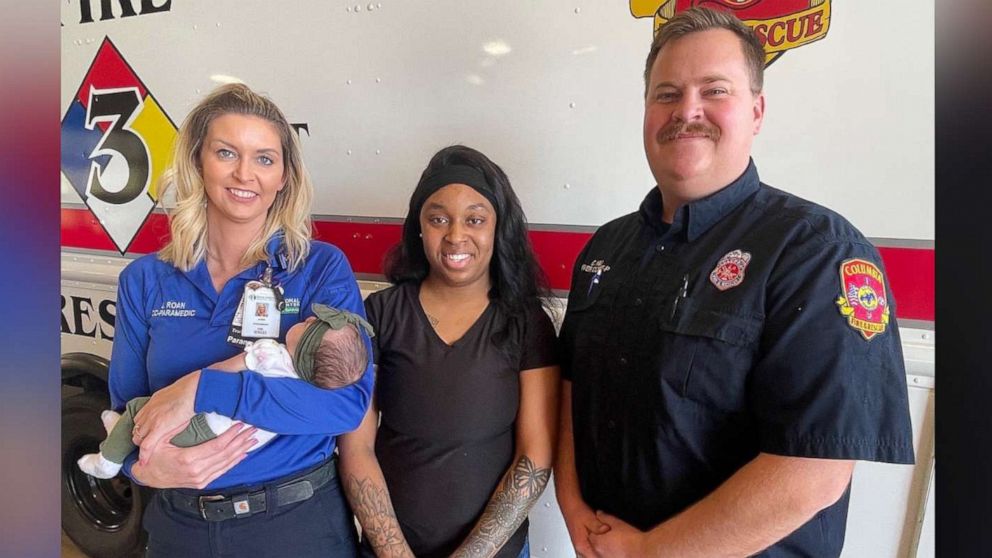 "I was shocked and blown away," Hill said. "Especially in the career that we have, you don't ever really get feedback much from patients. We pick them up and treat them and drop them off ... and we don't hear a lot back."

Garrett said she plans to keep taking Za'myla to the fire station and will make sure that her daughter always knows Roan and Hill.

"They saved her," she said, adding that when she and Za'myla visit the fire station, "They always have open arms. They love on her like she's one of theirs."