"There must be something in the water" in North Carolina.

At least that's what one firefighter turned photographer had to say when she heard that seven women from the same North Carolina town, all with ties to her old workplace were all pregnant.

Brianna Mitschele caught wind that her old captain from the City of Salisbury Fire Department and his wife Chelsea Cline were expecting -- but she didn't expect to hear the same good news from six more moms-to-be. 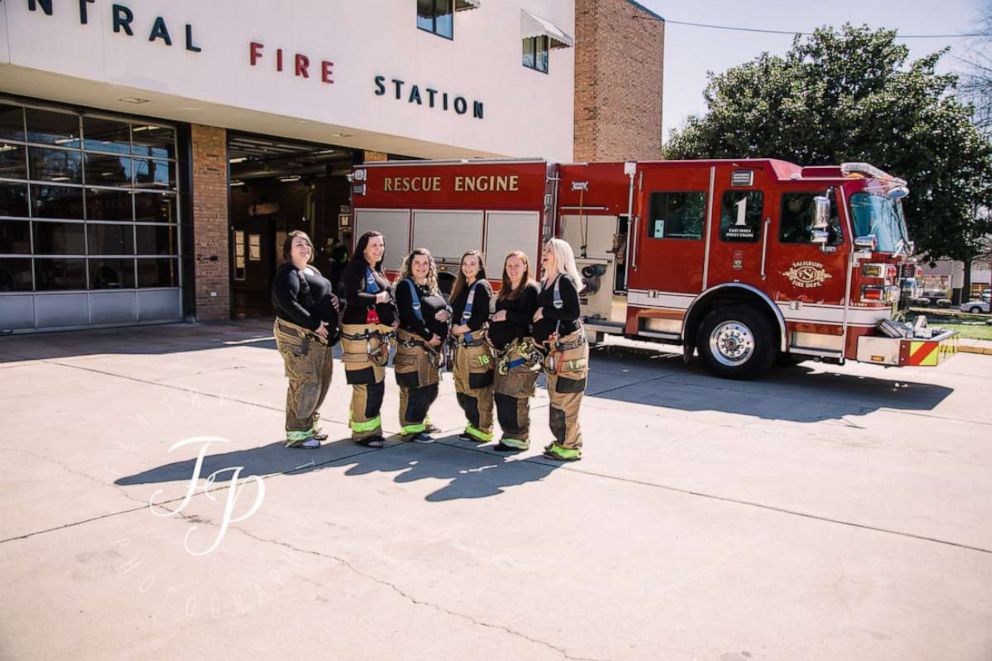 Mitcschele told "GMA" she found out just two weeks later that her friend Kaylen Renfrow and her husband Chris, who also works at the station, were expecting. "A week before the photo shoot we had more ladies say 'hey were pregnant too,'" Mitschele recalled.

All seven women, who are married to firefighters in Salisbury and due between now and September, got together for a fun-filled photo shoot at the firehouse on Saturday.

"It was a lot of fun, I thought 'this is my niche,' because these are some of my friends and I love the fire department," the photographer said. "Surprisingly the shoot only took an hour and a half --- when youre excited to do something it goes a lot quicker," she added about the exciting day. 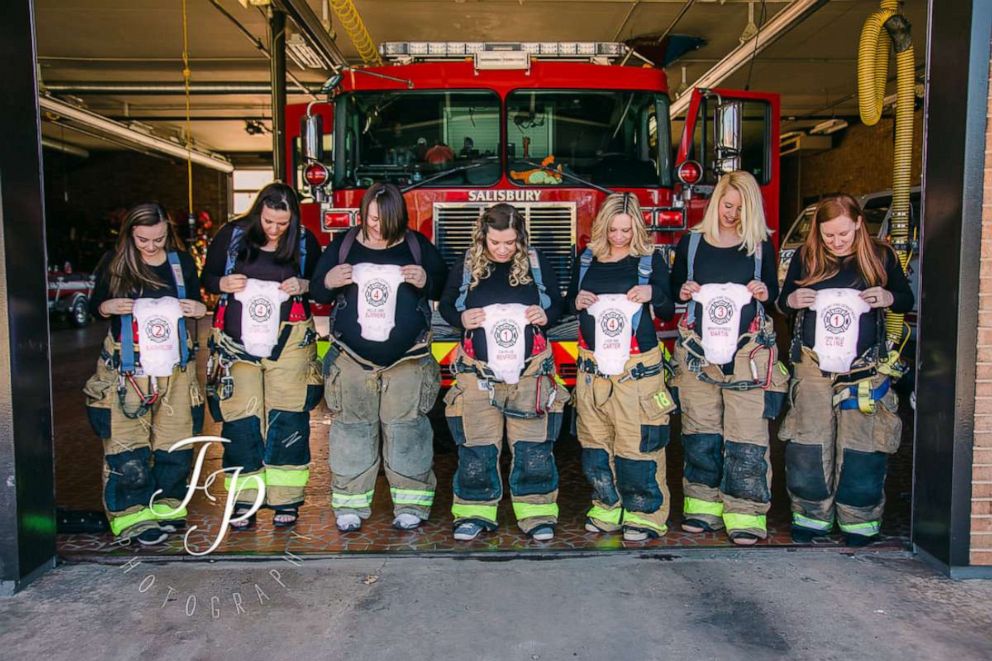 Cline, who has a 7-year-old son Jackson, said she is expecting her first daughter Cara "any day now." She and all of the first-time moms coordinated what to wear ahead of time, but Cline said they had a blast putting on their husband's uniforms.

"Its hard enough to put shoes on," she said laughing. "So it was pretty funny to have all these very pregnant ladies trying to put on turn out gear."

Mitschele even handmade onesies for each of the women with their babies names, the station number and their last names in a bright red font, just like how it would appear on their dad's gear.

"I wanted to do something special for the moms to say thank you so I decided to do onesies," Mitschele said. "We’re so excited to put them on the babies." 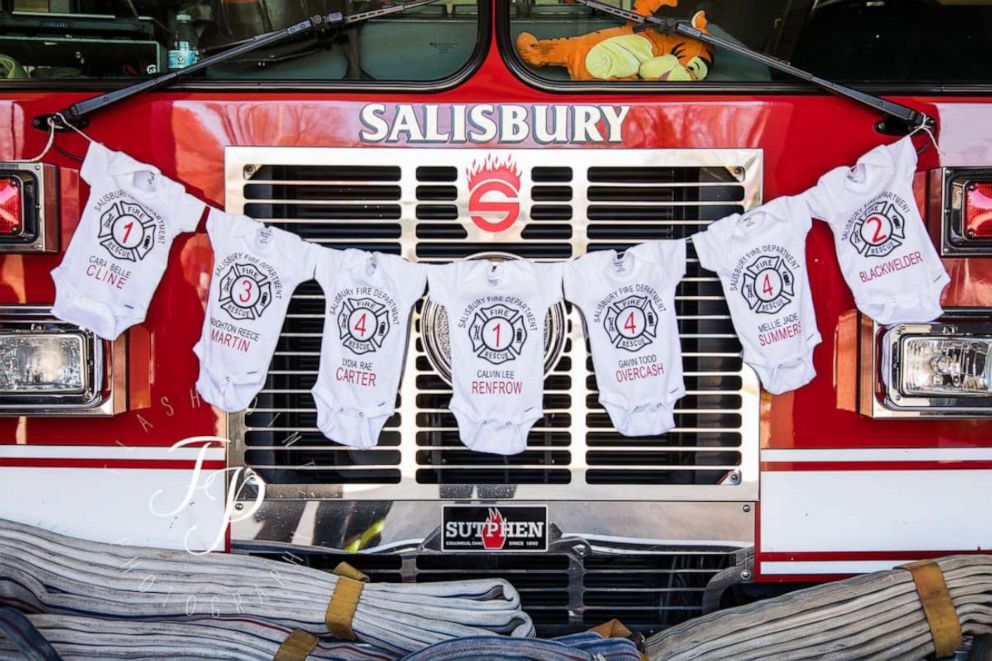 Cline's favorite shot of the entire day was one of the onesies resting on the rig.

"I really like the one with just the onesies because that was actually the rescue truck that my husband is the captain of," she said.

In all there will be five baby girls and two boys between the families come September.

"Everyone keeps saying theres something in the water," Mitschele said. But Cline clarified that none of the women planned to get pregnant at the same time. 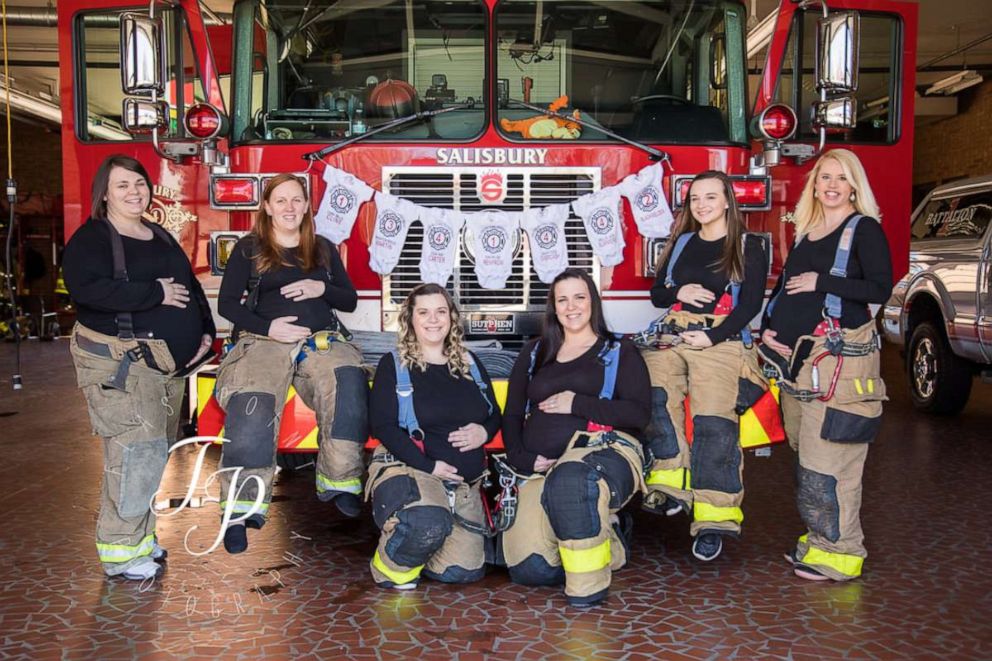 "Yes, we all did get pregnant at the same time and its a blessing," she said, "but we all have our own story."

Cline said the women who all stay connected on a group text chat will send everything from funny articles to their day-to-day health throughout the pregnancies and act as a support for one another.

"The ladies have offered, 'if your husbands on shift and you go into labor call me,'" Cline said. "To have those resources and somebody who could watch my son or drive me to the hospital, that's just really amazing." 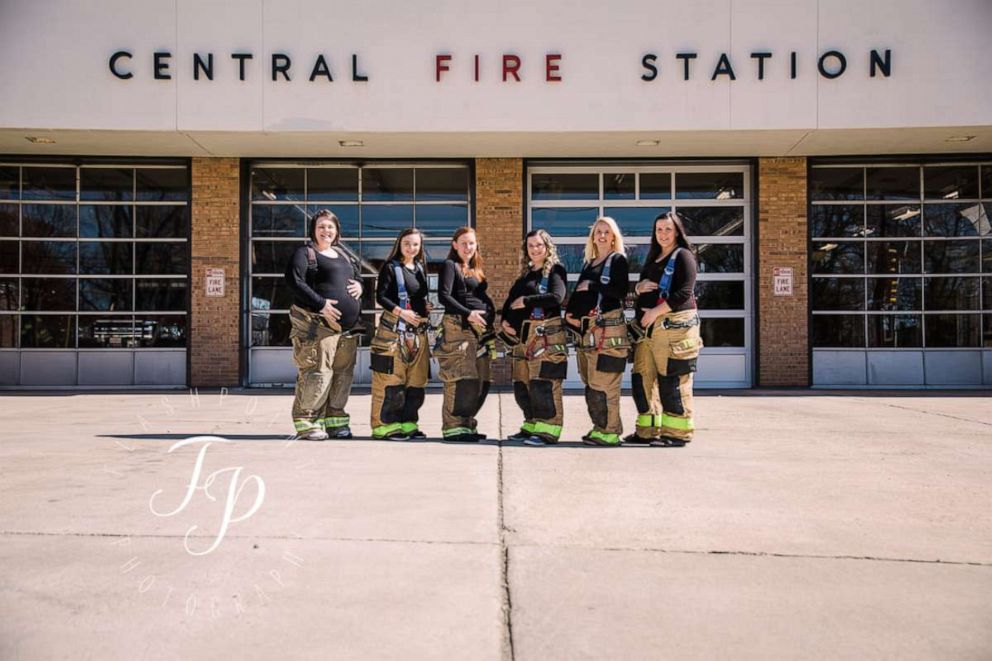 This shoot was for just moms while the dads were on shift or at home, but Mitschele said she already has plans to shoot with the dads in September once all the babies have arrived.

"We had a lot of fun capturing the moment and it's something that we can cherish for a long time," Cline said. "Hopefully our kids will look back on it and laugh."