As the coronavirus pandemic continues, an Illinois family tried to turn social distancing into an advantage when it came to celebrating their son's 7th birthday.

Carter Kosciuk wanted nothing more than to go see the new "Trolls World Tour" movie in theaters with his friends for his big day on April 23, but when that couldn't happen, his parents still found a way to give him the red carpet treatment.

Lindsay Kosciuk told "Good Morning America" that she and her husband Robert brainstormed birthday ideas for weeks for their son after their original party was foiled due to coronavirus concerns.

"I just thought, 'How can I make this special for him?'" she said. 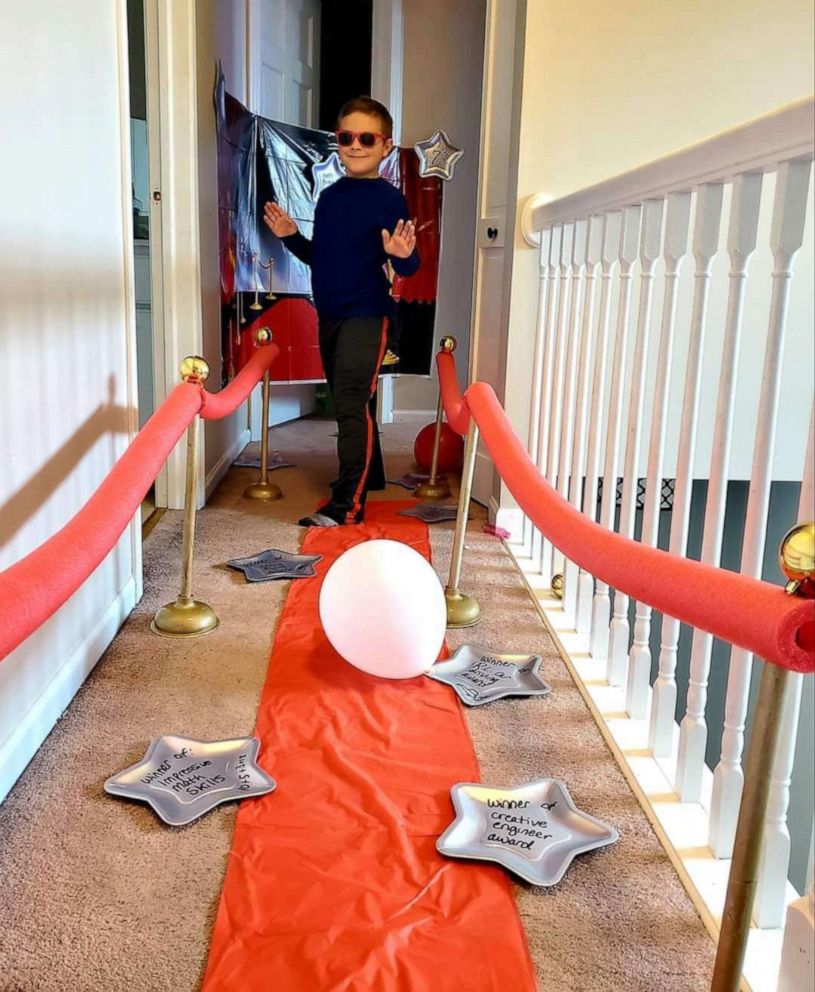 When you have extra limitations like this it makes you want to be extra creative.

Enter: "Quarantine Movie Cinema," or what the family nicknamed, "QMC."

The Kosciuks decided to transform the outside of their home into a drive-thru movie theater, complete with a giant 12-foot screen, treats and tickets and surprise Carter on his birthday.

Kosciuk, who a runs an educational YouTube channel called "Make It FUN Mom," has no shortage of family-fun ideas during quarantine, but says this she has never pulled off an endeavor of this scale before.

"When you have extra limitations like this it makes you want to be extra creative," she said.

The 37-year-old video editor surprisingly had everything she needed at her house already. 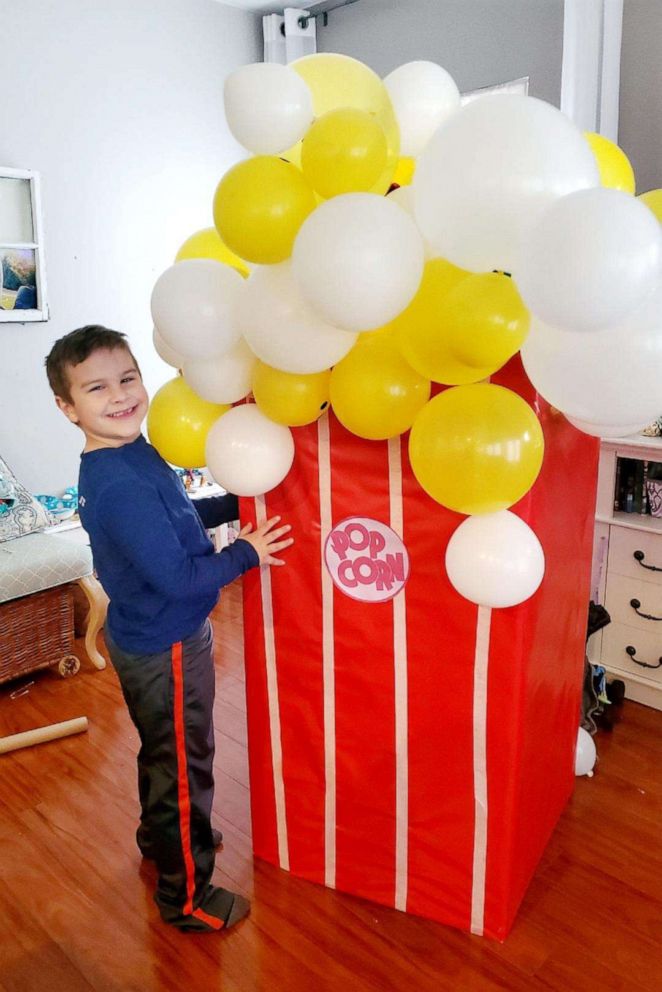 Courtesy Lindsay Roberts-Kosciuk
Carter poses with one of the props his mom made for his 'QMC' or 'Quarantine Movie Cinema' birthday.

The giant movie screen was stored in the house from another family member. She cut pool noodles and used red tablecloths to make a red carpet runway. She drew superlatives like "most impressive math skills" on silver plates to look like awards. The most expensive purchase she made was the $20 it cost to stream "Trolls World Tour" On Demand.

When the big day arrived, Carter woke up to a giant "popcorn box" prop outside his door that his parents made to hint that something big was in store. His older sister Katalina kept the birthday boy busy during the day while the parents snuck out all the decorations they had hidden.

When evening fell, Carter was shocked when he stepped out and saw the scene.

"When he's surprised he can't even talk, he's just looking around," Kosciuk said. 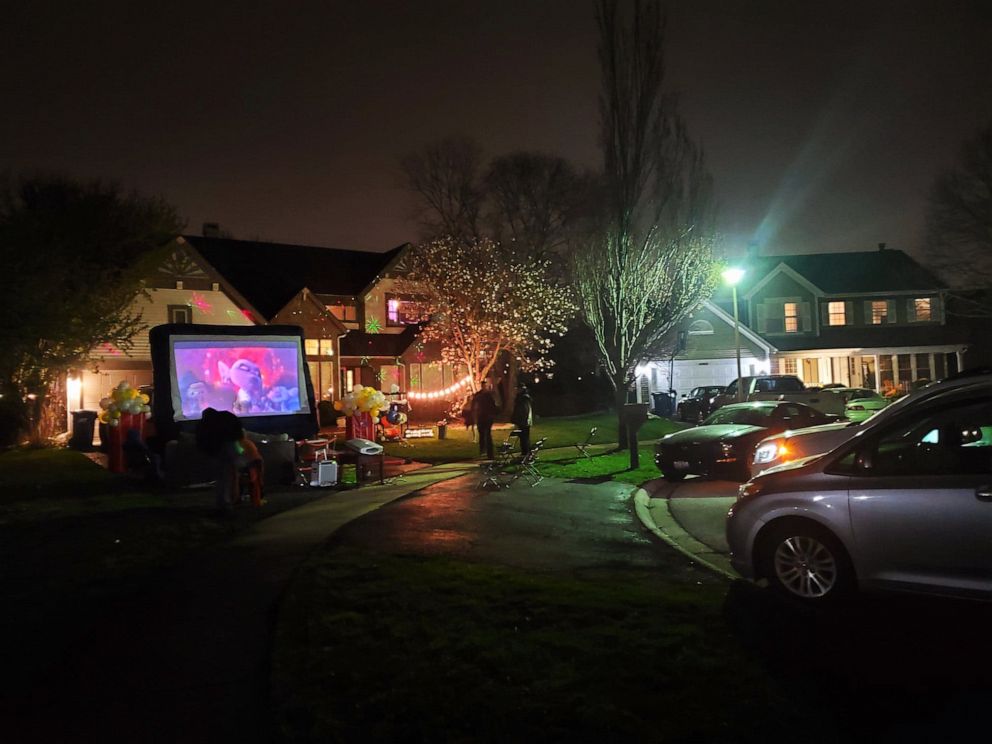 Courtesy Lindsay Roberts-Kosciuk
Instead of having a birthday at the movie theaters, Carter's parents planned a 'Social Distancing Drive-in night.

The Kosciuks even invited their neighbors, who joined in the fun by watching the movie from the comfort of their own cars. But it was Carter who had the best seat in the "house" after his parents moved their living room couch into the yard for the big event.

If you can do really special things, even with limitations, you are showing that things are going to be okay.

"Everyone was honking, he was almost in tears," the mom said.

Even though it wasn't the birthday party with his friends he had hoped for, Carter loved the getting the movie star-treatment from his family and neighbors.

The mom said it was especially important to make Carter feel special on his big day because, "for kids who are having their birthdays these months, it's such a downer ... [but that day], he felt like a VIP."

Since the big quarantine celebration, Kosciuk says parents have been reaching out to her for ideas for their kids' quarantine birthdays. She hopes that Carter's socially-distanced movie party helps give other families ideas of how to creatively celebrate their children's' milestones.

"If you can do really special things, even with limitations, you are showing that things are going to be OK," she said.