A Missouri woman is following in her father's footsteps — training to be a heart surgeon — and recently, the talented duo got the chance to perform surgery together.

Dr. Sophia Roberts, 30, is a general surgery resident physician at Barnes-Jewish Hospital in St. Louis, Missouri. Her dad, Dr. Harold Roberts Jr., 66, has been practicing medicine for the last 32 years and joined Barnes-Jewish as an associate professor of cardiac surgery last August.

In May, Roberts and his daughter teamed up for an aortic valve replacement, an unexpected opportunity the younger Roberts stepped up for when other doctors who would typically assist in the surgery were sidelined by COVID-19.

"I told Sophia that I had this case coming and she went out and read about it. And she'd never seen it, much less assisted on it," Harold Roberts recalled to "Good Morning America."

Even though the case was new to her, Sophia Roberts jumped at the chance. She had wanted to spend a month learning and operating with her surgeon father back in 2020, but their plans fell through when the pandemic started to intensify. So this was the shot she'd been waiting for.

When the day came, Harold Roberts was pleased to have his eldest child by his side and said it was a "really nice thing" to work together with her after both their initial nerves dissipated.

The elder Roberts said his daughter helped open the patient's chest and "she did a great job."

"It was really very smooth. I wouldn't have done the case any better if I had another heart surgeon assisting me," he said. 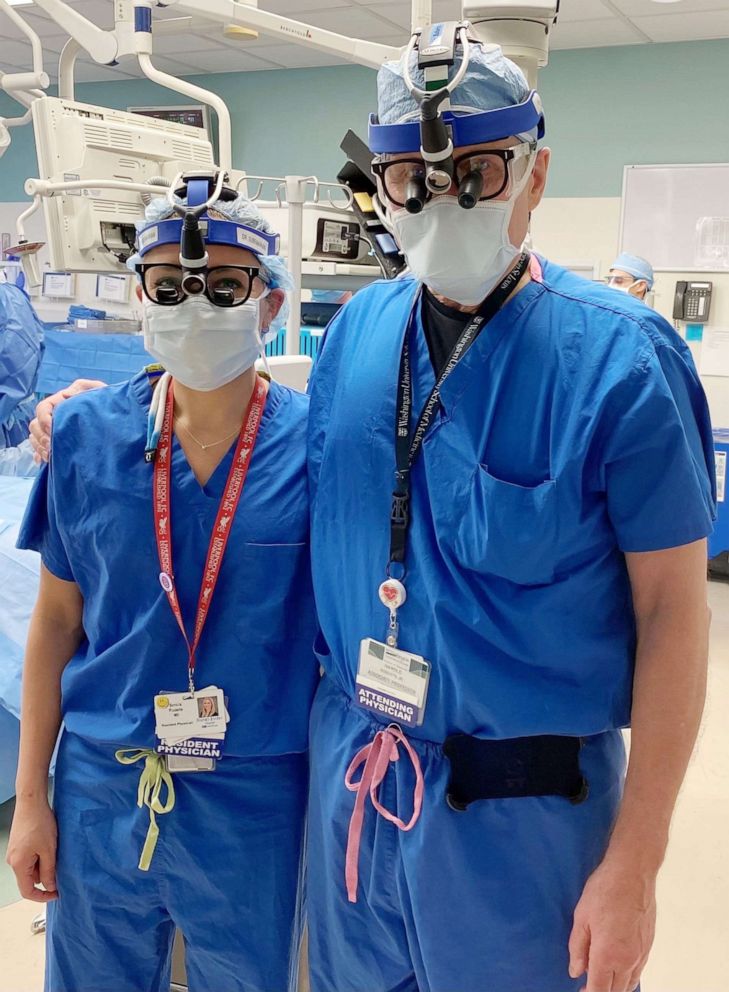 Courtesy Sophia Roberts
In May, Dr. Harold Roberts led a team, including his daughter, Dr. Sophia Roberts, in an aortic replacement valve surgery.

Sophia Roberts, who served as her dad's first assistant, said it was a memorable experience but also said once the surgery got underway, she was in the zone.

"It's very special that I was operating with him, but quite frankly, I could have been operating with anyone — like all of a sudden, you're just focused on that patient and making the operation go smoothly," she said.

Harold and Sophia Roberts reported their patient has done great since the surgery and was even excited the father-daughter team would be taking care of her.

"I saw her in clinic not long ago and she was very happy that her heart had made the news," Harold Roberts said.

A journey nearly 20 years in the making

Sophia Roberts' interest in medicine started at an early age. Harold Roberts said he took her to her first operation when she was around 11 years old.

"Instead of reading storybooks to her at times, I was showing her anatomy books and stuff like that. She really showed a real interest in that," Roberts told "GMA." 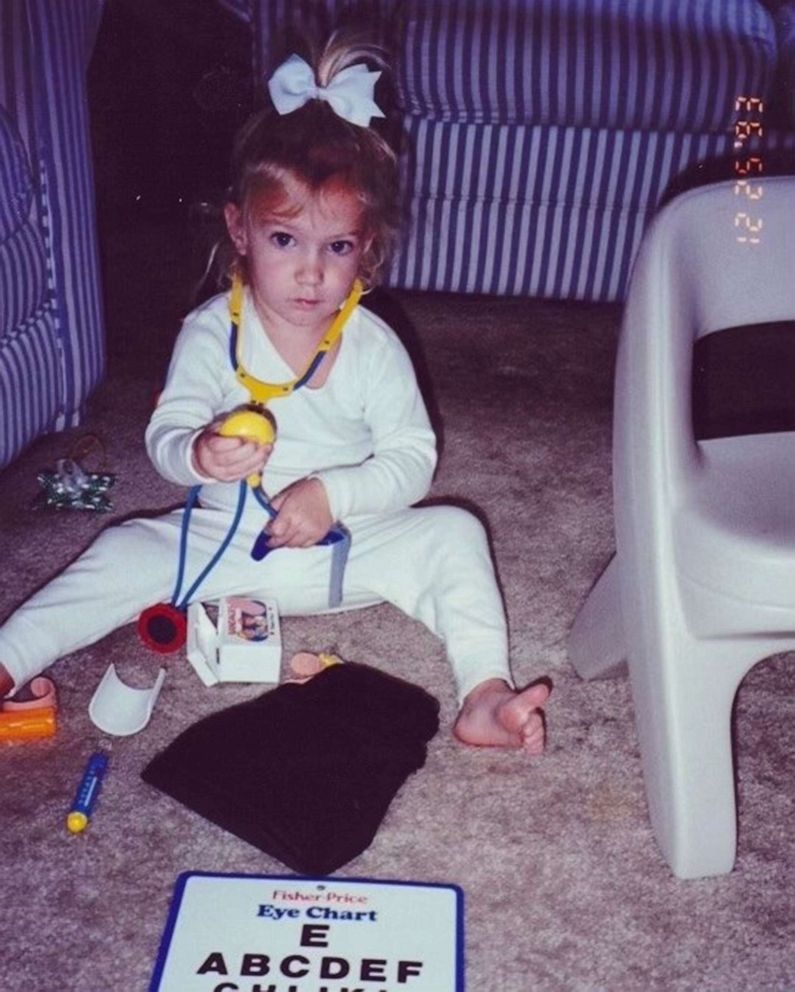 Courtesy Sophia Roberts
According to her father, Sophia Roberts showed an early interest in medicine and loved asking him about his work as a cardiothoracic surgeon.

"The first case that she saw was me repairing a mitral valve and instead of being some fidgety kid standing behind the ether screen there, she was riveted and actually pretty quiet. But I could tell from speaking with her afterwards that she'd really been intently watching it and seemed to really enjoy it," he recalled.

Sophia Roberts said that first experience was one she never forgot.

"In cardiac surgery, to work on the heart, you have to stop it and the blood still needs to circulate in the body. So you rely on this machine called the cardiopulmonary bypass machine that actually takes all the blood out of the body, puts oxygen back into it, and then recirculates it back into the body. So seeing that as an 11-year-old is also just pretty wild," she said.

"It was really interesting seeing the team aspect and seeing that my dad was the one, as the surgeon, who dictates the mood of the room and brings the whole team together. So it was very cool," the younger Roberts added. 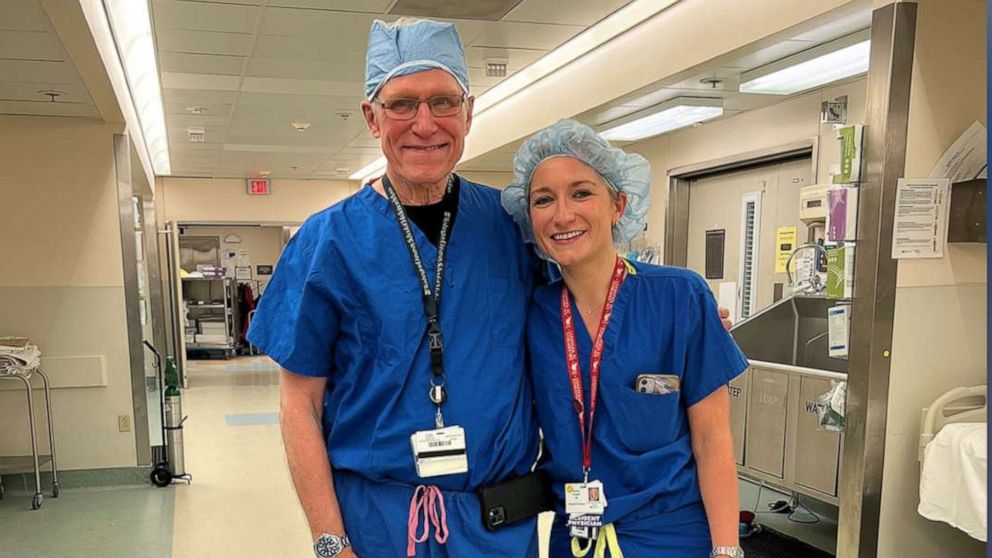 Today, the Robertses are excited to continue collaborating together. For the next year, Sophia Roberts is looking forward to digging into cardiovascular research, before turning back to surgery in her 7-year residency program at Washington University in St. Louis.

"The fact that we've made it this far and it's like weird enough that our paths have connected at this point, there's still a lot more to go," Sophia Roberts said.

But at the same time, Harold Roberts added, "What can be better? I taught this kid how to ride a bicycle a few decades ago. Now, to get to teach her how to operate on a human heart is pretty mind-blowing."