Twin Ukrainian boys who were born shortly after Russia began its attack in the country have been safely evacuated to Poland.

The twins' father, Alexander Spektor, who lives in Chicago with the boys' mother, Irma Nuñez, was able to meet his sons for the first time after their rescue Monday. The boys were born 10 days premature on Feb. 25.

"My sister told me that she never saw me spring that fast toward anything," Spector said of his rush to see his twin sons, Lenny and Moishe. "We saw the pictures and the videos before but just to see the little tiny human bodies in front of us was just out of this world."

The past two weeks have been agonizing for Nuñez and Spector, who was born in Kyiv and came with this family to the U.S. as a refugee.

Nuñez and Spektor, who is now an American citizen, worked with a surrogacy agency to have a surrogate in Ukraine carry their sons.

When the surrogate went into early labor on Feb. 25, she got stuck in military traffic for three hours trying to make it to a hospital in Kyiv that was equipped to handle the delivery, according to Spektor.

The boys were born safely, weighing around 4 pounds each, but had to remain in the hospital due to their medically sensitive status as premature babies. 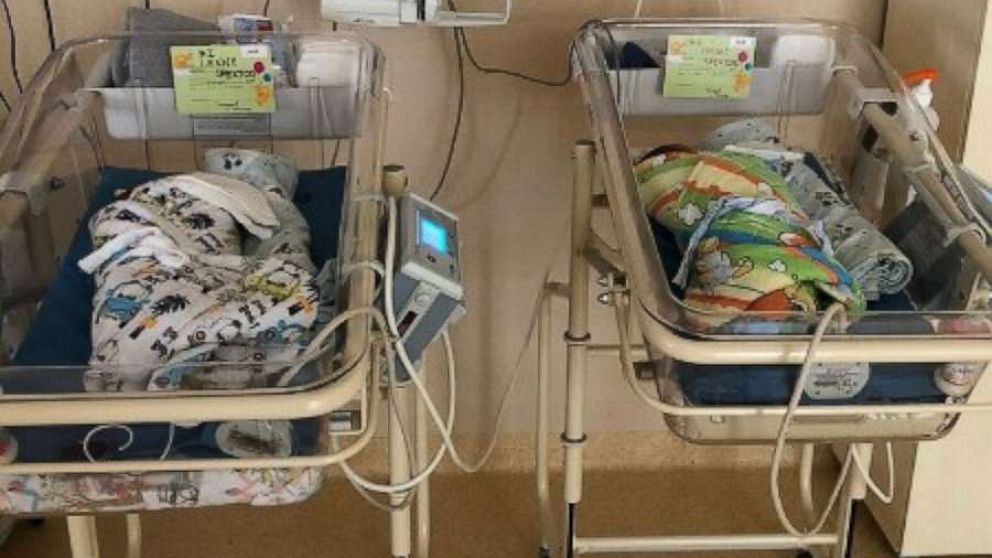 Nuñez and Spektor, an associate professor of Russian at the University of Georgia, spent the days and nights following their sons' birth trying to evacuate them to safety.

"We haven't slept in about 14 days," Spektor said of himself and Nuñez. "We were taking shifts, and we were constantly making phone calls."

He continued, "The hospital where the babies were before they were transferred to a different hospital didn't have food for premature babies so we had to organize a food delivery for them. They didn't have a shelter, so the agency we were doing the surrogacy with helped to transfer the babies to another hospital that had a shelter. It was just harrowing and horrible."

MORE: US families adopting kids in Ukraine speak out as process put on hold

Spektor and Nuñez had been unsuccessful in getting their twins out of Ukraine until Vecina, a Texas-based immigration rights organization, connected them with Project Dynamo, a volunteer-run organization in Florida that works independently to rescue people in war zones.

Bryan Stern, the founder of Project Dynamo, agreed to go into Kyiv with a team of doctors, neonatal specialists and a nurse to rescue Lenny and Moishe, as well as another premature baby not related to the family but also in need.

Stern and his team partnered with a Ukrainian ambulance crew to drive a three-vehicle convoy through Kyiv to the hospital and back across the border into Poland, dodging traffic and checkpoints along the way, according to Stern.

The vehicles were equipped with not just medical equipment but also extra gasoline, hot water bottles and hand warmers to protect the babies if anything happened.

"We were moving as expeditiously as we could," Stern said of the 14-hour journey. "We were driving on the wrong side of the road. We were bypassing all the checkpoints and all the traffic with the checkpoints." 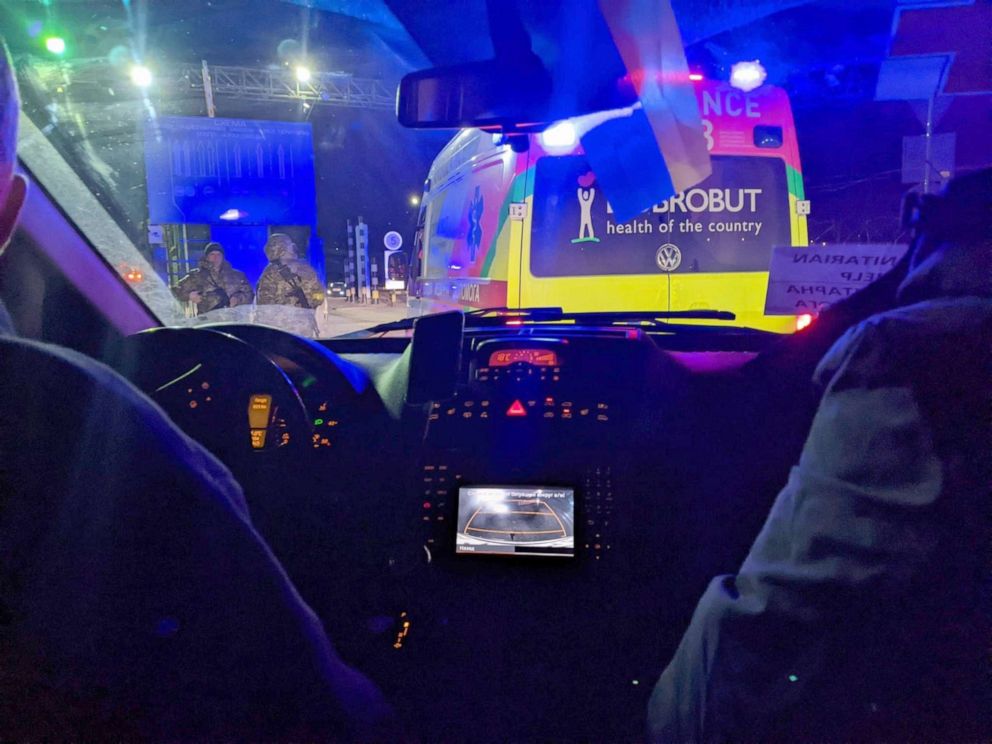 Project Dynamo
Project Dynamo's Bryan Stern drove through the streets of Kviv, Ukraine, to get premature twins born to Alex Spektor and Irma Nuñez to safety.

Stern and his team successfully evacuated the three babies and the boys' surrogate, who was not named. The surrogate was reunited with her biological son in Ukraine and they are now working to safely evacuate her out of the country, according to Spektor and Stern.

Stern said this was his first time rescuing premature babies from a war zone, adding, "I really can't articulate in words the anxiety that I had for for about three, four days culminating with pulling into the hospital of Poland."

"It was pretty amazing," he said of the rescue. 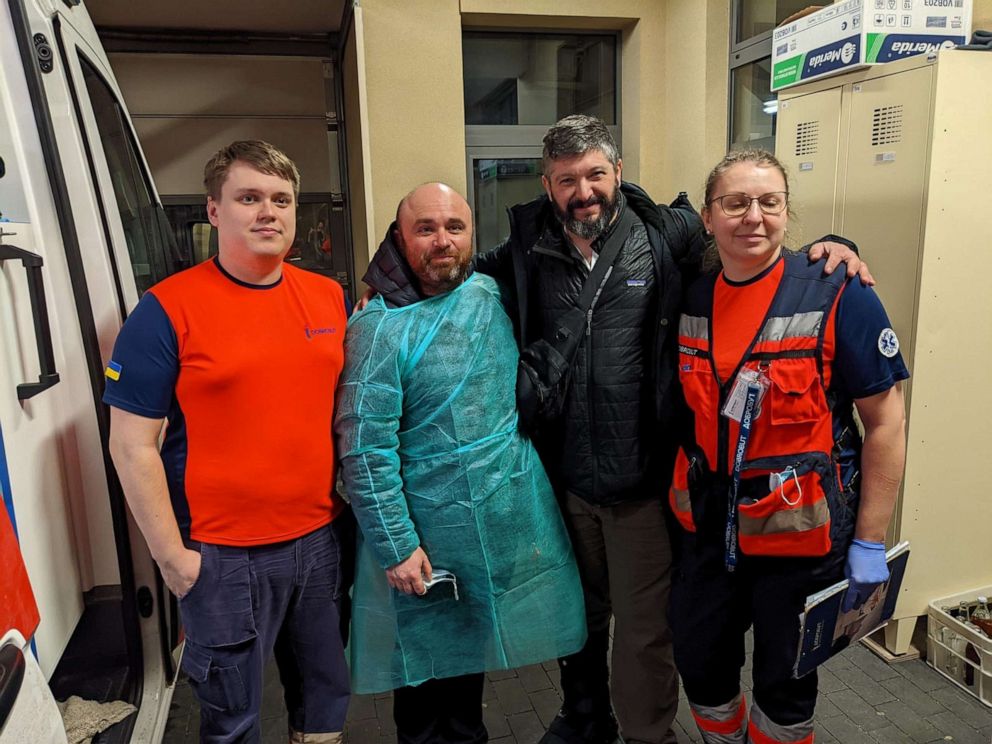 Spektor met his sons for the first time near the border in Poland, and then traveled with them to a hospital in Rzeszow, Poland, where they are now being cared for by hospital staff.

"We visit them in the hospital every day now and just touch them," he said, adding that the babies are doing well medically. "I changed my first diaper yesterday and that was tough. I almost passed out."

"It was almost as scary as waiting for them," Spektor added with a laugh.

Describing his and his partner's joy, Spektor said, "We had two happiest days of our lives -- when they were born and two days ago, when they were brought into the hospital."

The twins will remain in Poland for a few more weeks, until they gain more weight and are able to bottle feed, according to Spektor. 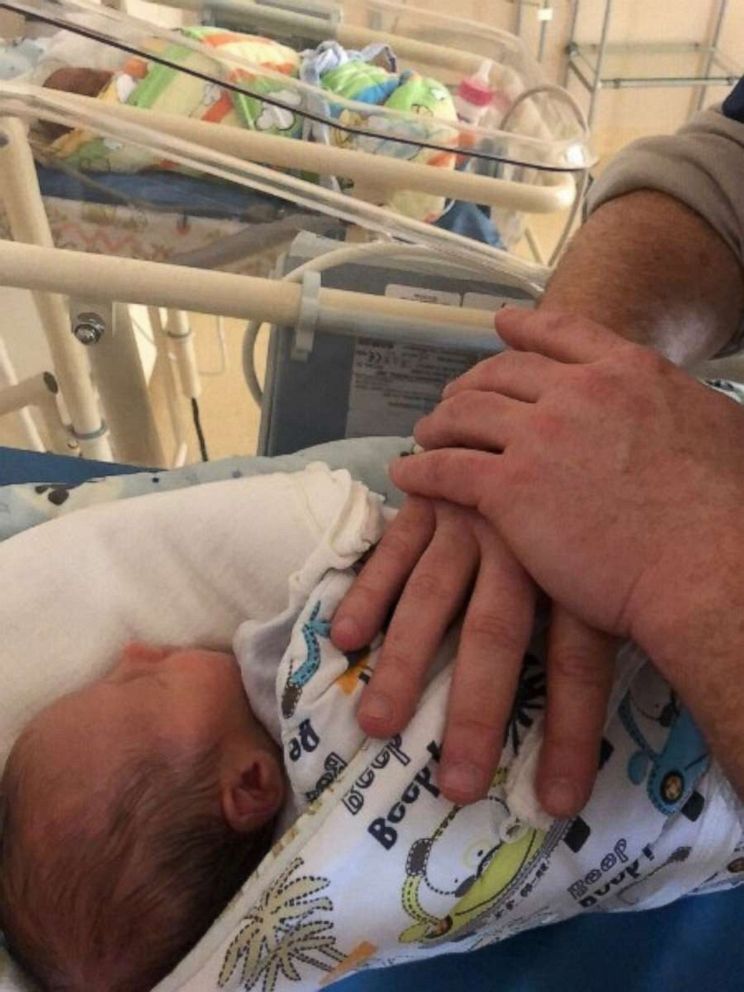 Courtesy Alex Spektor and Irma Nunez
Alex Spektor rests his hands on one of his twin sons, with the other in the background, after they were rescued from Ukraine.

Then they will return to Chicago where "a lot of people are waiting for them," according to Spektor, who said family and friends are preparing the boys' nursery at home.

"You never expect a war to break out when when you're preparing for the baby, so a lot of our stuff is in storage now," he said. "But there's so many people who are willing to help, and they're painting the babies' room as we speak right now."

Though he is overjoyed to have his sons with him, Spektor said he cannot forget about the children who remain in Ukraine.

More than 4,300 babies have been born in the country since the conflict with Russia began, according to a Facebook post from Ukraine's Ministry of Justice.

"Our babies are [in Poland] now, they're safe, but there's so many other children in Ukraine," said Spektor. "It's heartbreaking."