A Florida dad is going viral for his response to critics who called his daughters' homecoming dresses too revealing.

Matt Austin, a news anchor for WKMG-TV in Orlando, shared a photo on Facebook earlier this month of himself posing with his daughters Addison, 17, and Olivia, 14.

"My daughters look a little too good on homecoming night," Austin captioned the photo. "Believe it or not, they’re even more beautiful on the inside."

Austin told "Good Morning America" he posted the photo as a "proud dad moment" on the night that his daughters, who are a senior and freshman at the same high school, who would be attending their only homecoming dance together.

Later that night, Austin said he checked his phone and saw the photo had received more than double the comments that he receives on average on his posts.

"As I looked, I saw sort of the nasty comments, that I'm a bad father, how could you, so scandalous, that sort of rhetoric happening," said Austin. "I was stunned."

Among the comments that Austin said his post received were statements such as, "Those girls are too young to be dressing provocatively. They should have respect for themselves," and, "So sad that parents think it's ok to send the young ladies out with everything showing."

Austin, who also has a 7-year-old daughter, said he was shocked that people who didn't personally know him or his family would comment on his kids, and especially on their appearance.

He said he also immediately saw a double standard in how people responded to his daughters' dresses versus if he had posted a photo with a son.

"You would never see anybody comment on your son's clothes. That would never happen," said Austin. "They could be out there in their Speedos for their swim team, and nobody has a problem with that."

Austin added that his daughters went to homecoming in a big group that included nearly two dozen female high school students, and all of the girls' dresses were the same length as his daughters'.

Austin said he was angered by the comments, and the next day, he filmed a TikTok video in which he responded to the negative remarks.

"Let's get something crystal clear," Austin says in the video. "It's not my daughter's job to make sure your son is focused in school. Also not her job to dress hideous enough to where your son doesn't assault her."

Austin said in the video that he does not tell his daughters what they can and cannot wear.

"If I start dictating what my daughters wear, I'm going to teach them three things," he said. "A) They'll start to hate me for arbitrary rules. B) They'll start to lie to me. Or, C) Maybe even worse, that it's OK for a man to tell them what to wear because they look too good." 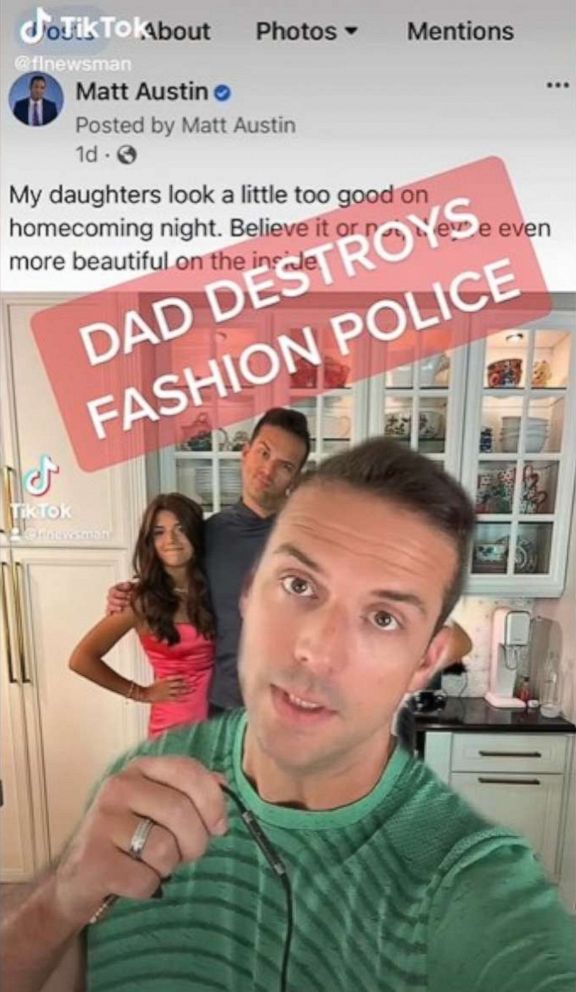 Courtesy Matt Austin
Matt Austin, a news anchor for WKMG-TV in Orlando, took to TikTok to respond to comments about his daughter's homecoming dresses.

Austin said he showed the video, titled "Dad destroys fashion police," to his teen daughters for their approval before posting it on his account, where it now has over 1 million likes.

MORE: High school said it will not hand out 'modesty ponchos' at the prom

"They both were like, 'It's a good message, go ahead,' " Austin recalled, adding that he feels the incident turned into a good learning experience for his daughters.

"I talk a lot in my house about never taking criticism from someone you wanted take advice from," Austin said. "There are a lot of people online that are going to give us advice and criticism and it's good to be able to tune it out and just kind of focus on what you know is right."