One dad is going the extra mile for his daughter -- literally.

Chris Brannigan, 41, from England, is currently walking 1,200 miles barefoot from Maine to North Carolina in order to fund research on gene therapy for his daughter Hasti, 9, who has a rare genetic disorder called Cornelia de Lange syndrome.

Although the exact number of cases is unknown, the CdLS Foundation estimates that CdLS occurs in 1 in 10,000 live births.

"If you have a rare disease you don't have the same treatment options or the same quality of healthcare so parents like us have to fight endlessly," Brannigan told "Good Morning America." "The sad truth is there's just no money for rare disease research so it's left to families like ours to undertake these fundraising campaigns just so we can get treatments for our kids." 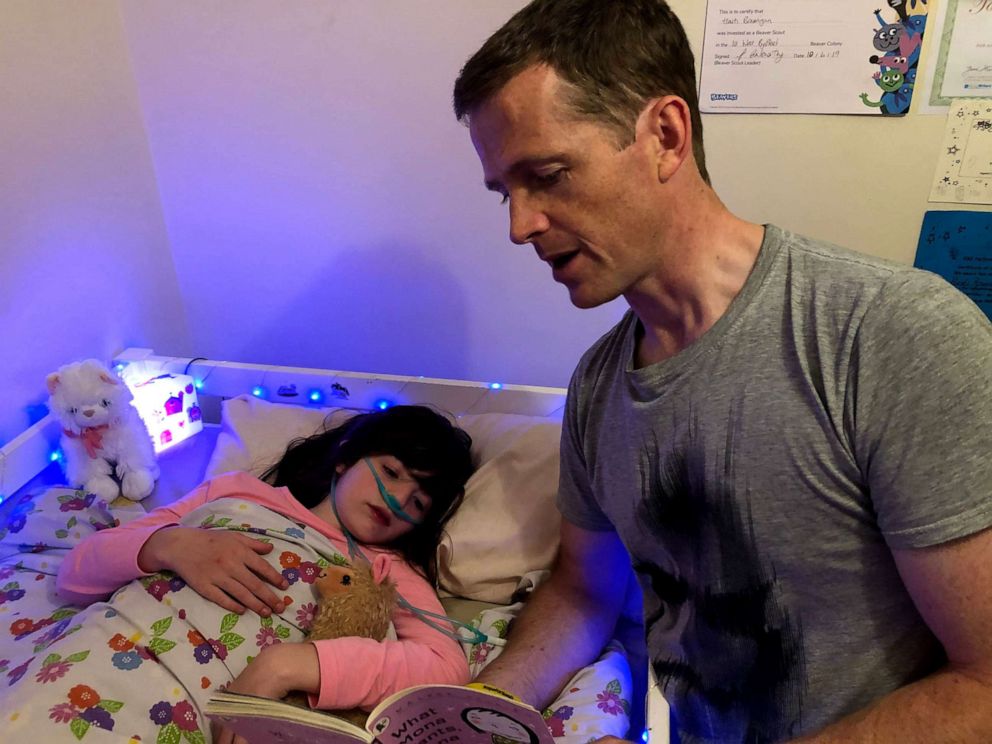 "It gets worse over time," Brannigan said. "For my wife and I, that was really frightening."

There were so many indications but the diagnostic odyssey in the rare diseases world is so long and painful.

After Hasti was born, Brannigan said he and his wife, Hengameh, "knew straightaway something was wrong."

"She looked unhealthy to us," he said. "She was jittery. She was underweight. When we got her home from the hospital, she had a seizure within the first 24 hours." 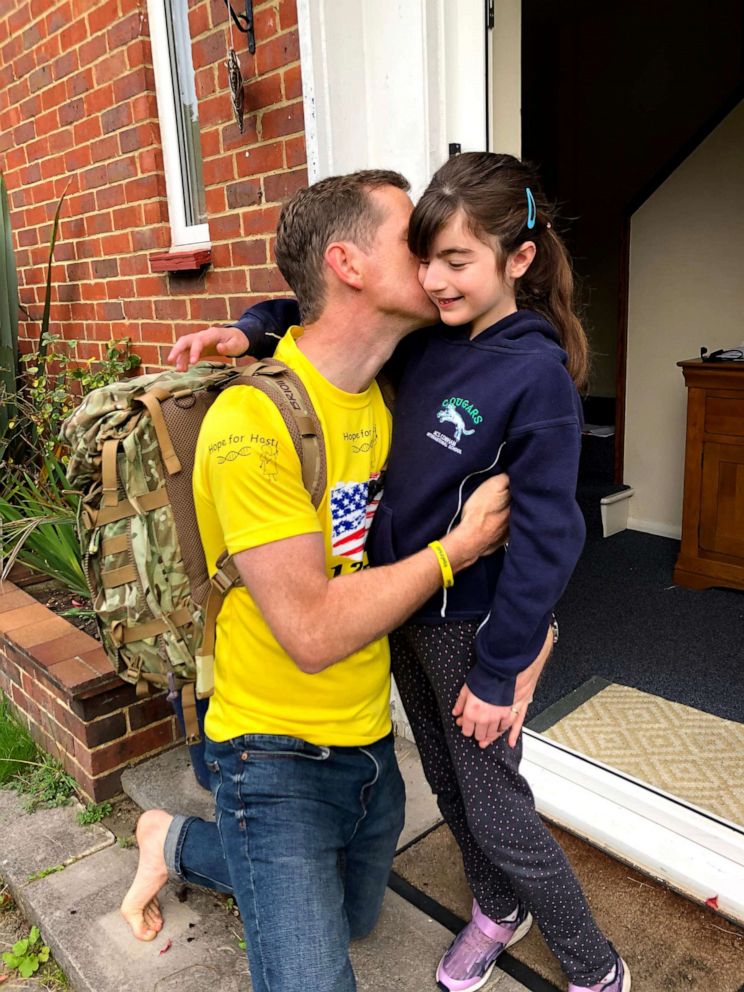 Courtesy Brannigan family
Chris Brannigan, 41, saying goodbye to Hasti, 9, before his barefoot walk in 2020.
MORE: These parents created a nonprofit to find a cure for son's rare disease

Many of Hasti’s developmental milestones were delayed. Brannigan said she didn't walk until she was almost 2 years old and didn't feed voluntarily for the first year of her life.

"There were so many indications but the diagnostic odyssey in the rare diseases world is so long and painful," he said.

At age 4, Hasti had blood tests done to check for CdLS but the results came back negative, much to the family's relief.

"I sort of did a little jump for joy because we knew how difficult a condition it was, having researched it after speaking to the doctor," Brannigan said.

To figure out what could be wrong, Hasti was then enrolled in the 100,000 Genomes Project in the U.K., where they sequenced her genome and looked for common gene errors or mutations. The project took two years, Brannigan said, and the new results showed that she did actually have CdLS.

Parents have to be experts because no one else is.

To manage the disorder, Hasti receives a number of daily treatments, such as hormone replacement therapy via injections and speech and language therapy.

"The cycle of therapies and medical appointments is just never-ending,” Brannigan said. 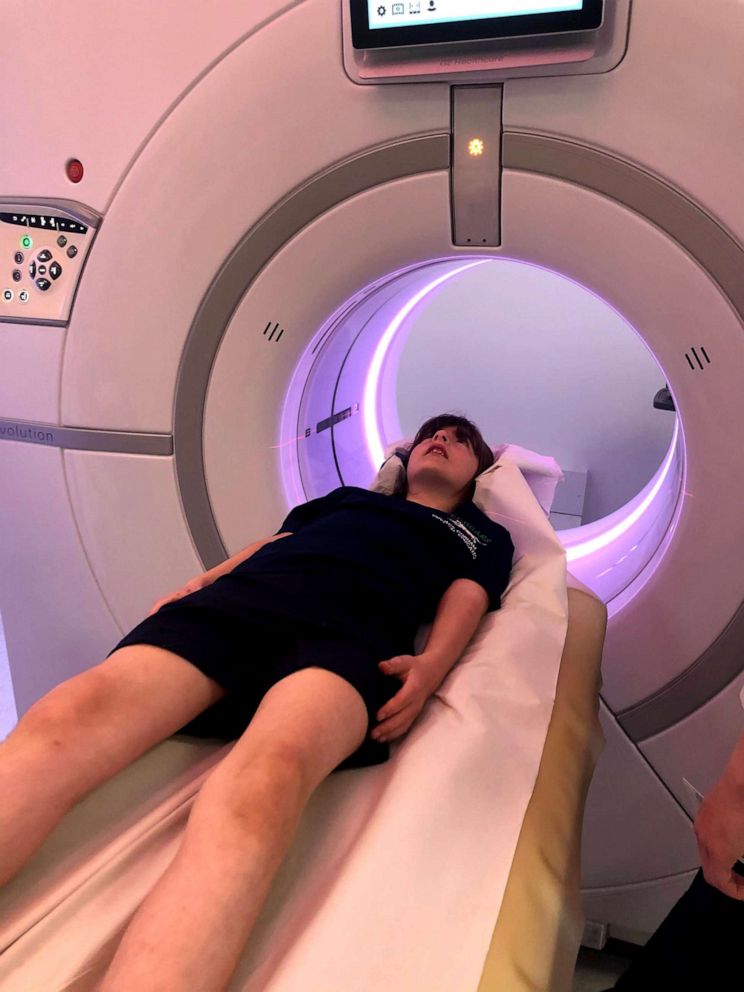 Courtesy Brannigan family
Hasti, 9, getting an MRI in an undated photo.

The fact that CdLS is a rare disease means not much is known about it and how to treat it, which is why Brannigan said he and his wife have had to become experts on the disorder.

"If your child has something terrible like cancer, doctors know what to do because they're well-practiced in those things," he said. "But if your child has a rare disease, they just don't know and that causes a lot of anxiety for parents."

He added, "Parents have to be experts because no one else is."

The reality of having a rare disease

After Hasti received her initial diagnosis, Brannigan said he and his wife reached out to numerous doctors around the world to ask them to take a look at gene therapy as a way to help manage the disorder.

"Through online research we came to realize that other rare conditions like spinal muscular atrophy were achieving gene therapies that were transforming children's lives," he said, adding that several medical professionals said they would be willing to look into it but it would take “a lot of time” and “cost huge sums of money.”

"When we realized something could be done, we were presented with a question, which was: 'Do we do this? Do we throw everything we have at our disposal at creating a therapy for Hasti and all the other kids with CdLS? Or do we consciously not do that?'" he said. "As parents I don't think there's any other choice you can make. You can't choose to not help your child."

A post shared by CdLS Hope For Hasti (@hopeforhasti)

The family created the charity, Hope for Hasti, in order to raise the money for research into CdLS gene therapy. After consulting doctors and researchers on how much would be needed to fund the research, they set a $3 million target.

"Raising money has been incredibly hard through the pandemic so my wife and I decided that we should run a fundraising event that would help focus people on not just fundraising but also how difficult it is to manage the life of a child with a rare disease," Brannigan said.

According to Dr. Wendy Bickmore, director of the MRC Human Genetics Unit at the University of Edinburgh, gene therapy will likely not be a cure but a way to treat some of the disorder’s symptoms.

“Gene therapy encompasses several things,” Bickmore told “GMA.” “It can be adding back in an extra copy of the gene, which has been mutated, or it can be gene editing where you go in with these CRISPR molecular scissors and try and correct the actual spelling mistake of the genome. They both have the ultimate aim of trying to repair the genetic defect.”

MORE: Her daughter may die by age 10, but this mom keeps fighting to cure her rare disease

All of the preclinical research will be handled by the Jackson Laboratory in Bar Harbor, Maine. According to Dr. Cathleen Lutz, the lab’s senior director, they’re working with mouse models with various genetic mutations, including one with Hasti’s specific mutation. As CdLS can be caused by any number of genetic mutations, a therapy that works for one may not work for another.

“I think we all recognize we’re in uncharted territory, no one is rushing here,” Lutz told “GMA.” “We’re trying to explore the potential for these therapeutics. Even if gene therapy turns out not to be a path forward for CdLS, we’re going to have so much information to plug into new potential therapeutics.”

In a recent statement, the CdLS Foundation announced a partnership with Jackson Laboratory to coordinate research efforts for all genes implicated in CdLS. The goals of the collaboration include advancing basic science around the disorder, creating a centralized repository of existing and new mouse models with CdLS features, and testing various treatment options. 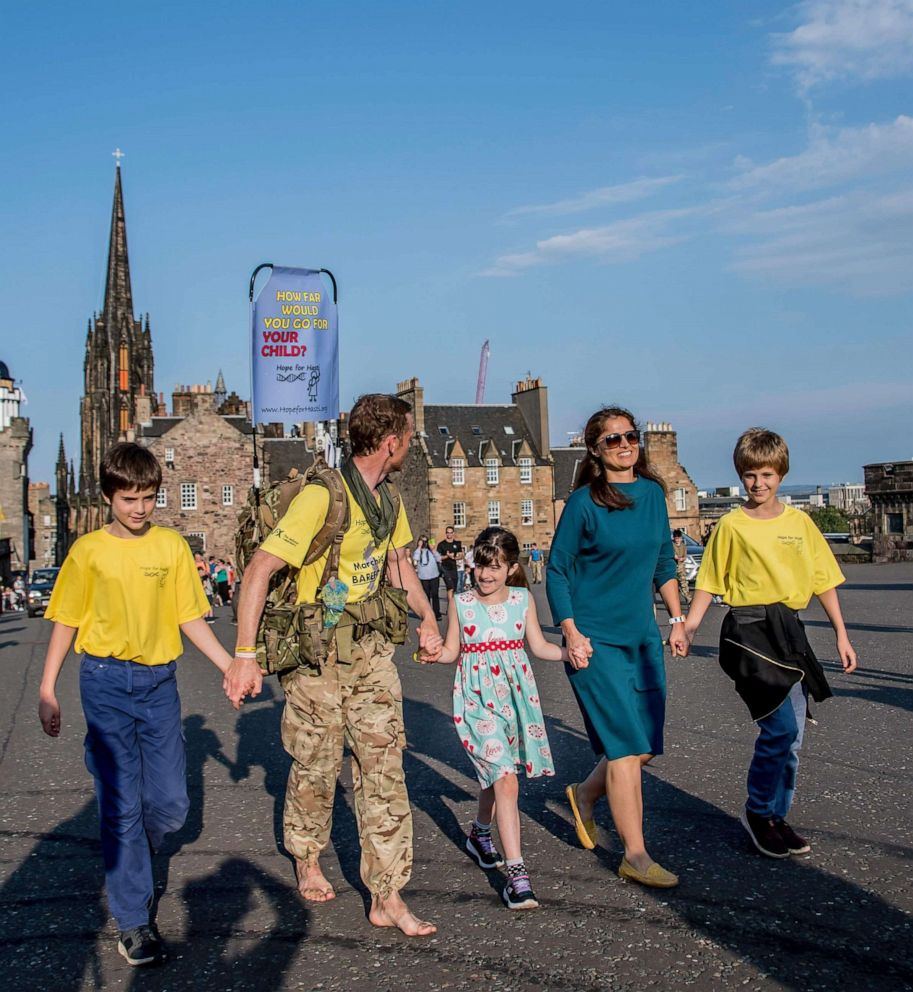 A British army major, Brannigan calls himself the "Barefoot Soldier."

"The idea of being barefoot is to make it really difficult because Hasti's condition makes her life incredibly challenging," he said. "Things that other children find easy, she finds very hard. It seemed only fair that I do something that was equally difficult and challenging."

Brannigan has already completed one barefoot walk so far. From July 6 to August 18, 2020, he walked 700 miles from Land's End in England to Edinburgh in Scotland.

"I wounded both of my feet," he said. "It took weeks for them to heal." 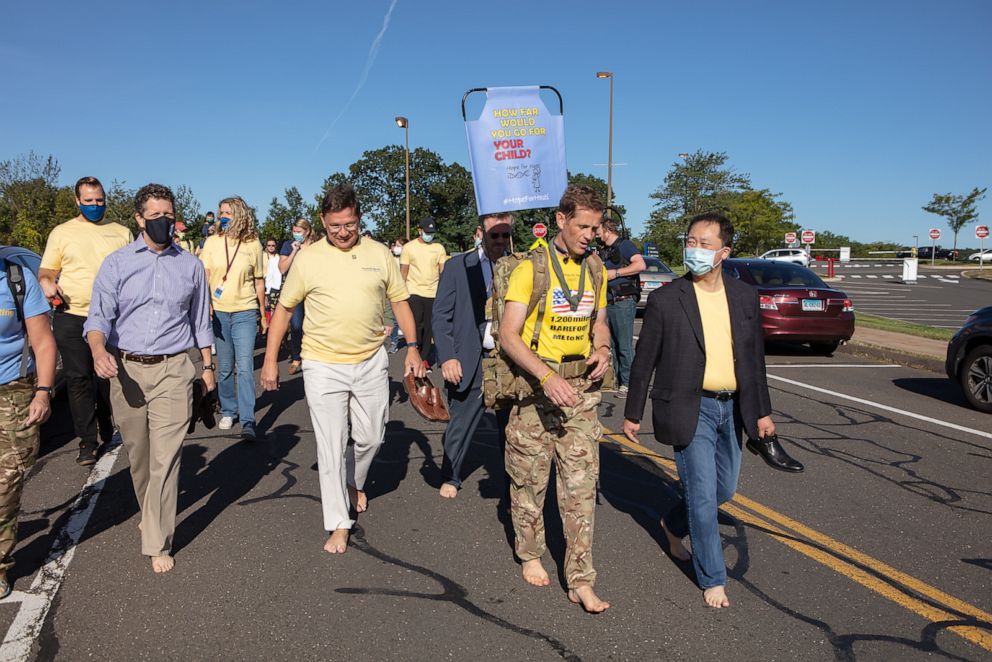 His current walk will see him do 1,200 miles through 12 states over 53 days. So far, Brannigan's made it well over halfway and expects to complete the journey in late October.

"It's been incredibly painful and I think I have nerve damage in my foot," he said. "I've cut my feet. I've stood on glass. I've had more blisters than I can count. I've encountered some really challenging road conditions and it's slightly dangerous."

Though Brannigan plans to finish out the walk no matter what, the kindness he's experienced along the way has kept his spirits up. People have walked with him for parts of the journey, given him food and drink, and even housed him for a night.

"Hasti is a child like every other child who has hopes and dreams and we want her to realize those," he said. "She deserves to be happy and healthy."

Editor's note: According to ABC News' Medical Unit, "Although every disease is different, gene therapy can pose some risk to those who receive it. The 'good gene' that is intended to replace the mutated gene may accidentally go to the wrong place. This can lead to damage of healthy cells or overproduction of unwanted cells. A person’s body can also attempt to attack the drug which can lead to inflammation and illness. All of these risks should be researched and evaluated before doctors recommend gene therapy to a patient."