A deployed father surprised his wife and met his baby daughter for the first time, live on "Good Morning America" Friday.

Cassie Whelan thought her husband, Josh Sarpu, was on Skype from a military base in Texas, but when he finished saying "I love you," he came out from behind a wall to surprise everyone. 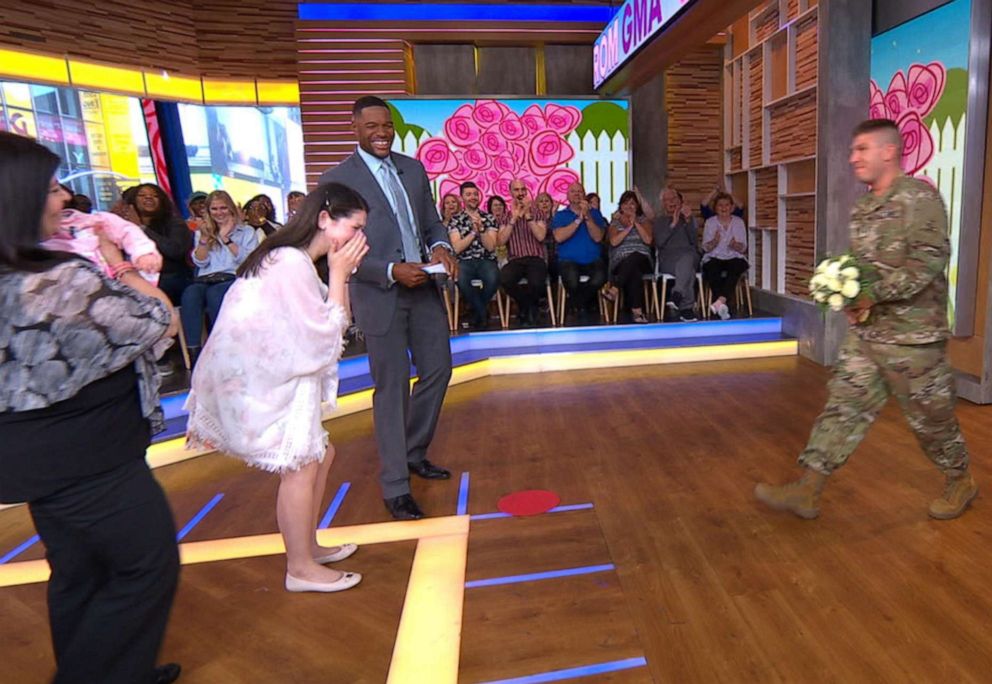 "You know what, can we move the wall?" Sarpu asked as he made his grand entrance. Sarpu immediately rushed into his wife's arms and then held his baby daughter, Savanna Belle Sarpu, for the first time. 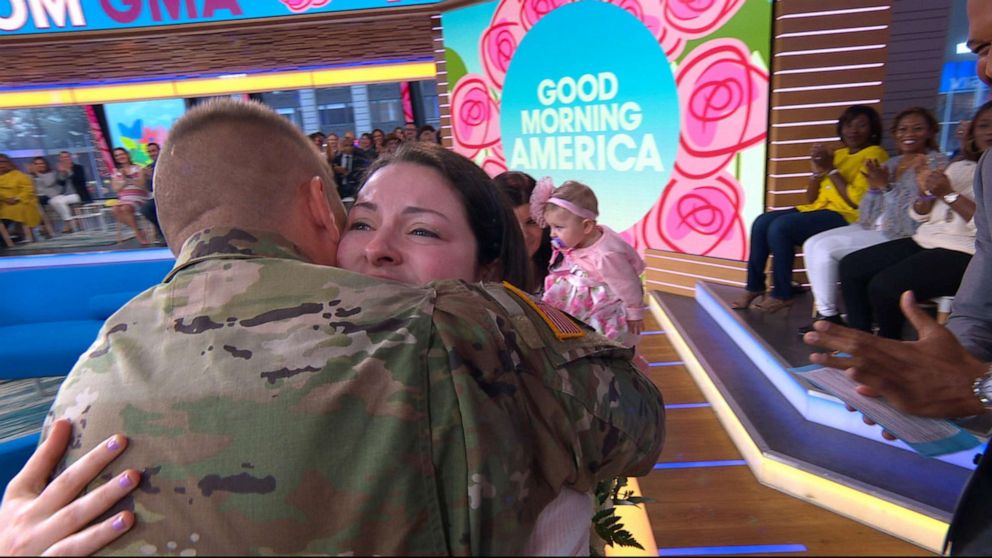 Whelan said she was completely caught off guard because she thought he was coming home Monday.

"I thought I would spend [Mother's Day] alone," the first time mom said. "It's going to be even better now." 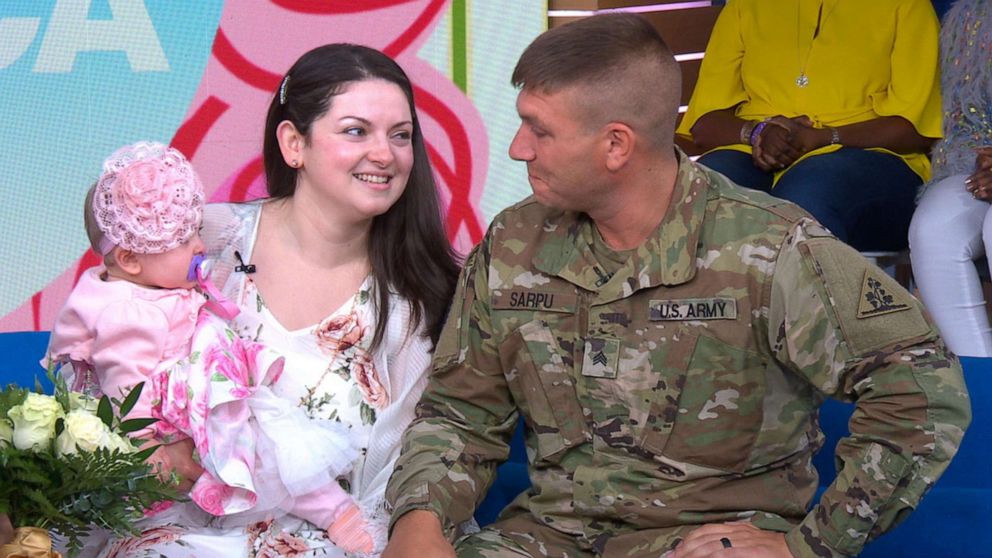 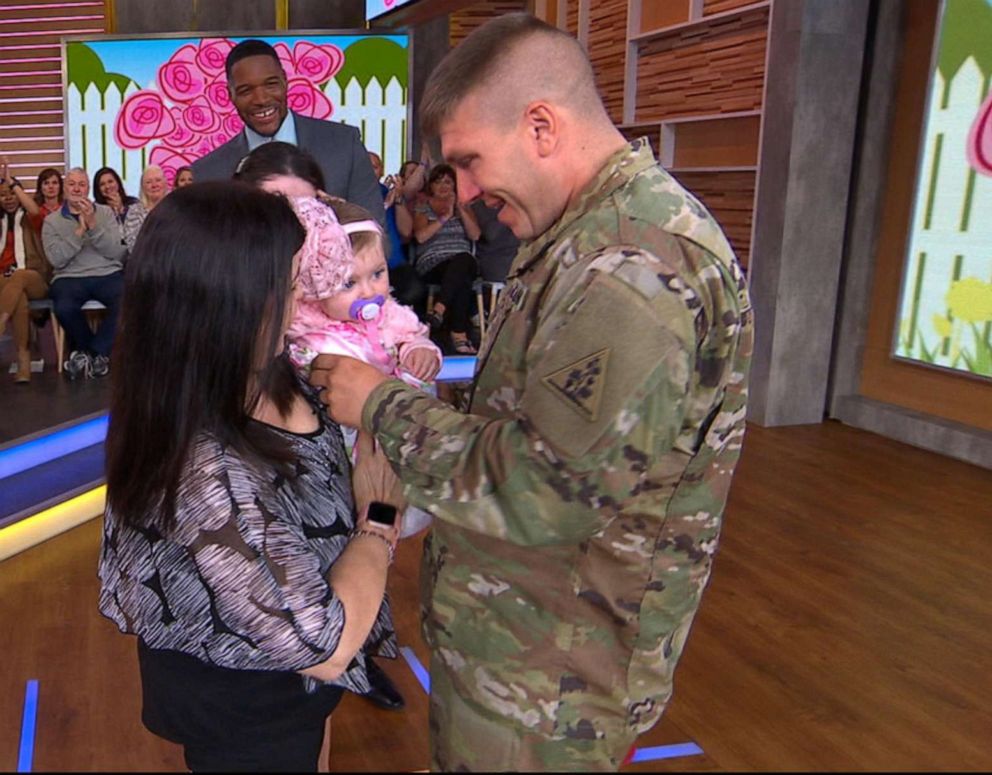 One year ago, Sarpu, a medevac crew chief for the National Guard, was called to serve in Iraq. At the time of his deployment, Whelan was six months pregnant with their first child.

"It's definitely tough to not know day to day ... and not really be able to understand where he is and what he’s doing," Whelan's best friend, Stephanie Fuschetti, told "GMA."

Her brother, Sean Whelan, added that the deployment was "definitely hard on her" at the time.

While her husband was away for the last trimester of her pregnancy, and then during the birth of their baby girl Savanna, Cassie Whelan's mom, brother and friends were there instead.

Say hello to my beautiful baby girl Savannah born August 22, and my amazing wife Cassie. I wish I could have been there with them it’s going to make deployment harder but I can’t wait to come back and hold them both and be with them all the time. I love you so much my angels be safe. Xoxoxo

After the birth, Cassie Whelan immediately put up pictures of Sarpu all over the baby's crib in the hospital.

"She wanted everyone to know who the father was, and she wanted Savanna to see him … even though she was just born," Fuschetti said.

Fuschetti added that facing motherhood by herself also made Cassie Whelan stronger, saying, "She made sure to jump right into it and devote everything to Savanna."

When, at just 4 months old, Savanna faced a medical crisis and her eyes became swollen shut, Cassie Whelan's brother Sean Whelan said, "I think that hit her the most with Josh not being there."

Still, "she just didn’t let it break her," he added, and Savanna ended up making a full recovery.

She also spent every day working to keep their daughter connected to her father, even while he's thousands of miles away.

These two make me so happy. I’ve been blessed with two angels in my life that always make me smile. I couldn’t imagine my world without them. Thank for always making me smile and happy. I love you both so much. Thank you Cassie for all the hard work you do and always being there for me and Savannah xoxoxoxoxo. I can’t wait to come home and hold you both ❤️❤️😍😘😍❤️❤️😍😘

She even plays back recordings of Sarpu's voice when Savanna cries, and it will often make her stop.

In honor of Mother's Day, Cassie Whelan's closest friends and family say they want her to know how proud they are of her.

"We're here for her and couldn’t be prouder," Sean Whelan said.

Fuschetti added, "I'm proud of Cassie cause she’s such a strong and independent mom."

"She and Savanna are two peas in a pod," she said.