When you reach for the skies, who do you bring with you?

For Capt. Holly Petitt, it's her daughter, First Officer Keely Petitt. The Petitts took off on their inaugural flight together on July 23 as Southwest Airlines' first mother-daughter pilot team in the airline's 55-year history.

"I just keep using the word 'surreal.' You have this little baby, you're holding her in your arms, and in a blink of an eye, there she is sitting on the flight deck next to you. It's been surreal and a dream come true," Holly Petitt told "Good Morning America."

Even though the 53-year-old pilot has been flying for Southwest for the last 18 years in a career that's spanned two decades, she readily admitted she still got nervous making her in-flight announcement on that memorable Saturday.

"I'm going to interrupt my normally scheduled briefing here for some exciting news. Today is a really special day for me," the older Petitt said in the announcement, in footage recorded and shared with "GMA" by Southwest. "I would like to introduce to you your first officer, a brand new member of the Southwest team of pilots, and my daughter, Keely Petitt. Keely, come on out here. So, thank you all for being here. This is a very exciting day for us, and for Southwest Airlines, a very special day. We are the first mother-daughter duo ever on the flight deck of Southwest Airlines. So thank you for being here."

"That was really fun to make that announcement and I was nervous for sure," Holly Petitt recalled to "GMA." "But it was just such a special moment. Words really can't do it justice, but it was a day full of joy." 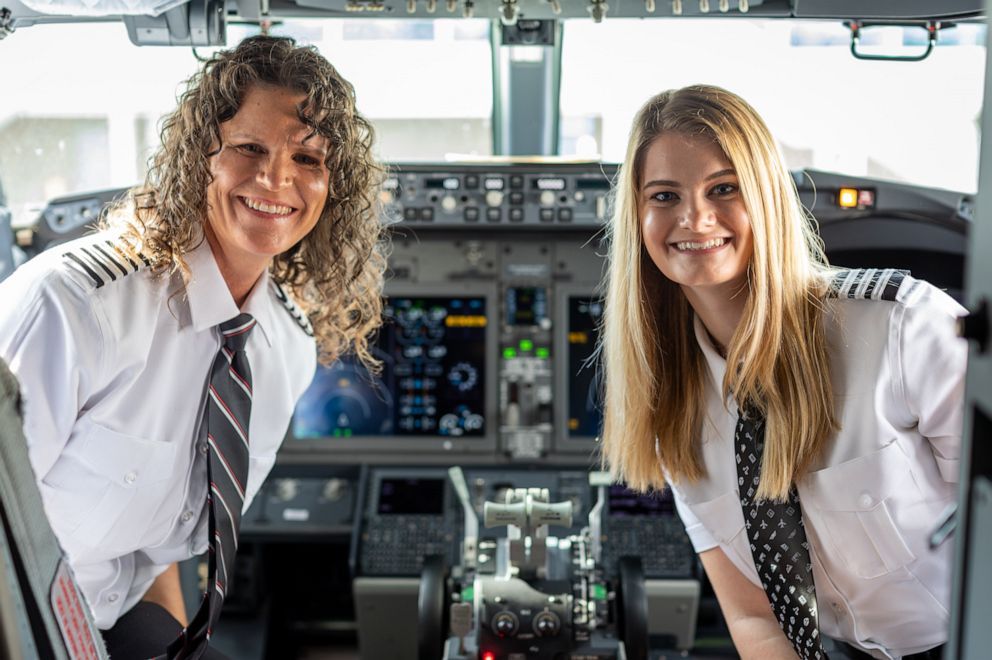 The Petitts took turns flying that Saturday, with mom Holly flying the first leg from Denver to St. Louis and Keely serving as co-pilot, before switching roles for their second leg from St. Louis to San Jose, California.

"My whole life, I knew I wanted to fly with my mom and it was just, like my mom said, it was so surreal and so incredible," Keely Petitt said of her experience. "As a kid, I always watched her do her job and be at work, but getting to understand it and see it all again, just the way that she shared our joy with her co-workers and the customers, it was just the perfect day. It was incredible. I could not be more grateful."

4:24
Capt. Holly Petitt and First Officer Keely Petitt became the first mother-daughter team to pilot a flight for the airline in July.

The 25-year-old followed in her mother's footsteps and has been a pilot for the last seven years. She joined Southwest this past May, returning to the airline after interning with the company while in college.

Both Petitts said flying for Southwest has been a dream come true.

"The people at Southwest, it makes the job even more special -- from our flight attendants to our ops agents to our ramp agents," Holly Petitt said. "You feel like you're with your family, even when you're away from home so we're really blessed in that sense."

Holly Petitt got her start in aviation as a flight attendant but one pivotal flight opened her eyes to her passion for flying.

"I got to sit in on the flight deck for a ferry flight and I just had an aha moment," Holly Petitt recalled. "I was like, 'This is it. This is what I want to do.' So I went out and started taking flight lessons." 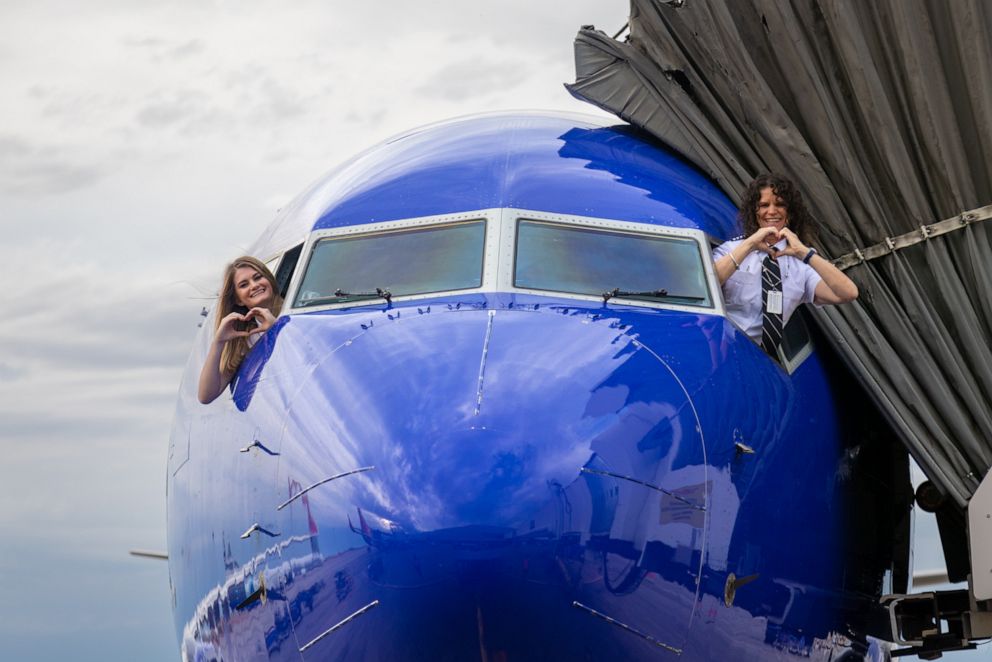 Southwest Airlines Co.
The Petitts say they love every aspect about flying, including the "amazing" people they get to meet and work with during their travels.

The mom of three credits her husband, mother and aunt for their unshakeable support while she pursued her dream, first while training and then while building and establishing her career from regional, commuter airlines to a major airline like Southwest.

"My husband would support me and he'd be like, 'You got this. We've come too far to turn back now. ... Let's do this.' So that was just perfect support at times I needed it the most and the kids were little during the commuter years," Holly Petitt said.

After all these years of taking to the skies, Holly Petitt said she still loves flying and it never gets old.

"The actual act of flying is fantastic. I've been doing it for 18 years at Southwest Airlines and I still get goosebumps. I still get giddy," she said. "This is the coolest job ever and it's never the same day twice at our office. Every day is unique and it's a fantastic job. Flying itself is incredible. Being 40,000 feet, from seeing trillions of stars at night and the full moons and all the sunsets and the sunrises, it's just an incredible view from the flight deck."

Keely Petitt said she fell in love with flying after she took an introductory flight, also known as a discovery flight, when she was 14.

"I just remember that first takeoff, like watching the ground get smaller and the sky get bigger, and it was just so incredible," she recalled. "I was like, 'I don't care what it takes. I don't care what I have to do to make this happen. This is what I want to do for the rest of my life.'" 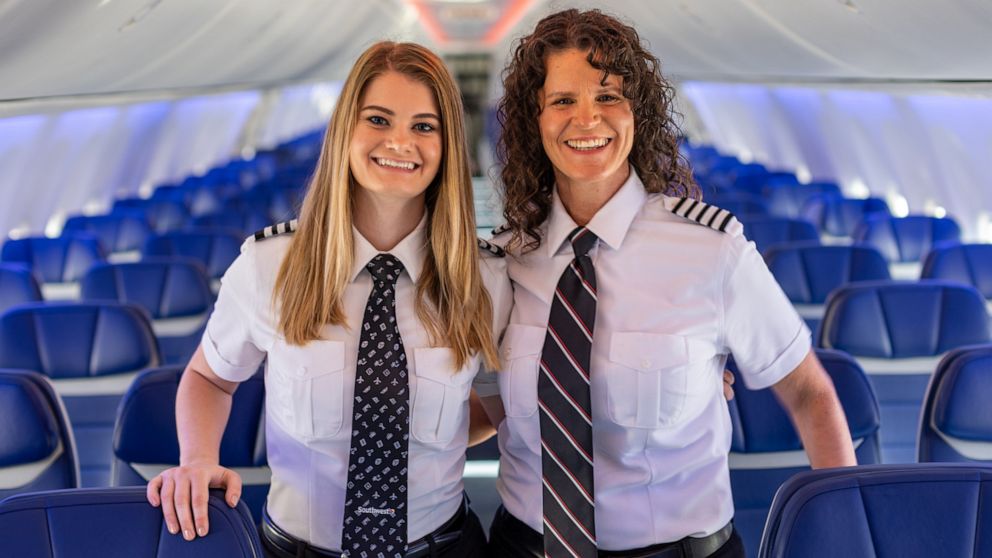 Her favorite part of flying?

"I love landing. It's just so amazing and so much fun," she said. "Watching crews interact and getting to take people safely from point A to point B is just an incredible experience and I just feel very fortunate that I get to do it."

As two female pilots in a male-dominated industry, the Petitts also know they're setting an example for young girls and teens, in the same way the elder Petitt was a role model for her daughter.

"On my last flight yesterday, I had a woman walking by to go take her seat and she was like, 'Yes, girl power!' so it's been really fun and really cool to just get to interact with people in that way," Keely Petitt said. 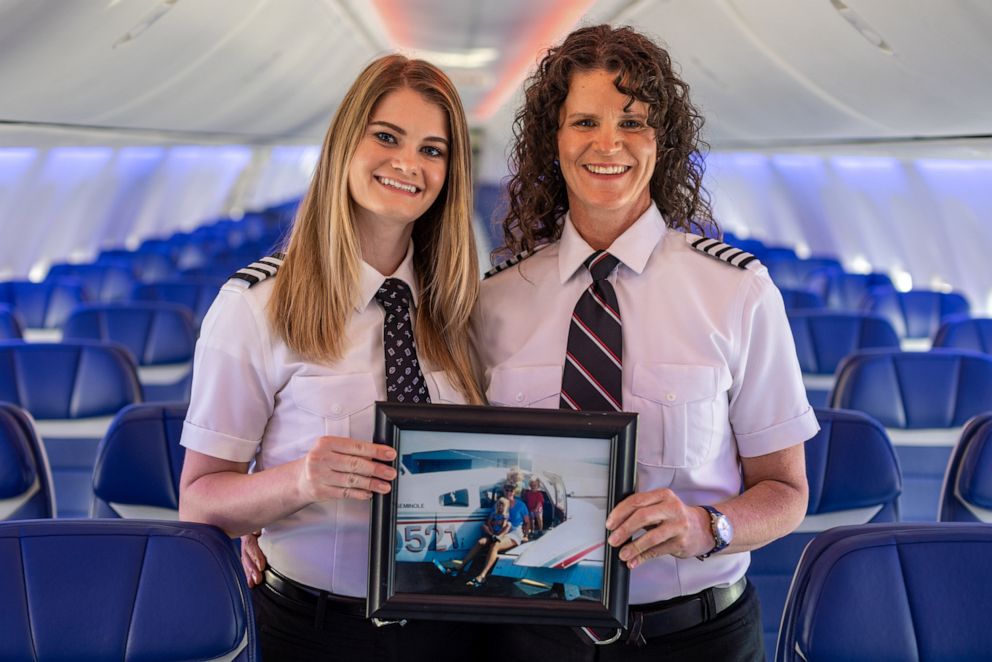 Southwest Airlines Co.
Captain Holly Petitt would take her three children, including Keely Petitt, to work with her when they were young.

Holly Petitt added, "I think the big reason there's not more female pilots is because of exposure. If you're not exposed to the industry, you just don't know it's an option and it's not male versus female. ... It's been really fun for me to be able to provide that exposure for little girls. They just come up all excited. They sit in the flight deck with you, they get to push some buttons and get all excited."

The Petitts said their message for young, aspiring pilots is to reach for the skies.

"If you find aviation is your passion, go for it. It's doable no matter what your circumstances. Just put one foot in front of the other and keep working towards your goal, even with little kids in tow," Holly Petitt said. "It's a phenomenal experience from point A to point Z so just live your dream."

"If you love it, then you can absolutely achieve it," Keely Petitt added. "It's such an incredible career."

In the meantime, Keely Petitt said she can't wait to fly with her mom again.

"It was just so awesome and so much fun. So I don't care where we go or when we do it, but anytime we would get to fly together again would just be spectacular," she said.