Between 2019 into 2020, reports of women binge drinking rose amid the COVID-19 pandemic -- now many, particularly mothers, say they're reevaluating their relationship with alcohol in hopes to put an end to a hazardous health trend.

In 2019, Lainy Warnecke made it 47 days without having a drink after becoming "sober curious."

She said she eventually went back to consuming alcohol in moderation, though when the pandemic hit, the mother of two found herself pouring a drink every single day as she worked a full-time job remotely along with having her kids out of school.

"It was a stress unlike any that I'd ever experienced before," Warnecke of McKinney, Texas, told "Good Morning America." "I used to tell my manager who I worked for at the time, 'It's not the kids and it's not the work. It's that everything is going on at the same time.' You didn't have, 'It's the end of the day.' [Instead], you had everything coinciding."

In a study released in September by the RAND corporation and supported by the National Institute of Alcohol Abuse and Alcoholism (NIAAA), adults' drinking habits were compared from 2019 to 2020. Surveying 1,540 adults, participants were asked about their shift in consumption between spring 2019 and spring 2020, during the virus' first peak. 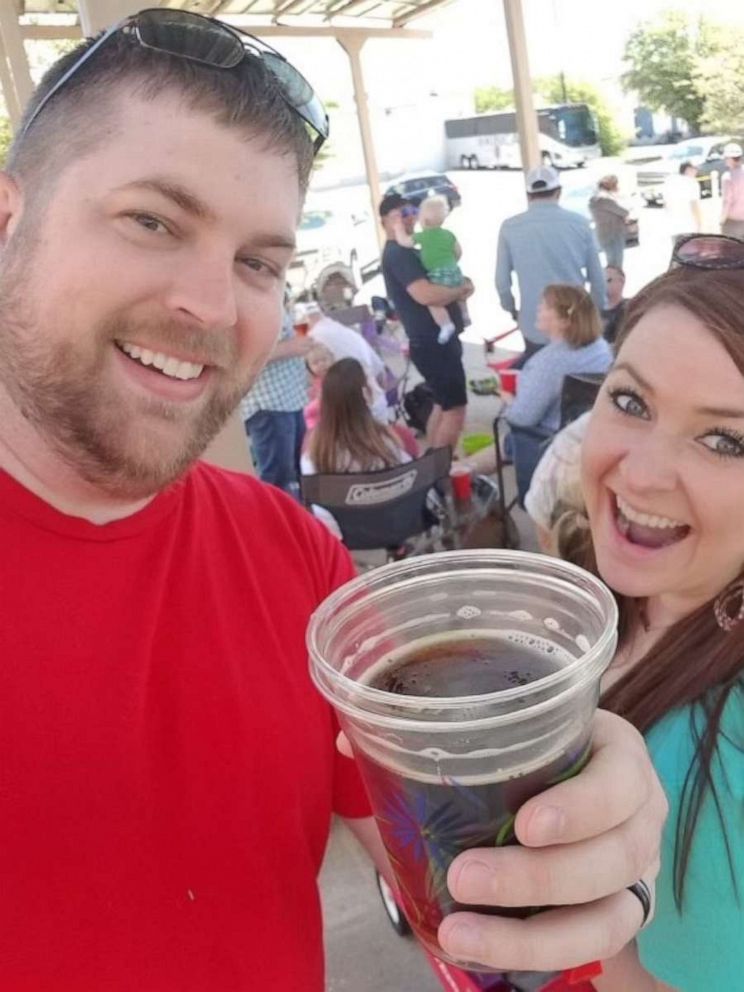 It was everywhere. It was in all the memes, social media.

"It's been a hard year and we know that in our culture at baseline--even before the pandemic--the emotional load of domestic duties and the emotional well-being and care-taking of a family disproportionally falls on moms," reproductive psychiatrist Dr. Alexandra Sacks told "GMA."

Why drinking to self-medicate will backfire

While a glass of wine may feel like an escape, Sacks points out that biochemically, alcohol is a depressant.

"It ultimately does affect your brain chemistry to lean towards the balance of neurotransmitters that lead to feelings of depression. So, that's the No. 1 reason to not drink as a way to feel better when you're anxious or depressed," Sacks said, adding that alcohol will worsen your symptoms of anxiety and depression.

Alcohol can also negatively affect sleep quality, which makes it more difficult to deal with stress, according to the Centers for Disease Control and Prevention.

For Warnecke, she said she'd often wake up not feeling well and or guilty about having drinks the night before. 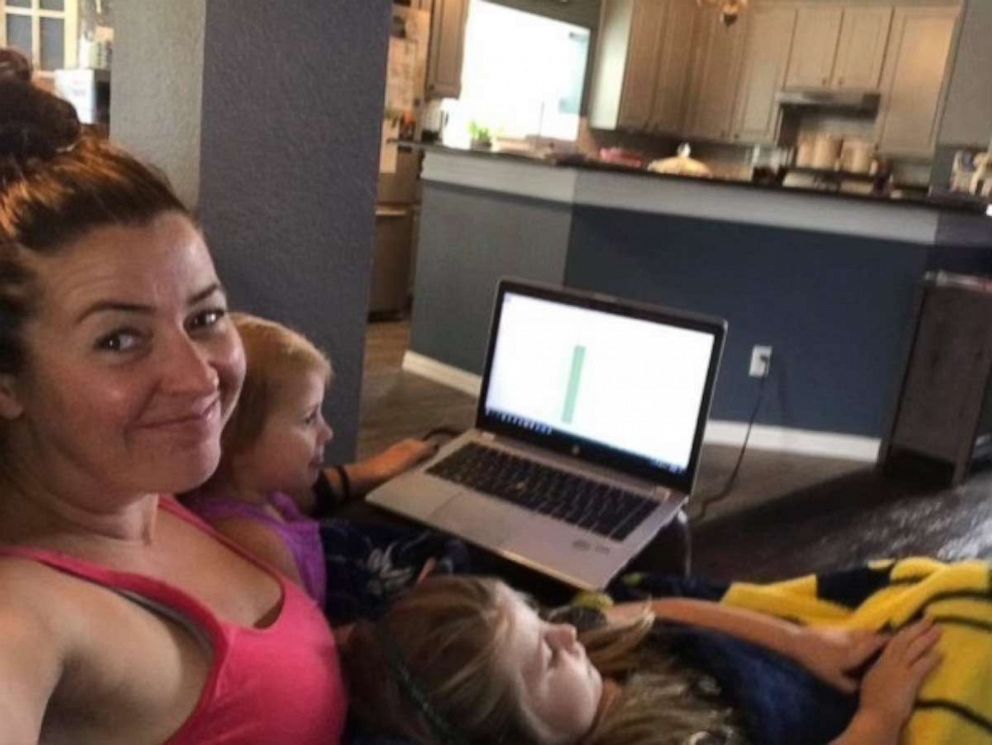 Lainy Warnecke,
Lainy Warnecke, a mother of two from McKinney, Texas, quit drinking alcohol in August 2020. She is now a member of Sober Mom Squad, a supportive community for women who are exploring their relationships with alcohol.

"It was everywhere. It was in all the memes, social media," Warnecke said. "Friends were like, 'Grab a glass of wine and call me.' As if we didn't have enough with the whole mommy wine culture in [our faces]."

Warnecke said she began pouring drinks earlier. Sometimes she'd have an extra glass, or take a walk with an insulated cup containing a cocktail.

"Just all the ways alcohol could start to infiltrate your life when you're living in a pandemic that you've never expected to live in," she explained. "It still seems unreal."

"I have no desire to go back there."

Her advice to women exploring sobriety is it's the "best thing" you'll ever do.

"I don't like the person that alcohol made me," she said. "I finally know who I am and I am the best version of myself that I could've imagined and I have no desire to go back there."

Days after putting down the bottle, Warnecke listened to a podcast featuring a guest speaker named Emily Paulson. 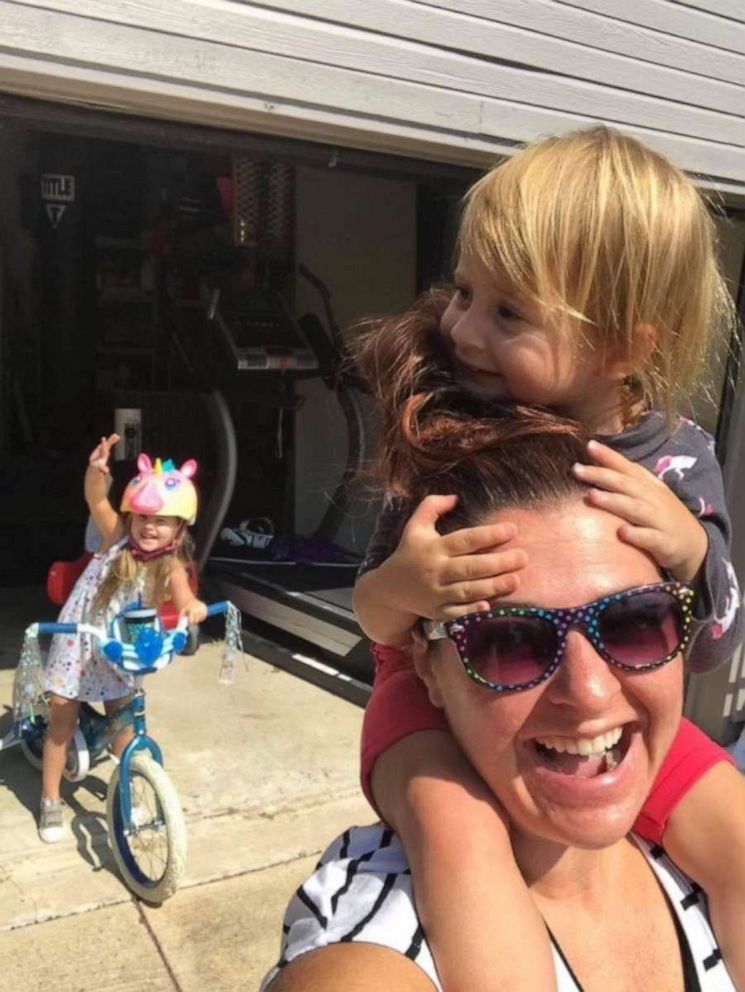 Lainy Warnecke
Lainy Warnecke, a mother of two from McKinney, Texas, quit drinking alcohol in August 2020. She is now a member of Sober Mom Squad, a supportive community for women who are exploring their relationships with alcohol.

Paulson, a mother of five from Seattle, has been a certified recovery coach for three years and sober for four-and-a-half.

Paulson told "GMA" that she suffered postpartum anxiety and depression for many years, and alcohol contributed to her anxiety. After she had her fifth child, her drinking became more frequent.

It was this mommy wine culture, (saying) you really have to drink to be a parent.

"It was this mommy wine culture, [saying] you really have to drink to be a parent," Paulson said. "I said, 'I haven't had a DUI yet, I haven't had health problems yet' and once I did, I knew I had to stop. I had to get help."

Paulson said she faced health issues such as poor liver enzyme levels and had been hospitalized for drinking too much.

In June 2016, Paulson was charged with a DUI. Still, she said, she continued to drink. 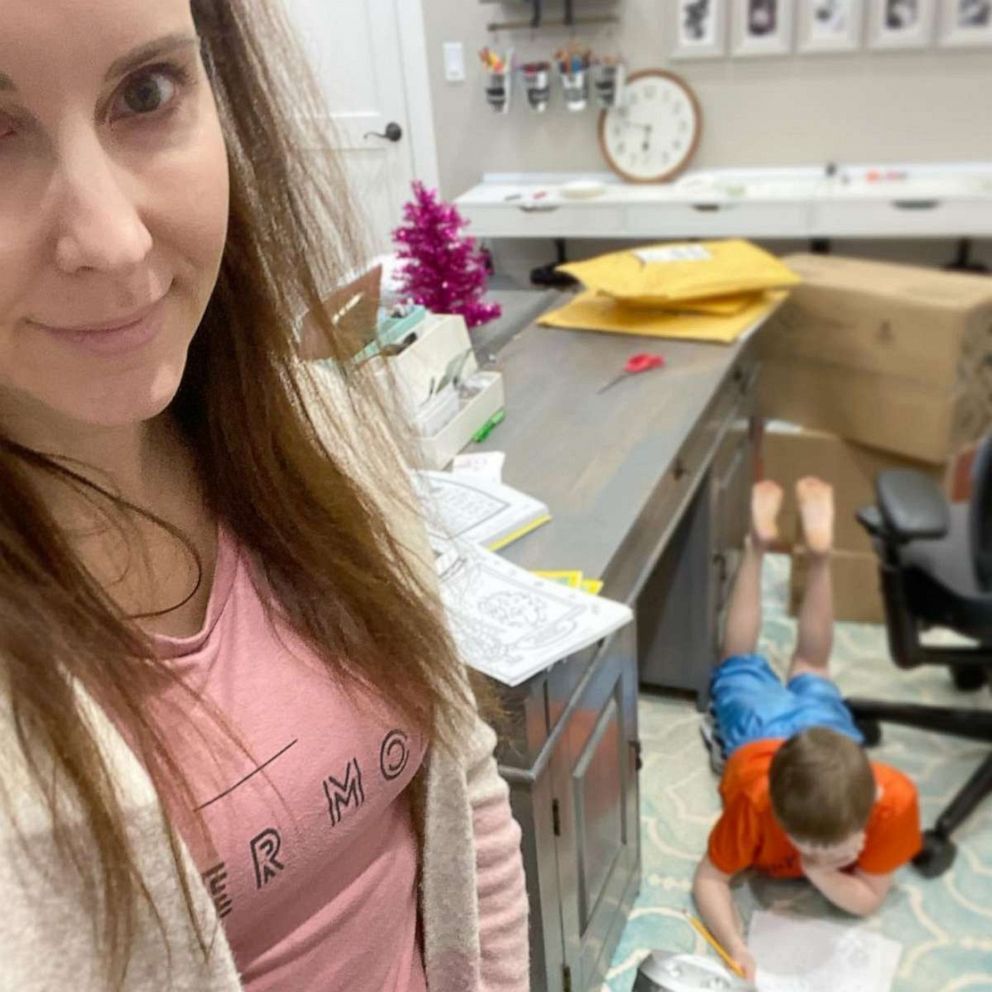 Emily Paulson
Emily Paulson of Seattle, Washington, is the founder of Sober Mom Squad, a supportive community for women exploring their relationships with alcohol. Paulson is a mother of five, a recovery counselor and has been sober for nearly five years.

"I was still in denial," Paulson said. "When they asked, 'How many drinks do you have per week?' I wasn't honest because when I added it up, it fully scared me."

When they asked, 'How many drinks do you have per week?' I wasn't honest because when I added it up, it fully scared me.

Paulson said she was drinking a bottle of champagne a night.

After the DUI charge, Paulson attended court-appointed counseling and had a breathalyzer device wired into her car, which wouldn't allow the car to start unless she gave a breath sample. 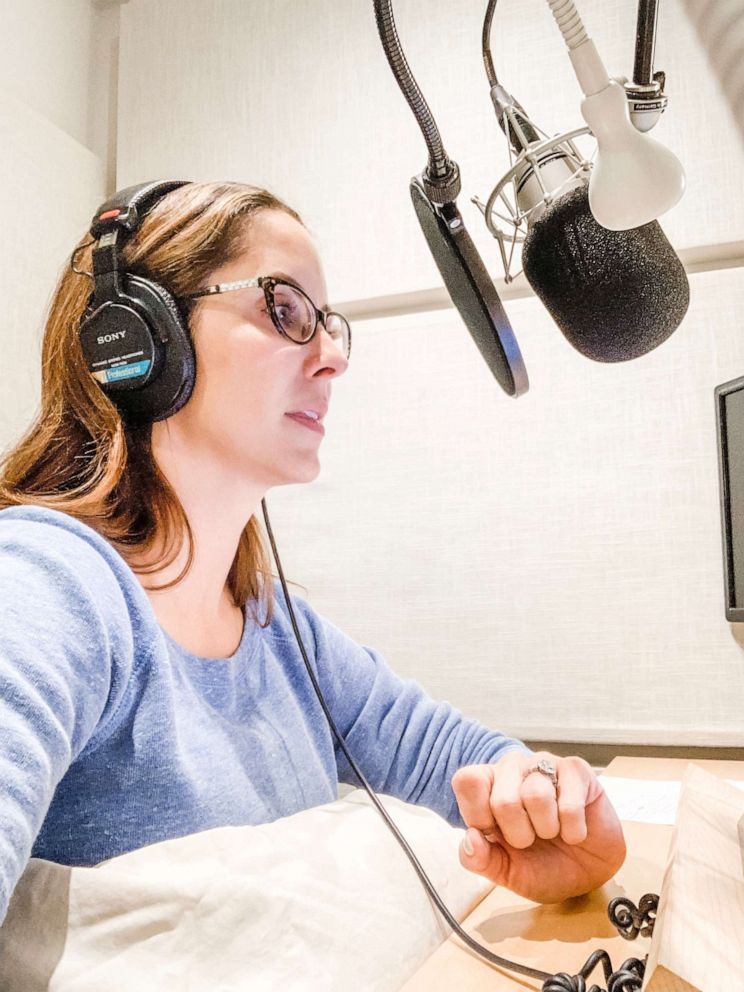 Paulson said the DUI and health issues pushed her to sobriety. She started attending Alcoholics Anonymous meetings, saw a therapist and read about the science behind alcoholism.

"It was mostly people like me who had a long history of drinking, and had consequences," Paulson said.

"When the pandemic hit, the women I was hearing from [said], "I never questioned my drinking. Now I'm home with a kid, working from home, I'm stressed and I have all these Zoom calls with 'quaran-tinis' and they're pressuring me to drink more," she added. "I was hearing from women who never drank this much before and they're getting scared."

I was hearing from women who never drank this much before and they're getting scared. 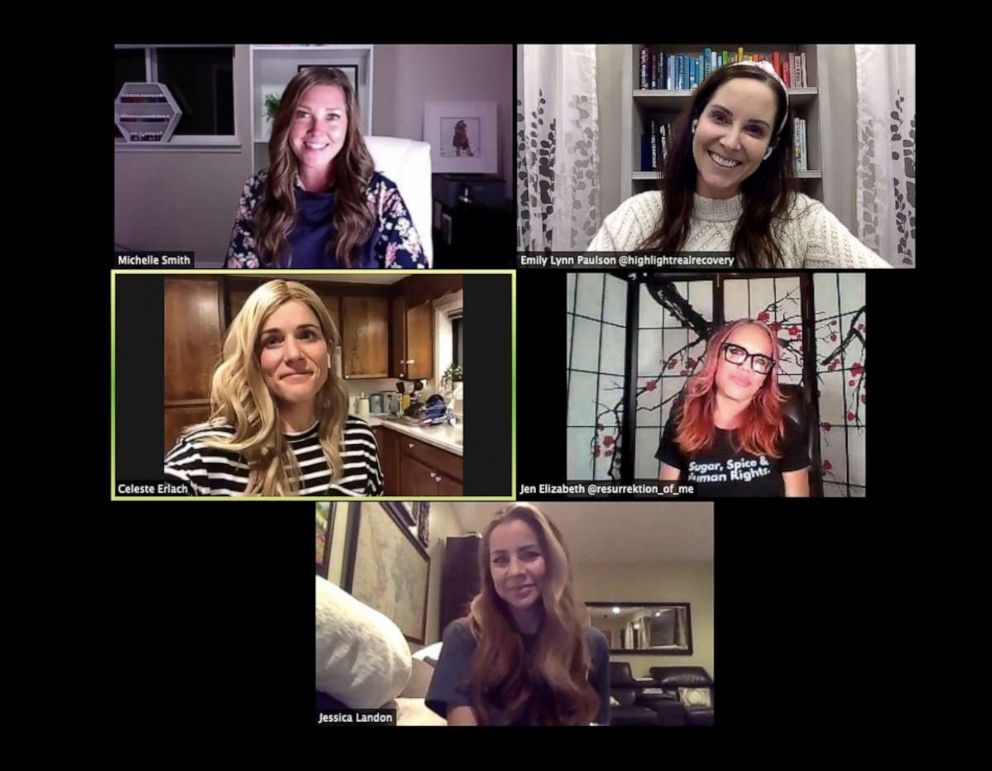 Paulson said she noticed a trend, so she gathered other women who work in recovery.

From there, Sober Mom Squad was born--and its community quickly grew amid COVID-19 with roughly 3,000 women signing up for free virtual meetups each Wednesday.

Paulson and her team also offer membership packages, which include 25 meetings a week, webinars on various parenting topics featuring expert speakers and group coaching where moms can submit questions related to recovery.

"It's a place women could go, have your camera off and just listen," Paulson said. "Opening that door to A/A is like 1,000 pounds if you're not ready for it."

If you're questioning your relationship with alcohol

Paulson offered tips for anyone, especially mothers, who are exploring sobriety or wondering if they're drinking too much.

Before a mindless pour, ask yourself, "What am I feeling?"

Channel the feeling beneath the urge to drink. Paulson said to instead explore these feelings through therapy. If it feels daunting or you can't attend face-to-face sessions, try an app that provides mental health and mindfulness support.

Change up the habit or routine

If at 5 o'clock you have wine while cooking, swap with a non-alcoholic drink. "Maybe you just needed something in your hand," Paulson said.

Set a timer for 20 minutes before reaching for booze

"The craving usually passes," Paulson said. "There's a science behind it."

Replace drinking with another activity

Find something in its place, like taking a walk or yoga. It's all about mindfulness.

Ask a friend to tackle a "dry" challenge with you

A partner will help you have accountability. Setting short, little goals can be telling.

See what works for you. For some, A/A is all they need. Others don't feel they connect with it.

"It's information, it's science, it's non-judgmental," she said. "It can really help re-frame your belief about alcohol. That's usually the first thing I tell my clients." 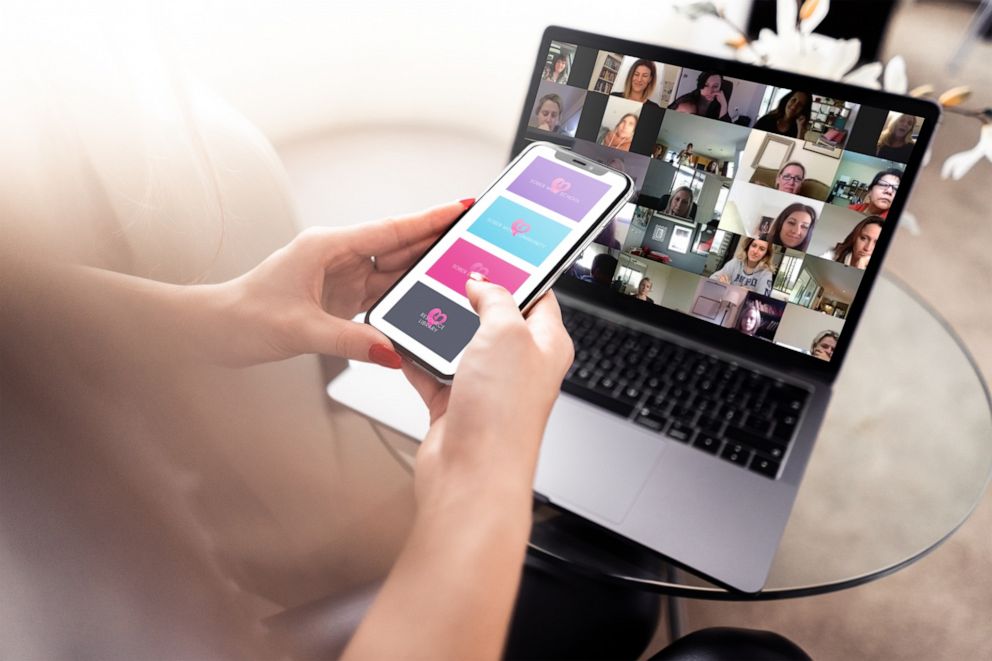 Unpacking the emotional load for mothers

With women being hit hard while they balance family and career amid the pandemic, Dr. Sacks said the U.S. needs family-friendly policies for both women and men.

"And we need to work on equal distribution of domestic roles within the home," Sacks said. "So, encouraging fathers to step up in childcare, but also supporting initiatives like parental paternity leave to sort of help encourage families to think in a balanced way." 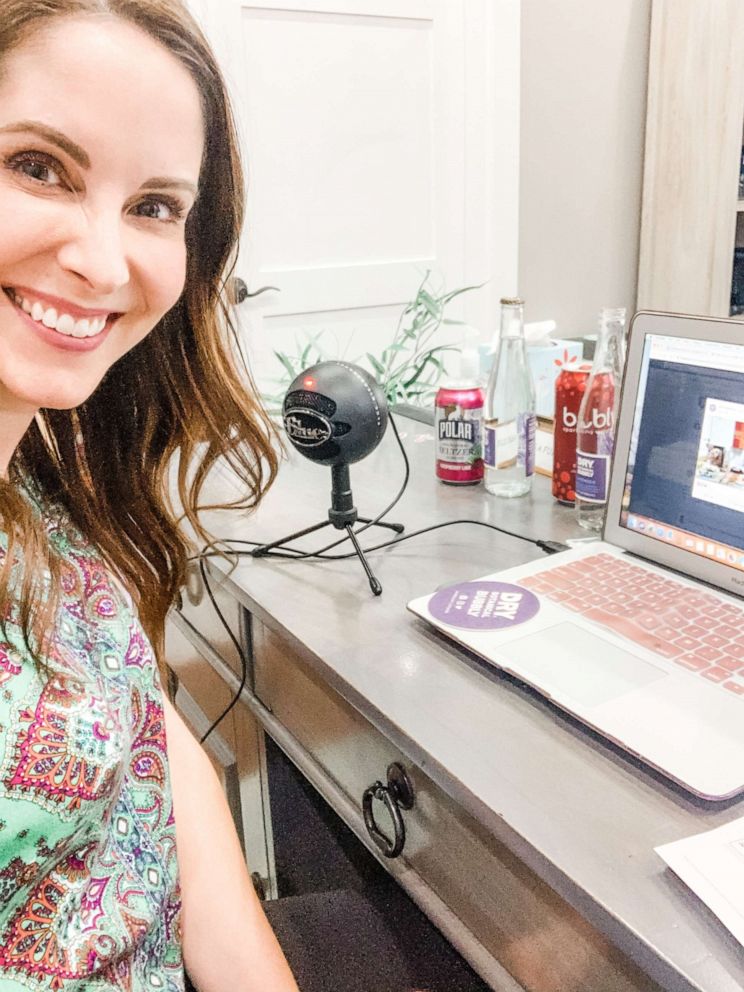 Emily Paulson
Emily Paulson of Seattle, Washington, is the founder of Sober Mom Squad, a supportive community for women exploring their relationships with alcohol. Paulson is a mother of five, a recovery counselor and has been sober for nearly five years. The community quickly grew amid COVID-19 with roughly 3,000 women signing up for free virtual meetups each Wednesday.

This includes meditation, deep breathing, acupuncture and education on the importance of sleep.

Friends and/or a community online with other moms

Talk with your partner or loved ones for help with childcare, and be honest about what you need.

"Don't feel guilty about giving your kids the iPad [in moderation] so you can enjoy a meal," Sacks said.

Exercise and get healthy nutrition

Get fresh air, even if it's a walk outside with the stroller

Finding a guilty pleasure that's not self-sabotagingThink of another way to indulge that omits alcohol. Watch a show or take a bath. Do anything special that isn't going to be harmful to your health.

Speak with a professional
If you're not sure what you're experiencing is anxiety, depression or an alcohol problem, chat with your doctor about seeing a therapist or reach out to the Postpartum Support International helpline at 1-800-944-4773.

Instead of normalizing going out for drinks when you're feeling stressed, flip that with talking to a therapist.

If you or someone close to you needs help for a substance use disorder, call the Substance Abuse and Mental Health Services Administration (SAMHSA) National Helpline at 1-800-662-HELP (4357) or visit FindTreatment.gov, SAMHSA’s Behavioral Health Treatment Services Locator.