In 2017, Celeste Yvonne's day began with sending her kids off to school and heading to the office -- usually with a mild hangover.

Around dinnertime she'd pour her first glass of Cabernet, and once her little ones were in bed, it was certain she'd finish the rest of the bottle.

That was then. Today, Celeste has been sober for more than 500 days and is open about it in her blog.

"I was very much entranced by the mommy wine culture, and I used that culture to self medicate," said the mother of two from Reno, Nevada, who requested "Good Morning America" uses her pen name. "I needed an outlet and I needed a way to escape. It seemed like a perfectly healthy and almost chic way to decompress. I knew a lot of my friends were doing the same thing.

"Society has very much normalized it, and that's how I managed to justify drinking a bottle of wine a night."

(MORE: When mother doesn't know best: The ferocity of overparenting in the midst of the college cheating scandal)

The Dietary Guidelines for Americans defines moderate alcohol consumption as having up to one drink per day for women and up to two drinks per day for men, the Centers for Disease Control and Prevention reports.

But many women are admittedly consuming more. And like Celeste, they're speaking out on the trend of moms pouring a glass or two or three to help cope with family life -- and how they've dialed it back or altogether nixed their drinking habits. 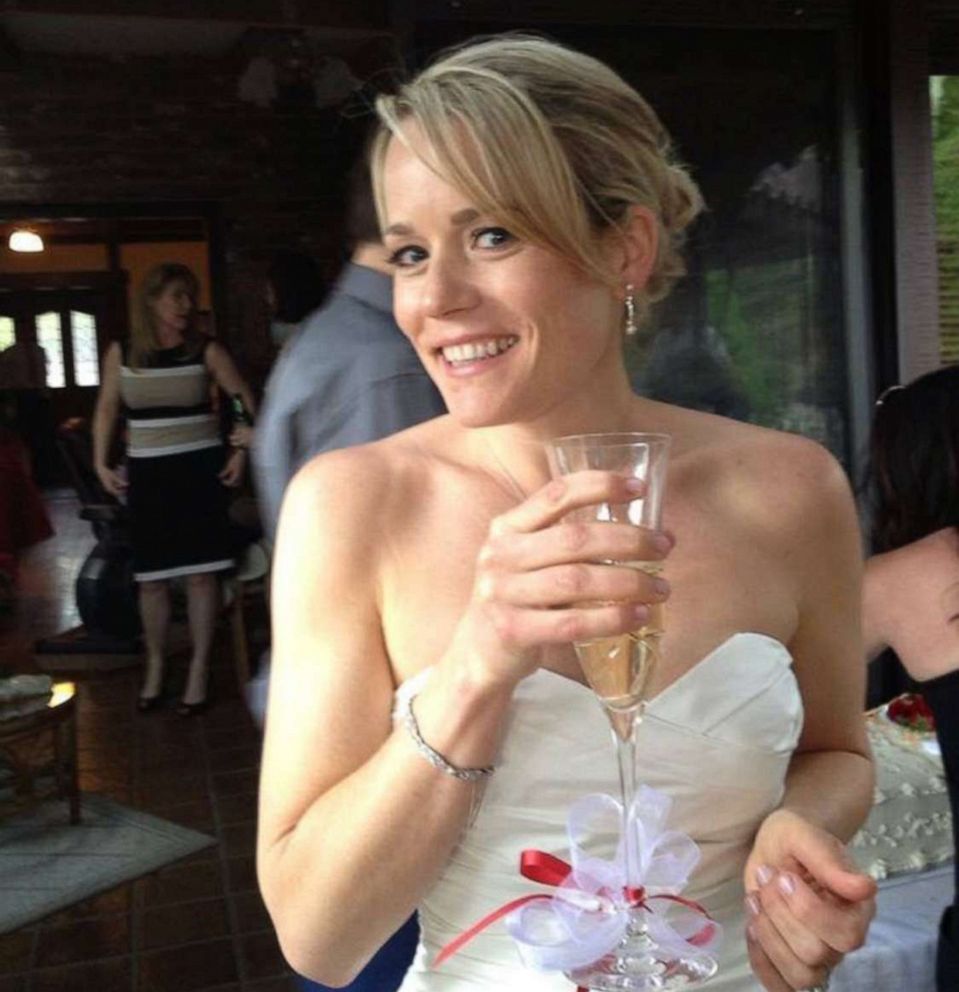 Courtesy Celeste Yvonne
Celeste Yvonne, owner of the blog, andwhatamom.com, is a mother of two from Reno, Nev.

'They whine, we wine'

Regardless of public health guidelines, marketers are targeting mothers to drink.

And who can say no to vino when it's so lovingly held in a goblet that reads "Mommy's Medicine" or "I've waited 9 months for this" -- not to mention fun-poking #mamaneedsadrink memes and the gamut of handmade Etsy products proclaiming women are "surviving motherhood one bottle at a time."

"At some point, though, all the jokes about 'mommy juice' and 'wine o'clock' stopped being all that funny and relatable and started feeling awkward; and it's only just recently that I've started to see why: they were ringing a little too true," journalist Sarah Cottrell, of Maine, wrote in a 2018 Babble.com article.

Society has very much normalized it and that's how I managed to justify drinking a bottle of wine a night.

Cottrell, a mom of three who wrote "How mommy drinking culture has normalized alcoholism for women in America," told "GMA" she was one of those moms creating and sharing mommy wino memes.

"I think that there is a time for every trend to have its moment [to] shine and become shareable and clickable, and I think it's really great that this is the moment that we are collectively asking ourselves, 'How much wine is too much?' and, 'Is it really funny to laugh at that to begin with?'" said Cottrell, adding that she quit drinking for an extended period to explore her relationship with alcohol. 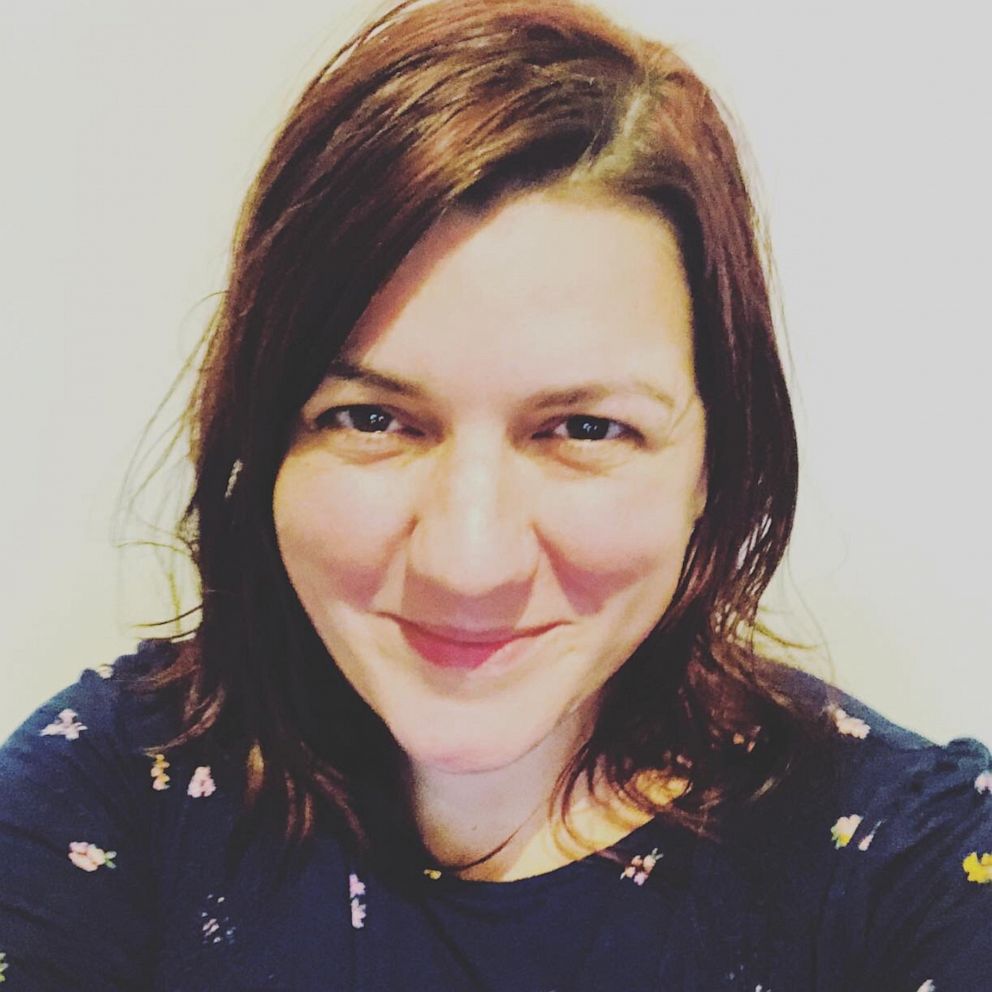 Courtesy Sarah Cottrel
Sarah Cottrel is a journalist and a mom of three children who resides in Maine.

The Instagram page "Mommy's Wine Time" has 124,000 followers unapologetically sharing their affinity for booze -- especially the whites and the reds many moms are most frequently pouring.

In her article, Cottrell addresses how mothers drinking wine is more accepted over the use of other stimulants: "Imagine if I began this essay by saying that I took a shot of tequila or smoked a joint every afternoon while my son was across the room eating his afternoon snack? I'd have an inbox full of hate mail before you could even finish this sentence. But no one bats an eye at day-drinking red wine. After all, it's 'good for my heart.'"

(MORE: This teacher created a mental health check-in chart for her students and now teachers around the world are doing the same)

"Part of the culture of drinking wine is that women are told -- by the science community, the wine industry and social media influencers -- that wine is healthy and classy," Cottrell told "GMA." "In that respect, I think it is fair to say that to some extent drinking wine -- even regularly -- as a mom is kind of a status symbol. When we think of moms who drink, we think of upper-middle-class white moms in suburbia, and isn't that in alignment with the American dream?" 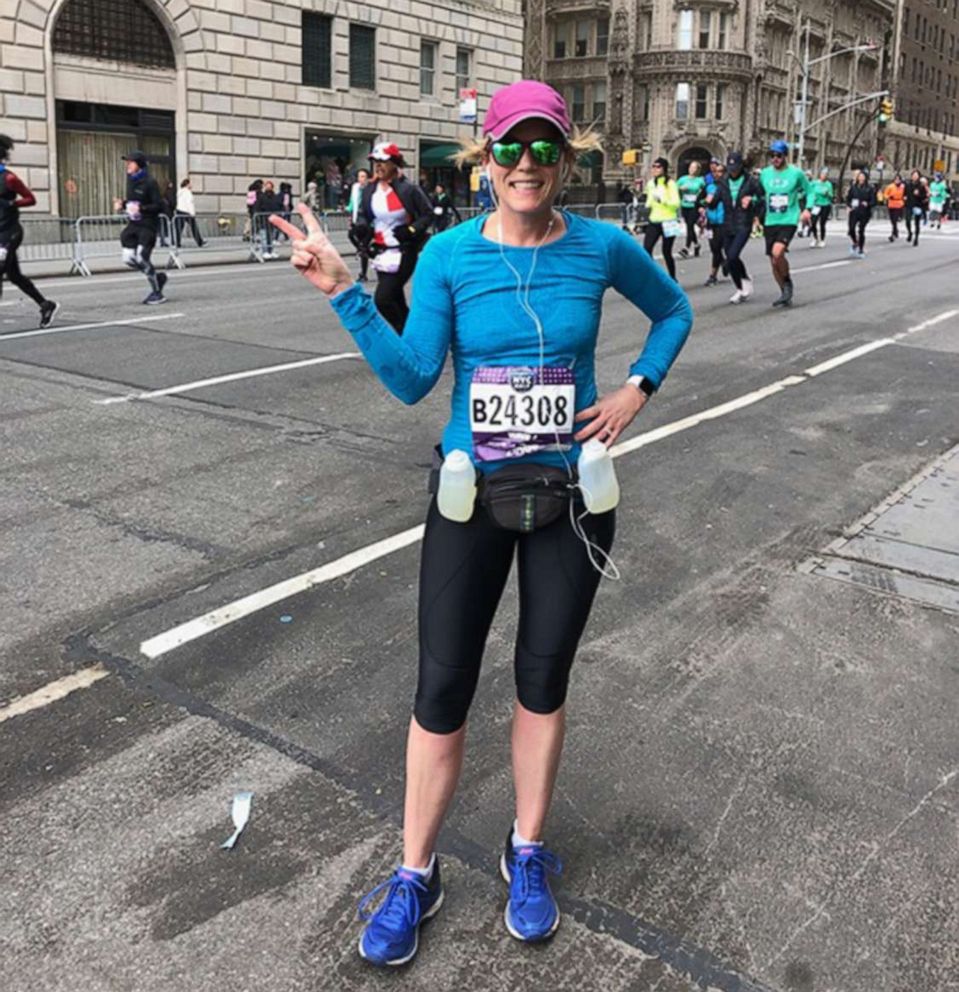 Both Cottrell and Celeste agree: Moms may turn to the bottle when their "mental load" becomes overwhelming.

"It's being responsible for everyone's calendars, for all the chores ... it's trying to figure out how to schedule my work around family, my family around work, and be good at both," Celeste said. "It felt like I was failing ... and at the end of the day when everyone survived, I felt like I deserved that wine, the chance to decompress, and that I had earned it that night."

A shift against wine mom culture

In January, actress and mother Anne Hathaway opened up during an interview with Ellen DeGeneres about a night out with Matthew McConaughey and his wife, Camila Alves, while filming a movie on the island of Mauritius.

Hathaway recalled a hungover meeting with their director the next day, which is one of two reasons why she gave up drinking in October. She told DeGeneres that she plans on steering clear of alcohol for the next 18 years.

"I'm going to stop drinking while my son's living in my house, just because I don't totally love the way I do it," she said. "He's getting to an age where he really does need me all the time in the morning."

Celeste's reasons for ditching drinking were similar to Hathaway's. 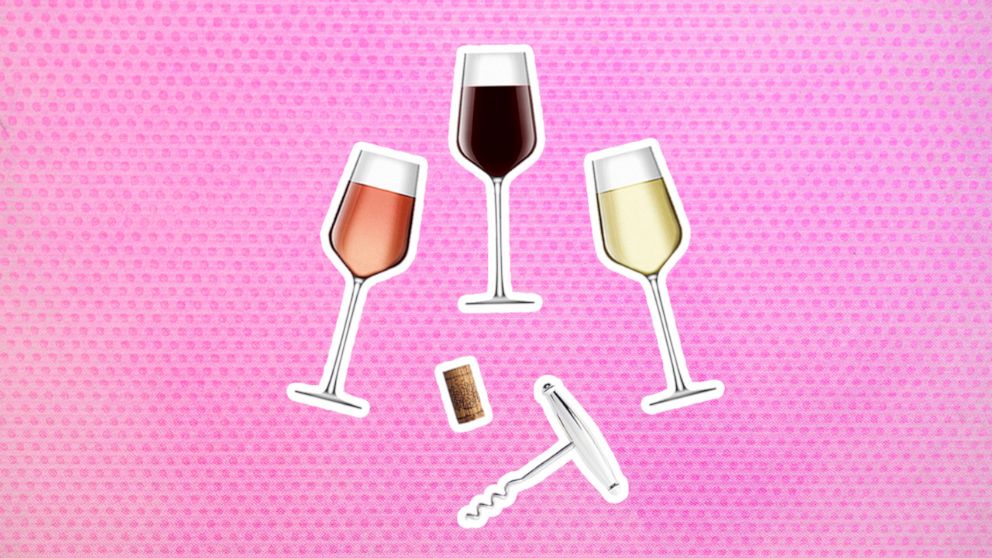 I remember thinking, 'Oh my God. Is this how they're going to remember me? With a drink in my hand?

While Celeste has vowed she'll never drink again, more moms are reevaluating their relationships with alcohol -- like Cottrell and Ashley Abramson from Minneapolis, who now enjoys the occasional glass of wine.

Abramson authored the 2018 buzzed-about Washington Post article, "The cheeky 'wine mom' trope isn't just dumb. It's dangerous." -- wherein she argues how the glorification of binge drinking could be a threat to mothers.

"One night, when my son was about a year old, I drank so many margaritas I spent the whole next morning throwing up," Abramson writes. "With my puffy, green face pressed against the toilet seat, I realized I was using so much energy figuring out how to escape that I had accomplished the opposite."

"I was trapped in a dangerous cycle," she continued. "Desperate for a way out, I contacted my therapist, who recommended I consider increasing my anti-anxiety medication dosage -- and, more importantly, helped me to see that to be the mother I wanted to be, I had to mother myself."

Abramson, a mom of two, told "GMA" that alcohol masked her actual needs and emotions. 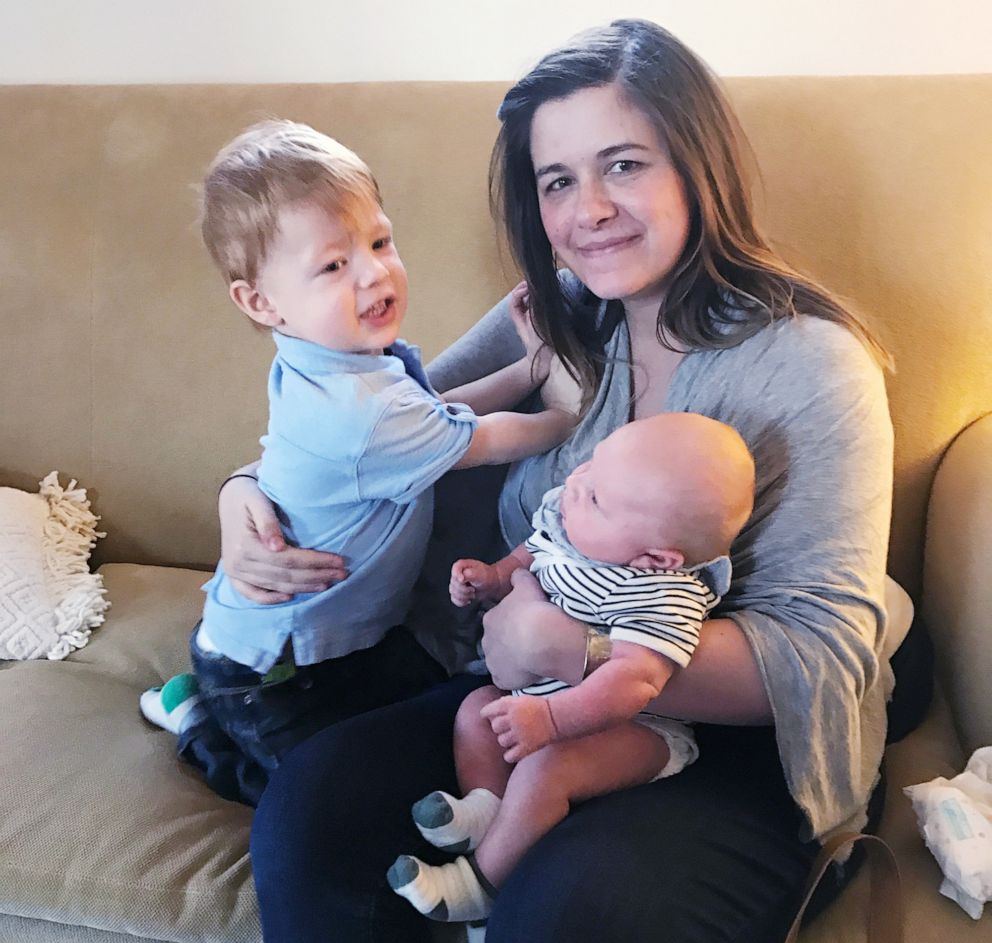 Courtesy Ashley Abramson
Ashley Abramson, a mom of two from Minneapolis, is seen in this undated photo with her sons, Oliver, 4, and Miles who is now 2.

She went on: "Motherhood is hard and it's much easier to escape instead of deal with it -- especially if you don't have the resources."

What do moms really need?

Abramson now sees a therapist twice a month. She also connects with moms who are stressed and overconsuming alcohol -- something a wine meme can often make light of.

"I think these mommy-driven jokes about moms is a way in pop culture to talk about stress that's less shameful," said Sacks, co-author of "What No One Tells You: A Guide to Your Emotions From Pregnancy to Motherhood" and the host of "Motherhood Sessions," a podcast from Gimlet Media. "We need to do a better job to step up as educators and experts to provide tools."

In addition to stress, Sacks said the identity shift of being a new parent can have parents turning to alcohol. But rather than reducing stress, Sacks warns that it can actually increase the anxiety and depression a new mother is facing -- especially due to the hormonal shifts during the postpartum stage, she said. 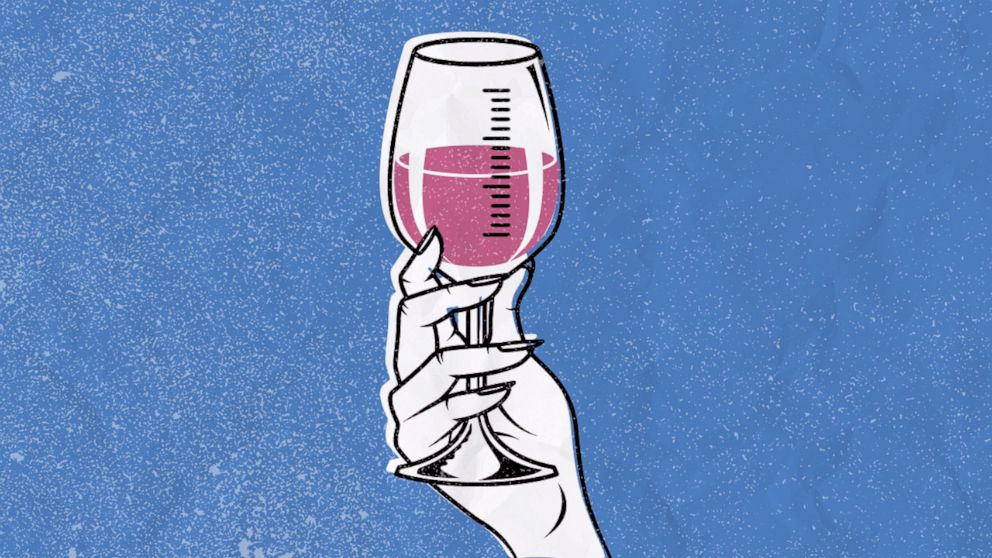 Drinking covered up the problem. I was trying not to feel the uncomfortable feelings that came with motherhood and in turn, I was not able to grow.

Friends and/or a community online with other moms

Share the loadTalk with your partner or loved ones for help with childcare, and be honest about what you need.

Set a realistic bar"Don't feel guilty about giving your kids the iPad [in moderation] so you can enjoy a meal," Sacks said.

Exercise and get healthy nutrition

Get fresh air, even if it's a walk outside with the stroller

Hold on to the things you love to doTry to carve out time to reconnect with the activities you did before you became a mom -- even if it's as simple as watching your favorite TV show.

Speak with a professionalIf you're not sure what you're experiencing is anxiety, depression or an alcohol problem, chat with your doctor about seeing a therapist or reach out to the Postpartum Support International helpline at 1-800-944-4773, Sacks said.

Editor's note: This article was originally published on April 29, 2019.